The major US indexes finished slightly higher on Monday, but it was a very quiet and uneventful session with little in the way of news flow and market catalysts.  The Dow led the way, lifting 0.27% with the S&P500 up 0.09%, with this being the 8th straight gain. The tech-heavy Nasdaq closed up 0.11% while the Russell2000 came close to breaking through to new all-time highs.

The S&P500 has risen 5.7% from the low point of the Feb/March corrective selloff and appears to be now in need of a catalyst to maintain momentum and take out the record highs. But sellers are getting harder to find with the market focused on valuation support and the prospective PE multiple for the S&P500 at just 16X.

Trade tensions with China and the Trump Administration are still simmering in the background and this was highlighted on Monday when the President tweeted about the latest skirmish on ZTE. Other media reports surfaced on Bloomberg of a potential trade deal, but nothing concrete has emerged.

Technically the price action on the Russell 2000 was interesting with the all time record highs “tested” and nearly broken on Monday. We have now seen the key 1600 level tested on three occasions so far in 2018 with each successive pullback being shallower. This is positive price action for what is becoming a broad-based rally in US stocks and demonstrates that the overall recovery (since the Feb/March correction) has “breadth” in the markets.

When bull markets expire they typically have a “narrower” field of stocks with breadth giving way to a smaller group of leaders, with the broader market generally falling away. So this is good news for the bounce in the US markets. I think not only will the Russell 2000 make new highs in the next few months, but it seems to be leading the major indices on the upside. The question still remains however – what is going to be the catalyst that “breaks the Russell 2000 through to the other side”?

Disney shares ticked up 0.4% as its Marvel blockbuster Avengers: Infinity War had a very strong launch in China. More on that later. Shares of online search giant Baidu advanced 0.9% to hover around new all-time highs. The stock benefited from the potential thawing of US-China trade relations, Google’s recent AI demonstrations and a surge in shares of its video streaming spin-out, iQiyi.

Baidu – one of the top 5 positions in the Fat Prophets Global Contrarian Fund – has broken out to the topside and is on the cusp of making new record highs. 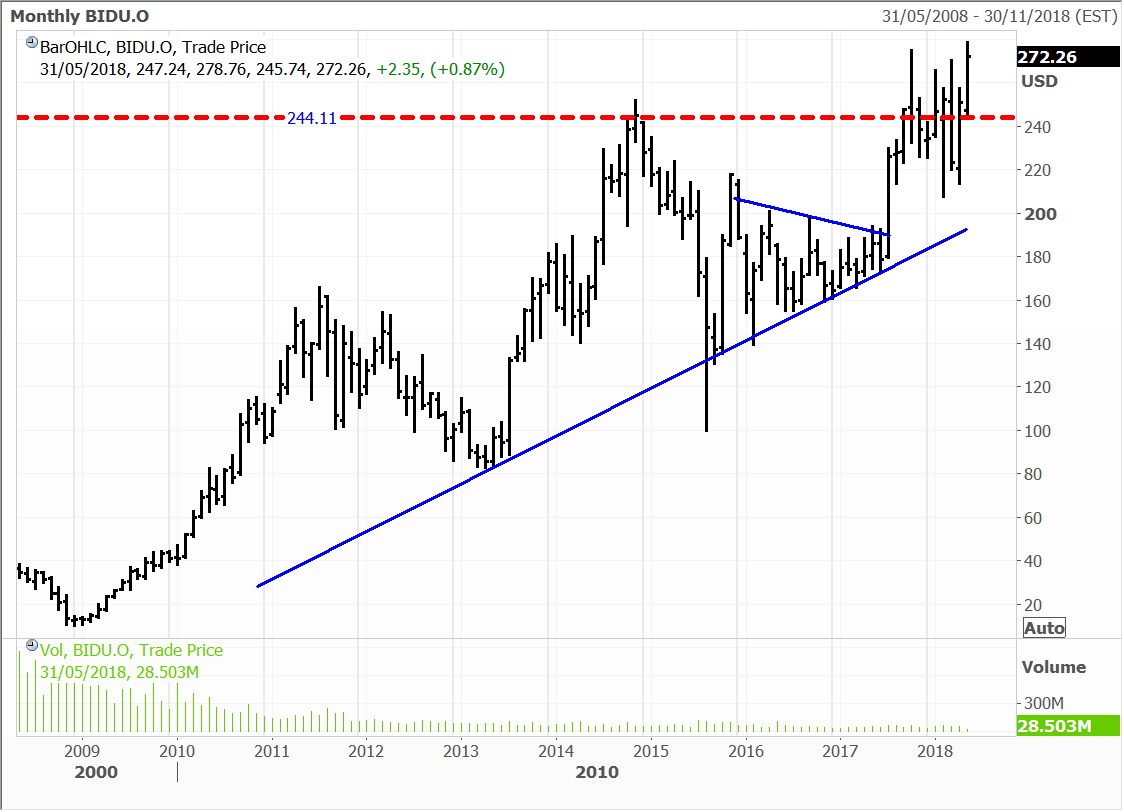 Baidu is a leader in Artificial Intelligence (AI) alongside Google (owned by Alphabet, held in the managed account portfolios) and its video business iQiyi recently undertook an IPO in the United States to fund ambitions in the fast-growing Chinese video streaming market. iQiyi is sometimes called the ‘Netflix of China’ and its shares surged 6.4% on Monday. Baidu retains a substantial stake.

On what was a relatively quiet day for major corporate news, the world’s oldest bank Monte dei Paschi gained 2.5% in Milan after posting better than expected first quarter earnings, supported by lower provisions. In Spain, Caixabank and Bankia were mixed, closing 0.3% higher and 0.6% lower respectively.

Technology and entertainment giant Sony advanced 2.2% as the company inked a deal to buy a stake in the company behind the iconic Snoopy and Charlie Brown characters. More on that later. The megabanks Mitsubishi UFJ, Sumitomo Mitsui and Mizuho advanced between 0.2% and 0.7%.

In Australia the market ticked up towards the highest level in a decade on Monday, with the ASX200 adding 19 points or 0.31% to close at 6135.The resource sector led the way once again, with a gain of 1%, with BHP and South32 the standout with gains of 1.9% and 1.8% respectively.

Japanese real estate firm Mitsui Fudosan broke out yesterday, jumping 9% after reporting higher sales and operating profit for the fiscal year ended March 2018 and forecasting another strong year. Revenue from operations edged up 2.7% to ¥1.75 trillion, with the revenue pie well diversified. Leasing accounted for 32% of revenue, followed by property sales at 29%, the property management business at 20%, Mitsui Home some 14% and Other 5%.

The office portfolio is concentrated in central Tokyo, where business prospects continue to be the strongest in Japan. While the country’s population has plateaued, Tokyo attracts job hunters from all over the nation and its population has edged up. The job market is very strong, with companies struggling to get the workers they need.

Property sales operating income showed the strongest increase, surging 27% year-on-year to ¥83.0 billion. Sales are being driven by an increase in interest from investors and overseas buyers attracted by relatively reasonable prices and high relative yields. The upcoming 2020 Tokyo Olympics are a tailwind. For the current year, Mitsui Fudosan is forecasting group operating profit to edge up to a record ¥250 billion. The company is a core position in the Global Contrarian Fund. 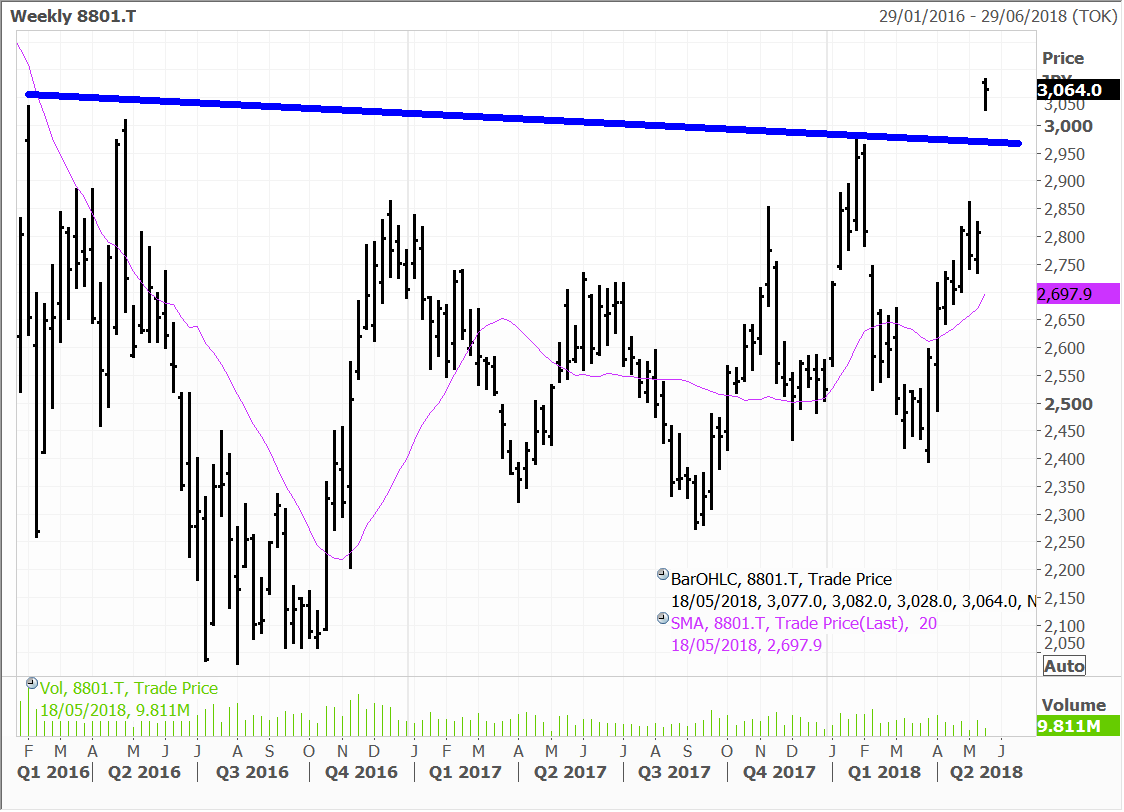 Walt Disney’s and Marvel’s latest blockbuster, “Avengers: Infinity War” became the fifth biggest international release of all time. The movie brought in US$281 million internationally over the weekend – taking the international total to US$1.05 billion. The film continued to lead the North American box office for a third weekend in a row with an estimated US$61 million, lifting the US total to US$547 million. Overall the total sales worldwide have now reached US$1.6 billion.

“Avengers: Infinity War” was released in China over the weekend – China is the second biggest movie market in the world. The film smashed the Chinese presale box office record of 400 million yuan. For the weekend sales in China amounted to US$200 million.

“Infinity War” reached the US$1 billion mark the fastest in history and is on track to become only the 4th film to reach US$2 billion in sales. Disney was smart in selling this penultimate episode as the finale, boosting sales, only to later announce that there will be a fourth instalment for the “Avengers” franchise.

The film has dominated the box office since it was first released at the end of April, but will begin to face some solid competition as “Deadpool 2” and “Solo: A Star Wars Story” hits theatres over the next couple of weeks. 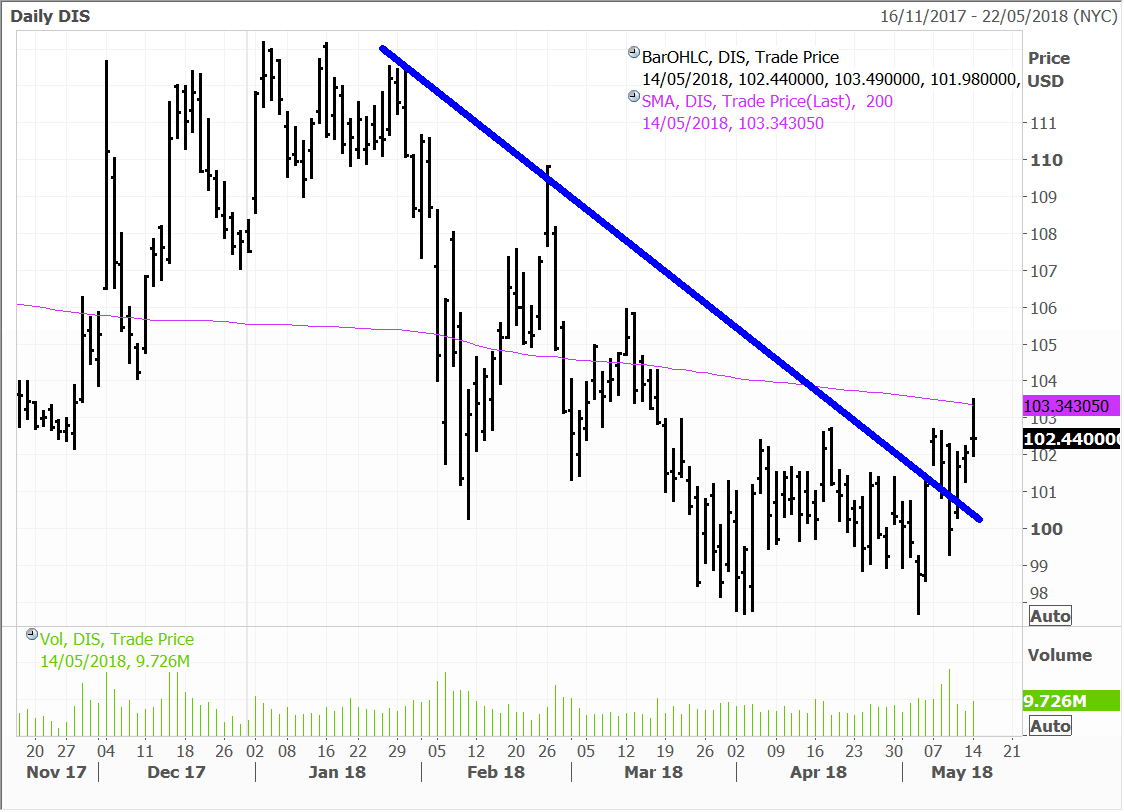 Japanese electronics maker Sony Corp’s music unit is buying a stake in Peanuts Holdings, the company behind Snoopy and Charlie Brown. Sony Music Entertainment (SME) announced that they entered into an agreement with DHX Media. SME will indirectly purchase 49% of DHX Media’s 80% share in Peanuts Holdings for US$185 million.

“We are honoured to deepen our relationship with Sony Music Entertainment as we continue our expansion of Peanuts globally,” said Michael Donovan, Chair and CEO of DHX Media. “Sony Music Entertainment has incredible expertise in rights management across the entertainment and consumer products industries, having successfully grown the Peanuts business in Japan over 200% since they became our agent in 2010. This transaction will allow DHX Media to de-lever our balance sheet as we team up with an ideal partner to help us reach our worldwide growth targets for Peanuts in the coming years.”

After the transaction, DHX Media will own 41% of Peanuts, SME will own 39% and members of the family of Charles Schulz will continue to own 20%. The deal expected to be completed by the end of June subject to regulatory approvals. Sony said they see Peanuts as ‘world-class’ and are hopeful they can use the character business expertise to strengthen the brand. The company has a wide range of characters, counting those from its PlayStation video games. 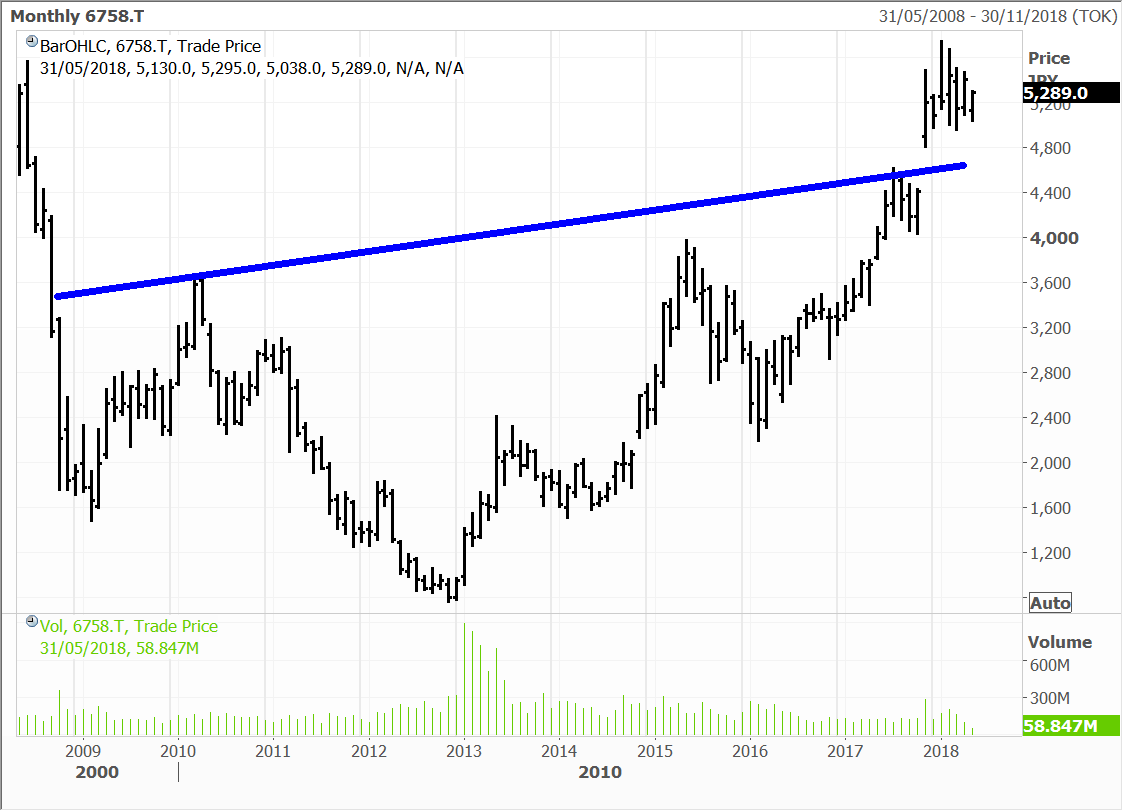