The major US indices finished flat to moderately higher on Friday but that closed out what was a very solid week. The tech-heavy Nasdaq was the laggard, essentially closing flat (-0.03%), while the S&P 500 edged up 0.17% and the Dow gained 0.37%. The Dow gained 2.3% for the week, with Friday marking the seventh daily advance, and the longest winning streak since November. The S&P 500 added 2.4% over the course of the week and although the Nasdaq was the laggard Friday, it led the way with an advance of 2.7%.

Most of the major S&P 500’s sectors finished higher on Friday, with healthcare the standout to the upside. In a speech held in the Rose Garden President Trump blasted high medicine prices, but the policy proposals of his administration largely spared harsh measures for pharmaceutical prices that would have crimped company profits in the United States.

That saw a relief rally in the sector which has been a political punching bag since the Presidential elections. The S&P healthcare sector closed 1.5% higher, representing an outside move for the day, while sub-sectors such as biotechnology fared even better. The closely watched Dow Jones Transportation Index finished roughly 1% higher. On the other hand, tobacco stocks lagged.

The S&P500 has consolidated above 2700 after staging the breakout. Whilst it may take several weeks or months before the old highs are challenged, a considerable foundation of support exists at lower levels – and which has now been successfully tested.

Overall it was a strong week for the technology sector, with Apple gaining 3% over the past week to take its two-week gain following the release of its quarterly report to approximately 14%. Alphabet closed the week out 5% higher and Baidu added 0.5% on Friday to take its advanced for the week to 7%.

What weighed on Disney stock last week were the rumours of Comcast’s intention to throw a wrench into the Fox/Sky takeover with rumours of them making an eleventh-hour bid. However, we believe Disney can prevail on that front and are optimistic about the prospects for its upcoming streaming service to compliment the recently launched ESPN+ sports streaming service.

Certain Italian stocks recovered some ground on Friday after political jitters saw them under pressure earlier in the week. Italian air traffic controller ENAV advanced 1.8%. Banks on the continent also had a decent day in general and Caixabank, Bankia and Credit Suisse gained between 0.8% to 2%.

Suzuki and Panasonic gained 9% and 4.9% respectively after their quarterly reports were received positively. Video game developer Square Enix advanced 2.5%, while robotics leaders Fanuc and Yaskawa added 2.5% and 2.2% respectively. Air conditioning giant Daikin Industries gained another 2.7%, adding to its gains from Thursday after reporting strong earnings for the fiscal year ended March 2018 despite headwinds in the form of rising input costs. Sony was up 1.3%.

I remain of the view that there will also be thematic tailwinds coming for the insurance sector as inflation and interest rates push higher which will bolster premium growth and investment income respectively. This will be positive for the likes of QBE Insurance which I noted has staged a mini-rebound over the past month, and was up another 0.7% on Friday.

Shares in Nufarm pushed 3.7% higher on Friday to $9.17, with a number of positive broker notes, despite last week’s downward revision to earnings. Morgan Stanley was particularly bullish, and said there was “32% potential upside to its current price target of $11.75” and remains overweight on the stock. The report observed that “Beyond the base business, we think the Omega3 project presents substantial incremental upside that is yet to be captured in the share price,”

Morgan’s on the other hand has highlighted the strong growth potential of the company’s European business following acquisitions, and that “two high-margin European product portfolios will strengthen its growth profile and earnings quality and…should gradually narrow its valuation discount to peers,”

On this occasion I agree with both brokers, and as I wrote last week, we remain very positive on Nufarm. Our analyst team have also consistently highlighted the ‘game changing’ impact of the company’s acquisitions in Europe.

I think that Nufarm is well placed to the world’s rising demand for food, shortage of arable land (with the weather a part of this) and the need to increase yields. Astute deal-making has also strengthened the company’s leverage to this thematic. We hold Nufarm in the Global Contrarian Fund and in the Concentrated Australian and Small & Mid-Cap managed account Portfolios. 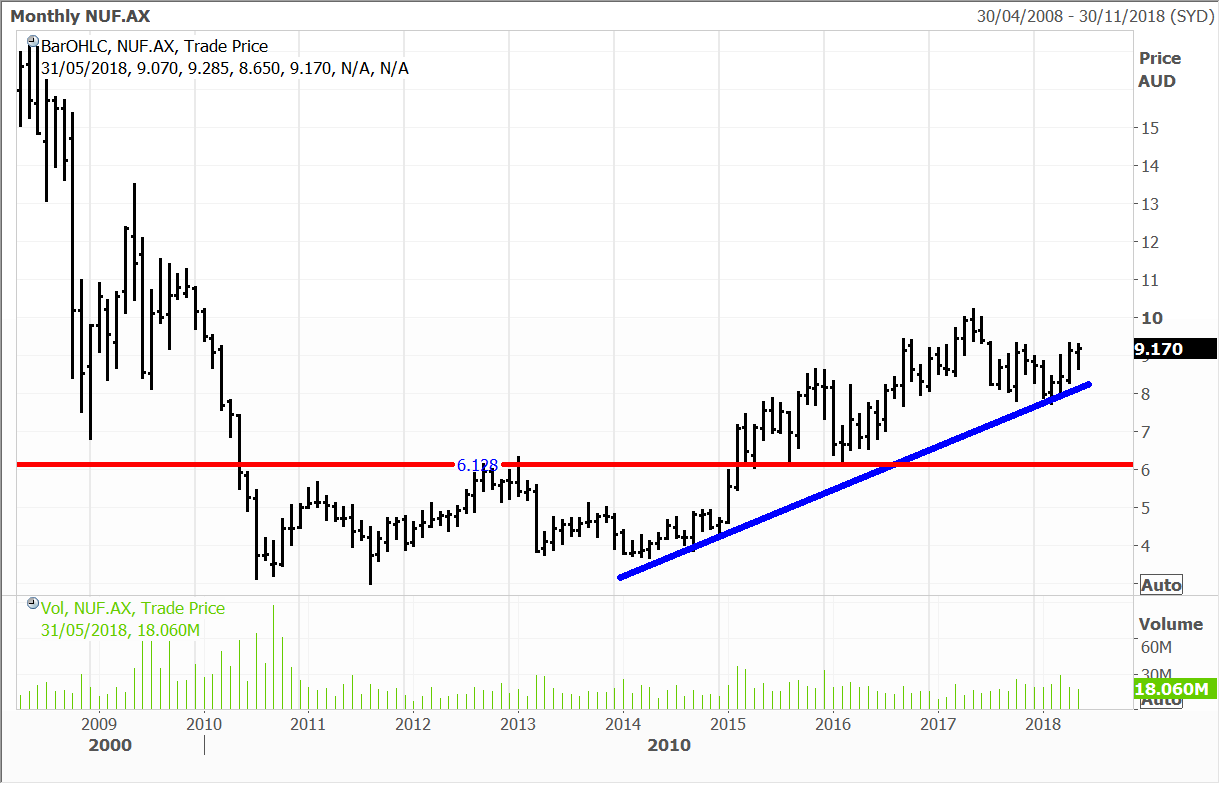 ZPG was spun out from the Daily Mail in 2014, and its share price has surged since. ZPG has flourished after coming ‘out from under the umbrella’ from the Daily Mail, and is consistently achieving EBITDA margins of around 40%. The company has also been able to target growth by acquisition, and also branch out into digital businesses. Domain is following a much similar path after breaking above resistance last week.

Will history repeat in Australia? 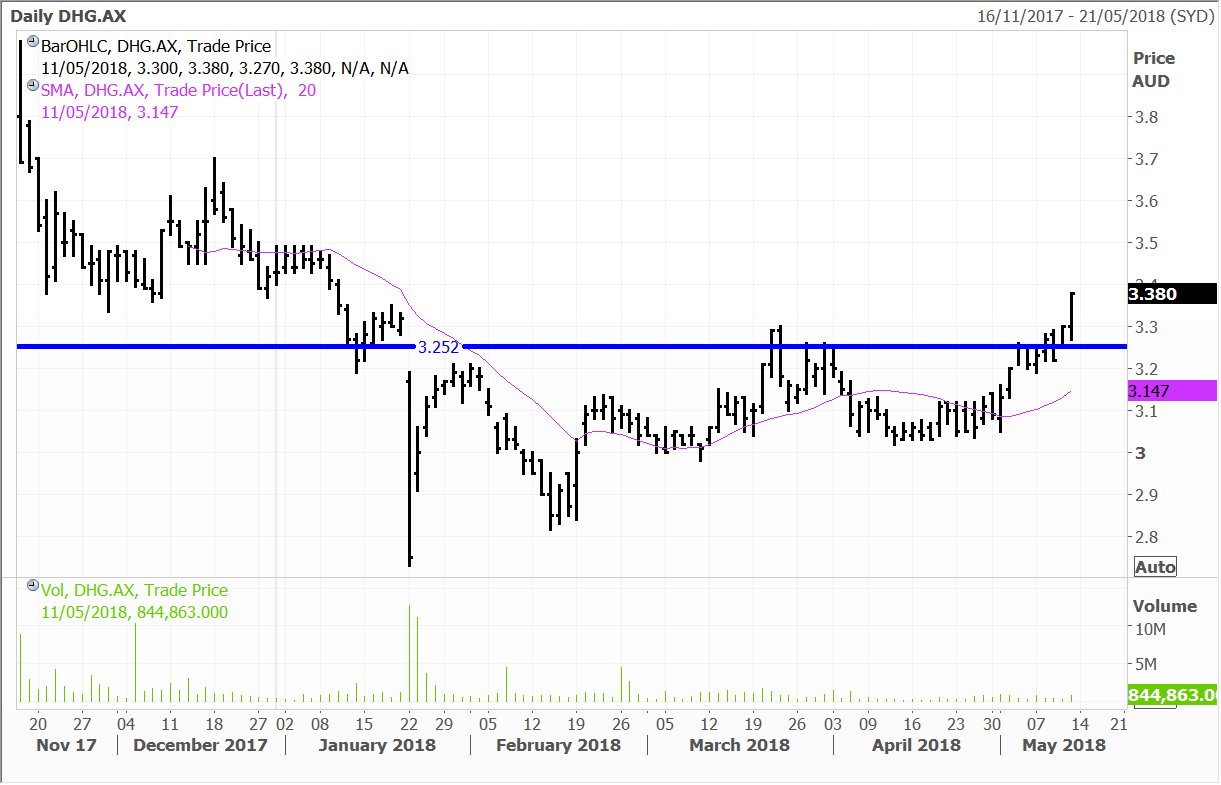