US stock markets ended the session quietly in a fairly uneventful day, despite being overshadowed by the summit between DJT and Kim Jong Un. Notwithstanding the potential “diplomatic coup for the Trump Administration” and a possible paradigm shift in the political relationship with North Korea, markets are very much focused on the FOMC verdict on rates due out later today. It is a virtual “fait accompli” that the Fed will lift rates by 25 basis points later today with an 85% probability now priced into the futures curve.

Neither the summit or a ‘’well flagged” rate hike has moved the needle much for the markets in recent days, but what investors will be paying close attention to is the rhetoric from the Fed and how the rate hike is positioned. The devil will be in the detail and what the Fed has to say about the future trajectory of rate hikes.

I think we can expect more of the same commentary heard at the past few FOMCs…where the “economy is strong, but wage growth yet to really accelerate, while inflation is picking up, but still below the threshold of concern”, with a net result that the Fed will “remain on course for at least one more hike later this year”. Let’s see what transpires, but I don’t think Jerome Powell will want to depart too far from the script.

If the Fed “sticks to the script”, this will be well received by the markets, but the S&P500 may still struggle to make new record highs in the weeks ahead. I think we will need a further catalyst in the form of the US partially resolving the trade dispute with China, and getting confidence back into the markets that “things won’t get out of hand”. Having said that, the recent spat with Canadian PM Trudeau barely caused a ripple.

The most probable catalyst in my view will be the June quarterly reporting season which I think will provide the most likely impetus for the “big push” to new record highs. For the S&P500, 2800 remains a formidable barrier – as does the summit above 2860, so it would not be surprising if over the next few weeks we see the US indices in “idle mode”. 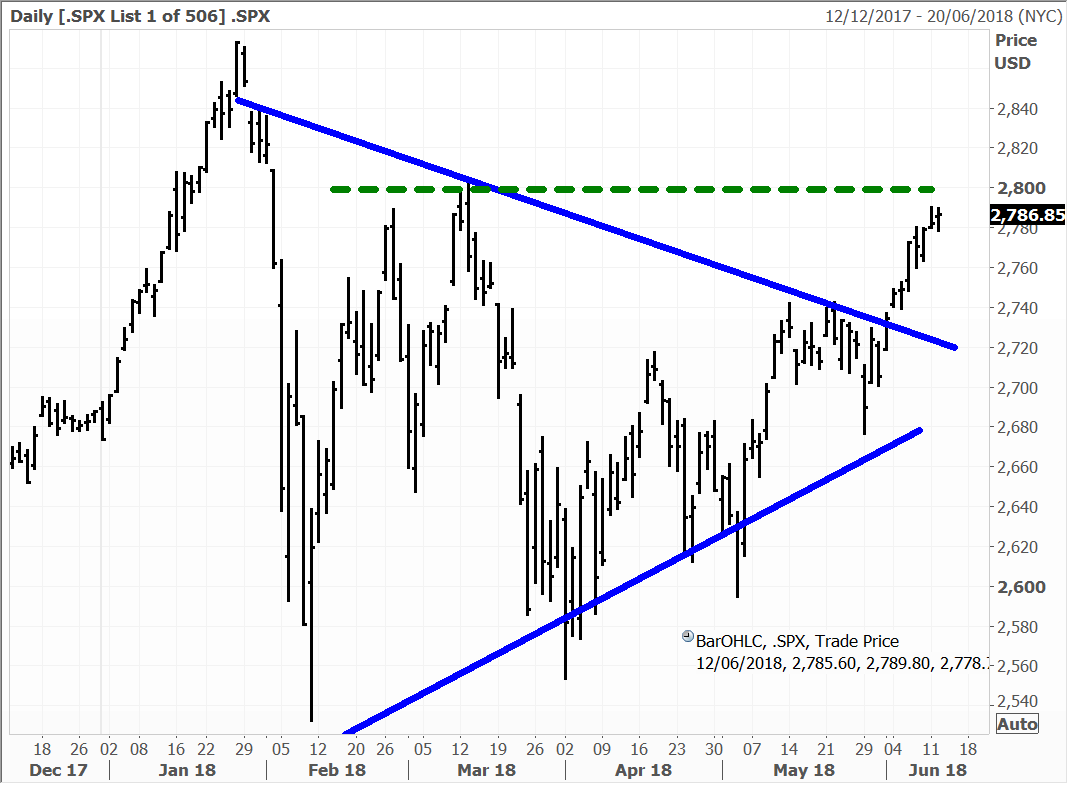 On the corporate front, the Department of Justice is about to make a decision on the AT&T merger with Time Warner. This decision with have a profound impact on the US media space if it the merger is approved, and implications for Fox, Disney and Comcast, which are about to be involved in a three-way tussle. Comcast is waiting for the decision before announcing an all cash offer for Fox. Fox was up 5% in afterhours trade.

Disney shares were little changed in regular trading hours, even as Marvel’s Avengers: Infinity War passed the $2 billion mark at the box office. Traders were waiting on news regarding the AT&T merger, expected to have implications for the impending Comcast bid for Fox assets. Disney is converging within a contracting triangle trading range with a series of “lower reaction highs” and “higher reaction lows” – which typically precedes a breakout. 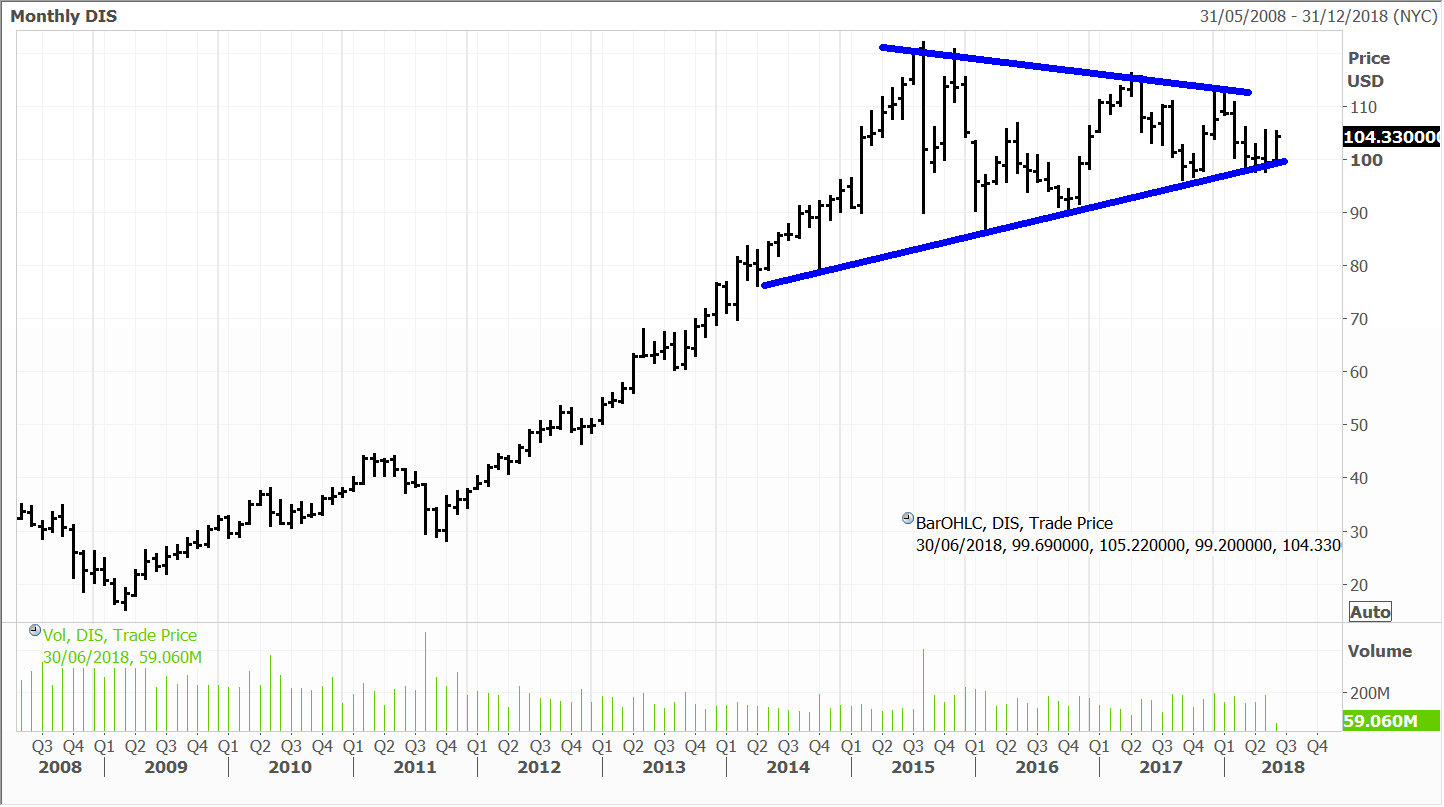 The topical Italian and Spanish markets were stable, with their benchmark indexes edging up 0.15% and 0.16% respectively. In Spain, the local stock exchange operator Bolsas y Mercados gained 1.6% and Telepizza added 0.7%.

The major Asian indexes finished broadly higher on Tuesday as the historic summit between President Donald Trump and North Korean leader Kim Jong-un took place. In Japan, the benchmark Nikkei index gained 0.33% with the retail, food and railway sectors among the best performing. Laggards included semiconductors and video game companies, with both seeing some profit taking after strong recent performance.

In greater China, the Shanghai Composite gained 0.89% to break a three-day losing streak, while the benchmark Hong Kong index edged up 0.13%, extending a ‘winning’ streak.

In Hong Kong, the Macau casino operators were relatively strong in trading, with Sands China, MGM China and Wynn Macau closing between 0.3% to 2.3% higher on positive Macau-related news flow. Sunny Optical Technology shares advanced 1.9% as traders wager that its customer ZTE will be able to get back to business soon.

Domain Holdings Australia pushed 4% higher and has steadily clawed back the ground lost since the shock departure of its CEO only a few months after listing. We said at the time that the company was bigger than the man, and the market has also come around to this view. We see tremendous growth in digital revenue and earnings as Domain plays catch up with the larger REA group. There is precedent for this overseas. 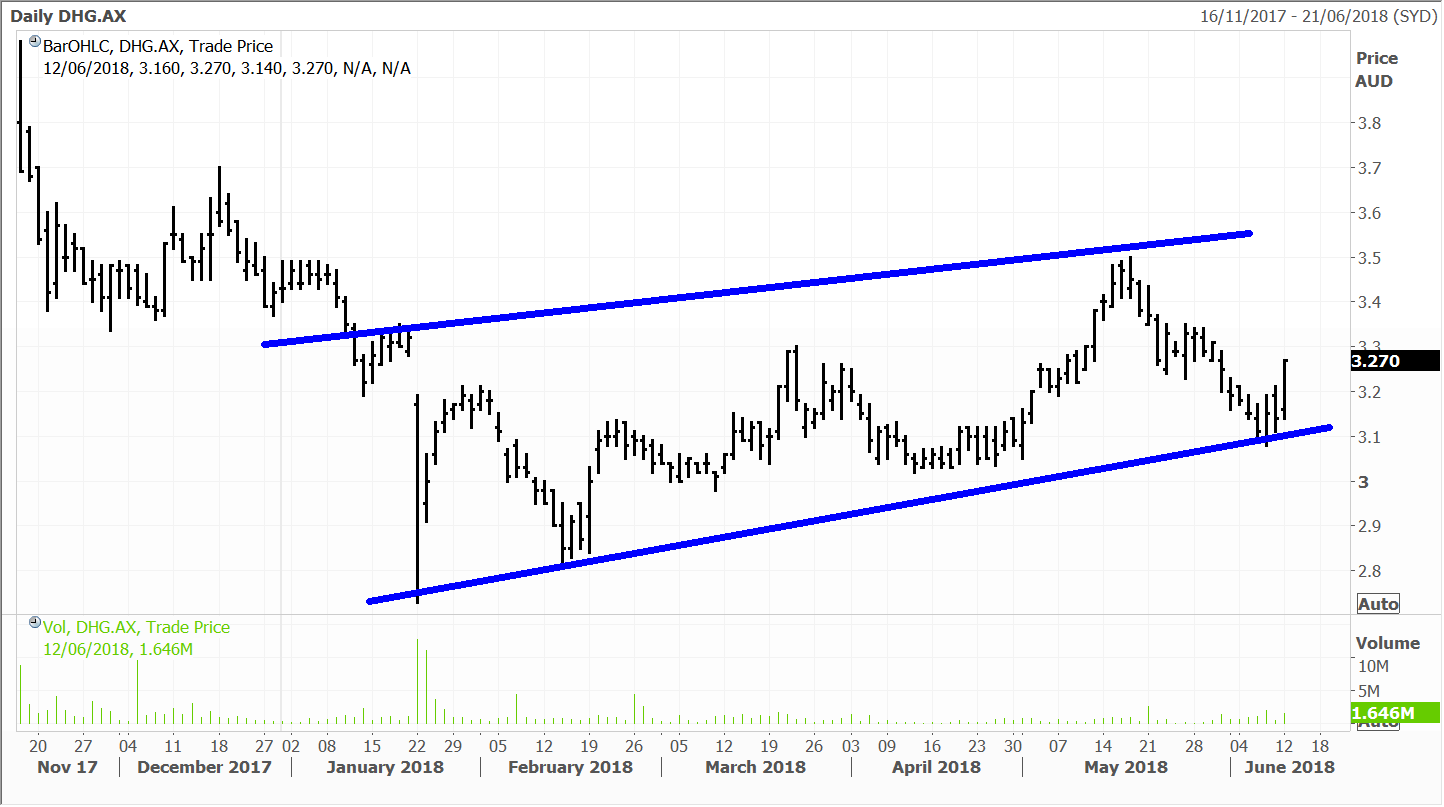 Last month the UK online real estate portal owner ZPG agreed to be acquired by US-based private equity firm Sliver Lake for £2.2 billion. ZPG was spun out of the same company that owns the Daily Mail and owns the online property companies Zoopla and Prime Location, along with other brands such as the price comparison website uSwitch.

Like Domain, primarily through Zoopla, ZPG is the number two player in the online real estate portal market in the UK, behind Rightmove, and has had a stronger growth profile than its bigger rival. This has seen the valuation gap close quickly between the two. Indeed, in the first year of listing, ZPG traded at a premium to Rightmove and the offer from Silver Lake represented a 31% premium to the closing price before the announcement dropped.

The Macau casino operators fared positively in Tuesday trading, supported by positive broker reports on the sector. MGM China and Wynn Macau gained 2.1% and 2.3% respectively, while Sands China logged a more modest 0.3% gain. All three are top 10 positions in the Global Contrarian Fund and are overweight holdings in the managed account portfolios.

JP Morgan and Nomura reportedly wrote positively of the sector in notes published this week, referring to the still strong growth trend in casino gaming revenue across the sector. They are expecting a return to higher growth after the month of May proved a relative disappointment, which has been partly attributed to the ‘luck’ factor being favourable for punters that month. 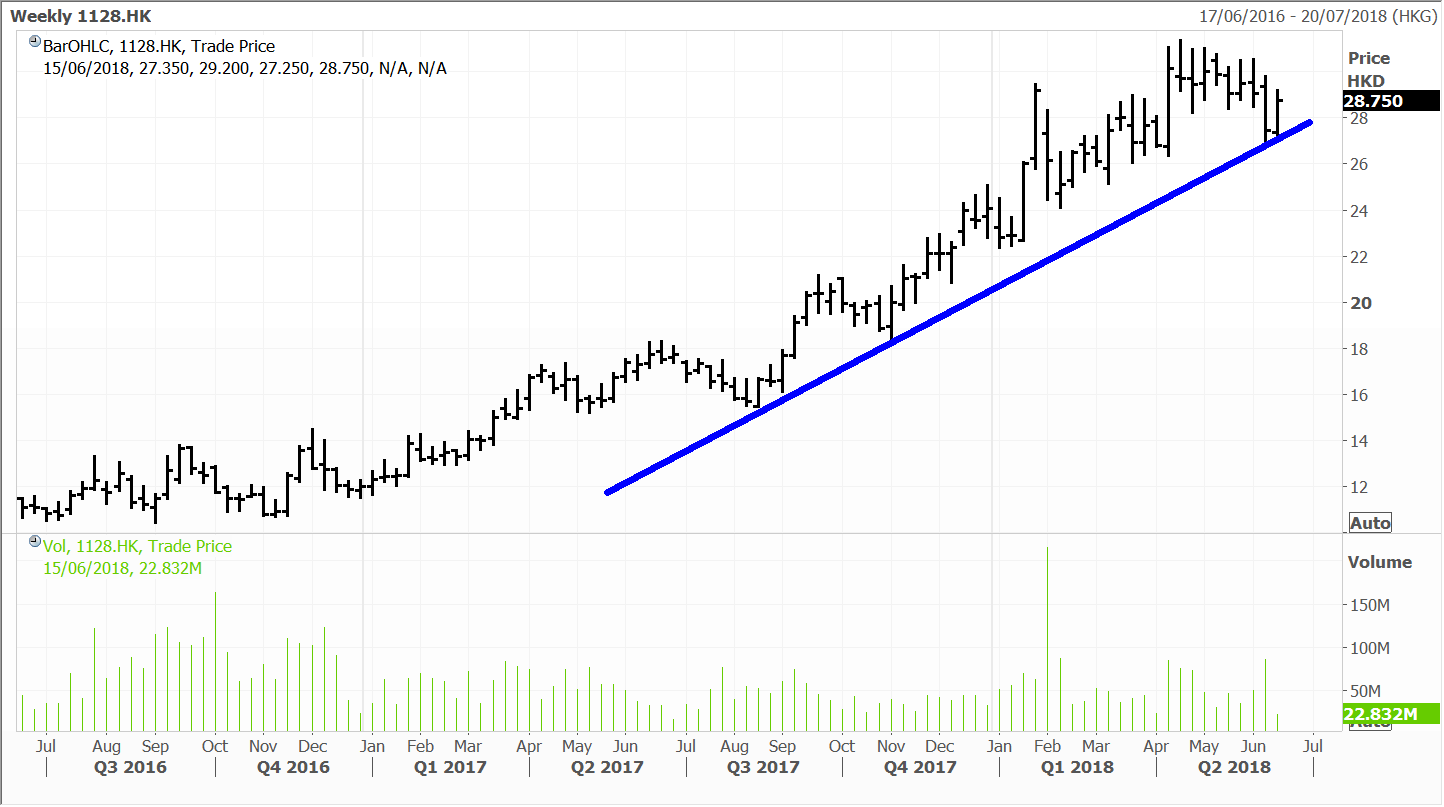 Data from the Gaming Inspection and Coordination Bureau of Macau showed casino gaming revenue in the world’s largest gambling hub increased 12.1% year-on-year in May to 25.49 billion patacas, equating to about US$3.1 billion. That represented a cooling of the pace of increases seen earlier in the year and was well below the 27.6% year-on-year increase seen in the month of April. The May increase also missed the 16% to 20% growth range expected by analysts.

This week’s broker notes reportedly cited an improving mass market backdrop in the beginning of June relative to May and it is in this segment of the market we believe the greatest opportunities for Macau are over the long-term. Authorities have directed the casinos to develop a more ‘family-friendly’ environment in Macau and transport infrastructure in and out of the region is being enhanced. 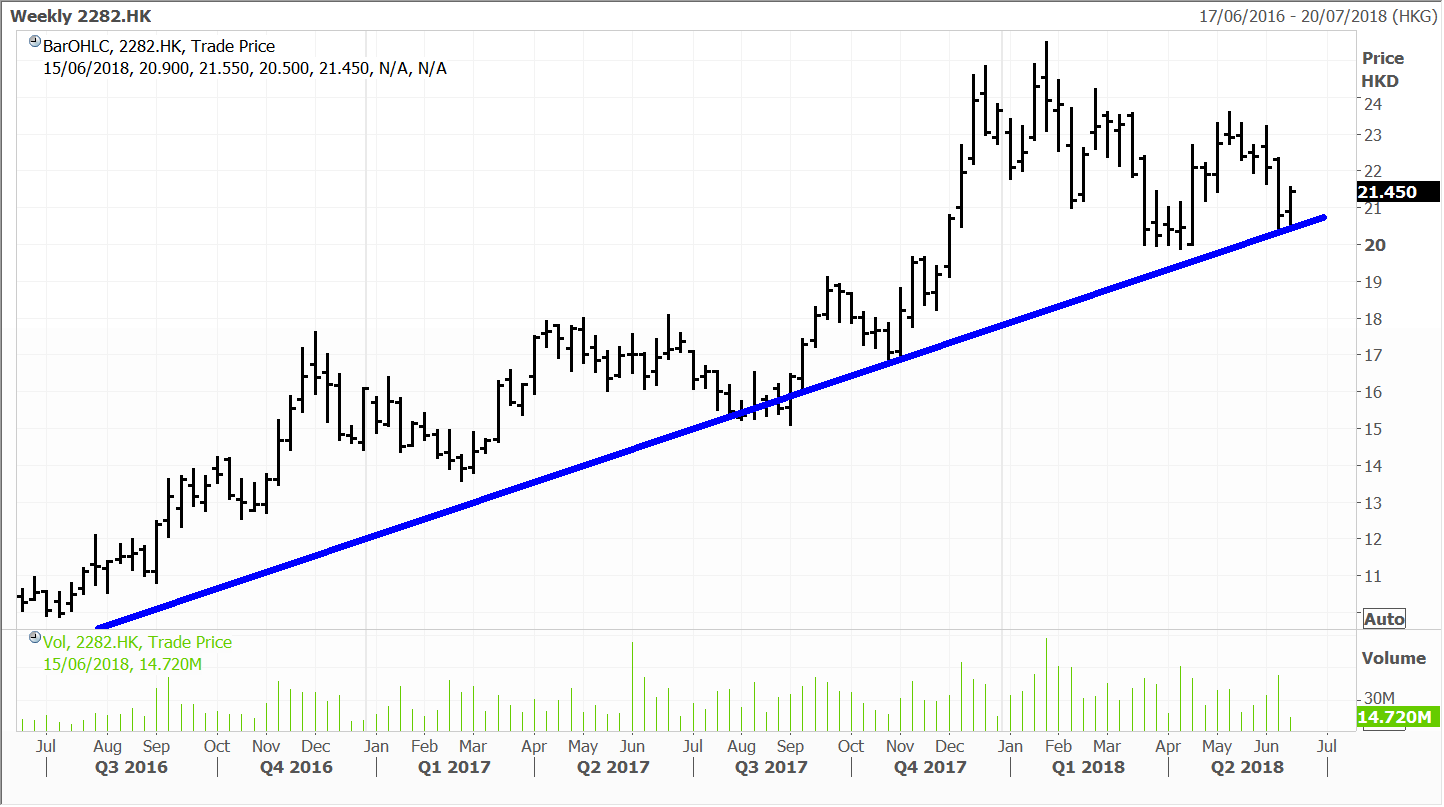