US stocks declined sharply again on Thursday, following losses on the key European exchanges. The S&P500, Dow Jones and Nasdaq lost 3.75%, 4.15% and 3.9% respectively, as markets again fretted over what a stronger US economy will mean for interest rates, and as strong labour market data fanned fears of higher inflation. Volatility spiked back up to 36 as the dollar remained steady and as commodities declined sharply.

Thursday was closer to a replay of what happened on Tuesday, with the US indices sliding heavily into the close. The “draw down” is continuing as the dust begins to settle after the climactic sell-off earlier this week. However, as I wrote earlier this week, we are probably getting even closer to the end of the correction with the US economy intact and the corporate sector closing out what was another solid quarter. I expect the markets to soon “find a level and stabilise”, with valuations once again much more attractive than two weeks ago.

I wrote earlier in the week that the correction must be close to bottoming, following a climactic sell-off. With the S&P500 (chart below) now down 10% from the peak, I stand by that view and believe the current correction is very near its end.

Volatility rose on Thursday with the VIX index (chart below) surging more than 20%, reaching a high of 36, before settling at 33. While vol has certainly increased it is notable that it did not reach the levels seen earlier in the week, when the VIX got as high as 50. This in my view also suggests that the end of the correction may be at hand. 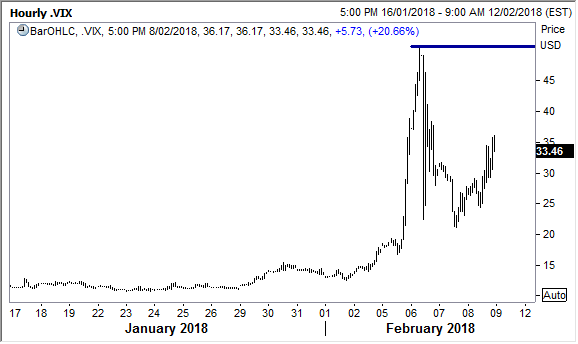 In Europe, after breaking a seven-day losing streak on Wednesday, stock markets dipped back into negative territory yesterday. The continued rise in bond yields were a headwind, as was a weak read from US futures. Volatility was back on the table with the European equivalent of the VIX jumping to 32, the highest since the Brexit referendum. The pan-European Stoxx 600 lost 1.60% for the day, while the Stoxx Europe 50 – which contains many blue-chip stocks – was down 2.24%.

Energy and mining companies were under pressure due to oil and copper price weakness, along with a strengthening of the US dollar. Banks and automakers were weaker with Volkswagen (which we own in the Global Contrarian Fund and European Managed Account portfolio) along with BMW were off sharply. The biggest standout to the upside on the day in the Stoxx 600 was the Danish Telecom company TDC, up almost 18% after it rejected a takeover offer from Macquarie and several Danish pension funds.

Diversified commodity players and oil majors took a tumble on lower oil and copper prices, with the likes of Rio Tinto, Glencore, BHP Billiton and Royal Dutch Shell all in the red on the day. Housebuilders tanked on the prospect of higher interest rates.

Automakers, manufacturers, pharmaceuticals, glassmakers and financials all had a solid day, while technology stocks were mixed and food companies and metal stocks closed lower.

Hino Motors – a truck maker – tacked on another solid gain, rising 3.2% on the day. Robotics specialist Fanuc Corp surged 3.6% and energy company Inpex Corp gained 1.2%. The megabanks Mitsubishi UFJ, Mizuho and Sumitomo all made modest gains. Hino, Fanuc, Inpex, Mitsubishi UFJ, Mizuho and Sumitomo are all holdings in the Global Contrarian Fund and some of our Managed Account portfolios.

Air conditioning giant Daikin Industries was up 3.0% and the video game company Square Enix jumped 4.1%. Square inked a deal with Walt Disney’s Marvel division last year to develop some new video games and there was some positive news flow on how the game development for the first project is faring in industry publications this week. Our Asian analyst team sees this link-up as a great opportunity for Square. Both Square and Daikin are held in the Asian Managed Account portfolios.

In Hong Kong, a standout performer was Wynn Macau, surging 8.0% after resuming trading in the wake of Steve Wynn’s resignation and the rally in the company’s Nasdaq-listed parent Wynn Resorts the night before. Peer Sands China gained 2.0% and MGM China was up marginally. I have conviction on the long-term opportunity in Macau and hold an overweight position in all these stocks in the Global Contrarian Fund, the Global Opportunities and Asian Managed Account portfolios. Gaming revenue in Macau was up a whopping 36.4% year-on-year in January, easily surpassing expectations for a 27% increase and getting 2018 away to a strong start.