The US stock market closed out the worst weekly performance in two years with a sharp rally into the close on Friday. The S&P500 reversed earlier losses to lift 1.5% into the close with the index pushing back above 2,600. US stocks endured some big swings Friday before the S&P closed 1.49% higher, the Dow gained 1.38% and the Nasdaq rose 1.44% as some ‘bargain hunters’ stepped in. News that lawmakers ended a brief government shutdown and Donald Trump signed a bill temporarily raising spending was supportive.

But the losses for the week were steep with S&P500, Dow and Nasdaq all down 12% at one point from their peaks. We are holding the line with our view that the nadir of the correction was most probably reached last week and that volatility levels will go down as the market stabilises.

The S&P500 staged a big comeback on Friday after sharply reversing intraday losses earlier in the session. 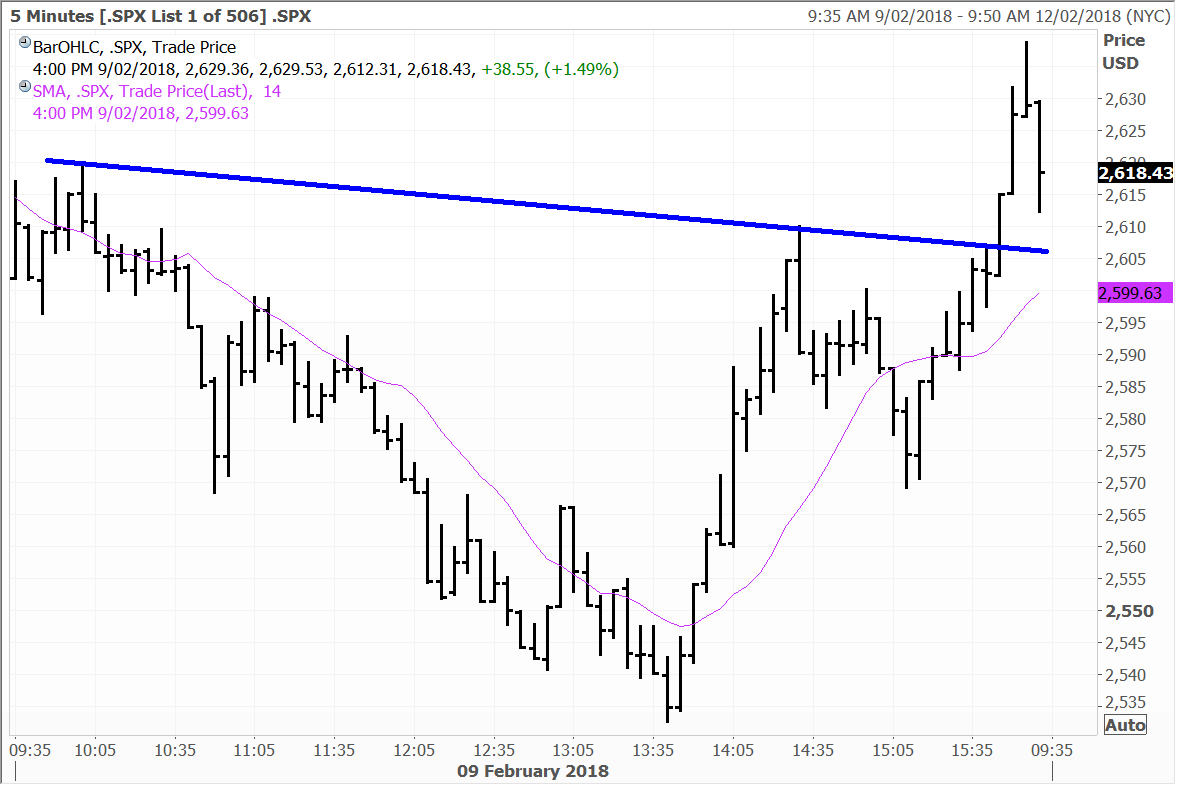 The VIX ended at 29 as stocks bounced off intraday lows. The yield on the 10 Year T Bond closed the week at 2.85% – which is not for from the highs at 2.9% earlier in the week. Commodities were mostly lower including oil and gold, while the DXY stabilised at just above 90.

For this week, the markets will be looking ahead closely to key economic data out in the US, including the Consumer Price Index which is out on Wednesday. The CPI will provide the market with important clues about inflation and more importantly, how the US bond market will react. If yields do rise however, it remains to be seen whether the volatility in equities stays at elevated levels, now that the initial shock has been absorbed by investors.

Unlike 2008, there is little in the way of bad fundamental news around. I remember during the GFC and for months we were barracked by bad news. Every day would see some bad headlines. And at the core was a “rotten” banking system which was exposed to the endless subprime mess which struck to the heart of the financial system.

Fundamentally today however, at the corporate sector level things look very different. So getting back to the sharp correction last week, I think it was more about the market reacting to the sudden break from the ultralow volatility levels, and acclimatising to the reality that interest rates need to rise. 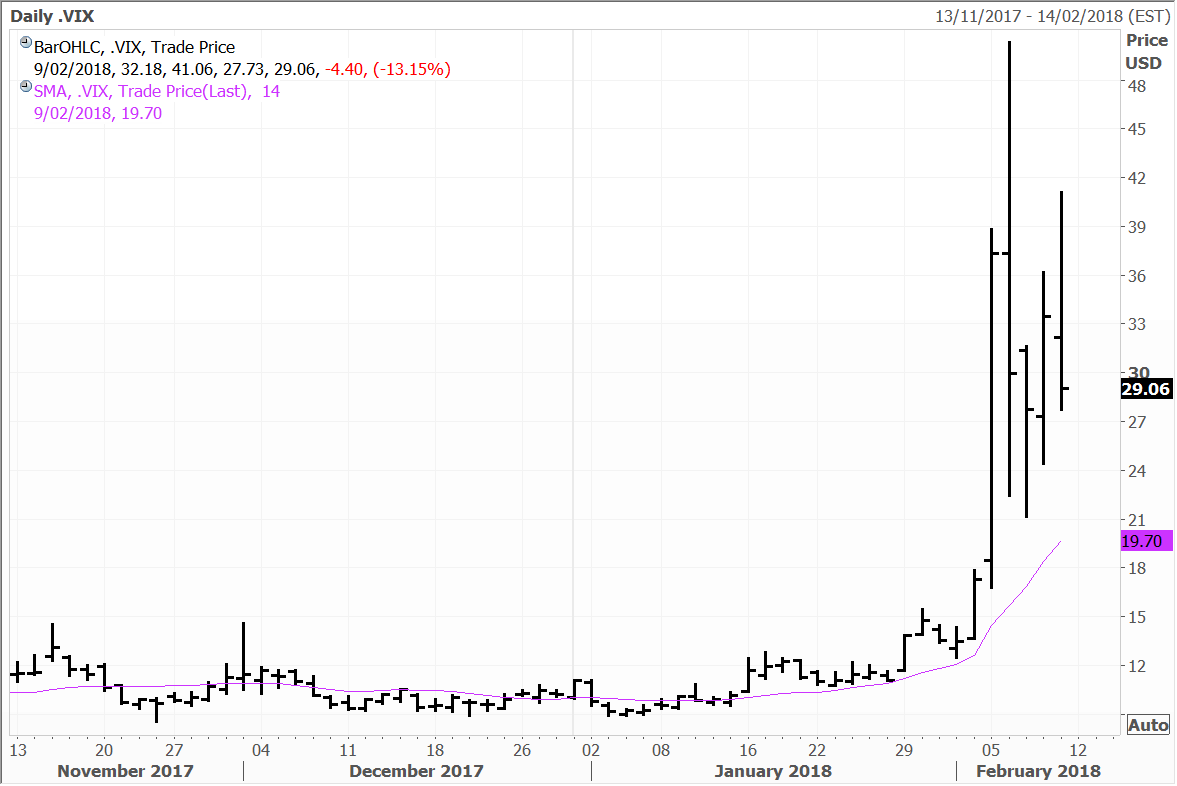 In economic news Friday, the Commerce Department reported wholesale inventories were up 0.4% in December, after climbing by (a revised) 0.6% in November. The forecast was for a 0.2% increase. As mentioned above, this week’s CPI takes on a much more important role and traders will be looking to number print on Wednesday for a lead into inflation and the future direction of interest rates which is influencing the market at present.

FedEx and UPS shares fell on reports Amazon is preparing to launch a delivery service.

21st Century Fox shares were strong again Friday, up another 3.4% after earlier in the week beating on the top and bottom lines, as revenue came in at $8.04 billion versus the Wall Street estimate of $7.94 billion. Adjusted earnings per share were 42 cents per share, above the 38 cents expected. Many of Fox’s assets are being acquired by Walt Disney, which was up 1.7% Friday. Disney and FedEx are core holdings in the Global Opportunities and US Managed Account portfolios.

European shares closed near their lows for the day on Friday, as late in the trading day Wall Street shares opened on a weak note. The pan-European Stoxx 600 lost 1.45% for the day, while the Stoxx Europe 50 – which contains many blue-chip stocks – was down 1.52% capping a horrid week for European equities.

Amundi, an asset management firm, slumped 5.8% in trading on the Paris Bourse after investors weren’t happy with its new growth target for the 2018 – 2020 period. Finance stocks were generally weak on the day, with the likes of the Spanish banks Caixabank and Bankia down 1.5% and 1.8% respectively.

There weren’t many stocks in the green for the day, but elevator company Kone eked out a 0.7% gain and Telepizza just kept its head above water with a 0.1% gain. Caixabank, Bankia, Kone and Telepizza are all held in European Managed Account portfolios.

In Australia the market had a tough week to say the least and ended Friday on a soft note. The ASX200 was off 0.9% at 5,838, mirroring weakness in the US and the rest of Asia. A positive session on Wall Street would seem to have given some cause for optimism over the weekend, although the futures are pointing towards a lower open.

Evolution Mining remains a standout play here in our view, with production rising and costs falling. The stock is up 4.5% on Friday, and there were some further positive news forthcoming from drilling at the Tennant Creek project where the company is partnered with Emmerson’s. High grade copper has been intersected, and a $15 million farm in obligation will see EVN gain a 65% interest, with options to increase this. 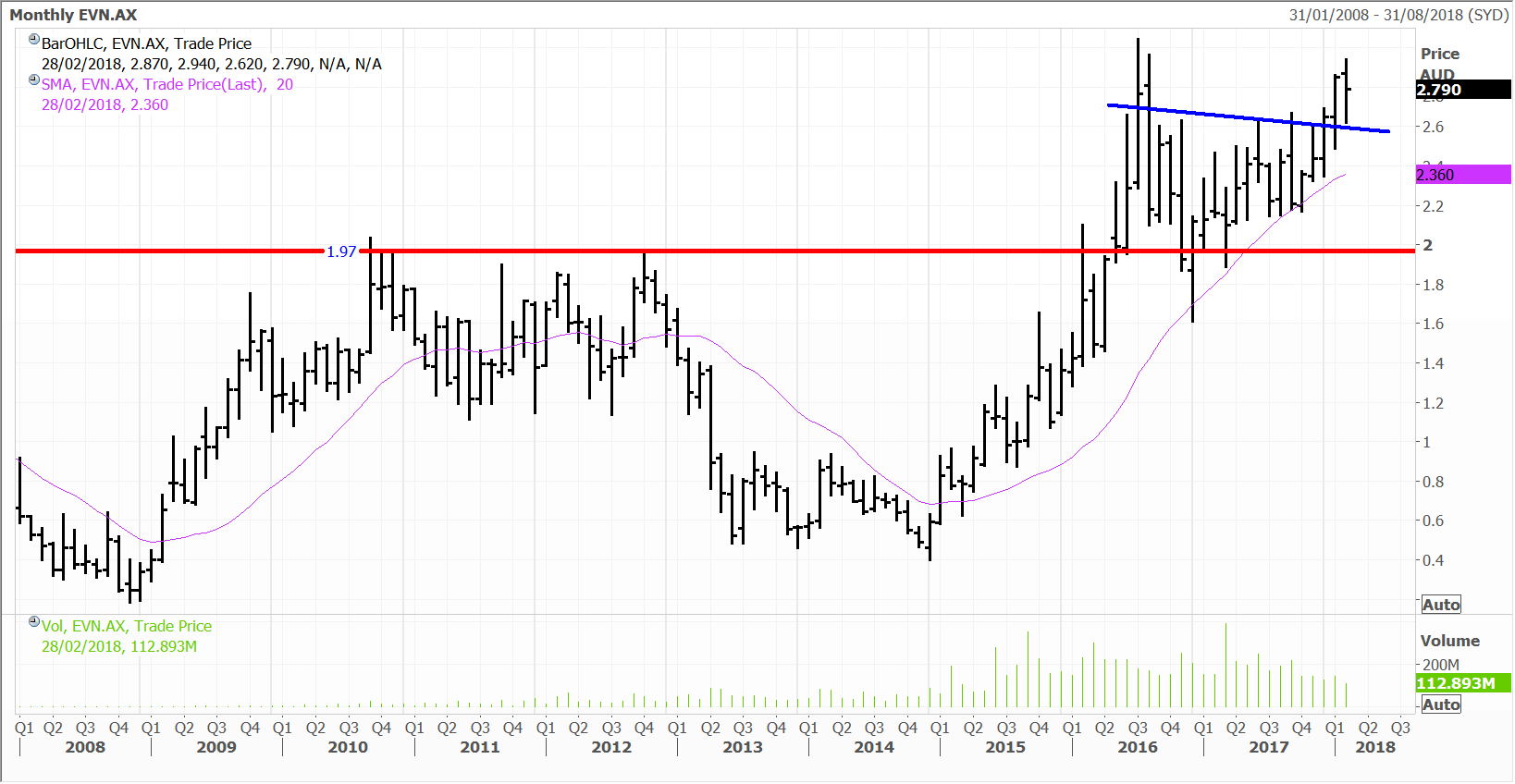 QBE was weaker on Friday, but has held up well during the recent correction, which speaks to the outperformance we are likely to see in a rising interest rate environment with bond yields breaking out to the upside. We will also get a further glimpse here when the company releases results on 26 February.

There could also be something big coming in terms of a divestment, and new CEO Pat Regan is clearly looking to stamp his mark on company specific turnaround proceedings. He may also be ruffling some feathers it seems with group treasurer Paul Byrne said to be leaving the scene in unexplained circumstances.

Asian stocks finished sharply lower on Friday, with rising bond yields and soft oil prices weighing on traders’ minds. The Shanghai Composite led the way on the downside, falling 4.05%, while the Hang Seng dropped 3.10% and the Nikkei slipped 2.32%.

The weakness in Hong Kong was broad-based and the Macau casino operators had a tough day, with MGM China the weakest, losing 6.8%, followed by Wynn Macau down 4.4% and Sands China slipping 4.4%. We hold all three in the Global Contrarian Fund, the Global Opportunities and Asian Managed Account portfolios. I have conviction on the long-term outlook for Macau, which is going from strength to strength as Chinese tourism continues to grow on rising discretionary incomes. Gaming revenue in Macau was up a whopping 36.4% year-on-year in January, easily surpassing expectations for a 27% increase and getting 2018 away to a strong start.

MGM China corrected sharply in line with the Macau gaming sector, but the upward trend remains very much intact. 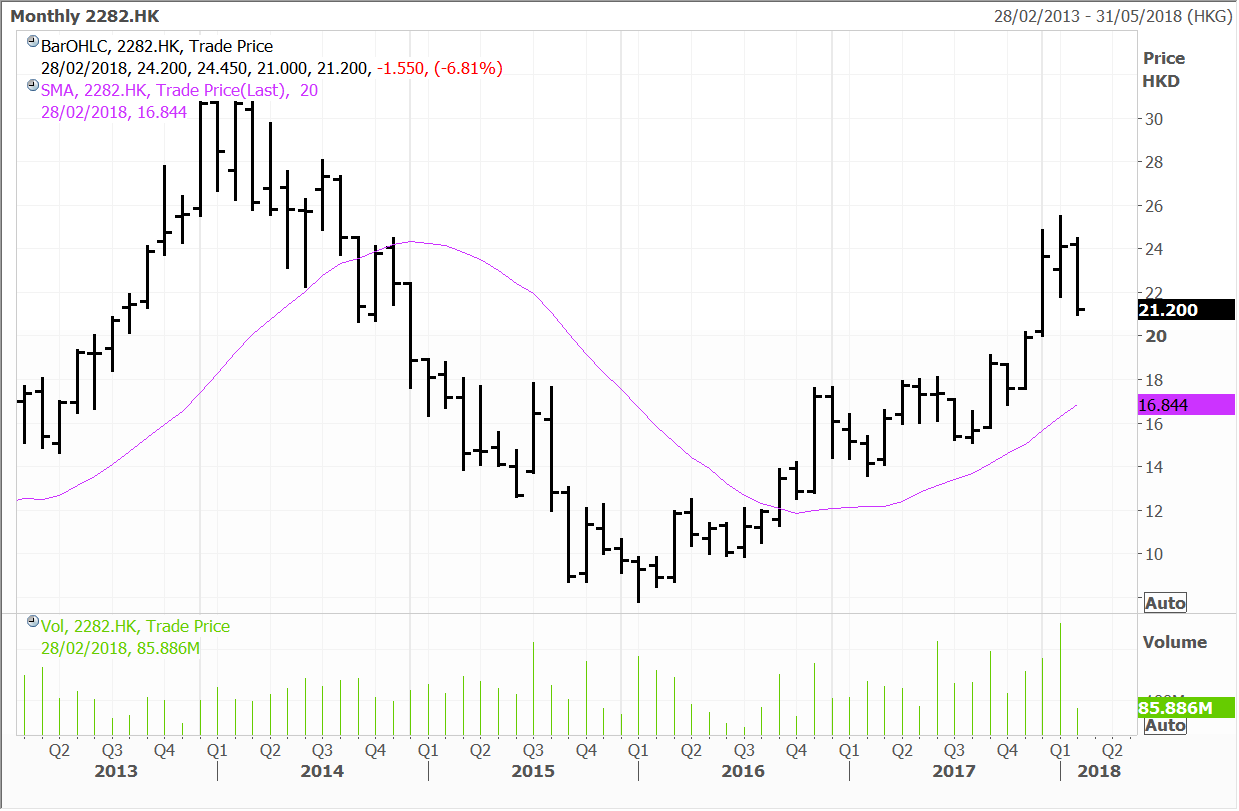 In Japan, there were relatively few stocks in the green for the day. Inpex Corp, an energy company, fell 5.7% as the crude oil price slipped further. Inpex is held in the Global Contrarian Fund. One company bucking the trend on the day was Bandai Namco, which jumped 9.4% on news it was developing new video gaming IP (intellectual property) and would seek to target the China game market more aggressively. The most recent title from Bandai is Dragon Ball FighterZ.

Disney has been busy working on its own streaming service to go head to head to with rivals Netflix and Amazon Prime. I think the market under-estimates how formidable the combined Disney / Fox streaming offering will be when both studios begin to crank up their own streaming content. Exclusive content that holds appeal, and lots of it, is what is needed to entice viewers to the Disney/Fox service come launch in 2019 and they have a good chance of being able to deliver. 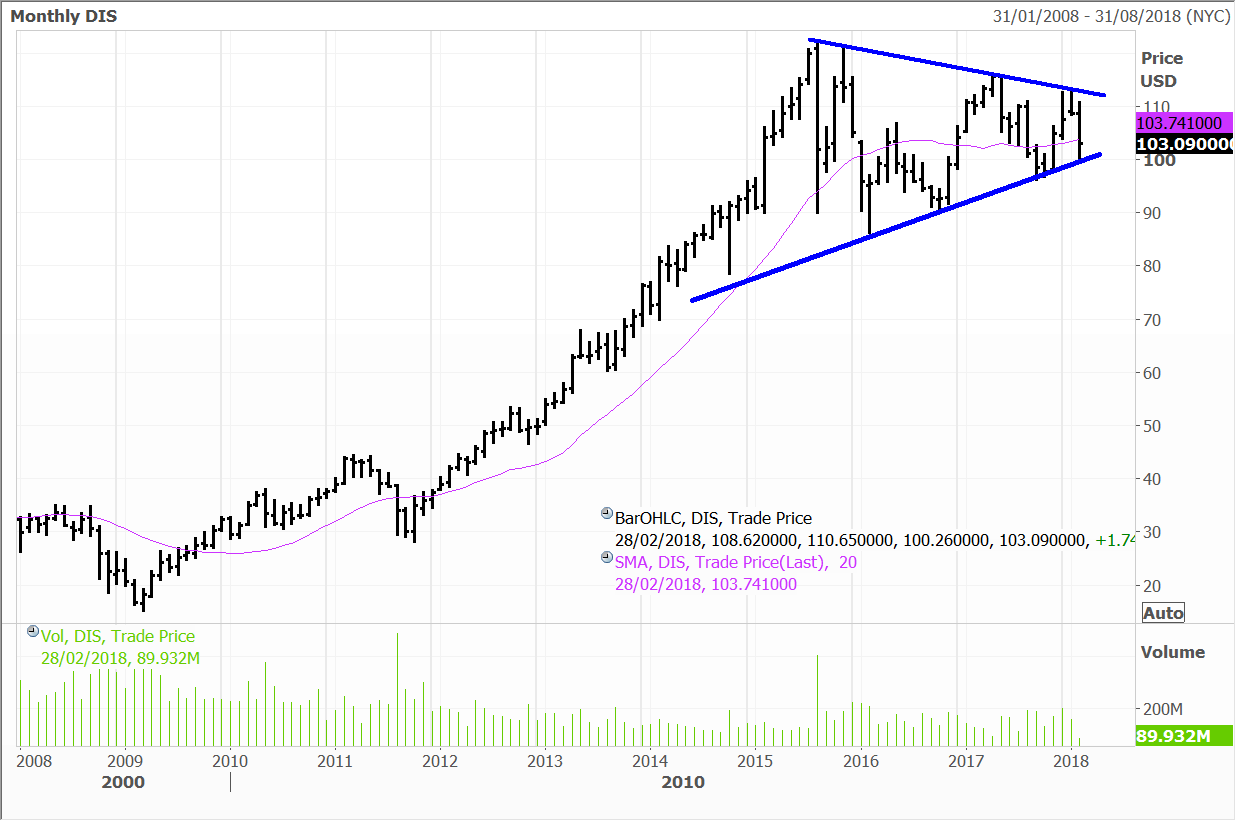 Disney is looking to rollout the streaming service in North America first, before releasing overseas. However in terms of original content, the most alluring exclusive TV show being developed is a Star Wars branded TV series (made just for streaming). The Game of Thrones production team have been hired to drive that. We can also expect many other TV shows to emerge and whilst some analysts have expressed doubts that Disney will want to move its clean brand away from Children’s focused content, Fox will no doubt be used a channel for this.

Disney will also look to extract more from its brands such as Marvel and Monsters Inc. as well with shows and TV serials being under development. There is an animated Monster Inc TV series under development, along with a Marvel live-action title series, and a High School Musical show. The word on the street is that each one will cost between $25-35 million for 10 episodes, while a particularly ambitious project could be capped at $100 million.

Disney is also hoping to develop “four to five” original movies during the first year, prospective projects including a live-action remake of Lady and the Tramp, Don Quixote (from Billy Ray – the writer of The Hunger Games fame), an adaptation of The Paper Magician, the Julia Hart-directed Stargirl, and Togo from Ericson Core. JJ Abrams will produce and direct Cloverfield 3, Star Wars IX, and there are also two projects in post-production already bound for the service: the Gillian Jacobs and Jeffrey Tambor starring Magic Camp and Anna Kendrick-led Noelle not to mention three “priority” projects: a remake of Three Men and a Baby, The Sword and the Stone and Spotlight directed adaptation of Timmy Failure.

Our view is that the pricing will be pitched at a competitive level, so that households will have at least 2 to 3 streaming successes, and PayTV likely to be lose market share. If anything, streaming directly to the consumer market on a global scale should see Disney grow even faster over the next decade, with competitors such as Netflix and Amazon not being able to replicate the brands and 60-year backlog of content.