Yesterday the volatility continued with initial strong gains in Asia being virtually wiped out during the end of the trading day with US futures down sharply. However, the market’s fear of another selloff wasn’t realised with the US indices up strongly at the open, and then giving all the gains at the close, but the markets are stabilising as the Dow and S&P500 intraday trade within narrowing ranges – this is a positive sign the “calm is returning to the farm” and things are settling down (see below).

And stability is what the markets most want to see at the moment. The “calm at the farm” closeout in the US on Wednesday should see an increase of risk appetite in Asia today with the futures all pointing to a stronger start. 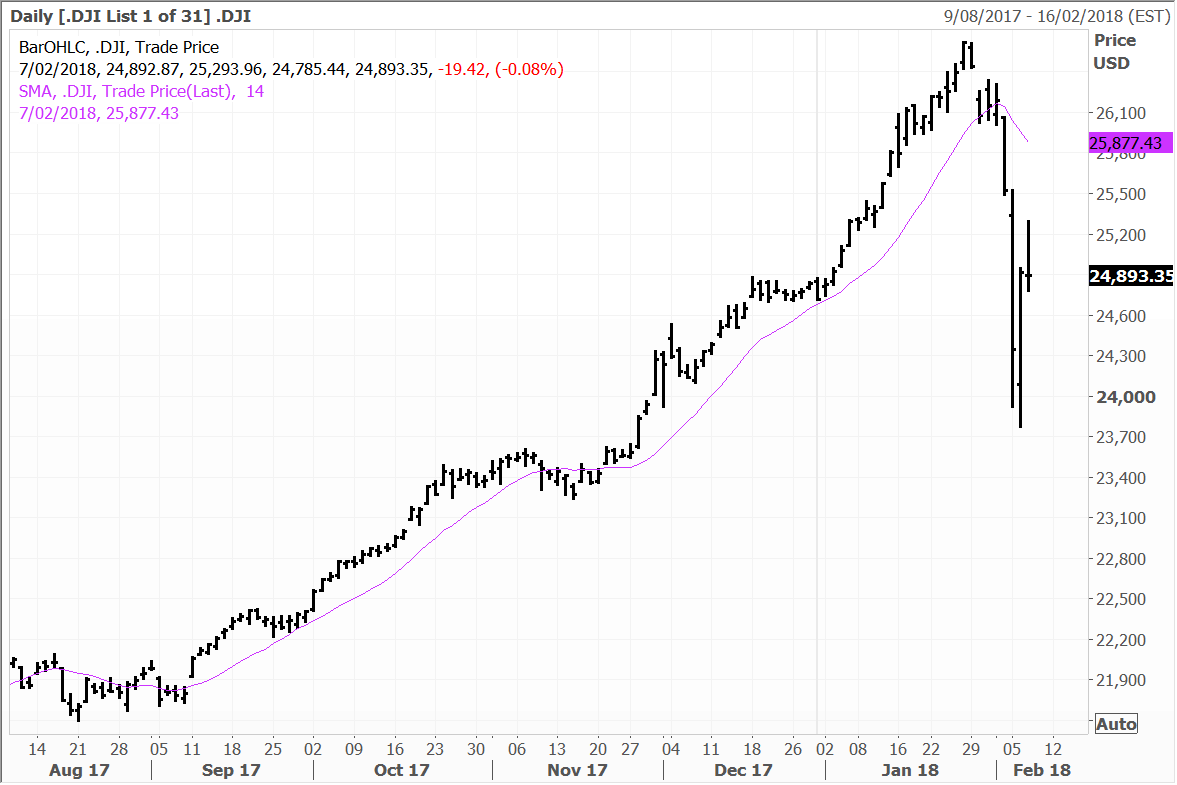 With the US indices consolidating after a sharp reaction this week, the VIX declined 16% to close at 25. The VIX had its single largest gain in one day history earlier this week so it will take a few days, if not weeks, for the volatility to settle down, albeit at much elevated levels compared to the record low range of the past 18 months.

The VIX is consolidating below historical resistance (see below), but I think near term it is unlikely to go much below the 14/18 level and we probably won’t see levels below 10 for some time. 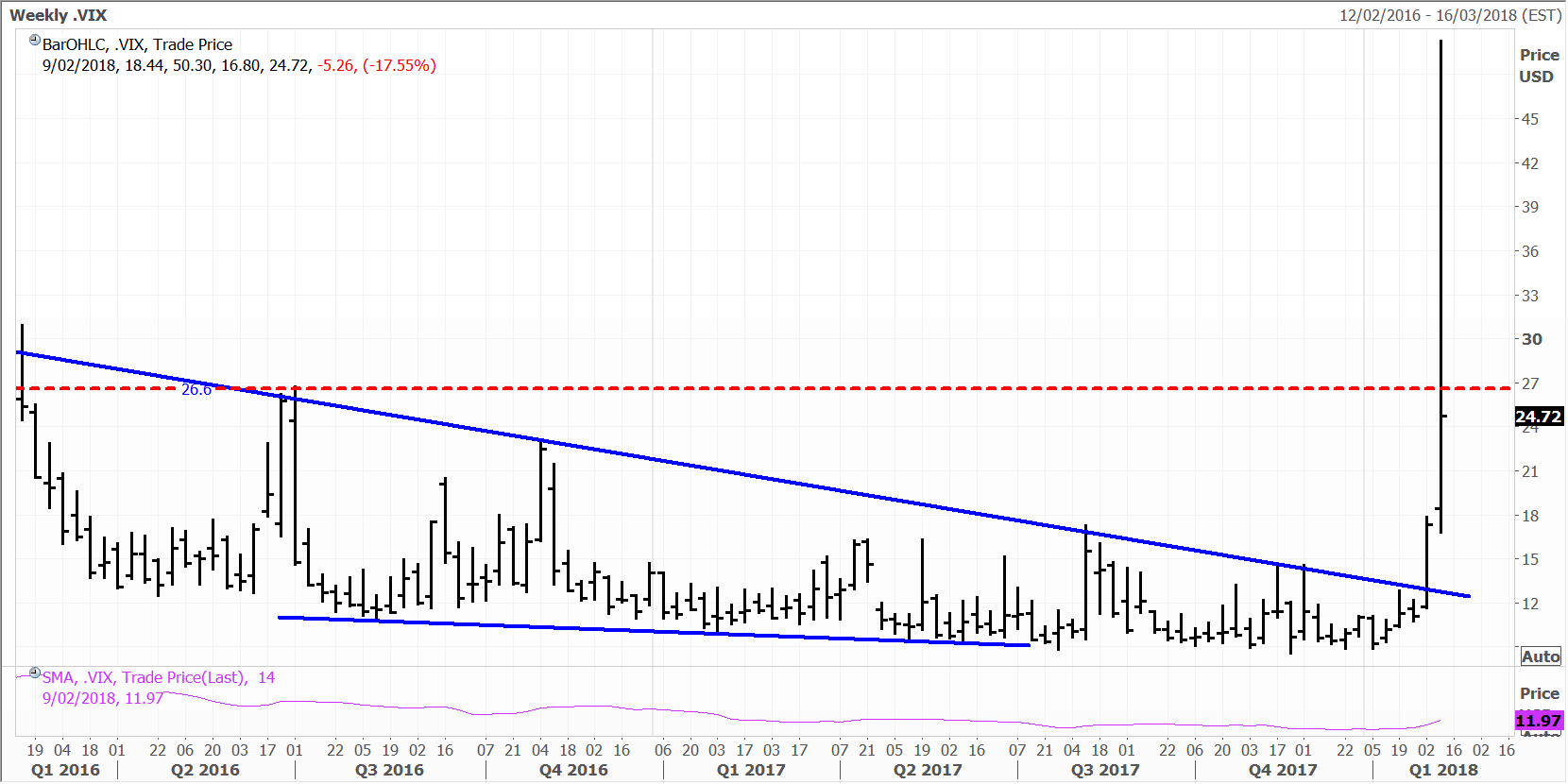 Yields on US Treasuries rose with the 10-year consolidating above significant breakout level from last week to settle at 2.83% – see below. The interesting point to note about the breakout in the 10 year bond is that when investors rushed for treasuries (to find a safe harbour) during Tuesday’s rout, the underlying yield respected the uptrend in place since December.

The yield is now within close proximity to the highs that were seen on Friday (which in turn was the catalyst for Tuesday’s selloff and volatility spike), and this probably explains the cautiousness in the stock-market. Investors are bruised and understandably wary of where yields are going.

Whilst I don’t think the 10 Year yield is going to punch through 3% tomorrow – this is a big resistance level – at some point rates will advance well beyond this. It is therefore a fact that the stock market is going to have to “acclimatize’ to a higher interest rate environment. Higher rates pushed the Dollar Index back above 90. The stronger greenback then weighed on commodity prices which were all down heavily with WTI oil losing 3%. 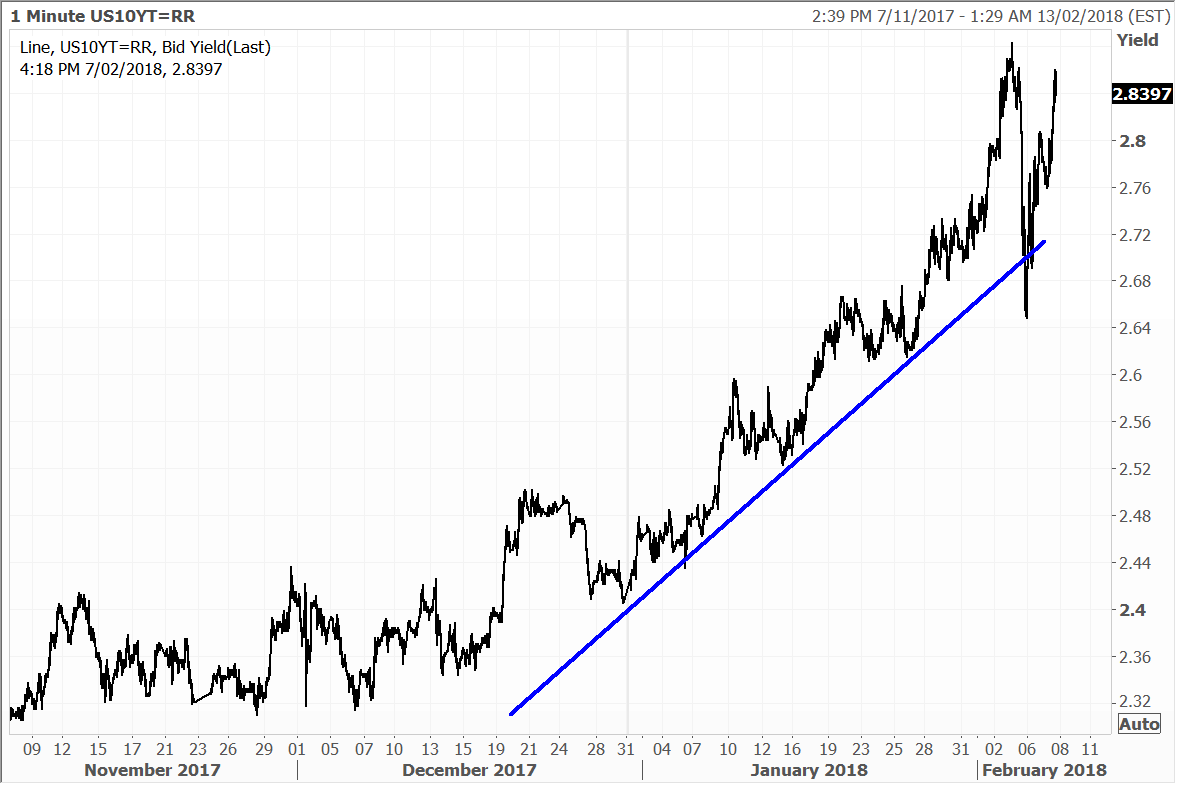 Walt Disney shares ticked up in early trading (but closed lower) after better-than-expected earnings in the most recent quarter (more on that later). Nasdaq-listed shares of Wynn Resorts were up strongly, rising 8.7%, after Steve Wynn resigned in the wake of sexual misconduct allegations that emerged over a week ago. We hold Disney and Wynn Resorts in the Global Contrarian Fund, the Global Opportunities and US Managed Account portfolios.

Spanish banks rose, with Bankia SA ticking up 1.0% and Caxiabank SA rising 2.1%. Both are held in the European Managed Account portfolio. ABN Amro (not held in our portfolios) was one of the few European banks that lost significant ground on Wednesday, dropping 3.4% in Amsterdam. The bank posted higher-than-expected quarterly earnings, but dipped after saying new regulations will significantly impact its risk profile.

It was a mixed bag for exporters in the technology and industrial spaces, with Sony shares up 1.5% on the day, while leading robotics company Fanuc saw its shares slip 2.0%. Shares of Energy company Inpex were up 1.3%. Sony, Fanuc and Inpex are held in the Global Contrarian Fund.

In terms of specific stocks, Tencent Holdings recouped a modest 1.2% in trading after falling from 52-week highs in recent days. Macau casino operator MGM China was a strong upside performer, rising 2.5%. The company recently opened a new casino on the Cotai Strip, significantly increasing its footprint in the Macau market, one I believe has strong growth prospects in the years ahead. Gaming revenue in Macau was up a whopping 36.4% year-on-year in January, blowing past expectations for a 27% increase and getting 2018 away to a strong start.

Trading in Wynn Macau was suspended and is set to resume today but confidence should return after Wynn Resorts jumped 8% on the announcement that Steve Wynn had stepped down (see below). Wynn Macau and MGM China are core holding in the Global Contrarian Fund, the Global Opportunities and Asian Managed Account portfolios, while Tencent is held in the latter two portfolios.

Wynn Resorts jumped 8 percent on Wednesday, as investors approved of the casino operator’s decision to give company veteran Matt Maddox the top job, replacing casino mogul Steve Wynn who resigned following sexual misconduct allegations. Wynn, 76 denied the accusations, but stepped down as CEO on Tuesday. Wynn still remains the largest shareholder with direct control of about 12% of the company, and indirect control of the voting rights over another 9% held by his ex-wife. This bodes well for the trading session in Wynn Macau which resumes trading today.

Wynn’s decision removes some overhang from the stock, which has lost nearly a fifth of its value since Jan. 26 when reports of the allegations first surfaced. The resignation reduces the risk of tarnishing the company’s brand along with licensing risk. Gaming regulators in Nevada and Massachusetts are investigating the allegations. In recent years, Wynn has been less involved with the day-to-day running of operations and more focused on his core strength of hotel design. There is no reason why he could not continue to have significant input into Wynn Resorts and Wynn Macau. 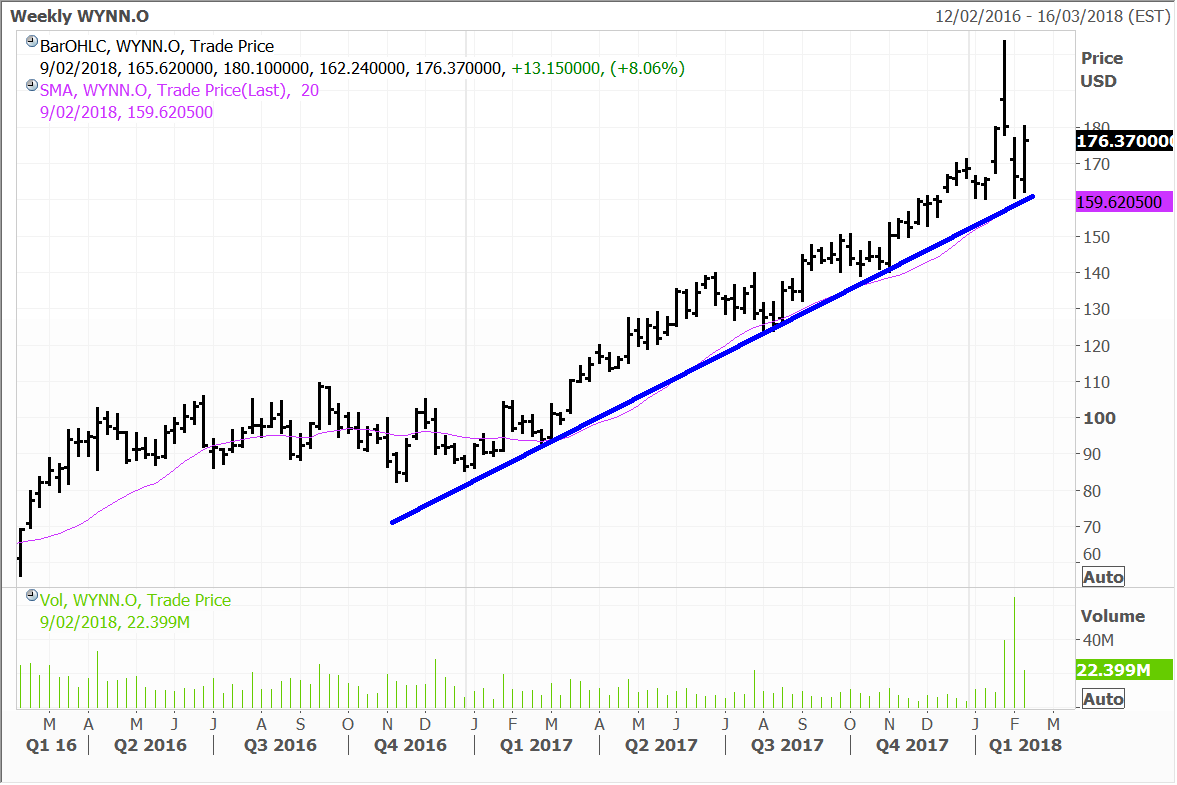 Walt Disney easily beat Wall Street’s earnings forecast when it reported after the bell on Tuesday, underpinned by a strong performance at its reliable theme park business. Crowds are apparently flocking to the new “Avatar” attraction. The media and entertainment giant posted adjusted earnings per share of $1.89 for the three months ended December 2017, well above the $1.61 analysts had expected according to Thomson Reuters. Theme parks were the standout performer in the quarter, with revenue up 13% to $5.15 billion and operating income up 21% to $1.3 billion.

Star Wars fans can sleep happy knowing there is yet another trilogy set in the Star Wars Universe on the way in the years ahead, although it may still be far, far away, for now…Disney didn’t provide a timeline for when the new trilogy will likely get underway and hit cinemas, but excitingly Disney has teamed up with Game of Thrones showrunners David Benioff and D.B. Weiss to produce the new films. And it is an extra three movies on top of the trilogy that The Last Jedi director Rian Johnson is on board for!

Kathleen Kennedy, president of Lucasfilm stated that Benioff and Weiss’s “command of complex characters, depth of story and richness of mythology will break new ground and boldly push ‘Star Wars’ in ways I find incredibly exciting.”

I agree, Game of Thrones has been hugely popular and brought George R.R. Martin’s complex world to life fantastically on the small screen. It will be fascinating and fresh to see Benioff and Weiss apply their magic to the Star Wars Universe without being constrained by the Skywalker saga limitations. Both Benioff and Weiss have said they are huge Star Wars fans. We might be waiting for quite a while though, because both have Games of Thrones final season to finish, which is expected to air in 2019.

We believe the market is underestimating Disney’s ability to monetize its treasure trove of content over the long-term through new technology. And don’t forget, the acquisition of certain Fox assets is only going to strengthen its position as the media and entertainment conglomerate with the best portfolio of in-house IP (intellectual property) content.

Launching new direct-to-consumer streaming services is one of Disney CEO Bob Iger’s biggest priorities at present. The company will price the new ESPN+ service at $4.99 per month and it will be available on a variety of platforms at the time of launch, slated for some time “this spring.”

According to Mr Iger’s comments on the call with analysts, the new ESPN+ service “will offer a greatly expanded array of programs and live events for sports fans who want even more content, as well as for fans interested in sports and events not currently featured on the main channels. This subscription service will feature thousands of additional live events giving fans access to more leagues, more teams, and more games than ever before, including Major League Baseball, Major League Soccer and the NHL, along with a rich array of college sports as well as Grand Slam Tennis, Boxing, Golf, Rugby, and Cricket that aren’t available on the ESPN linear networks. Additionally, ESPN+ will feature the full library of ESPN Films, including the highly acclaimed 30 for 30 documentary series, and we’re also creating a robust slate of high-quality original content exclusively for this platform.”

It remains to be seen how much of ESPN’s income attrition this new service can mitigate, but given technology trends it is a necessary initiative. The Disney streaming service slated for launch sometime in 2019 will have a broader appeal and could very well for a must for many parents. Disney is a core holding in the Global Opportunities and US Managed Account portfolios. 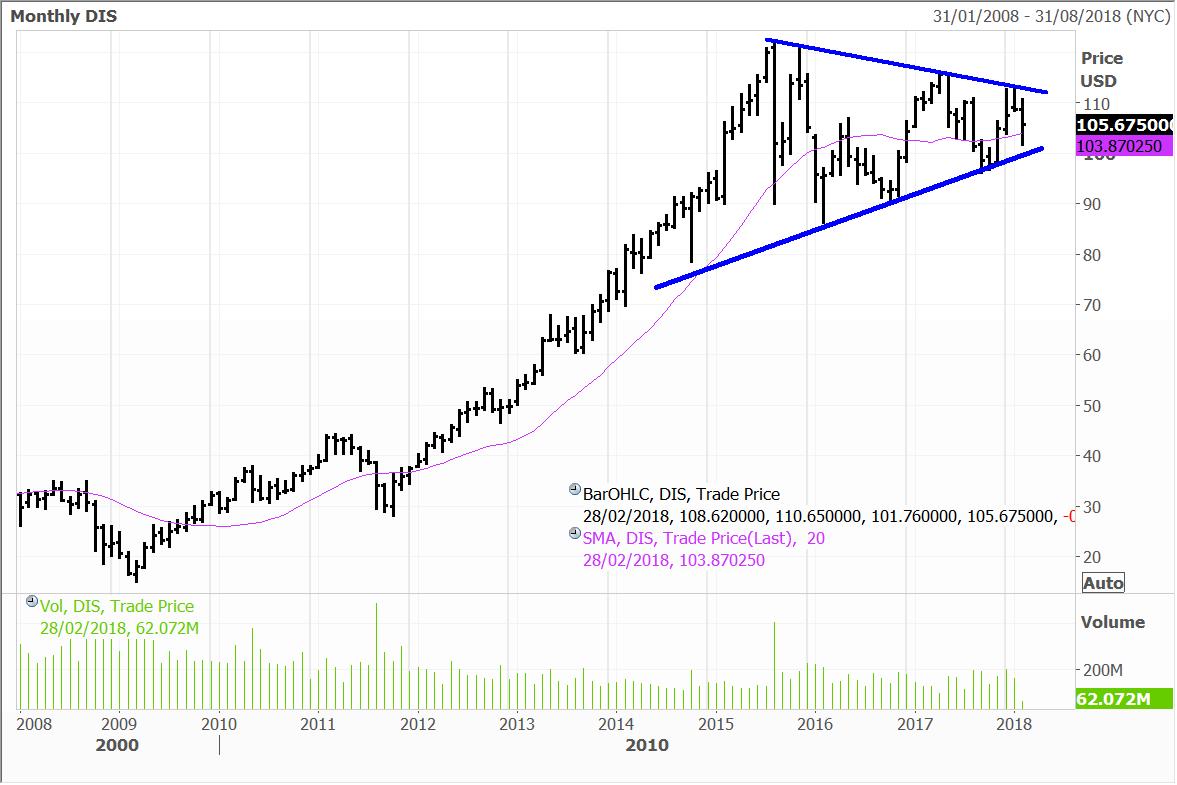