The US markets were mixed on Tuesday with the Dow falling 1% (mainly on the back of Walmart) while a rally in the Nasdaq petered into the close with a flat finish. The S&P500 ended 0.58% lower. Markets are continuing to settle down in the wake of the volatility surge with heightened sensitivity to the bond market. The minutes are due out from last month’s Federal Reserve meeting which will be looked to by the markets for clues about the monetary policy.

I wrote yesterday about the upcoming supply of bonds as the US treasury auctions of short and medium-term maturities gets underway – this will be an important test of demand and pricing. On Tuesday the US government’s short-term borrowing costs rose to the highest in more than nine years as $179 billion was raised in the bond market to fund spending and make debt payments. Tuesday’s Treasury auctions made up more than half of the $258 billion in supply scheduled for sale this week.

Yields on 2-year Treasury notes have lifted to the highest level in 10 years. The Federal tax cuts and potentially rising Government spending (if passed by Congress) on infrastructure and the military, are going to exert upward pressure on US interest rates and I think this is going to be a major pressure for the markets later this year – particularly so bond investors – who have enjoyed a one way bet for nearly 40 years. 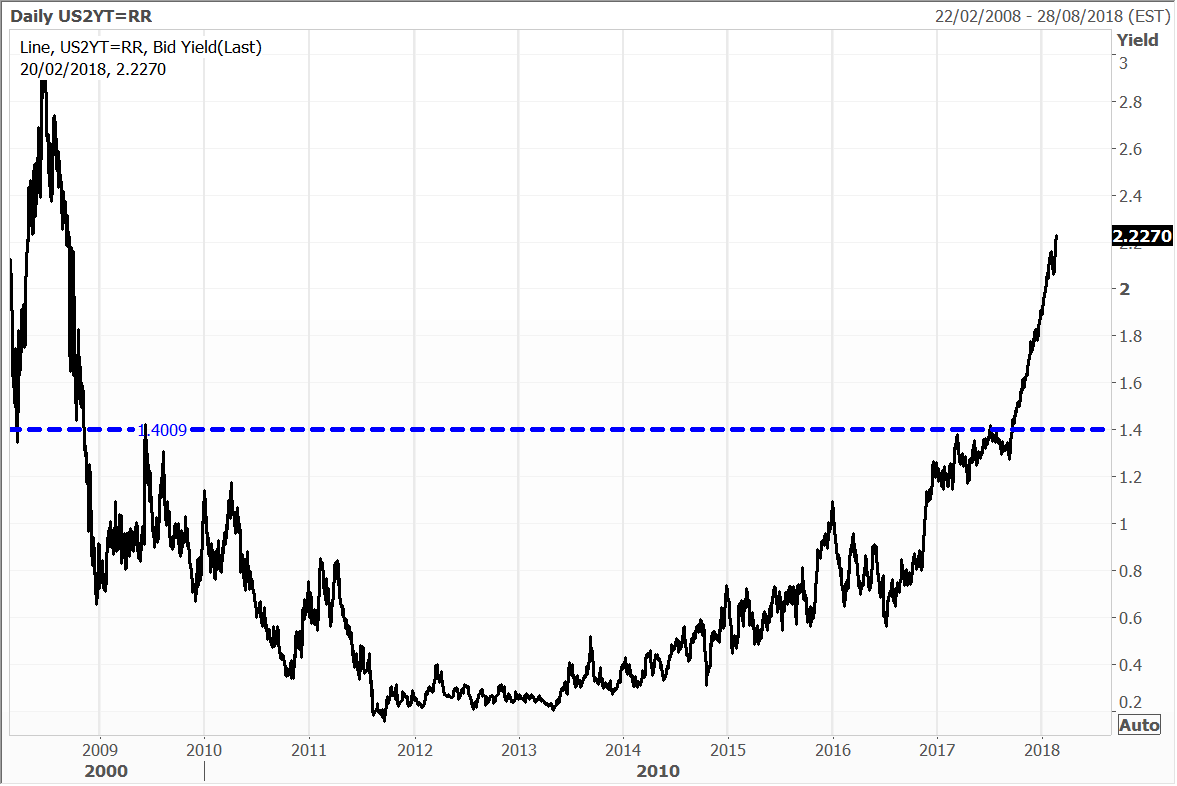 Turning to Europe, the pan-European Stoxx 600 advanced 0.6% for the day, while the Stoxx Europe 50 – which contains many blue-chip stocks – was up 0.8%. German-listed shares of Heidelberg Cement gained 0.3% in trading yesterday. The company is well placed to benefit from higher building materials prices and a pickup in infrastructure activity. In Spain, Bankia edged up 1.3% while Telepizza ticked up 1.2%. Banks did reasonably well in the regions, with the likes of BNP Paribus gaining 0.7% and Credit Agricole up 1.4%. Heidelberg, Bankia and Telepizza are held in the Global Contrarian fund and European Managed Account portfolios.

Turning to the UK, the benchmark FTSE 100 ended flat Tuesday (-0.01%) because of some negatively received results from some of the large caps.  Weighing on the FTSE were the likes of large-caps HSBC, BHP Billiton and Intercontinental Hotels. The Asia-centric HSBC is the second-largest London listed company in terms of market capitalisation. Pre-tax profit was up year-on-year, but below expectations and investors punished the stock. HSBC fell 3.1% in trading Tuesday.

BHP Billiton shares lost 4.6% in trading despite reporting a 25% increase in underlying profit for the half-year, boosted by higher metals prices. BHP also said it would boost its dividend. More on numbers later, but the reason for the dip in the share price seems to have been the miss on underlying profit and the emergence of some cost pressures.

In Asia, equity markets in China and Taiwan remained closed for the Lunar New Year holidays on Tuesday. Other Asian stocks typically fell in thin trading, with the absence of a lead from Wall Street (closed yesterday) and while investors waited for minutes from the latest Federal Open Committee meeting.

Japanese shares slipped after three sessions of gains, with the Nikkei down 1.01% as financial stocks and some index-heavyweights lost ground. Looking at the banks held in the Global Contrarian Fund and they held up reasonably well, with Mizuho down just 0.6%, Mitsubishi UFJ in the red to the tune of 1.1% and Sumitomo closing 1.2% lower. It was a day of broad-based selling in Japan.

As noted above the reaction to the BHP half year result in Northern Hemisphere trading was not positive, with investors fretting over a miss on consensus earnings, with rising costs a feature. Buy the rumour, sell the fact seemed to be the market’s attitude towards all the resource stocks. Fortescue reports today so we will have to see if there is more of the same.

BHP has had a good run over the past year or two, but I don’t go along with the glass half empty approach. Production has been robust, and pricing has been the real story, adding US$2.2 billion to earnings. This has enabled the company to deliver free-cash flows of US$4.9 billion, and with further pricing strength it puts BHP on target to match 2017’s US$12 billion. Debt has fallen 23% to US$15.4 billion, and swelling coffers are likely to see further capital enhancing initiatives and lifts in the dividend. The interim dividend was lifted to US55 cents which was ahead of forecasts.

And the company’s balance sheet is likely to get even fitter should it retreat from shale. With energy prices where they are, there should be plenty of interest, with Shell one possible suitor. The company’s upstream director Andy Brown said in an interview with Bloomberg that “BHP has good assets that overlap our own acreage in the Permian and “may be interesting for us”.

BHP will be weaker today in Australia, but I think that the bigger picture is still very much in play, with the company having tremendous leverage to further commodity price strength. We hold BHP in the Global Contrarian Fund and the Australian and UK managed account portfolios.

We also hold South32 in the same models, and as I wrote last week, I was encouraged by results from the BHP spin-off. The company has seen a number of broker downgrades over the past week, mainly attributable to a miss on production volumes. With the commodity pricing environment certainly amenable to generating profits, underlying earnings were up 14% at the half year, and management announced plans to return some US$378 million to shareholders in dividends. But clearly this was not enough for the market with S32 falling to $3.20 yesterday. I see this however as being more a case of buy the rumour and selling the fact. 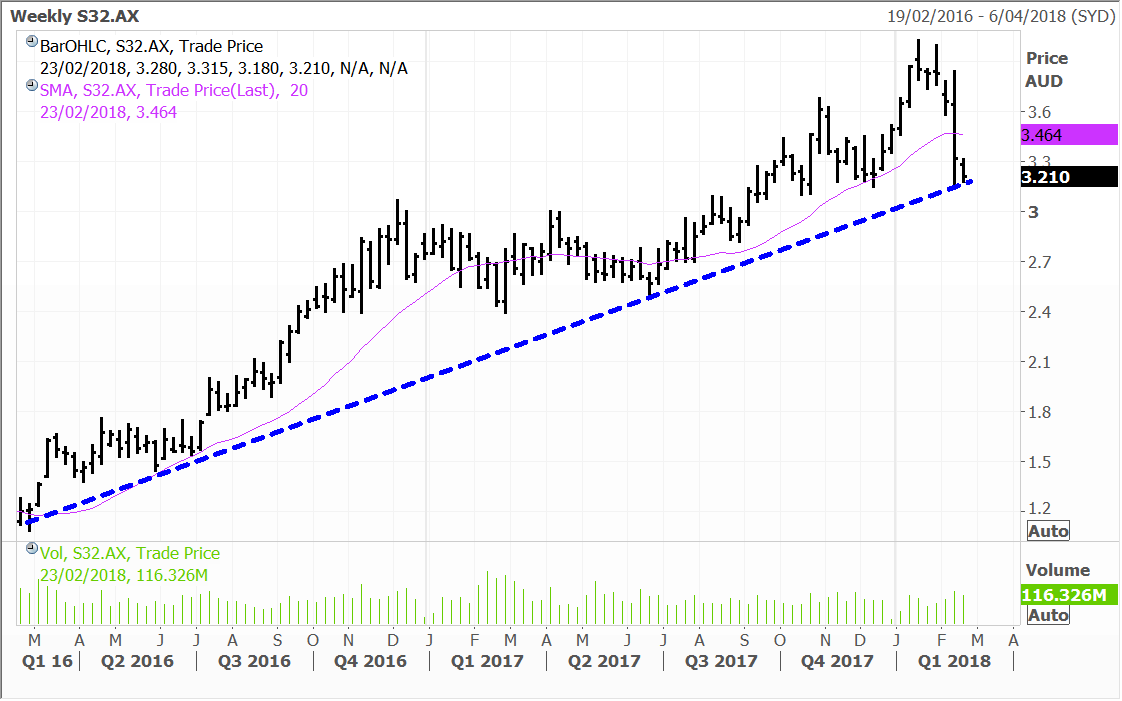 Much as with BHP though, South32 have had a strong run since the 2016 lows, but I would say that it has delivered on the re-rating. I think there is more upside to come, with base metal prices yet to reach a cyclical peak. The brokers that are moving to ‘underperform’ or even ‘sell’ will more than likely be backtracking in 6 months’ time when the market starts to look ahead to the next reporting cycle and should our scenario of higher commodity prices play out.

BHP Billiton reported interim revenues of $21.8 billion, as copper revenues surged almost 52%, buoyed by higher prices and production from the Escondida mine in Chile. Revenue from iron ore mining, BHP’s biggest division edged up 4% to $7.2 billion, while revenue from the petroleum division was up 8% to $3.6 billion.

The underlying profit came in at $4.05 billion, up 25% on the $3.24 billion reported a year ago. Still, the result was a little shy of the $4.3 billion the market was expecting. After adjusting for a previously flagged $1.8 billion one-time charge related to the change in US tax rules, net profit fell 37% to $2.02 billion.

As noted above, free cash flow generation was strong at $4.9 billion and the company said it expects this to grow to around $7 billion in the second half of the fiscal year if commodities stay at current levels. The miner continued to slice its debt pile, paring it by 23% to $15.4 billion and is on track to reach its $10 billion to $15 billion debt target before the end of the year.

The strong cash flows and underlying profit facilitated a nice bump in the dividend, which was boosted 37.5% to $0.55 per share, equivalent to a 72% payout ratio. BHP Billiton is held in the Global Contrarian Fund and the North American Managed Account portfolios. 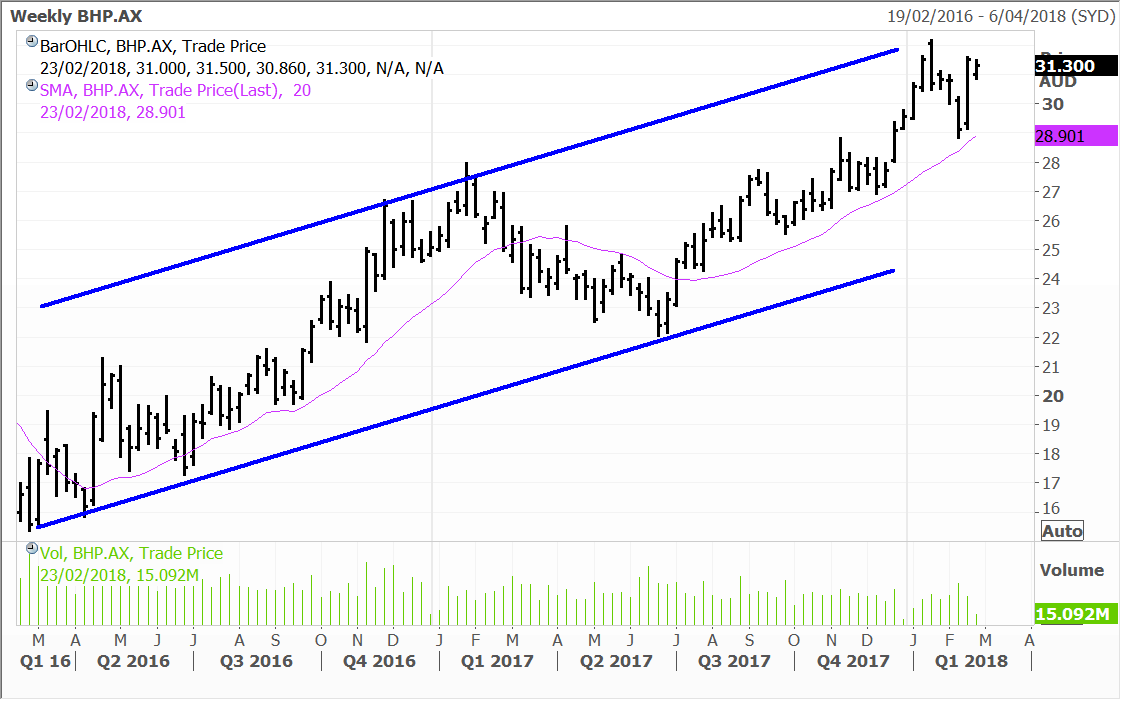 The Hong Kong-listed stocks of the Macau casino operators were standouts on the upside yesterday, as it was reported the number of tourist arrivals into Macau over the holiday weekend was up 10% from the equivalent period in 2017.

The total number of tourist arrivals from February 15 to February 18 was 500,404 according to official figures. Sands China shares gained 1.1%, Wynn Macau shares rose 1.6% and MGM China surged 4.2%. The latter company recently opened a new multi-billion-dollar property in Macau, massively enhancing its footprint in the world’s largest gaming hub. All three stocks are held in the Global Contrarian Fund, the Global Opportunities and Asian Managed Account portfolios. 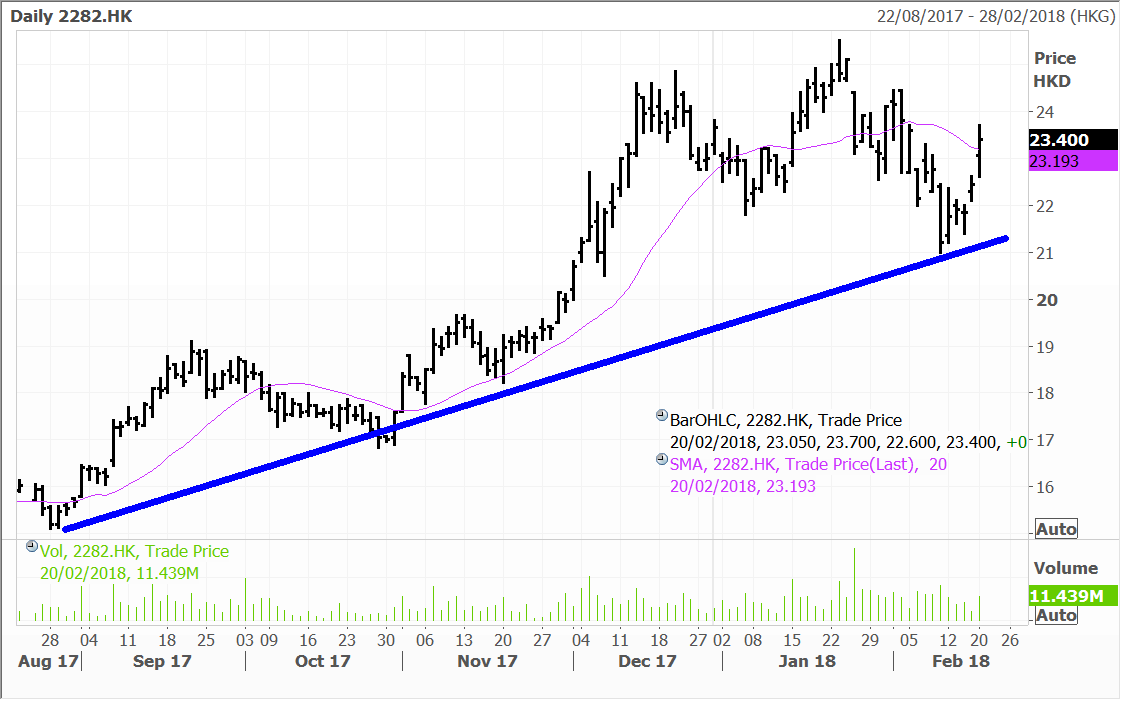 Sony said on Tuesday that it has plans for a joint venture to develop a taxi hailing system based on artificial intelligence (AI). Sony is a core holding in the Global Contrarian Fund and has been riding high in recent years on the success of its PlayStation and image sensors businesses, while stemming red ink in other areas and looking for new ventures to grow.

Japan is considered a potentially lucrative market for ride-hailing as current strict rules exclude non-professional drivers from offering taxi services. And as those who have spent any time in a taxi in Japan know, taxi prices can be steep.

For now, ride hailing services are limited to matching users to existing taxi fleets via online platforms, but regulators are under pressure to ease these rules.

According to media reports, Sony plans to build its AI-based platform with Daiwa Motor Transportation and five other domestic taxi firms. It is quickly becoming a crowded space though, as earlier this month SoftBank and China’s Didi Chuxing (which effectively muscled Uber out of China) declared their intention to provide matching services in Japan. Also, Toyota has said it will take a stake in JapanTaxi, a taxi-hailing service set up by Nihon Kotsu, which has Japan’s biggest individual taxi fleet. 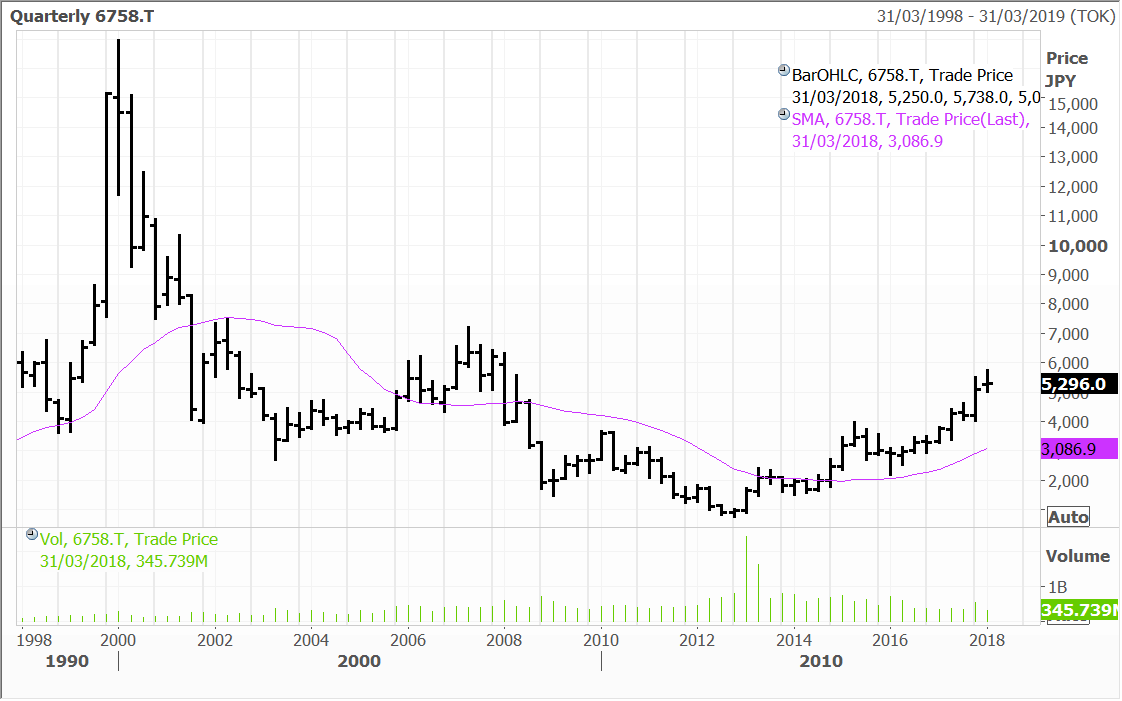