Stocks initially advanced in the US on Wednesday but after accelerating into the close, following the release of the FOMC minutes, dramatically reversed course. The Dow Jones, S&P500 and Nasdaq closed down 0.67%, 0.55% and 0.22% respectively. After pacing the gains, the Dow Jones Transports and Russell 2000 closed up 0.3% and 0.12% respectively.  The release of the FOMC minutes from the last meeting initially pushed the indices higher into the close but the rally faltered as bonds began selling off. Equities are sensitive to the bond markets and with the yield pushing up towards 2.94% in the wake of the minutes, the rally in the stock market lost momentum to finish in negative territory. 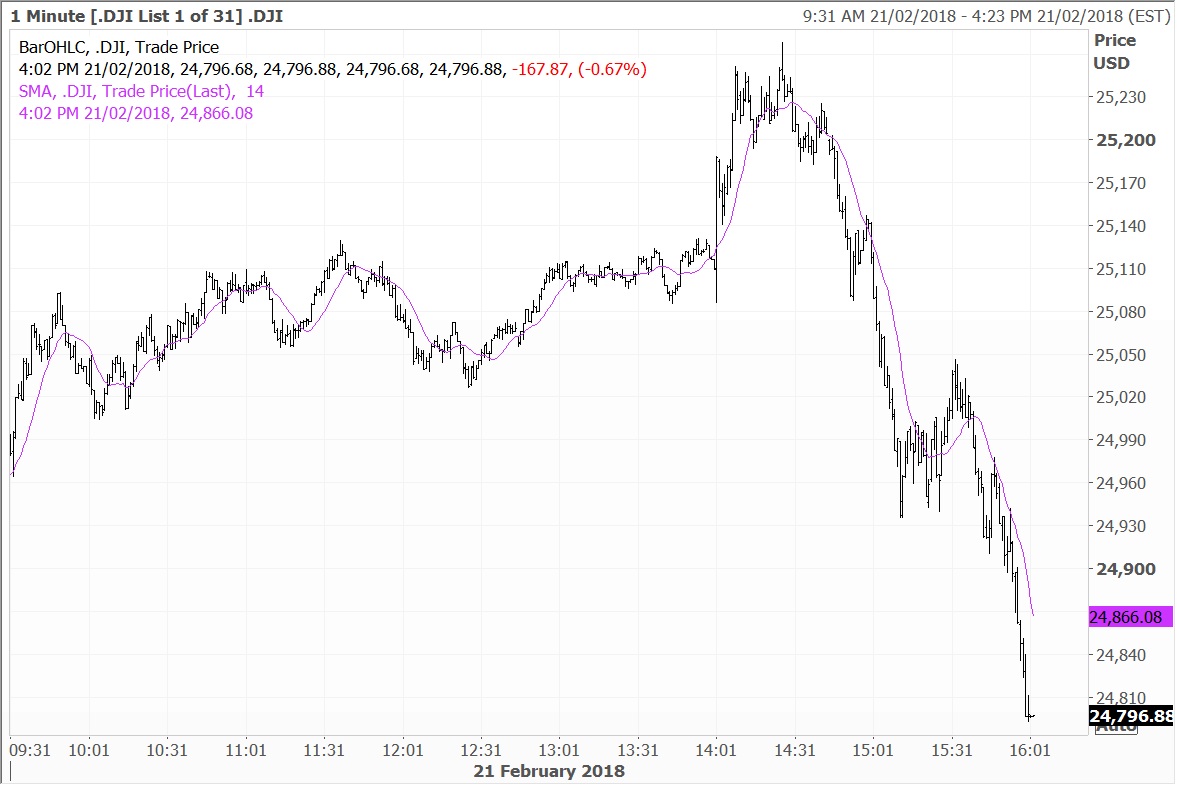 The yield on the 10 Year T Bond pushed up to make near term highs above 2.94%. The 3% level marks significant resistance with markets not really prepared for a short-term push above the barrier. The upward trend in the 10 Year yield has been very consistent since November/December last year – see below. We have shorted US T bond futures along with other key bond markets, in the Global Contrarian Fund, and will add to these positions when opportunities arise. 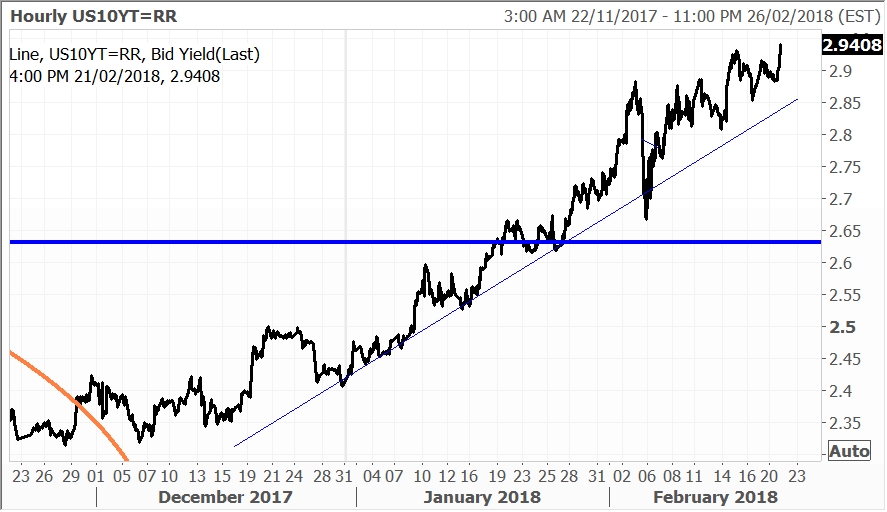 Discussion at the last Fed meeting revealed a “more upbeat outlook for inflation” which virtually locks in the rate hike (that the market is expecting) at the next board meeting in March. The minutes went on to reveal that “members agreed that the strengthening in the near-term economic outlook increased the likelihood that a gradual upward trajectory of the federal funds rate would be appropriate.”

The minutes went on to record that “recent data received by voting members on inflation “along with prospects for a continued solid pace of economic activity provided support for the view that inflation…would likely move up in 2018. Almost all participants continued to anticipate that inflation would move up to the…2 percent objective over the medium term as economic growth remained above trend and the labor market stayed strong”.

The next FOMC meeting scheduled for March 20th/21st is shaping up to be an important one as it will be the first time that new Chair Jerome Powell will address the markets on the economy. He will likely be sized up by the markets, which are currently expecting little deviation in terms of the police stance of his predecessor, Janet Yellen. However, unlike Janet Yellen and Ben Bernanke before her, Jerome Powell is from the private sector and does not have the same academic background. I see this as being a positive for the Federal Reserve.

The Reuters Commodity Index corrected sharply (see below) in line with the markets earlier this month, but has held the uptrend that began in January 2016 (when we called an end to the bear market). I believe the recent sell-off in commodities and resource stocks generally, is nothing more than a correction that has probably now terminated. The upward advance in the resource sector will likely resume shortly. 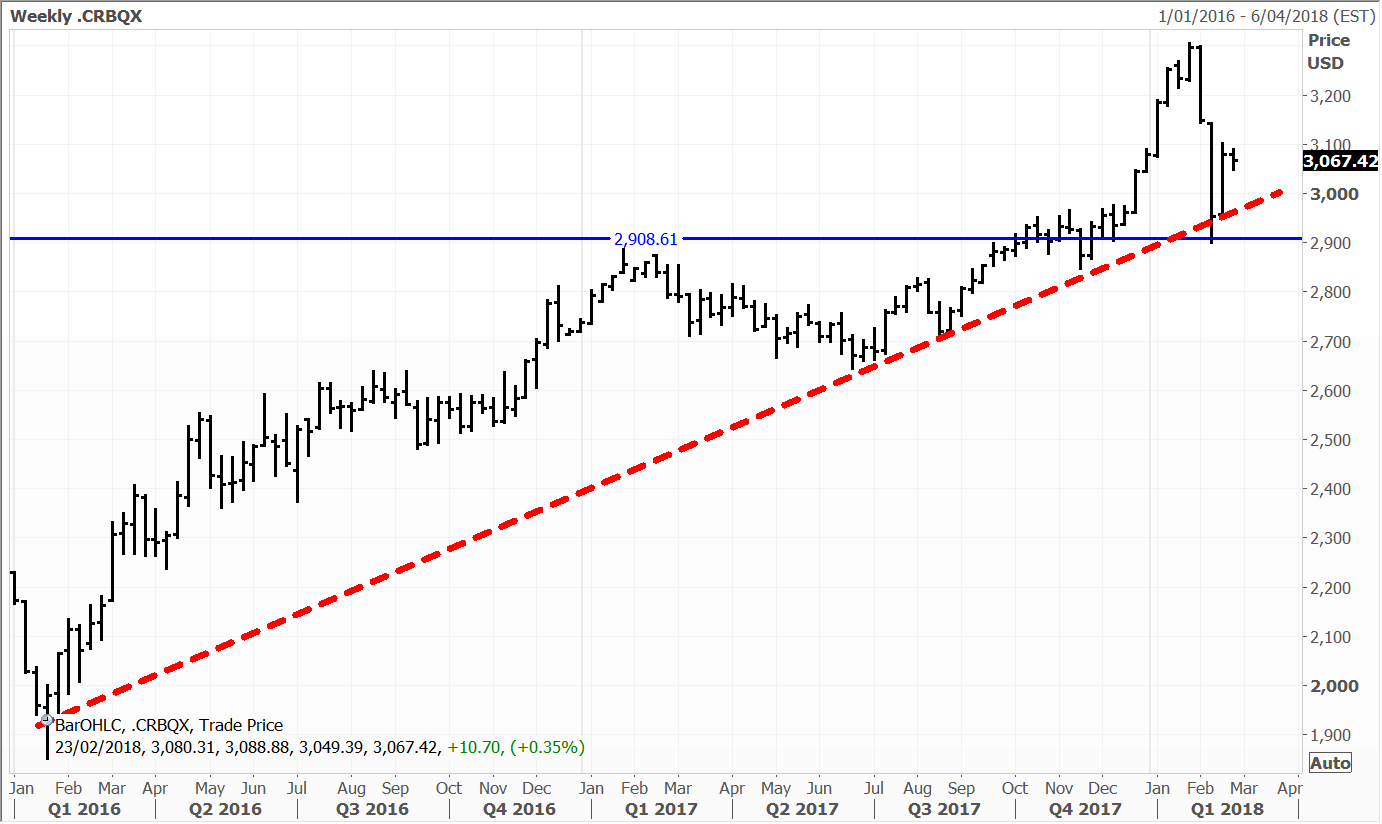 Commodities trader Glencore also recently reinforced this thematic saying that “the potential of synchronized global economic growth, emerging inflation, supportive commodity fundamentals and the emerging electric-vehicle story suggest a positive outlook for commodities.” I believe that the recent sharp selloff in key resources companies such as Rio, BHP and South32 (not to mention Woodside and Fortescue) opens up selective buying opportunities to gain exposure to this thematic.

Transportation stocks did well for much of the session, along with oil service, gold, technology and banking stocks. Natural gas plays were among the laggards. Shares of Google parent Alphabet rose 0.9%, while its Chinese equivalent Baidu gained 0.6% (and was up as much as 2.7% during the day), following Morgan Stanley’s upgrade to outperform last week. Shares of logistics giant FedEx, which has been a strong performer for the Global Opportunities account, rose 1.4%. Shares of budget airline JetBlue gained altitude, up 3.6%. JetBlue is recommended our US research team.

Baidu, the Chinese online search giant and a leader in the development of AI (artificial intelligence), beat on the top and bottom lines when it reported last week. The company also confirmed its plans to list its video streaming business iQIYI, sometimes called the Netflix of China, in the United States. The details are yet to be firmed up, but Baidu plans to remain a majority shareholder. Given the valuations we have seen ascribed to other Chinese video streaming platforms, a listing is likely to unlock some value for Baidu shareholders. Baidu is a holding in the Global Contrarian Fund, while Alphabet is held in the Global Opportunities Managed Account portfolios.

Asian stocks bounced back from a weak start to mostly close higher Wednesday. Trader sentiment seemed cautious though as yields on benchmark US Treasuries hit fresh four-year highs Tuesday and investors were waiting on clues from the minutes of the Federal Reserve Monetary committee on Wednesday US time. China markets were still closed for Lunar New Year.

The benchmark Nikkei index ticked up 0.21% in Japan as the yen weakened against the greenback (US$), offsetting soft manufacturing data. Growth in Japan’s manufacturing sector slowed in February as new orders and output rose at a slower rate according to preliminary survey results from IHS Markit. The flash manufacturing PMI (purchasing manager’s index) moved to 54.0 in February, down from 54.8 in January.

In terms of sector movers, financial stocks such as banks, brokers and insurers were generally weak on the day. Among the banks, Mizuho was down 1.1%, Mitsubishi UFJ minus 2.0% and Sumitomo closed 1.2% lower. Insurer Dai-Ichi Holdings lost 2.4%.

Exporters and technology companies fared better. Sony gained 1.5% and Nissha Co surged 4.5%, extending its strong run this week. Nissha is a world leader in touch screen technology and has been a strong performer over the past few days after reporting strong sales and earnings for the year ended 31 December 2017. Mizuho, Mitsubishi UFJ, Sumitomo, Sony and Nissha Co are holdings in the Global Contrarian Fund.

Stocks gained in Hong Kong, with Hang Seng up 1.81% for the day. Energy shares led, followed by technology and financial stocks. Oil and gas major CNOOC gained 2.6% and insurer Ping An was up 1.8%. Social media and video gaming giant Tencent Holdings surged 2.7% and is back near all-time highs.

The Macau casino operators generally extended their gains Wednesday, with Sands China up 0.5% and MGM China gaining 1.5%. Wynn Macau was the exception, down 0.2%. As we reported yesterday, the number of tourist arrivals into Macau over the holiday weekend was up 10% from the equivalent period in 2017. The total number of tourist arrivals from February 15 to February 18 was 500,404 according to official figures.

In Australia it was another big day on the corporate earnings front, with results generally strong, and some significant announcements alongside the numbers. Not least of which came from Fairfax Media, which is closing 28 mastheads in New Zealand with CEO Greg Hywood opening the door further to alliances domestically.

Fairfax Media delivered a strong gain, rising 5% after half year results were released. Earnings were down on last year, but investors responded positively to an acceleration of the company’s cost out plan, with immediate action being taken in New Zealand, and the potential for further synergies in Australia.

I have warned previously in this note about the knock-on consequences of the New Zealand Competition’s decision to block a merger between Fairfax’s NZ arm and NZME. In doing so, the NZ regulator has failed to acknowledge the dramatic changes in the media landscape, and it really being a case of “kill or be killed.” Well the ball is rolling well and truly, with Fairfax killing off 28 mastheads in New Zealand, with consequent job losses, but ultimately savings to the bottom line.

The action also reflects an increasing tilt towards digital, which is profitable, and with print media a dying art form. As CEO Greg Hywood noted, “We have enormous confidence that Stuff [the company’s main kiwi news portal] is heading towards sustained growth as its digital business continues its strong momentum…We have acted decisively to bring this forward, and are announcing today a plan to exit around 35 percent of our New Zealand print publications through sale or closure. The rationalisation of these smaller community titles and free inserts will deliver additional ebitda contribution over a full year and bring forward the time when increases in digital revenue outweigh declines in print.”

This is a sign of the times, and also reflects that digital is very much the future, for the industry, the company, and earnings growth. In terms of the half year results, earnings before interest, tax, depreciation and amortisation (EBITDA) was up 1.3% to $146.9 million while underlying net profit fell 9.9% to $76.3 million.

At the bottom line, net profit after tax fell to $38.5 million from $83.7 million a year ago. Revenues dipped marginally by 4% to $877 million, but the earnings were impacted by one off write-downs and restructuring charges. The NZ mastheads were chipped away at again, and their book value of $175 million is a far cry from the $1.1 billion when the assets were bought off Rupert Murdoch’s Independent Newspapers in 2003. 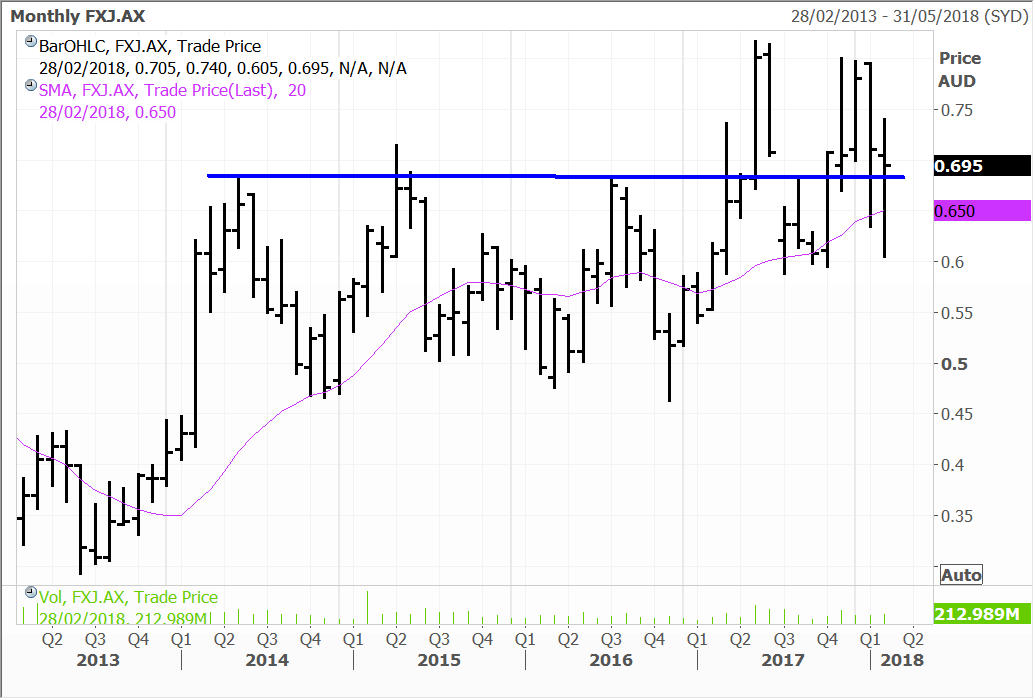 This is also not surprising that the two competitors are working together further given the changes in the industry which are affecting both companies. This is also why we see value in the print side (along with the brand leverage into digital), where little is being ascribed by the market. We hold Fairfax Media are held within the Fat Prophets Concentrated Australian and Small/Mid-cap Managed account Portfolios, as well as the Fat Prophets Global Contrarian Fund.

Of course, the growth in digital is another big angle, which we saw in Domain’s results (Fairfax has a 60% stake), and in Fairfax’s other divisions. Net paid digital subscriptions for the Sydney Morning Herald, The Age, and the AFR record their strongest uplift in four years. Steaming video service Stan (a JV with Nine) , also saw an 83% increase in subscription revenue, and now has an active subscriber base of 930,000.All in all I continue to be very positive on how our original investment thematic with respect to both Fairfax and Domain, is playing out.