Monday was quiet for the financial markets with the United States closed for President’s Day, while Hong Kong and China were shut for the New Year Lunar holiday. The US Commerce Department is proposing that President Trump’s administration impose curbs on steel and aluminium imports from China and other countries.

Japan’s steel industry however has urged Trump to make a careful trade decision. Japan’s Iron and Steel Federation Chairman Kosei Shindo said in a statement “the recommendations violate the principles of free trade, which are the foundation for development and prosperity of the global economy. We hope Trump would make a careful and appropriate judgement”. Japan exports about 2 million tonnes of steel products a year to the United States, which is only about 5% of its total steel shipments abroad.

Speculative short positons on two-year Treasury futures (and longer maturities) have been cut dramatically over the past few weeks. It will therefore be “all about supply” during what is going to be “a closely watched auction” later this week when the US Treasury sells off a quarter of a trillion worth of new debt. All eyes will be on just how easily the market absorbs this new supply. 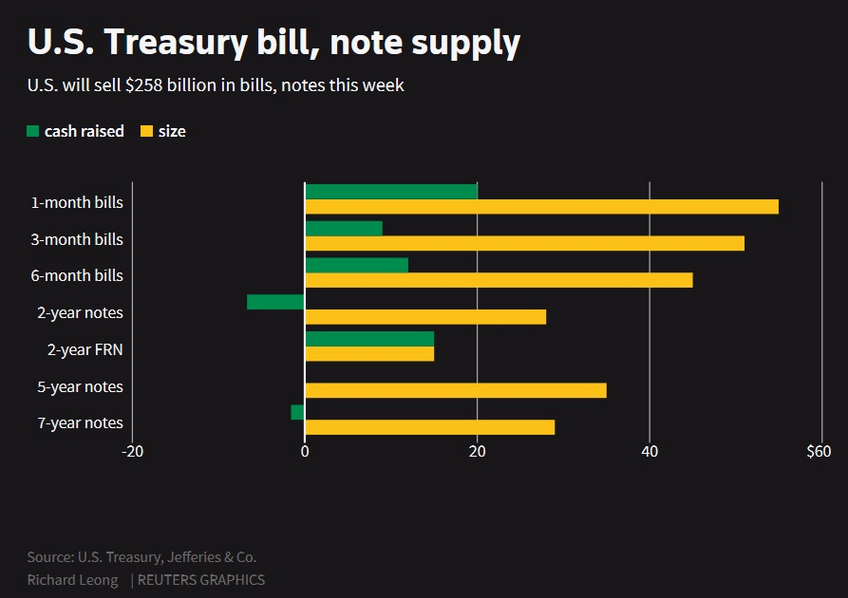 While near term factors such as higher yields and higher levels of volatility have induced some fund managers to reign in short positions, I see this more as another opportunity to take advantage of what we see as a ‘temporary firming of bond yields’ and add to short positions. The biggest reversal was in the two-year futures, according to the latest positioning data from the Chicago futures markets, and in the week to February 13th, net short positions were slashed by 76,772 contracts to 133,986.

That’s less than half the record net short of 329,066 contracts just two weeks ago. The reduction in speculators’ net short positions of almost 200,000 contracts in that period is the second largest two-week fall in bearish bets ever. This is a decent “flush out”, and I see this really as being the next “setup’ in the bond market before yields on the 10s test the 3% barrier. We will be adding to our short positions in the longer dated debt market as opportunities arise.

The sharp reduction of speculative short positions in 10 Year T Bond futures sets the market up for the next test of the 3% barrier. This is still a significant hurdle, having capped the US bond market below this level since 2011. Consequently a “number of attempts” maybe required before the 3% barrier finally gives way.

European stocks slipped in choppy trading Monday. The pan-European Stoxx 600 slipped 0.63% for the day, while the Stoxx Europe 50 – which contains many blue-chip stocks – was down 0.67%. Steel companies were among the biggest gainers for the day after the proposed curb on imports by the US Commerce Department.

Daimler, the owner of Mercedes was another weak stock, falling 2.1% after reports investigators found that its cars had software which may have helped them pass emissions tests. Volkswagen shares shrugged those reports off to gain 1.2%.

Spanish banks ticked up, with Bankia gaining 0.6% and Caixabank rising 1.2%. Shares of Telepizza Group SA were up 0.6% as Spain-listed stocks fared relatively well versus the region.

The China and Hong Kong stock markets remained closed on Monday due to the Lunar New Year holidays. Japanese equities gained in thin trading, as the yen weakened and trade data bolstered sentiment. The benchmark Nikkei gained 1.97% as exporters and financials rose.

Japan had a merchandise trade deficit of ¥943.4 billion in January according to the Ministry of Finance, marking a 14% improvement from a year earlier. It was also better than the expected shortfall of just over ¥1 trillion. Exports grew 12% surpassing the expected 9.4% growth rate and rising from a 9.3% climb in December. Imports were up 7.9% compared to a forecast of a 7.7% increase.

Turning to some individual movers Monday and shares of Nissha Co jumped 6.7%. The company is a world leader in touch screen technology and has been a strong performer over the past few days after reporting robust sales and earnings for the year ended 31 December 2017. The stock is a holding in the Global Contrarian Fund.

Japan’s big banks had a strong day, with the likes of Sumitomo up 1.8%, while Mizuho and Mitsubishi UFJ both gained 2.2%. Shares of robotics expert Fanuc surged 3.7%. All four stocks are held in the Global Contrarian Fund, Global Opportunities and Asian Managed Account portfolios.

In Australia the market had a firm start to the week, with the ASX200 posting a gain of 37 points to 5,941. A solid start to the reporting season trumped offshore factors, and one of the notable results came from Domain Holdings Australia which delivered some strong interim earnings numbers, and its first as a listed company. Shares in Domain rose 4.5% while Fairfax Media (which holds a 60% stake) was up 4.9%. We hold both Domain and Fairfax in the Concentrated Australian and Small/Mid-cap Managed account Portfolios, as well as in the Fat Prophets Global Contrarian Fund.

Domain and Fairfax have seen some weakness of course after last month’s shock announcement that Domain CEO Anthony Catalano was stepping down just two months after the company’s IPO. We maintained that the sell-off was overdone, with the market focusing on the man and not the company’s investment fundamentals – which shone through yesterday. Other candidates are capable of leading Domain and the company confirmed yesterday that the search process was continuing.

As an aside, the reason posited at the time for Mr Catalano’s abrupt departure were so he could spend more time with ‘family.’ This possibly had the market nervous that there was more to it than met the eye. Indeed, it has since emerged that elements of a ‘Weinstein-like’ culture were in place under Mr Catalano’s stewardship. It was probably therefore for the best that the CEO moved on, otherwise the fallout down the track may have been much worse.

Aside from the near-term underperformance of Domain since the IPO, the reality is the company is performing well financially, and confirming our original investment thesis. Pro-forma earnings before interest tax and depreciation (EBITDA) rose 8.7% to $56.8 million, on revenues which grew 12.5% to $183.3 million. Higher product development and capex depreciation saw net profit fall 8.1% to $24.7 million. The result though was in line which reassured the market, and the company declare a maiden interim dividend of 4 cents per share, 30% franked. 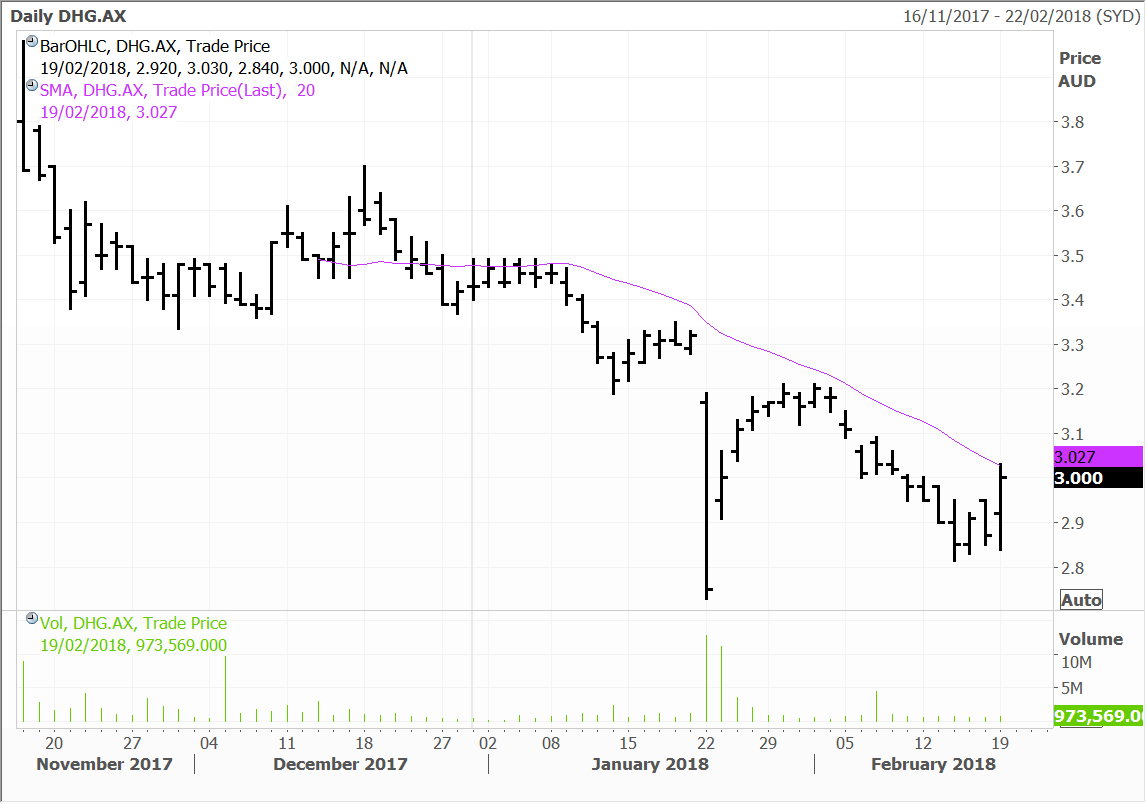 We have backed Domain due to the growth in the company’s high quality digital properties, and this was clear in yesterday’s result. Core digital business, which includes the Domain website, saw revenue rise 18.5% to $128.6 million, while EBITDA surged 22.7% to $55.9 million. Margins were also heading in the right direction, rising to 43.4% from 42.0% in the same period a year ago.

We believe that Domain can play catch up with larger competitor REA, and there were some positive trends in evidence at yesterday’s results. Residential mobile inquiries were up 21%, while the number of downloads of the Domain app has reached 6.1 million, and with an 18% uplift in app launches.

I think there is more growth to come, and it was interesting to hear management talk about the opportunity in Queensland where the company’s degree of penetration is less than NSW and Victoria. Market listings in the state are running strongly, and as I have often remarked this is a region which has lagged the hot spots, and which we are positive on. Rising inbound tourism, and a constrained dollar, could see some catch up in the Queensland property market, and provide a material growth angle for Domain.

As for the print side, this remains in decline. Revenues and earnings fell 11.6% and 25.4% to $43 million and $10.5 million respectively which is a sign of the times. The structural decline in print will only gather pace, but Domain is certainly reacting, taking costs out (expenses down 6% year on year), and with further efficiencies on the horizon.

Overall the story at Domain continues to look very positive in my view, and I expect the shares will ultimately push well beyond last year’s highs. We will also see some similar themes coming through in my view at Fairfax which is due to report tomorrow.