US equities finished in the red on Friday, as investors took to selling down technology shares once again. The modest downtick in the major indexes occurred even though the earnings season has got away to a solid start overall. The Nasdaq led the way to the downside, slipping 1.27%, followed by the S&P 500, down 0.85% and then the Dow, which dropped 0.82%. Despite the softness on Thursday and Friday though, all three indexes finished in the green for the week, with the Dow up roughly 0.4%, the S&P 500 advancing 0.5% and the Nasdaq adding 0.6%.

Friday’s action in the markets centered on Bonds with the yield on the US 10 Year Treasury rising to the highest level in more than four years to 2.96%. Whilst the US indices came off on Friday, the steepening of the US yield curve is a “positive” development, despite the corrective selloff in February which was triggered by the yield going above 2.9%. Recessions are typically preceded by a drop in the yield at the longer end of the curve as capital chases “safer harbours” and funds are channeled into bonds.

However, I think what drove the selloff in yields that pushed 10-year T bonds to 2.96% on Friday is a growing awareness and acceptance that inflation is about to rise. With the reassertion to the upside in yields at the longer end of the US yield, our view is that it is only a matter of time before the 3% level on the 10-year will give way. Stock markets are going to have to acclimatize to higher normalized interest rates.

A succession of new highs, combined with higher reaction lows, confirms an uptrend is in place for yields, and that US bonds are on the cusp of a major secular bear market – the first in decades. 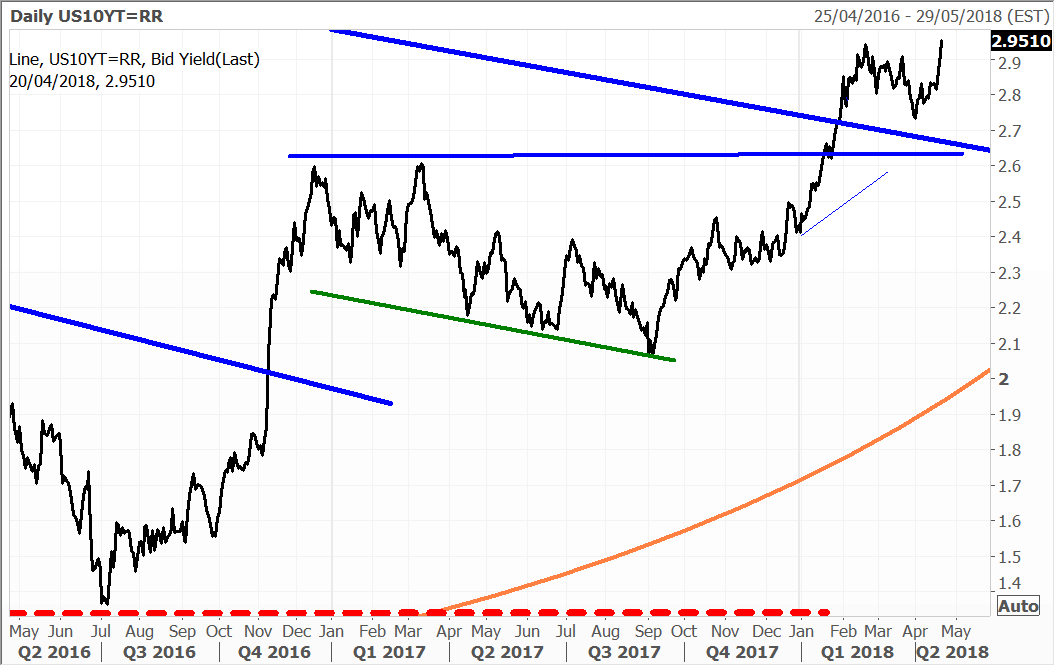 The good news for the stock market is that equities are a generally a much “safer harbour” when inflation begins to rise, and bank stocks in particular are a principal beneficiary of a steeper yield curve and higher long-term interest rates.

Other technology stocks also felt the pressure, with Google parent Alphabet slipping 1.1%, and online Chinese search giant Baidu closing 1.9% lower. Walt Disney slipped 0.6%, despite being in Morgan Stanley’s ‘Fresh Money Buys’ list. Morgan Stanley have highlighted Disney as a “high conviction” buy for pretty much the same rationale as we have identified.

In a day of generally subdued trading across the continent, the banks BNP Paribas, Societe Generale, Credit Agricole and Credit Suisse rose between 0.5% and 1.0%. Pizza firm Telepizza advanced 0.8% and the world’s largest luxury goods retailer LVMH eked out a 0.2% gain, following on from strong trading over the past two weeks. Stocks on the other side of the ledger for the day included the likes of Volkswagen and travel technology specialist, Amadeus, both down 0.9%.

Turning to Hong Kong, amid a sea of red ink, China Mobile added 0.4%. Oil & gas major CNOOC lost 2.4%, internet giant Tencent Holdings slipped 1.4%, while insurer Ping An was 0.3% lower even as a subsidiary has book building for an IPO – more on that later. The Macau casino stocks also fell on profit taking, with MGM China, Sands China and Wynn Macau closing 0.2% to 2.8% lower.

A bounce in the US$ is always going to be one potential headwind, but there are more than enough reasons to counter this in our view. We therefore remain overweight the resource sector and the high-quality producers. This includes the likes of South32 which rallied 3% last week. The stock is now back around all-time highs, and has performed well, and in defiance of a couple of brokers who have underweighted the stock. 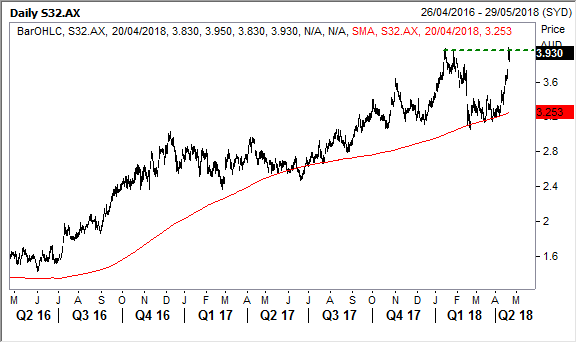 Rising commodity prices are going to create a circular inflationary loop, and this will be relevant to Australia on a number of levels. It will be positive for the stock market and the economy, but will also likely start impacting local inflation. We have the first quarter CPI numbers out tomorrow, and these are always keenly watched, and particularly by the RBA. The central bank though in my view is unlikely to be jumping the gun in raising rates any time soon, with inflation still likely to be held back overall by a lack of wage growth. A strong employment market should see this come through the system, but perhaps not until next year.

Gold will also benefit from rising inflation, although some will tell you otherwise. Greg Smith was speaking with a staunch crypto-currency advocate over the weekend, who was suspicious about the manipulation of the market for the precious metal, and also paper currencies. He has a good point on the latter, with central banks able to turn on the printing the presses if they so wish.

Conspiracy theories over the bullion market have always abounded, and range from the fact that gold reserves at Fort Knox in the US haven’t been audited for decades, and that prices in London are ‘fixed.’ No ‘currency’ is perfect, but I would rather back gold that I can hold in my hand, and has stood the test of time, rather than a bitcoin which I cannot see, is not regulated at all, and which remains barely understood by the masses.

On the subject of gold, Evolution Mining was under pressure on Friday with a fall of 5%. This came following the announcement by the La Mancha Group that it had sold down a 5% stake or approximately 85 million shares in the company. The announcement was made by La Mancha post the release by Evolution of its’ March quarter 2018 activities report.

I am not overly concerned though by the partial sell-down. La Mancha retains some 254 million shares in Evolution equating to approximately a 15% interest. La Mancha has not provided any commentary around the balance of its holding in Evolution Mining, but it continues to hold a far greater value in shares than it has sold. We will not propose to guess on La Mancha’s motives in selling, but the company will have generated a handy profit on the trade. We would expect with no further La Mancha action with regard to its remaining holding that the Evolution share price will stabilise.

The shares have also had a strong run, rising almost 50% from the lows in early October, and a large shareholder taking some gains off the table should not in itself be a cause for concern. Particularly if we are right that gold prices are going to go higher yet. 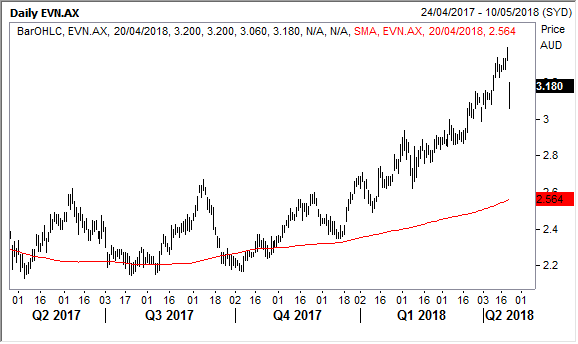 The quarterly report from Evolution was also very solid in our view. Gold production was 191,474 ounces, while all-in sustaining costs (ASIC) hit a record low of A$768 an ounce. For the full year management have forecast ASIC to be A$780 to A$820 an ounce (down from the previous estimate of A$820 to A$870), while guidance for full year output has been improved to 790,000 – 805,000 ounces (from the previous 750 – 805,000). Resources were also lifted and these positive trends further increases Evolution’s leverage to rising gold prices.

India’s HDFC Bank announced a 20% increase in net profit for the quarter ended 31 March on the back of higher net interest income. The bank posted a net profit of Rs4,799 crore compared to Rs3,990 crore the same time last year. The number was slightly below the Rs4,858 crore that the market was expecting.

The market responded positively to the numbers with the shares gaining 0.8% in Friday’s session. HDFC is a holding in the Global Contrarian Fund and is held in the International managed account portfolios. 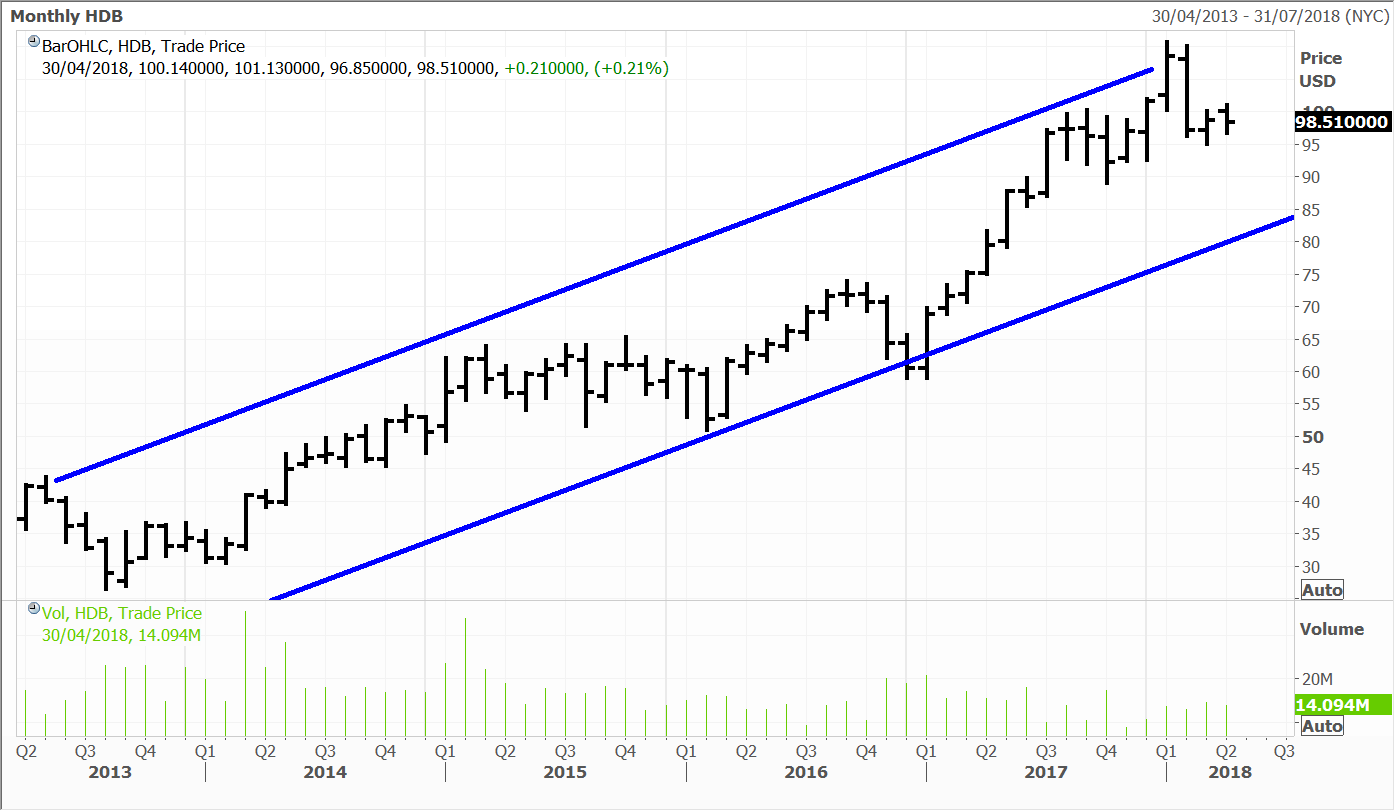