While Alphabet reported a 73% jump in quarterly earnings, this failed to have much of an impact on the markets, which paid more attention to the rising yield on the 10-Year T bond which touched 2.99% on Monday. The Nasdaq fared the worst, dipping 0.25%, while the Dow edged down 0.06% and the S&P 500 was flat (+0.01%). Monday’s declines were balanced by the Dow Jones Transports finishing up 0.4%.

The Greenback was the main beneficiary of rising US interest rates and this weighed on gold and silver – both down 0.8% and 2.8% respectively while the Dollar Index lifted nearly 1%.  The yen lost nearly 2 big figures against the US dollar.

Among sectors on the move, precious metals stocks were under pressure on the back of modestly lower gold prices. The recent weakness in tobacco stocks continued, with the benchmark index for the industry group hitting its lowest intraday level in two months. Steel stocks were also facing some meltdown on Monday. Faring relatively better were energy, healthcare, housing stocks and transportation.

The 10-year T Bond yield has made four-year highs at 2.99% in the first real test of the psychological 3% barrier 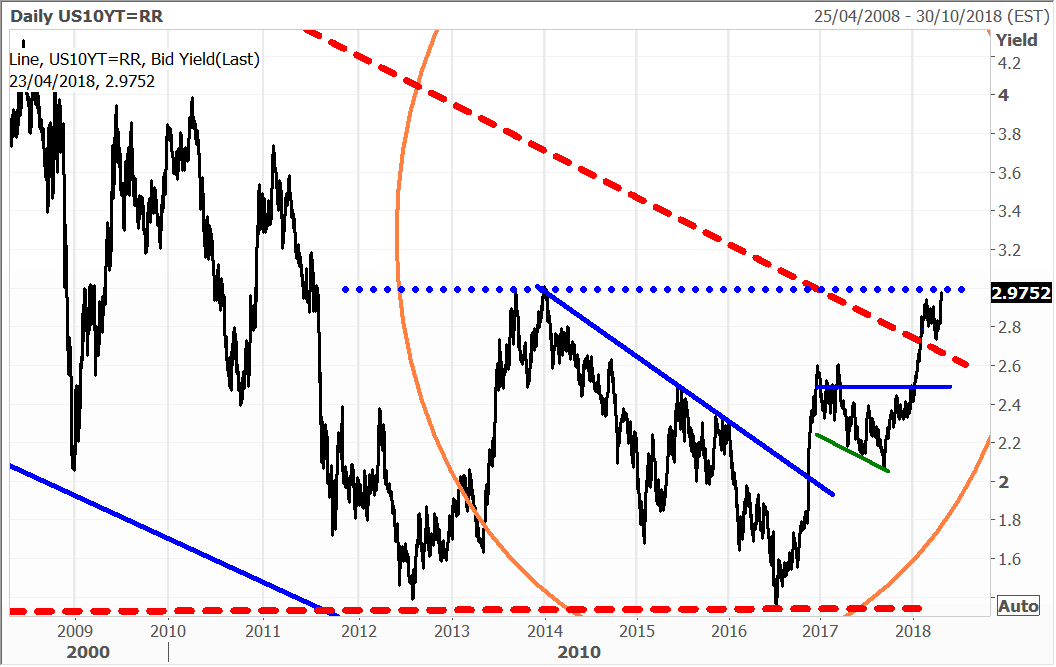 US bond prices fell on climbing yields and this now puts the 10-year at the highest yield in over four years – see above. Concerns about the growing supply of government debt and accelerating inflation on the back of rising oil and commodity prices were cited on Monday. I have thought this for some time. The US Treasury Department has confirmed it will sell a combined $96 billion in coupon-bearing securities this week, starting with $32 billion in two-year notes on Tuesday. So clearly supply is a concern, but I think the bigger issue is inflation.

The result should support technology names in trading tomorrow, with Apple slipping 0.3% Monday and online search giant Baidu – sometimes called the Google of China – drifting down 0.5%. Consumer staples giant Kimberly-Clark reported higher than expected sales and profits, but still shed 1.5% in trading as investors rotate out of the sector. Walt Disney shares were effectively flat (-0.1%) even as its newest Marvel blockbuster is due to hit cinemas this week. More on Disney later.

Across the continent banks were generally higher, tracking US bond yields north. Caixabank and Bankia were up 1.4% and 0.6% respectively. BNP Paribas, Societe Generale, Credit Agricole and Credit Suisse rose between 0.6% to 1.1%.

Pizza firm Telepizza added to gains on Friday, up another 0.9%, while the world’s largest luxury goods retailer LVMH added 0.8%, following on from strong trading over the past two weeks. Italian air traffic controller ENAV was up 0.5% and Heidelberg Cement advanced 0.4%.

Chipmaker Rohm slid 2.4%, while linear motion expert and components supplier THK dipped 0.6%. Truck maker Hino Motors ticked up 0.3%, while energy firm Inpex slipped 0.9%. The megabanks Mizuho, Mitsubishi UFJ and Sumitomo gained 1.0% to 2.0%, while Dai-Ichi Life was one of the strongest performers in the index, surging 4.0%.

In Hong Kong, China Unicom was one of the strongest blue-chips on the day, rallying 3.3%. More on that later. Ping An Insurance advanced 0.7% as its online health subsidiary is doing the rounds for an IPO. Internet giant Tencent Holdings was caught up in the technology sell-off, closing 1.5% lower. The Macau casino stocks also fell, with MGM China, Sands China and Wynn Macau closing 0.5% to 1.8% lower. This follows strong gains over the past year for the group.

The big producers therefore look well placed in our view, including Alumina and BHP – which yesterday hit a two-month high, and is also only 30 cents or so away from four-year highs. The shares rose 1.2% to $31.23 as a court in Brazil postponed the deadline for a compensation plan for Samarco dam failure which killed 19 people. BHP and JV partner Vale have till 25 June to negotiate a framework for settlement with federal prosecutors. The 2015 incident was a tragedy, but the companies have been working constructively to make amends and right the wrongs to the extent possible. 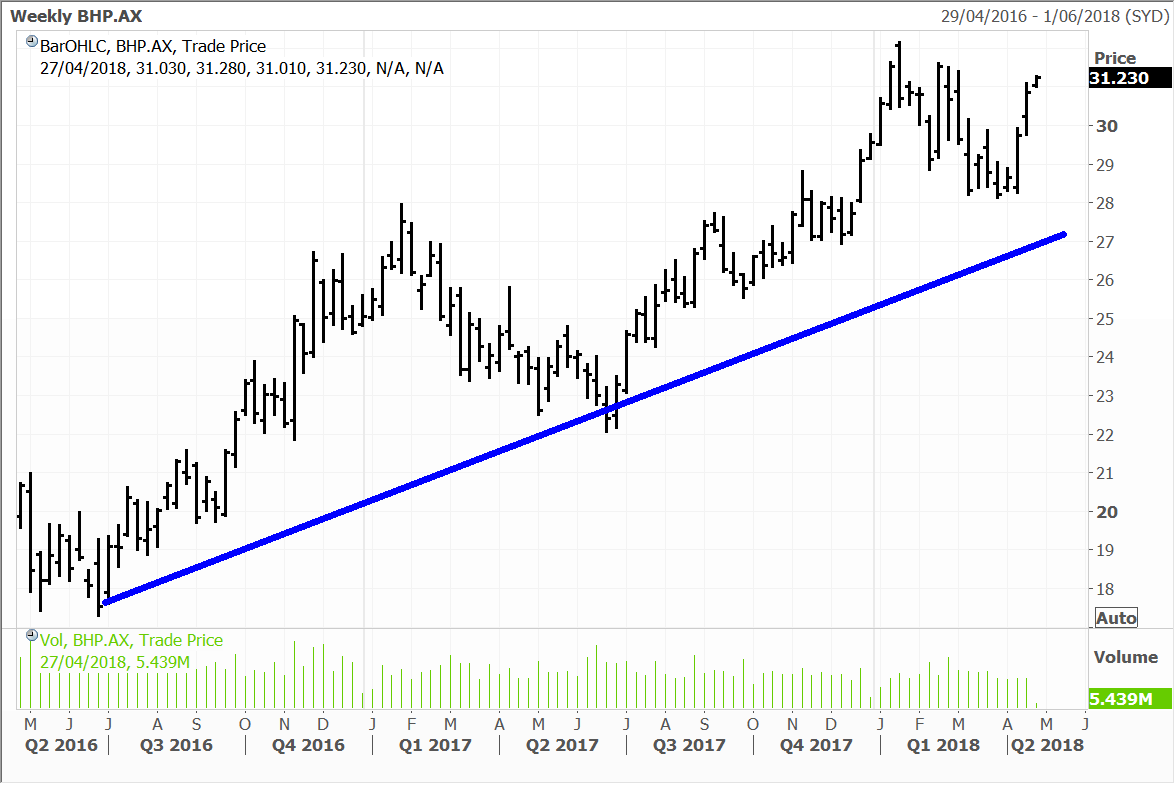 Walt Disney’s latest superhero extravaganza, Avengers: Infinity War, is going wide release this week and will be riding the wave from Black Panther’s tremendous success at the box office. The latter movie now has a domestic box office cume of $681.1 million and a global take of $1.32 billion, ranking it in the top 3 domestic and top 10 globally. The estimates for the latest Avengers iteration vary widely, but it is sure to be another $1 billion plus blockbuster for Marvel and parent Walt Disney. Global audiences have flocked to Marvel movies and there are no signs of fatigue.

Disney was recently upgraded by Morgan Stanley’s and is on their ‘Fresh Money Buys’ list and is rated a “high conviction buy” by the research team. A recent presentation from Disney CEO Bob Iger was interpreted bullishly.

A lot of Morgan Stanley’s rationale resonates with our own investment case. Disney shares have fallen comparatively out of favour, setting the shares up for a strong recovery, especially as the company is adapting to the new technology landscape.

Despite the changing landscape for cable TV, content is king, and Disney is a business with arguably the best portfolio of entertainment content on the planet, potentially about to get even stronger. It also has an impressive track record in the monetisation of that content. We believe the company will continue generating significant returns from that ever-expanding portfolio for shareholders in the years ahead, and that the new approach in going direct to the consumer will pay off in the future.

The Fox acquisition is a transformative one and a successful completion would cement Disney’s position as the entertainment business with the best portfolio of in-house content.

The Parks and Resorts business is a strong and steady performer and the new Shanghai property has got away to an impressive start. The ‘halo’ effect from the resort is likely to significantly boost Disney’s business in China over the next few years. We believe we are already seeing this with recent Disney animated movies showing strong performances at the Chinese box office.

Disney’s Studio Entertainment division is in better shape than it has ever been. In fiscal 2017, it was up against a tough comparative period from the prior year but should return to growth in fiscal 2018, with a strong line-up coming to cinemas. The above, combined with an undemanding valuation, makes Disney a strong investment opportunity in our view. 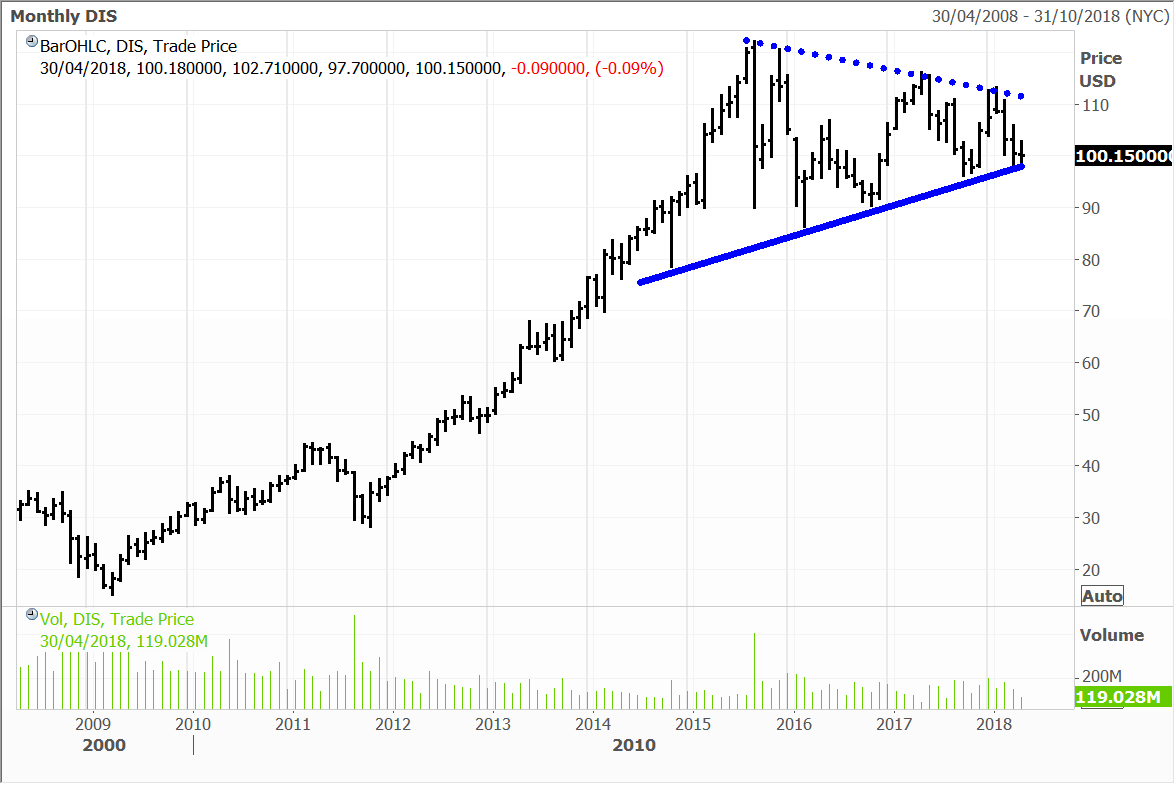 India’s largest bank by consolidated assets, ICICI Bank announced the release of a digital application facility on smartphones and tablets that will enable bank employees to open bank accounts for customers. Self-employed individuals or businesses will now be able to set up a current account in a few hours where the average industry processing time is a couple of days.

Thanks to the new digital account opening application, bank officials will be able to capture information about the client or business in real time and verify the KYC documents – while the customer is present. The new application makes the account opening process quick and easy without the lengthy paperwork with photocopies and photographs.

MD & CEO of ICICI, Ms. Chanda Kochhar said: “ICICI Bank has always leveraged technology to pioneer digital innovations and provide world-class banking experience to its customers. In line with this vision, we are delighted to introduce the country’s first process of opening a current account in a digital manner. This unique proposition heralds a new era of opening current accounts in a few hours, a marked improvement over a few days taken earlier.”

“We believe that the ease of doing business is a key parameter for businesses and organisations when they look for a banking partner. To this endeavour, we are leveraging technology in the business banking space to provide unparalleled speed and ease of banking. We believe that this direction will enable us to grow our current account and business banking portfolio faster than the industry, thereby increasing our market share.”