Major indexes on Wall Street moved firmly higher on Thursday, supported by bond yields drifting off recent multi-year highs and strong results from big technology names. The tech-heavy Nasdaq outperformed, finishing the day up 1.64% on the back of robust releases from Facebook and Advanced Micro Devices. Shares in the two tech titans finished up 9% and 14% respectively. After the bell Baidu and Amazon also delivered quarterly earnings beats with both shares up around 7% in after-hours trading.

The results have added to what has been a generally very strong start to the earnings season, and boosted broader market sentiment. The S&P 500 gained 1.04% and the Dow was 0.99% higher. I think this goes to what I have been saying that a strong sequence of earnings releases will confirm the underlying strength of the economy (US and global) and help trump recent fears over trade wars, rising bond yields, and geopolitical tensions. It also helped on Thursday that the US 10-year bond rate pulled back from the 3% mark to 2.98%.

As I wrote yesterday the US markets have formed an interesting technical pattern, with a converging triangle formation. While there is plenty to ‘worry’ about (when is this not the case?) I see this being resolved to the upside with a strong earnings season likely to prove the trump card as far as markets are concerned. There have been some fantastic results and significant beats at the bottom and top lines, while CEOs have seldom been as upbeat on corporate outlooks in decades. 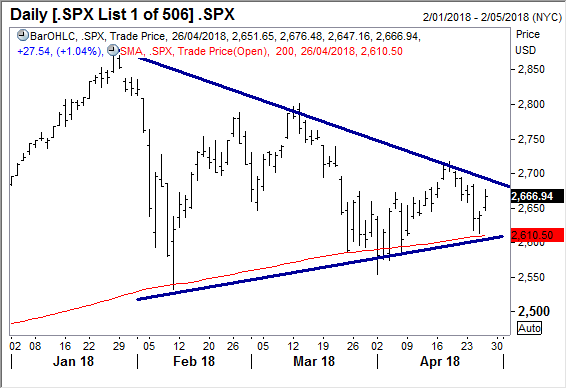 Spain-listed Bankia and Caixabank were mixed in trading with returns of +0.5% and -0.9% respectively. Heidelberg Cement ticked up 0.6%.

Amid a sea of red ink, China Unicom eked out a 0.2% gain. Oil and gas major CNOOC closed 0.5% lower, internet giant Tencent Holdings drifted down 1.2% and insurer PICC fell 2.5%. Sunny Optical slumped 7.0% as the company is a supplier to Huawei.

The Macau casino stocks were mixed, with Sands China finishing up 0.6%, while MGM China and Wynn Macau closed 2.3% to 2.5% lower respectively. More on MGM and Sands later.

In Australia the market edged lower on Thursday, with the ASX200 ending the session down 10 points at 5,910. The banking sector was lower with an action-packed day at the Royal Commission hearings, with Westpac faring the worst, down 3.6%, and also suffering from a broker downgrade. Amongst the miners, South32 recovered 2.2% from recent weakness. There was also some M&A activity, with opportunistic bids for Healthscope and Tegel, New Zealand’s biggest chicken producer. A strong performance by Wall Street sets up for a positive session today, with the SPI futures pointing towards a 46-point gain on the open.

Baidu released results after the bell, and smashed profit expectations. The Chinese internet giant posted came in with first quarter net income of 6.7 billion yuan versus expectations of 2.8 billion yuan. This was achieved on sales of 20.9 billion yuan. China’s answer to Google is seeing advertisers flock to its news aggregation service, while a Netflix-like video service is drawing in subscribers. China’s most popular search engine expects second quarter revenues of 24.91 billion yuan to 26.19 billion yuan, again well ahead of analyst expectations. 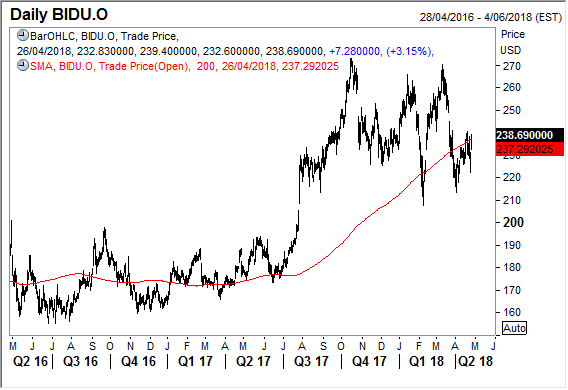 Japanese industrial robot manufacturer, Fanuc Corp released their financial results for the year ended in March 2018. Sales for the fourth quarter were 190 billion yen, an increase of 30% year-on-year, operating profit increased 45% to 60 billion yen. For the quarter the company’s operating profit margin was 31.7% and earnings per share 235 yen.

The company said that they expected to see a decrease of 34% in annual operating profit for the next financial year and sales to drop by 12.7% to 634.2 billion yen. The main reason for the bleaker forecast is due to the slowdown in investment technology and trade frictions the company added.

“IT-related spending that was active in the 2017 fiscal year is expected to slow down,” a representative of the company said. “Also, uncertain factors including trade friction issues between countries and their impact, and the outlook for currencies, mean the situation will likely be unpredictable,” he added.

Fanuc posted an operating profit of 229.6 billion yen for the fiscal year ended in March, an increase of 50% on strong spending by tech companies. 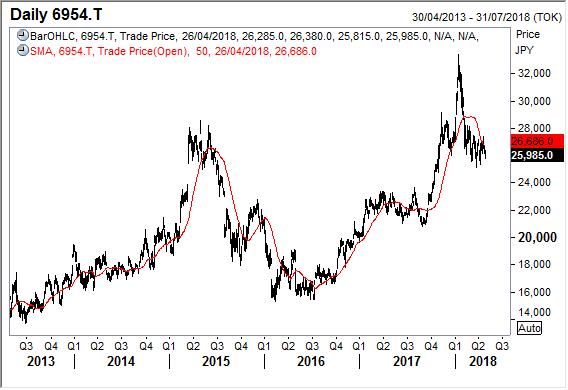 Casino operator Sands China reported net income of US$557 million, an increase of 59% from a year earlier for the first quarter of 2018. Total revenues increased by 17% to US$2.16 billion for the period. The results were released by its controlling shareholder Las Vegas Sands (LVS) who owns roughly 70% of the equity in Sands China.

LVS said its Macau operations generated adjusted EBITDA of US$789 million – an increase of 26% compared to the same period last year. LVS continues to invest in Macau with capital expenditures towards construction, maintenance and development amounting to US$125 million for the region.

Sands China is reaping the rewards from a younger clientele – tourists with families from beyond the Guangdong province. The families are spending more on non-gambling activities including shows and retail shopping, which amount to over 25% of Sands China’s EBITDA. Further, the company’s VIP revenue increased by 29% resulting in a gain in the VIP share market. Sands China ended the trading session up by 0.6%. 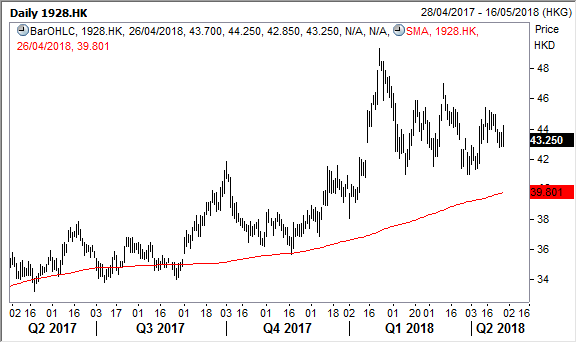 Fell Macau casino operator MGM China also hit the mark with its numbers. The company posted total revenue of Hk$4.7 billion in 1Q18, marking a 26% increase from a year earlier, buoyed by an initial contribution from the opening of its new property MGM Cotai. It opened halfway through the quarter and chipped in HK$665.7 million of revenues.

MGM saw its casino win increase by roughly 24% year-on-year in 1Q18, outperforming the broader market, which saw casino win up approximately 21%. There was relative outperformance in some other key metrics as well, with main floor table games win up 20% year-on-year compared to an 18% increase for the broader Macau market. MGM’s VIP table win increased 26% versus an estimated 22% increase for VIP gross gaming revenue in the region during the quarter.

MGM Cotai opened its doors on 13 February and management reported this boosted new customer interest and saw a reinvigoration of interest from old ‘lapsed’ customers. There has been minimal cannibalization at MGM Macau to date, as the company increased the number of non-gaming facilities at the older property.

MGM China EBITDA edged up 4% to HK$1.3 billion, with only a small HK$64.8 million EBITDA contribution from the new property. The EBITDA margin from the new property will increase from initial low levels as it settles in and becomes established. MGM China is held in the Global Contrarian Fund where we are overweight the Macau casino operators due to robust long-term growth prospects. The shares were off 2.3% but have had a strong run in recent years. 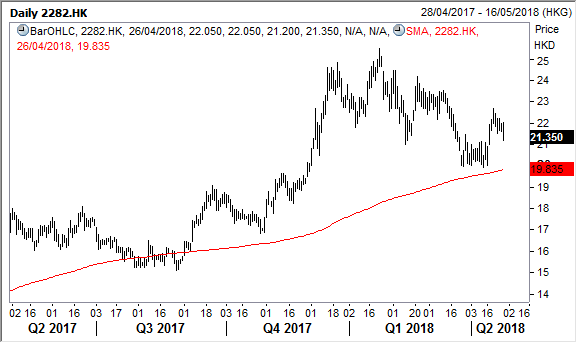