Major indexes on Wall Street traded in a sideways range Friday and finished little changed despite continued generally strong corporate earnings and a minor slide in Treasury yields from four-year highs earlier in the week. The S&P 500 edged up 0.11%, the tech-heavy Nasdaq was effectively flat (+0.02%) and the Dow edged 0.05% lower. For the week the S&P 500 was little changed, the Nasdaq was down 0.4% and the Dow closed about 0.6% lower.

To date over half of the S&P 500 have reported, and 79% of those have beat expectations. So far so good… and I remain of the view that the strong earnings season will prove the trump card as far as markets are concerned. CEOs are also very upbeat about the outlook (the most in decades) which also in my view means that earnings are unlikely to have ‘peaked.’

Amazon shares gained 3.6% on Friday as its profits surprised on the upside, more than doubling from a year earlier to $1.6 billion, even as the company continued to invest heavily for growth. Its cloud computing business, along with a fast-growing contribution from ads were key drivers. The company announced its Amazon Prime subscription fee will increase $20 to $119 per year.

Charter Communications shares tumbled 11.7% after first quarter earnings disappointed and it lost more TV subscribers than expected. That sparked a sell-off across the sector. Comcast fell 4.6% after reporting modest video subscriber losses earlier in the week and as investors worry about the company being tempted to overpay or overextend itself by adding 21st Century Fox to its buy list. Comcast recently lobbed an offer at Sky, trying to ruin Disney’s party.

The megabanks Mizuho, Mitsubishi UFJ and Sumitomo were down 0.3% to 1.9% on the back of the BOJ’s update. Air conditioning giant Daikin Industries advanced 1.2%, while energy firm Inpex tacked on 0.6%. Trading house Mitsubishi Corp edged up 0.3% and Nippon Telegraph and Telephone (NTT) eked out a 0.2% gain.

In Hong Kong, Sunny Optical shares rose 3.4%, recouping some ground lost earlier in the week. Telecommunications firm China Unicom advanced 2.6% gain and oil and gas major CNOOC gained 2.8%. internet giant Tencent Holdings closed 1.6% higher, while the insurers PICC and Ping An were mixed, with a gain of 2.9% and fall of 2.2% respectively. The Macau casino stocks Sands China, MGM China and Wynn Macau gained between 1.6% to 2.6% on the day. 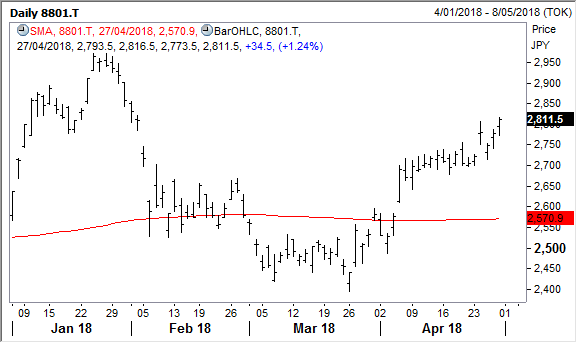 US-listed shares of Baidu surged 5.6% in trading on Friday, with it the first day for trading following the release of numbers that blew past analyst expectations after the closing bell on Thursday. The company’s outlook was also positive with revenue forecasts well above what Wall Street was anticipating. The core advertising business has its mojo back and heavy investment in areas like artificial intelligence (AI) and autonomous driving to establish new revenue streams for the future and progress has been promising.

Baidu said in its earnings release that it is planning on selling a majority stake in its financial services business. Baidu’s video streaming business, iQiyi, recently undertook an IPO on the New York Stock Exchange, raising almost $2.3 billion. Unlike its plans for the financial business, Baidu has retained a majority stake in iQiyi, a business that has been referred to as the Netlix of China. iQiyo revenues surged more than 50% year-on-year in the first quarter of 2018.

Baidu benefitted from a substantial increase in net other income, which jumped from a marginal amount a year earlier to RMB 1.86 billion in the first quarter of 2018. The increase was driven by a change in accounting treatment, which saw Baidu (and other companies) value investments in private companies at fair value. 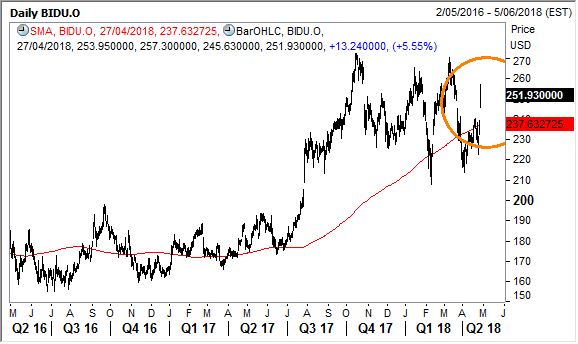 German automaker, Volkswagen announced that their first quarter gross revenues increased 4% to 58.2 billion euros (US$70.8 billion) after they had record sales for the quarter. It was a strong start for the company taking the recent corporate restructuring and the ongoing “dieselgate” sage into account.

The company’s operating profit did decrease by 4.2 billion euros, but this was mainly due to the changes Volkswagen had in accounting standards – under previous practices the operating profit for the quarter would have been higher too. Net income for the three months came in slightly lower at 3.3 billion euros versus the 3.4 billion euros of the same period last year.

Herbert Diess, the newly appointed CEO highlighted that the outlook for Volkswagen’s earnings remained firm. The company is looking to generate revenue growth of 5% for the 2018 year. Recently Volkswagen underwent the biggest structural reform in the company’s history after a reshuffle of its executive management to support more nimble decision making.

The strong numbers by Volkswagen once again pushed away concerns that the carmakers participation in the ongoing “dieselgate” scandal could weigh on the company’s financial performance. 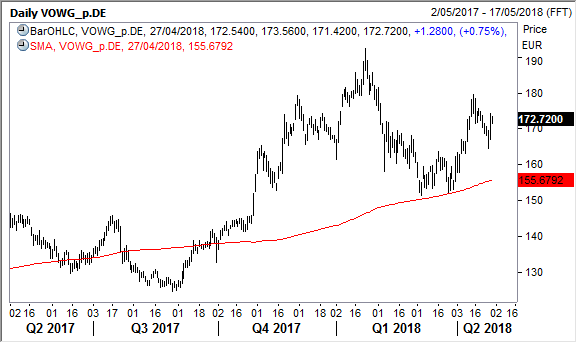 Japanese entertainment and electronics company Sony Corp, released their first quarter results on Friday with the company making a loss in the January to March period – due to lower mobile operations and unfavourable currency rates. Sony reported a loss of 16.8 billion yen (US$154 million) for the first quarter, a reversal from the 27.7 billion yen profit the company achieved for the same period a year ago.

“We’ll work to maintain high profit levels so that we don’t make the last financial year’s record profit a one-time event,” CFO Hiroki Totoki said. “Growth in imaging sensor demand will slow in the near term as the smartphone market matures, but in the medium and long term, we expect further growth as applications for the image sensors expand to other means of sensing, as well as to surveillance, factory automation and automobiles.”

Sony expects gaming profit to increase 7% as sales of high-margin online software compensates for slowing sales of console devices. Games consoles are normally upgraded every 5 – 7 years and one of new CEO Kenichiro Yoshida’s priorities will be the development of the PS4 successor.