After swooning on Tuesday after Dow constituent Caterpillar warned of peak earnings (after beating the Street’s estimates) the US indices recovered on Wednesday to finish in the green. Boeing and Facebook triggered the recovery on Wednesday after not only significantly beating consensus forecasts, but providing an upbeat assessment of future earnings. Meanwhile the reporting season continues to roll on and deliver a quality array of results.

Major indexes on Wall Street closed higher on Wednesday, stabilising after sharper losses on Tuesday, when rising Treasury yields sparked a sell-off in equities. The stabilisation was welcome, as the yield on the 10-year note again breached the psychologically important 3.0% level, as it did in intraday trading on Tuesday. Equities rallied into the close, with the Dow and S&P500 closing slightly higher. The tech-heavy Nasdaq closed virtually flat finishing the day 0.05% lower, while the S&P500 gained 0.18% and the Dow closed 0.25% higher.

I think the US markets were shaken on Tuesday, despite the all the “good news”, after fund managers and investors have had to deal with the most volatile and choppy trading conditions in ten years. This has led many to question the duration of the current cycle and just how much time is left before the next down turn.

Optimism is being balanced (and cancelled out) by rising pessimism. So what conclusions does this “dichotomy of opinion” provide? I think firstly assessing the Dow technically, the index has gone through a sharp and volatile multi-month correction, but where the 200-day moving average has been respected and where volatility has dissipated. This has coincided with a series of higher reactionary lows – but also lower highs in what is a converging triangle formation. These patterns are typically resolved definitively to the upside or to the downside.

One way or another we are all soon to find out whether the bull cycle that began in 2009 will continue or not as the market reveals its cards. Will it be the “ace of spades, the two of clubs or the joker?” 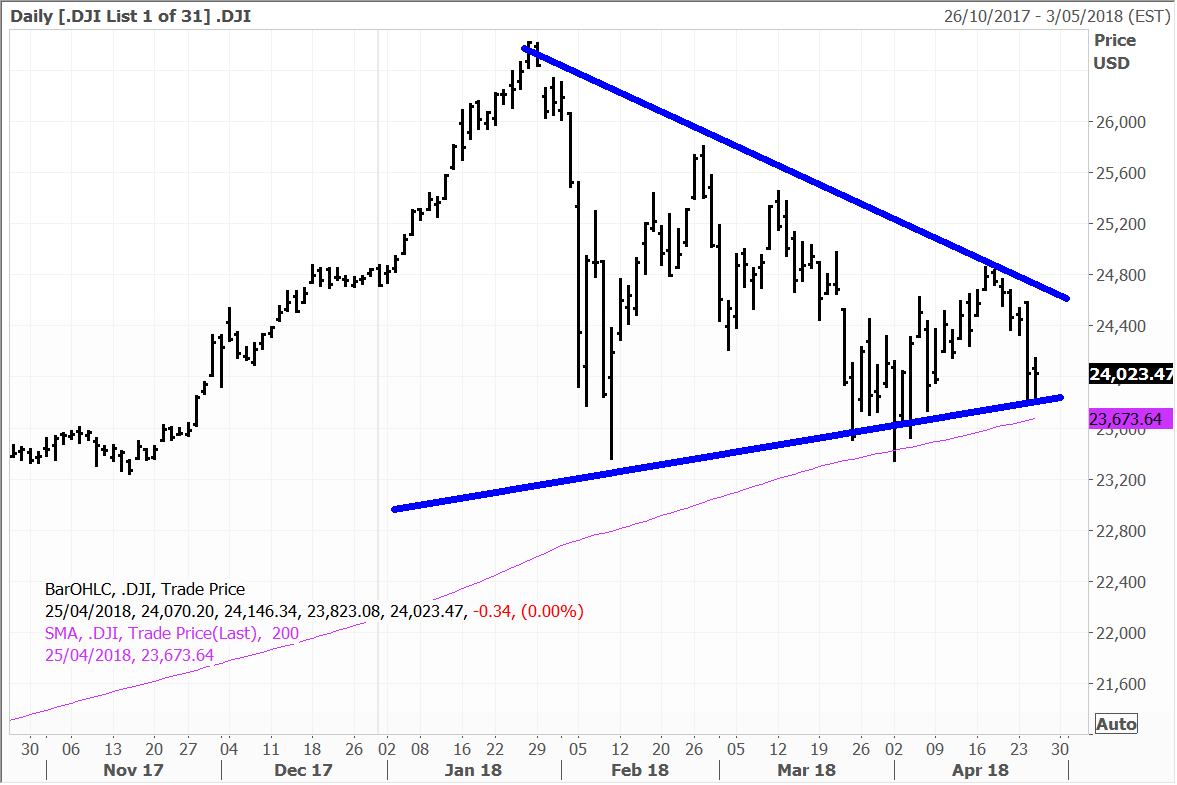 I’m going for the ace of spades because I see the current pattern resolving itself to the upside as the market reflects and rationalises what has been a very solid earnings season. Yes, there is plenty to worry about, and I’m not dismissing the fact that the markets have also had to contend with rising interest rates with the US 10-year bond yield surging past 3% in recent days, but we have known that the cost of money has to rise for some time.

On the other hand, the reporting season has produced some great results. Bloomberg put out a report that CEOs have seldom been as upbeat on corporate outlooks in decades. For now, the earnings season has to trump everything else and therefore I see the Dow resolving itself to the upside and cautiously resuming a ‘tedious climb’ up the wall of off worry. The second half of the year could be a different story – as it should be however.

The 10 Year sailed past 3% on Wednesday yet the US indices managed to close in positive territory.  We increased our short position on US 10-Year T Bonds last month in the Global Contrarian Fund. 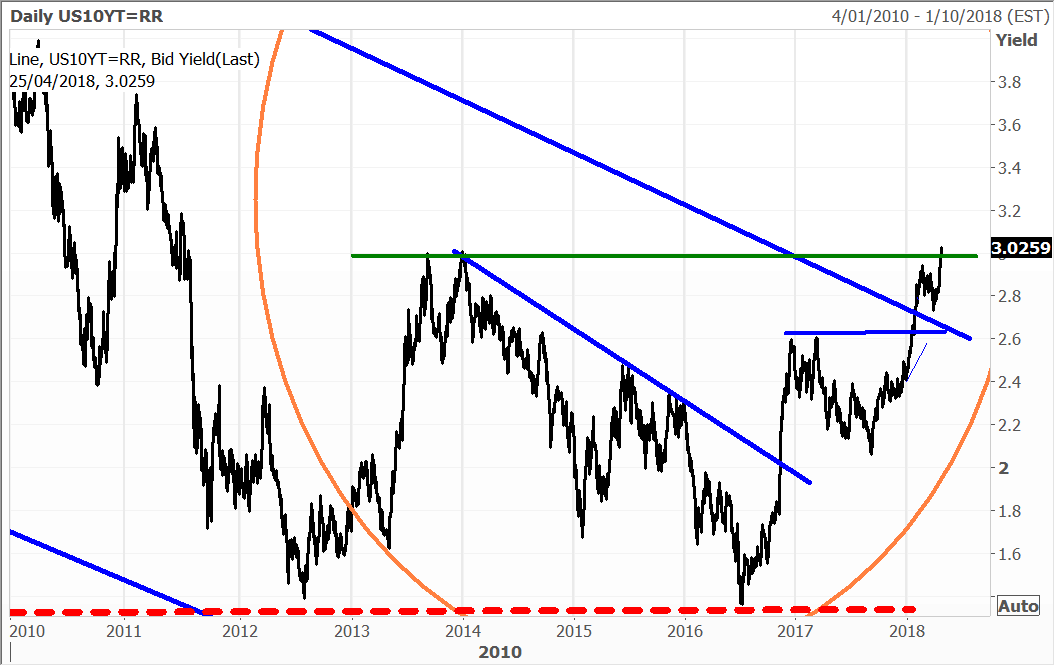 Comcast shares gained 2.7% after the company made a firm bid for London-listed pay-TV company, Sky PLC. That puts it head-to-head with Disney and Fox, creating an interesting battle for a business Disney CEO Bob Iger called a “crown jewel” when discussing the pending acquisition of a raft of 21st Century Fox assets. More on the bid in the UK section. Disney and Fox shares advanced 1.5% and 1.8% respectively.

Amid corporate movers, Credit Suisse had a strong day, rallying 3.6% on its strongest quarterly profit in three years, with its wealth management unit a major contributor. That wasn’t enough to support most other banks across the continent though, with the likes of BNP Paribas, Société Générale and Credit Agricole drifting off by 0.1% to 0.9%. In Spain Caixabank and Bankia were down 0.3% and 1.3% respectively. Also in Swiss trading, but going the other way from Credit Suisse, was chemicals company Clarient, tumbling 7.4% after investors came away disappointed with first quarter numbers.

Disney (which is acquiring most of Fox’s assets including its Sky stake) and Fox will now have to decide how much they are prepared to pay for Sky to foil Comcast. Sky has been called a “crown jewel” by Disney CEO Bob Iger. Watch this space.

Technology stocks were laggards across the greater China region. In Hong Kong, China Unicom gave back some gains (-1.3%) from the day before when it rose on higher first quarter profits, while insurer PICC slipped 1.5%. In the technology area, internet giant Tencent Holdings (more on that to follow) closed 2.5% lower and Sunny Optical fell 3.3%. The Macau casino stocks also fell, with MGM China, Sands China and Wynn Macau closing 0.9% to 3.9% lower. This follows strong gains over the past year for the group. Wynn Macau fell after first quarter earnings were somewhat shy of expectations.

Casino operator, Wynn Macau released its first quarter earnings for the three months ended 31 March 2018. Net profit attributable to shareholders equity increased 119% year-on-year to US$227 million. Operating revenues increase by 27% to US$1,284 million over the same period a year ago. Adjusted property EBITDA was US$421 million for the quarter, an increase of 44% over the same period last year.

Shares of Wynn Macau finished lower by 3.72% as investors locked in profits after the numbers fell somewhat short of market expectations. The slightly lower than expected first quarter earnings was largely affected by a weaker performance in the VIP section from a lower unfavourable VIP win rate.

The company which operates 2 properties, Wynn Palace and Wynn Macau – is committed to the future of Macau and has a US$100 million reinvestment programme for Wynn Macau this year with the goal of upgrading the west casino, replacing 2 external excursion spaces with 2 new restaurants and remodelling the Encore rooms in the Hotel.

Wynn Macau also mentioned that they are considering the possibility of working together with shareholder Galaxy Entertainment to explore international opportunities. Wynn Macau is the biggest holding in the Global Contrarian Fund and is held in the International managed account portfolios. 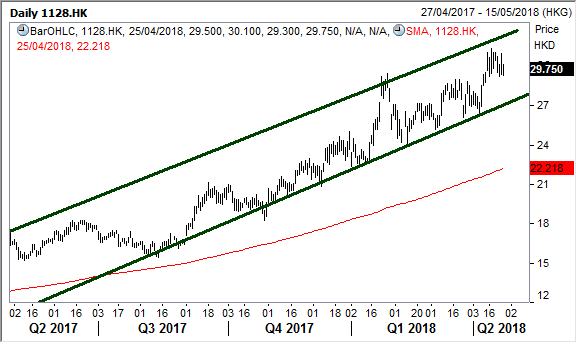 ICICI Bank has announced that it will retain ICICI Home Finance as a wholly-owned subsidiary after the bank dropped the plan to sell the division. Additionally, ICICI Home Finance or Housing Finance Company (HFC) is planning to expand into spaces that the parent bank has not entered. HFC plans to provide clients with self-assessed incomes, access to home loans.

Executive director of ICICI bank, Anup Bagchi said: “ICICI Home Finance was always seen as an extension of the bank. But, now we are moving towards a separate subsidiary. The processes and credit policies were different from those of the bank.”

ICICI Home Finance plans to target clients that were overlooked by the bank. Initially HFC focussed on salary customers like the bank did – Now they plan to target self-assessed income earners which lies mainly in rural areas. HFC will cash in on the large rural customer base of ICICI Bank to reach out to potential clients.

“The skills required, ticket sizes, the markets and the ways of generating value out of the opportunity are all very different (in the case of lending to self-assessed income customers). So, we thought of housing these in the HFC and not in the bank and decided to re-strategize our HFC,” said Bagchi. “Our NIM (net interest margin) would be higher because of the pricing. We also have an advantage — our cost of finance is low because of ICICI parentage.” ICICI Bank is held in the Global Contrarian Fund and is held in the International managed account portfolios.