QBE Insurance though was lower again on Friday, down 3.6% as the market digests what it saw as a very weak result. I think however QBE was more a story of the market being disappointed yet again by another earnings miss. The market’s concern about the underperforming emerging markets division is overplayed in my view, given that it accounts for only around 10% of the revenue pie.

The other divisions performed well and were in line with expectations with premium income tracking higher. QBE Insurance (chart below) is undervalued compared to its peer group, selling on a price to book ratio of just 1, which is around a 30% discount to its peer group. As I noted though, a flat yield curve probably now makes QBE a 2018 story. 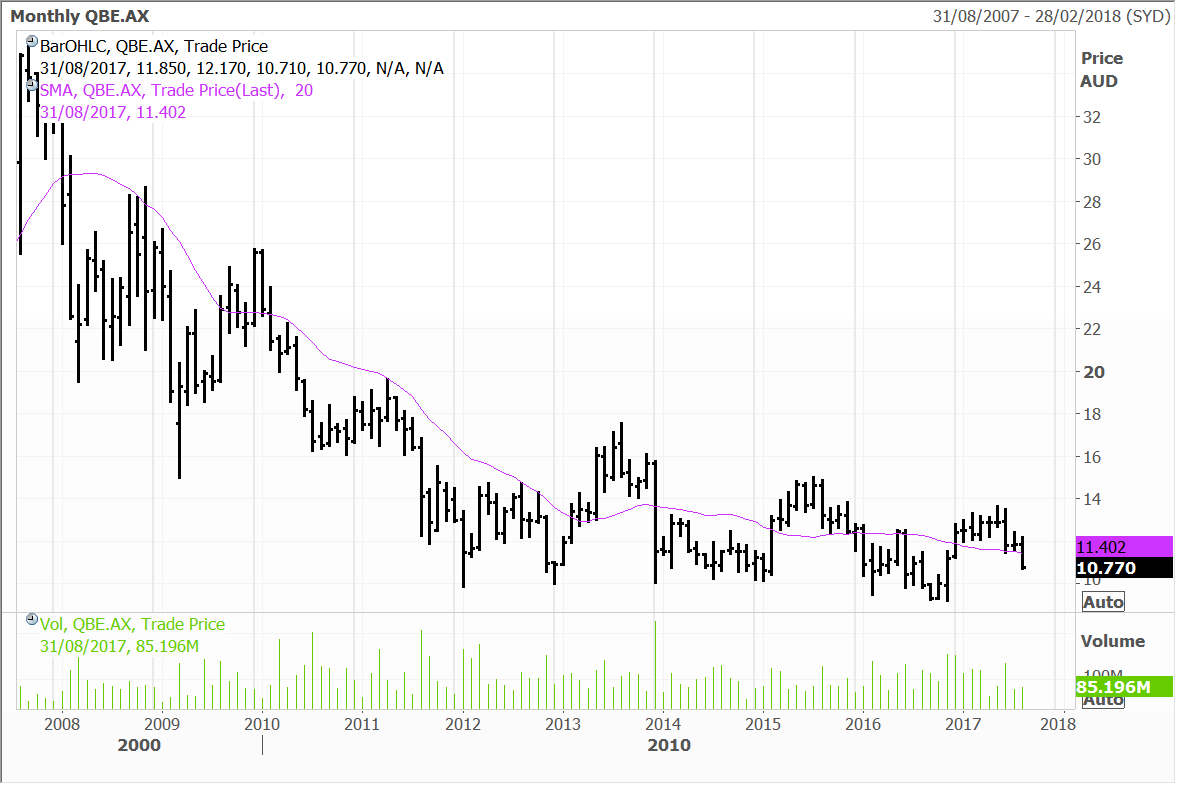 BHP should certainly be one that can step up to the plate tomorrow when it reports, with commodity prices strengthening (average iron ore prices are at 30% higher) over the past year. Expectations are for profits to almost double on the back of strength in iron ore, with underlying earnings of around between US$7 billion and US$7.3 billion respectively.

Questions will be raised once again over the dividend, but this time probably how much it will be lifted. We have already seen Rio quadruple its interim dividend, and there will likely be pressure on BHP to also raise the pay-out. The company has a policy of paying out a minimum of 50% of underlying earnings as dividends, but will likely go further than this.

BHP has done a great job in lowering costs in our view, but oddly, any comments on rationalisation plans will be in focus.  Elliott Advisers has been bearing down on the company’s push into shale, and there have been murmurs that a sale is on the cards. I don’t think that this would be the right course of action now, with energy prices still recovering.

BHP management have admitted that they have made some mistakes in their investment in shale, but two wrongs don’t make a right, and letting go of a key growth asset in what is probably a buyer’s market does not make sense in our view.

I think that energy prices generally can go much higher over the medium term, and this is also a key angle for owning (in addition to iron ore and other base metals) BHP (chart below). I would actually be more positive if the plan was to bolster (or at least maintain) leverage here. We will also be looking for similar noises when Oil Search reports tomorrow. 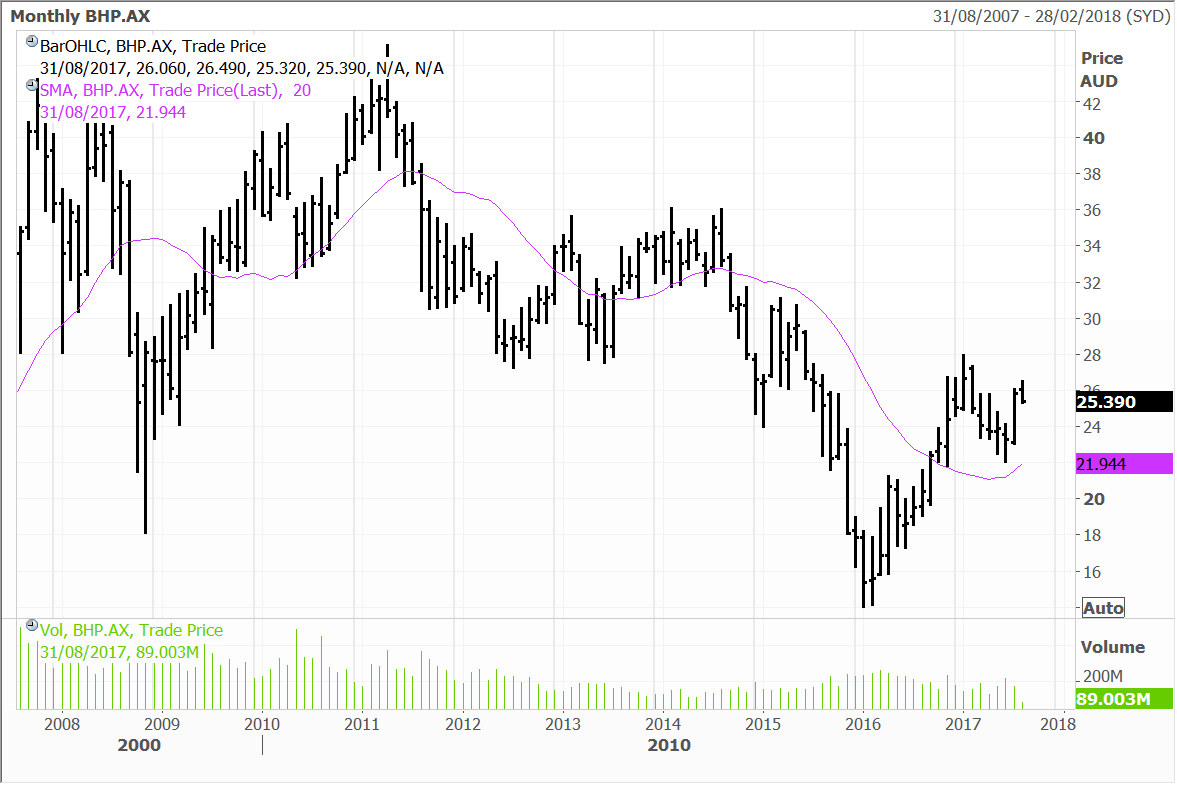 Japan’s biggest banking group by market capitalisation, Mitsubishi UFJ Financial Group’s (MUFG) trust banking unit plans to aggressively build up its presence offshore over the next few years. The unit has around ¥1 trillion (US$9 billion) earmarked to make acquisitions abroad and is seeking to join the ranks of the top 15 biggest asset managers worldwide according to a Bloomberg article and interview with the CEO of Mitsubishi UFJ Trust & Banking Corporation.

Mitsubishi UFJ is a holding in the Fat Prophets Global Contrarian Fund, the Global Opportunities and Asian Managed Account Portfolios.

Bloomberg cited the unit’s CEO Mikio Ikegaya as saying, “We’re going to make acquisitions on a scale we never have before.” The unit is aiming to boost assets under management from about ¥60 trillion currently to ¥100 trillion by as soon as 2020.

As part of a strategy outlined in May this year, MUFG will transfer corporate accounts with ¥12 trillion in loans from Mitsubishi UFJ Trust to its main lending unit next year. By shedding the assets from the trust bank’s balance sheet, it will free up capital for takeovers, with the intention of building a new business model focused on fee-generating businesses such as consulting and asset management.

Mr Ikegaya told Bloomberg he is looking for opportunities to acquire controlling stakes in firms in the United States, Europe and Asia. By type, possible targets range from passive index managers all the way through to highly active managers. 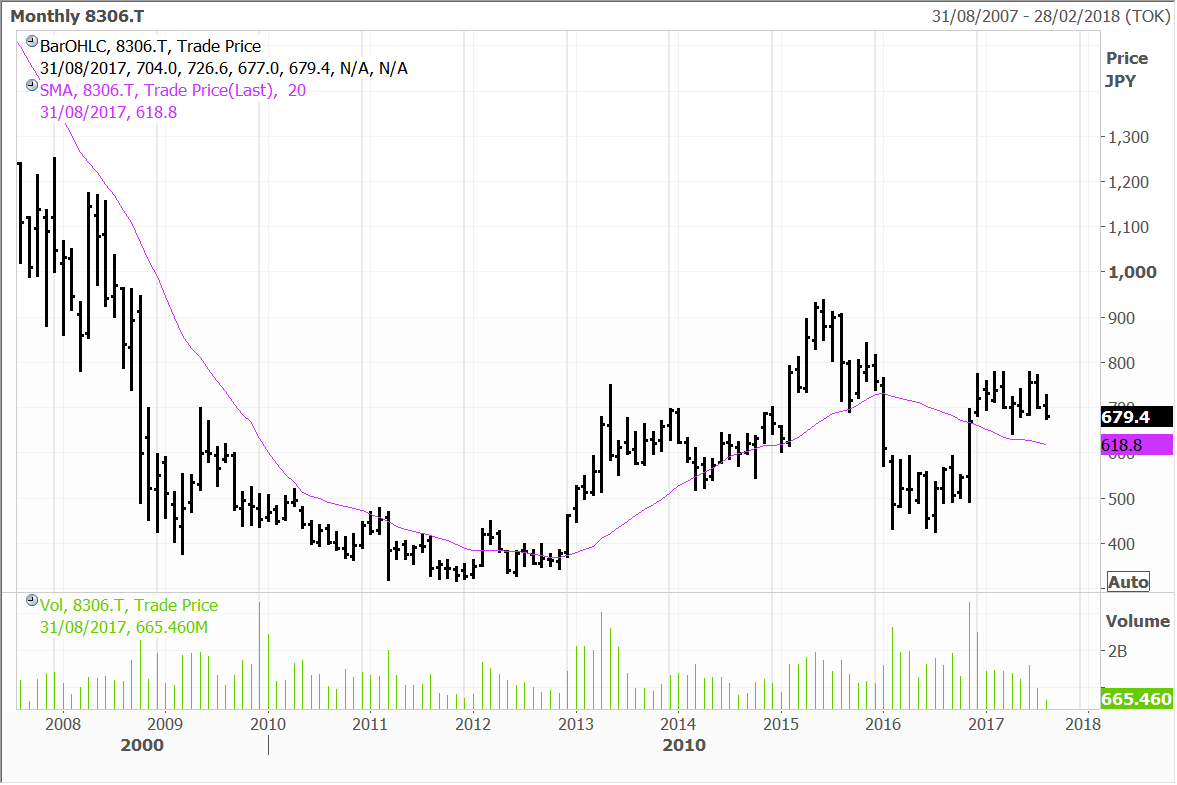 A couple of long-term benefits sought are scale and expertise in managing funds. Scale has become increasingly important in the asset management industry due to pressure on fees and competition from low-cost passive strategies (i.e. many ETFs). Stricter regulation has also meant higher regulatory costs and being able to spread this across a larger asset base is more efficient for asset management firms.

Secondly, the trust arm is hoping to deepen its expertise in fund management to encourage a broader swathe of its customers to shift more deposits into funds. Japanese households are reported to have a whopping ¥1,800 trillion (US$16.2 trillion) in financial assets, but around half is sitting in bank deposits that effectively earn no interest. A sea shift in this thinking would be a tailwind for Japanese equities.

Interest in the asset management space in Japan is growing as the domestic banking operations have faced headwinds from the negative interest rate policy (NIRP) introduced by the Bank of Japan.  There are no Japanese firms among the world’s 15 largest asset managers, headed by Blackrock. However, both Mitsubishi’s trust arm and a competitor, Asset Management One Co., are targeting to join the ranks. Asset Management One was formed by a merger of units of Mizuho Financial Group (also a holding in our Global Opportunities and Asian Managed Account Portfolios) and Dai-Ichi Life Insurance.

Japanese mega-banks have also increasingly looked offshore to bolster profits over the past decade, with MUFG leading the way. MUFG’s overseas subsidiaries (affiliates) in the United States and Asia were major contributors to the almost 57% year-on-year jump in earnings per share in the fiscal first quarter ended 30 June 2017. 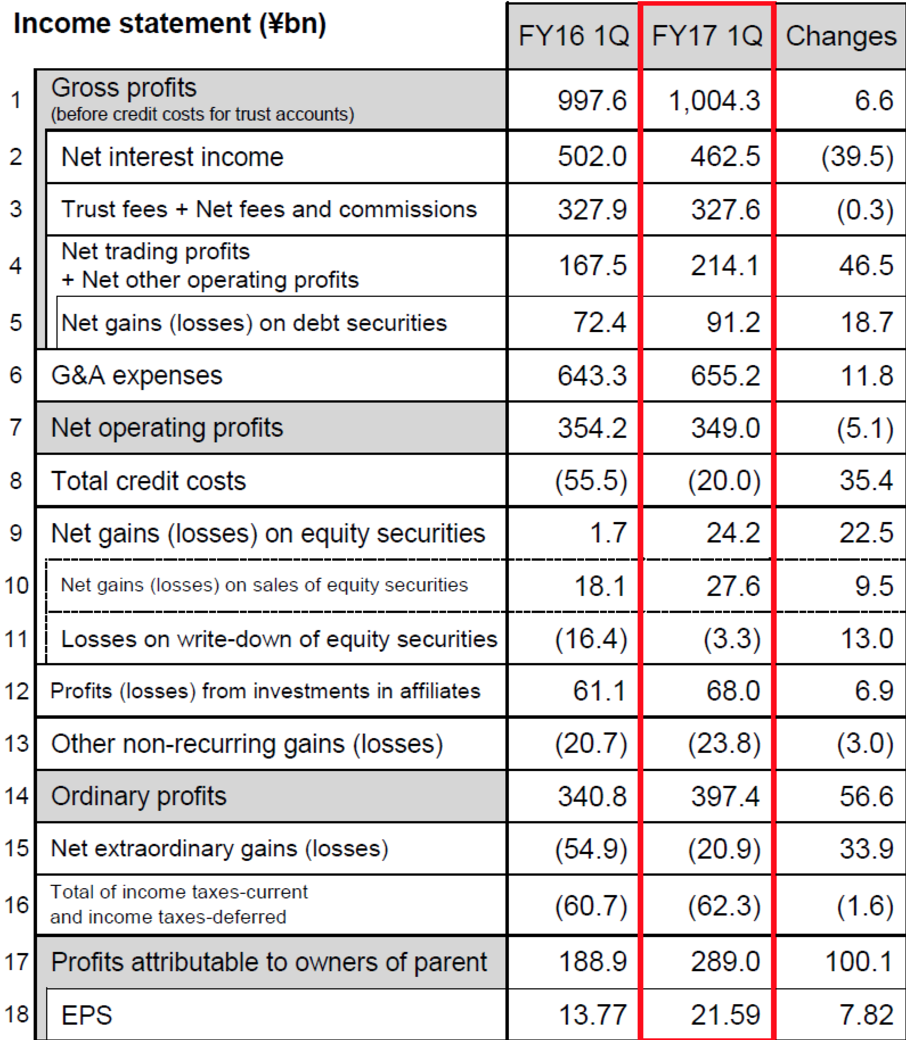 Some of the other factors driving the surge in EPS included higher net gains on equity securities and lower extraordinary losses than in the year ago period. MUFG continues to trade at an undemanding valuation and offers a compelling risk to reward proposition in our view.

The bank has a strong balance sheet and has weathered storms at home well and should our expectation of the eventual removal of negative interest rate policy by the Bank of Japan play out, the stock would likely see a powerful re-rating to the upside. In the meantime, the stock offers a decent dividend yield relative to the local market and has been bolstering its offshore presence, with these becoming significant to the bottom line.