Spain’s IBEX has weathered last week’s terrorist attacks very well giving up little ground. The IBEX lost just 0.25% yesterday. The ongoing police operation in Spain has resulted in the shooting of a man ‘wearing a suicide vest.’  He is reported to be the main suspect on the Barcelona van attack, Younes Abouyaaqoub.

A topside breakout is on the cards for the Spanish stock-market with a resurgence in economic momentum following a lost decade after the GFC. The IBEX (chart below) is still more than 30% below the pre GFC peak. Resistance at 11,000 has contained the index this year, but an upside breakout should coincide with further improvement in the economy.  Bolsas Y Mercados (the Spanish stock exchange which we hold in the Fat Prophets Global Contrarian Fund as well as the Global and European Managed Account portfolios) reported a 4.2% increase in trading volumes for July. 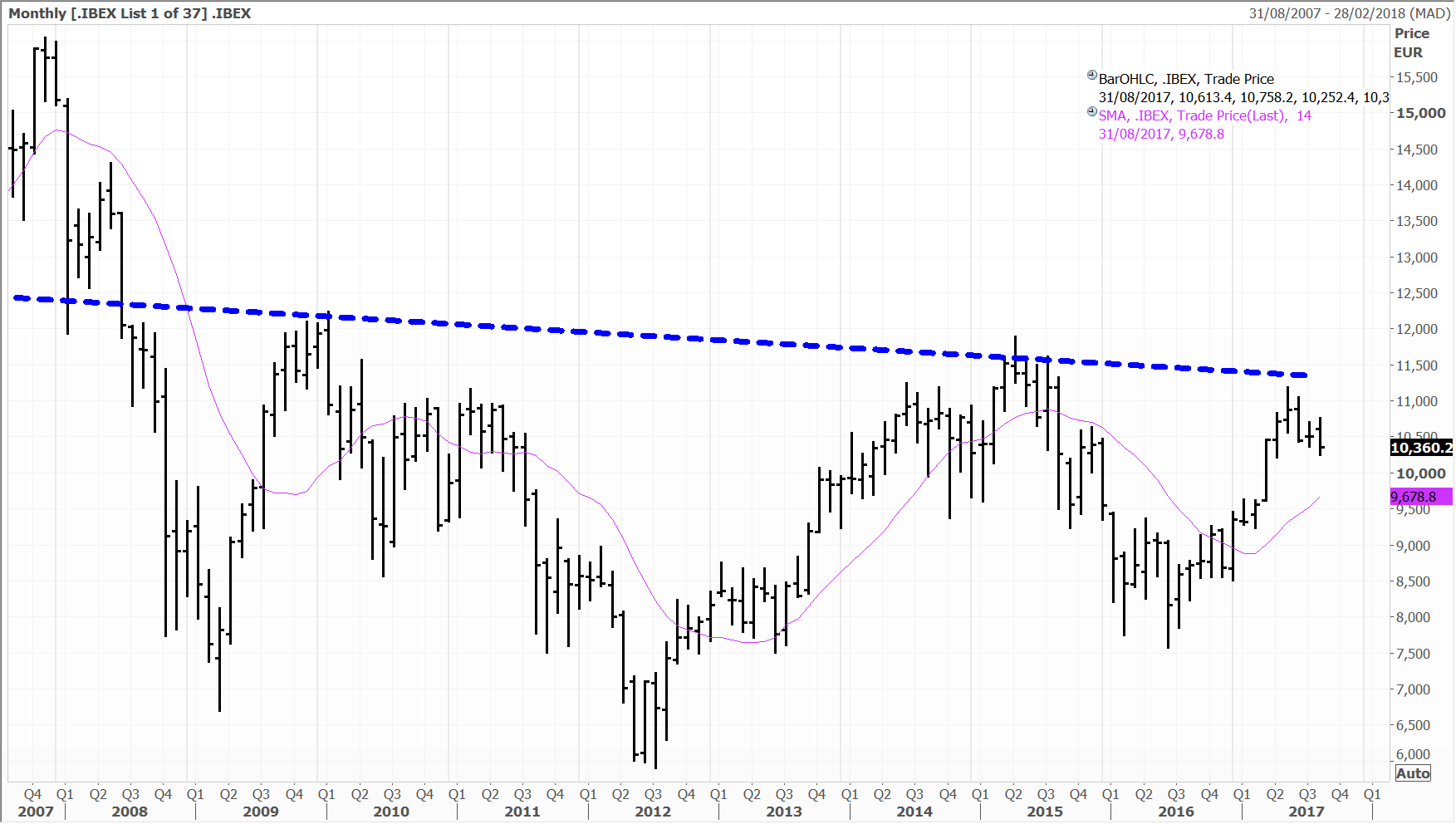 In Australia the market opened the week lower, with another high profile name disappointing with earnings results, and more pertinently the outlook. The ASX200 closed off 21 points at 5725, with Bluescope Steel shares shedding 22%, after full year profit exceeded expectations, but downbeat future guidance weighed heavily on sentiment. So far Australia’s reporting season has generally been lacklustre. Fortescue Metals had a solid result and will increase the dividend. This bodes well for BHP and Oil Search, which both report today.

I have said that the reaction to results announcements should not be about looking through the rear view mirror, and we have certainly seen this over the past week. Similarly with QBE, the company’s core businesses which make up the bulk of revenue are performing well, but

investors have instead focussed on the distracting issues within emerging markets, and a flattening yield curve. We bought some more QBE Insurance on Friday. 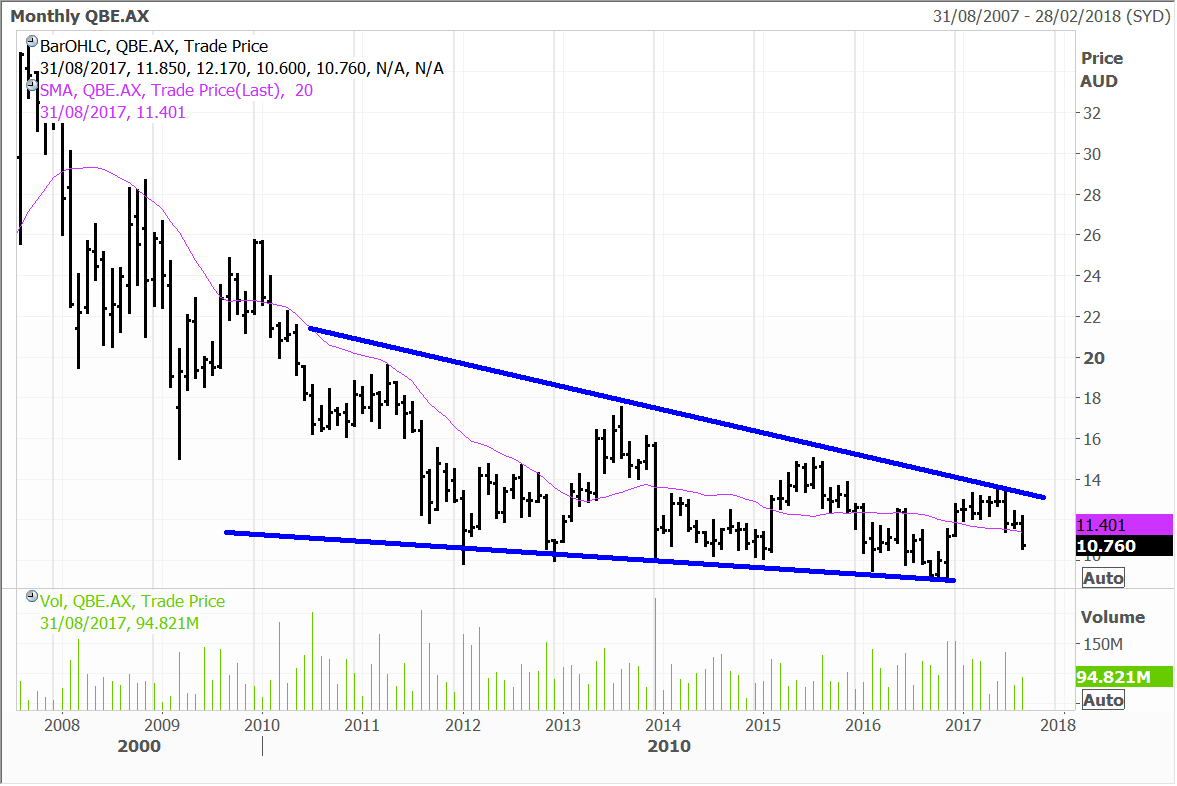 We may have been very wrong in our call on the Telstra dividend, but we did get a sell recommendation right in the mid-tier Telcos such as TPG and Vocus. We exited Vocus around $8 last year, and the shares have since lost 65% of their value. There had been some respite for Vocus shareholders with private equity bidders circling, but Kohlberg Kravis Roberts & Co and Affinity Equity Partners have both ended takeover talks. This saw the shares fall 15% yesterday to $2.75. 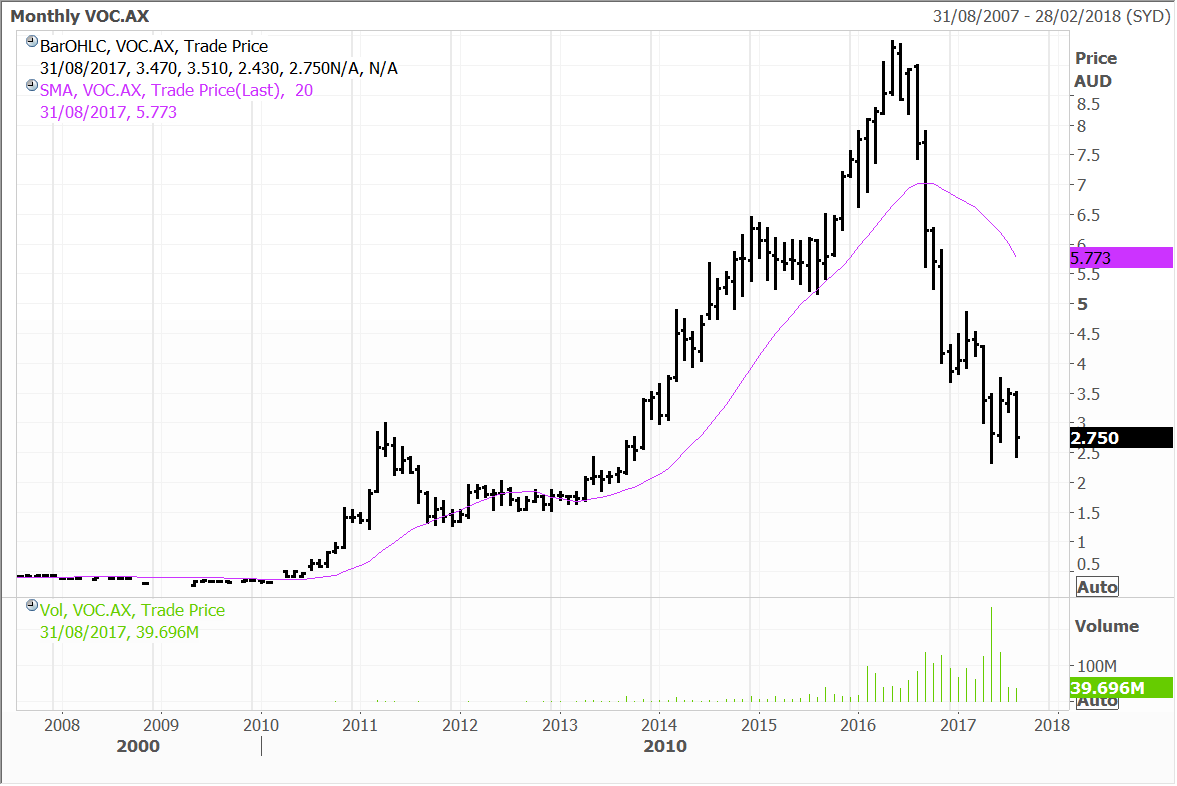 The private equity bidders had put $3.50 per share on the table, and I said at the time that it would be a tough deal to make work. We exited Vocus because we believed the company had bitten off more than it could chew with respect to acquisitions, paying heavily over intrinsic value.

A private equity suitor typically makes a profit through an IPO or break up, and selling off unwanted assets at a premium. In the case of Vocus I would argue that premium in several cases went to the previous vendor and perhaps KKR and Affinity have realised this. Vocus’ decision to last week book more than $1.5 billion in write-downs across its Australasian businesses points to this.

Two private equity bidders abandoning their pursuit at the same time clearly has parallels with Fairfax, but I think the situation is very different. Indeed I think with Fairfax the sum of the parts will prove to be much more compelling than the valuation of the whole, and this will dawn on the market with Domain set to be partially demerged by the end of the year.

Fairfax also has some other great digital properties such as Stan, and the valuation being ascribed to these is being hampered by the scepticism towards the future of the print assets. VSOD though with localised Australian content is not easily replicated on Netflix. Stan how has 28% of the VSOD market. The key to Fairfax will be maintaining current growth rates in the digital businesses, while stripping out further costs from the old media assets. It is evident that the company is performing and executing with this strategy not to mention leveraging digital revenues through a very loyal subscriber base. 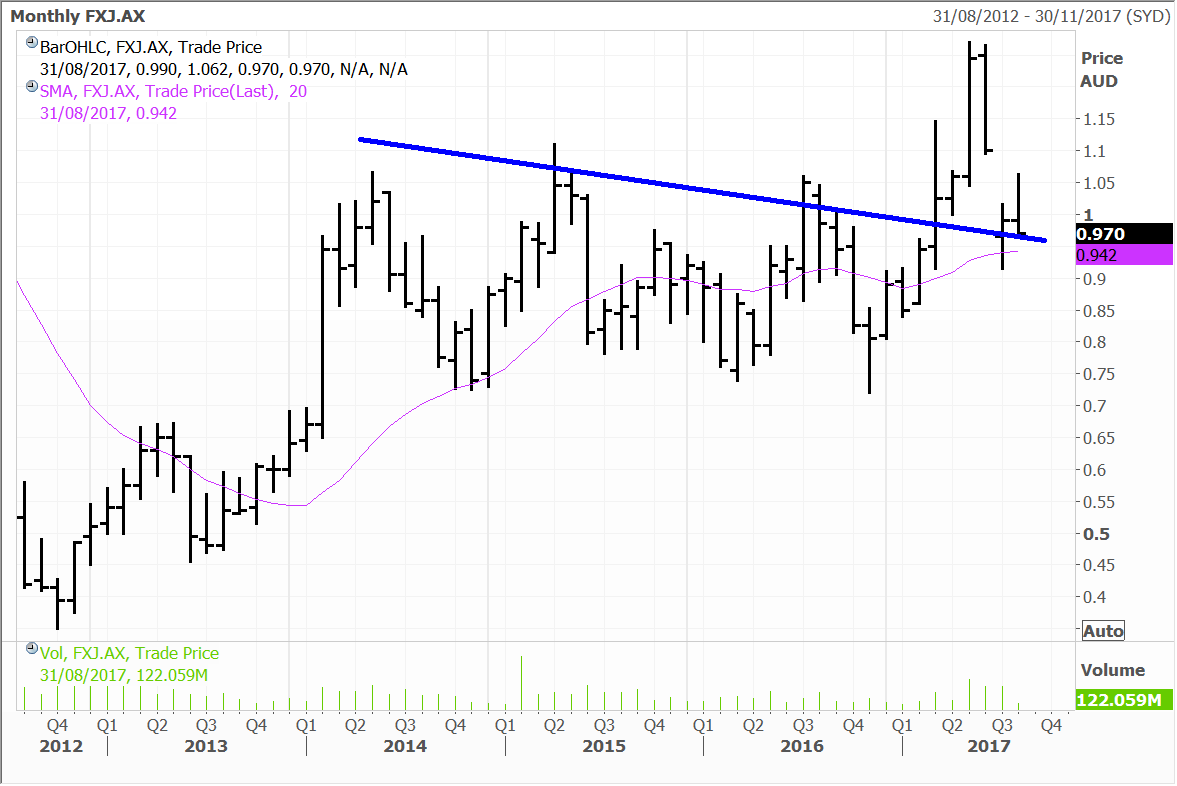 There was a good reaction to the Fortescue (chart below) result with the shares up 6.4%. Strength in iron ore prices has clearly been a feature, and caught many of the bears of guard. We should also see this permeate BHP’s result (which will be out by the time you read this), and I will be looking for a more confident outlook than we have seen with some other blue chips. The dividend payment is set to almost triple, and a 7% rise in iron ore futures overnight is also a nice lead-in. 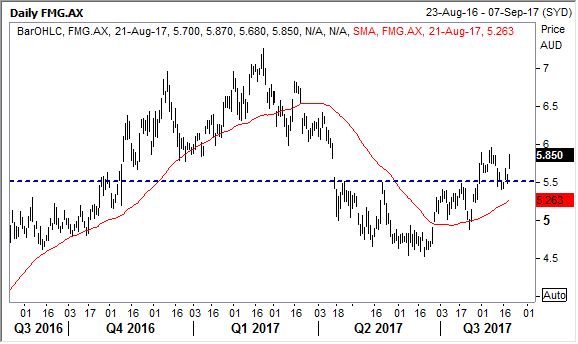