US stocks were flat on Thursday, losing some of the earlier gains in the session as the US Dollar Index continued to lose ground, falling below 89. US Bonds were weaker with yields lifting across the curve, while commodity prices were generally firmer, with oil the standout, lifting 1% after Goldman Sachs revised its price target for this year to north of $82. The yield on the 10-year Treasury note ticked up to 2.75%.

A report from the Institute of Supply Management (ISM) showed that its index of manufacturing activity dipped from 59.7 in December 2017 to 59.1 in January 2018. The market was expecting a print of 58.8, so manufacturing activity slowed less than expected. North of the 50.0 level indicates expansion, while a score below, a contraction, so this was still a strong reading and continued a growth trend that has been in place for 17 straight months.

Of the multiple indicators that comprise the index, there was slowing growth in production, employment and new orders. Meanwhile, new export orders, prices and investors saw the growth rate accelerate.

There was an unexpected drop in the number of Americans filing for unemployment benefits last week which points to ongoing strength in the labor market. The Federal Reserve in this week’s FOMC statement described the labor market as having “continued to strengthen and economic activity as rising at a solid rate.”

The US Dollar Index made new three year lows on Thursday, falling below important support which paves the way for further weakness in the near term. Rising US interest rate differentials with the rest of the world may stem the downward path of the dollar however, with most central banks behind in terms of monetary policy tightening. 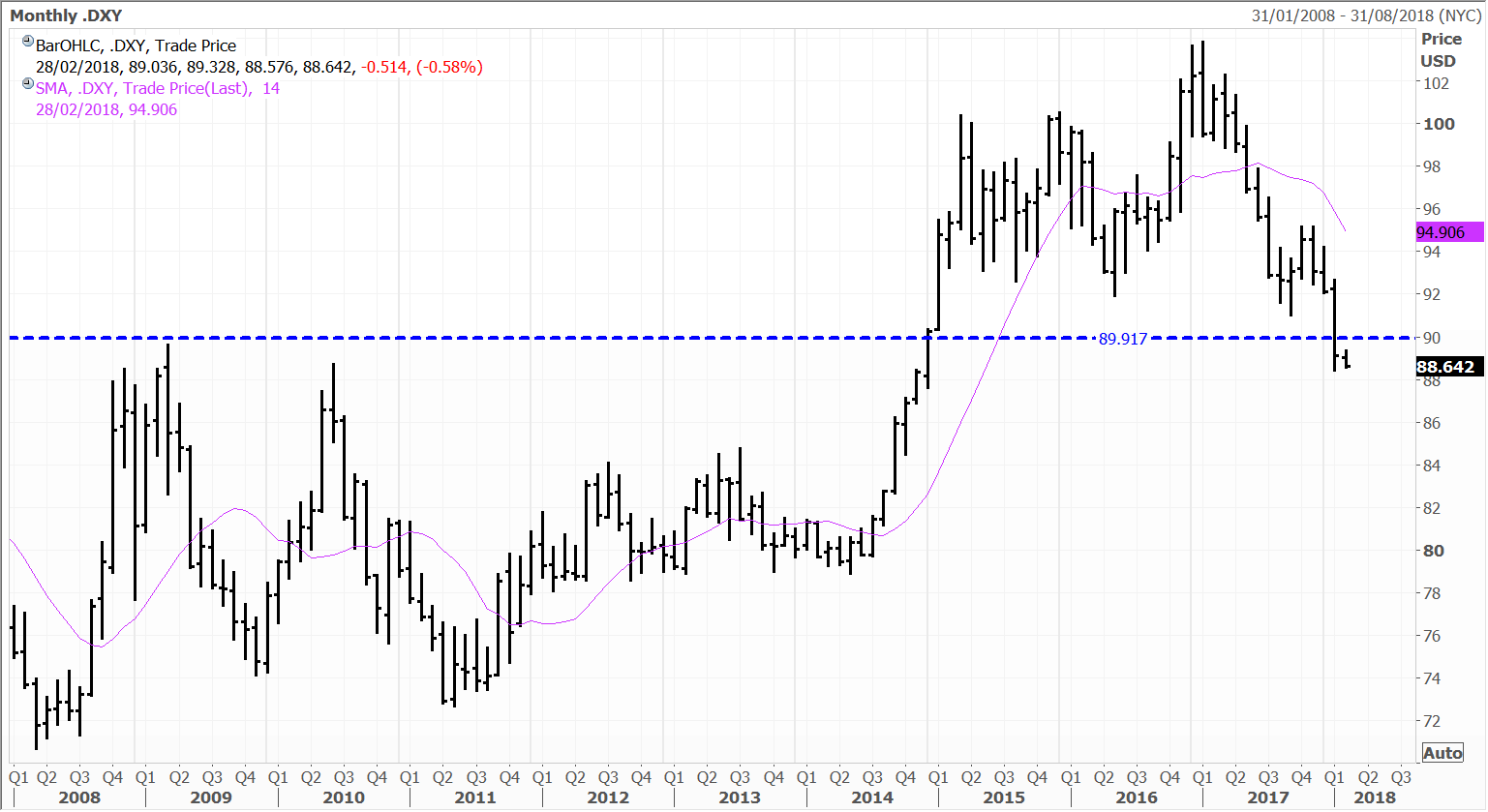 The Labor Department said initial claims for state unemployment benefits slipped 1,000 to a seasonally adjusted 230,000 for the week ended Jan. 27. Reuters conducted a recent poll of Economists which had forecast claims rising to 238,000 in the latest week. So last week marks the 152nd straight week that claims remained below the 300,000 threshold – which is the longest such stretch since 1970. The important January nonfarm payrolls report is due out later today and consensus forecasts are for an increase of 180,000 jobs in January which follows 148,000 in December.

Manufacturers reported an increase in export orders and most offered an upbeat assessment of business conditions – which is to be expected given the weaker dollar, which is making the US much more competitive. It was noteworthy that the ISM survey also showed signs of a pickup in inflation, with a measure of prices paid by factories for raw materials increasing to its highest level since May 2011.

Separately, the Commerce commission reported construction spending hit a record high in December, while another report from the Labor Department indicated an unexpected decrease in US labour productivity in the fourth quarter of 2017, along with higher labour costs. The higher labour costs are no real surprise in a tight employment market, but the modest dip in productivity was.

Technology stocks and banks led the way, ahead of Apple’s quarterly result which is due out after the US market closes. Microsoft and social media giant Facebook rallied after delivering upbeat earnings reports. Facebook was the stronger of the two, up 3.3% after expressing optimism for ad revenues despite some headwinds from lower usage of the network. Microsoft’s cloud computing business put in a strong performance and helped the company beat the Street on the bottom line. eBay shares soared +15% after unveiling a plan to change payment processors.

It is a big day for technology companies reporting, with two Global Opportunities and US Managed Account portfolio constituents, Apple and Alphabet, set to report after the closing bell. Both are enjoying strong business momentum and have delivered robust gains for our portfolios in the past year. Logistics company United Parcel Service was down 6.2% after reporting higher costs that crimped profits in the fourth quarter.

There were many sector winners on the day in Japan, including exporters and energy companies, but the banks were the standouts. The Japanese megabanks shone, with Mitsubishi UFJ and Sumitomo Mitsui both climbing 4.4%, while Mizuho Financial was up 2.2%. We hold an overweight position in the Japanese megabanks in the Global Contrarian Fund, the Global Opportunities and Asian Managed Account portfolios. The banks are under owned, cheap, growing abroad and would benefit massively from the removal of Japan’s negative interest rate policy.

As an exporter Sony got a boost from the weaker yen and benefitted from buyers stepping in after recent weakness. The Japan-listed shares rose 3.4% and the entertainment and technology conglomerate is on track for a record profit in the fiscal year ending March 2018. Sony is also held in the Global Contrarian Fund, the Global Opportunities and Asian Managed Account portfolios.

The market in Australia started February on a positive note with the ASX200 adding 52 points to close at 6090. Gains were posted across the board, with the miners, energy stocks, and financials rising 1% or more. A bump on Wall Street clearly helped, but as I wrote yesterday, the weak inflation numbers have also given the RBA more breathing space on raising interest rates, which also buoyed sentiment.

Investors are also looking ahead to the forthcoming earnings season with some optimism. This is likely justified, particularly in the case of the resource sector, where rising commodity prices, and stable production for the big players are going to be driving bottom line growth. I sense there are going to be some upgrades coming through as a result. This will be dawning on the market (and brokers), and we saw South32, BHP, and Rio rise 1.8%, 1.5%, and 1.1% respectively. We have strong positions in all three diversified miners across the managed account portfolios.

If you can’t beat them, join them.

I expect the other investment banks will also follow suit to varying degrees, and as I have said for some time this is going to see upgrades and something of a scramble of those underweight to get into the resource sector.

We will of course need to be wary that sentiment at some point doesn’t become too exuberant, but I think we are some way off that. Demand/supply fundamentals are supportive as we have been saying, and inflation is going to stoke the market further. When analysts start talking about US$100 as a price target for iron ore or oil it may well be time to take the other side of the fence and at least something off the table.

Talking of taking money off the table, speculation is growing that BHP is looking to speed up the sale of its US shale unit. Management are said to be considering carving up the assets into various packages, while a trade sale of the lot, or an IPO also remain options. The company values the assets at in excess of US$10 billion, although this is still half what the company paid in 2011. This would be a bitter pill to swallow, but of course the old adage about the money being made (or lost) in the buying rings true.

Should energy prices firm further as we expect, BHP may well be able to secure a fuller price, and this would certainly provide significant ammunition for investment in an already robust project pipeline. That said I think management (as well as at other mining companies) will have learnt from the lessons of the past, and may well choose a more conservative path of increasing dividends or returning capital on the back of any newfound liquidity. 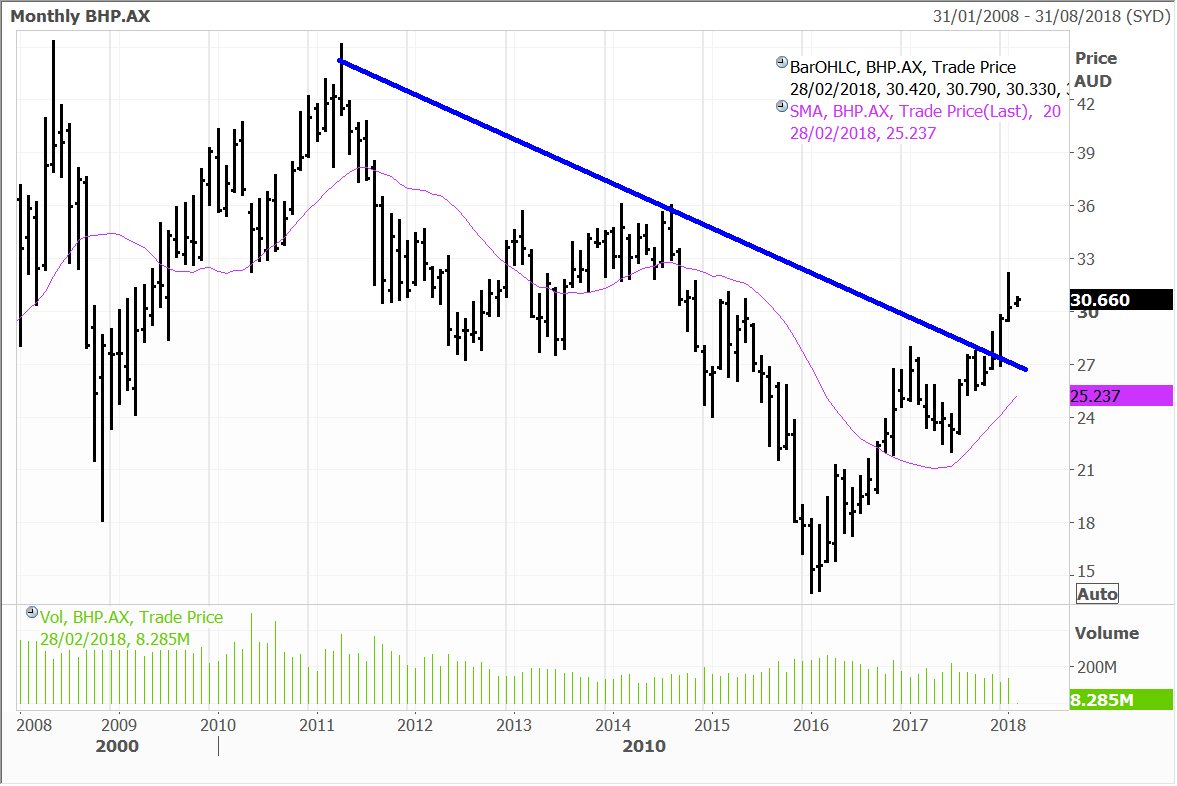 Japan’s Hino Motors soared 9,6% at one stage yesterday after the company raised full year net profit guidance and reported a solid profit result. The truck maker raised its full-year net profit forecast to 52 bln yen ($475.84 mln) from 50 bln yen, due to strong sales in trucks and busses in both domestic and overseas markets. This was well above consensus estimates. The stock broke up out of a trading range which points to further upside. We hold Hino Motors in the Global Contrarian Fund. 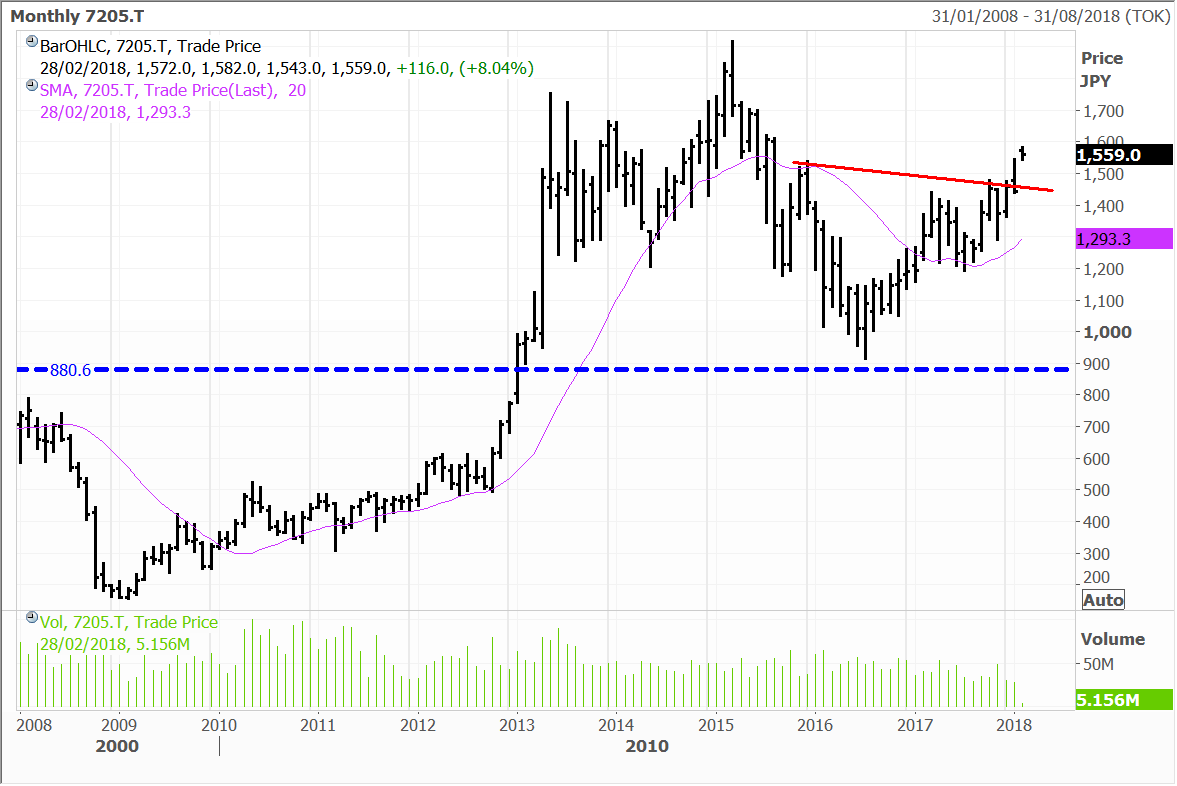 Shares in Japanese banks strengthened on reports of higher profits with Bank of Kyoto, Sumitomo Mitsui, Mizuho Financial and Mitsubishi UFJ up by 6.38%, 4.43%, 2.19% and 4.41% respectively on Thursday’s session. We hold these all these banks amongst others in the Global Contrarian Fund and the Global Opportunities and Asian Managed account portfolios.

Regional lender Bank of Kyoto put on the largest gain at 6.38%. The lender has reported a 12.4% increase in group recurring profit to ¥25.07 billion for the nine months to December 31 but has forecasted 6.5% fall in forecast full year profit. Bank of Kyoto has been a strong performer in the Contrarian Fund and is also held in our Asian and Global Opportunities managed account portfolios. 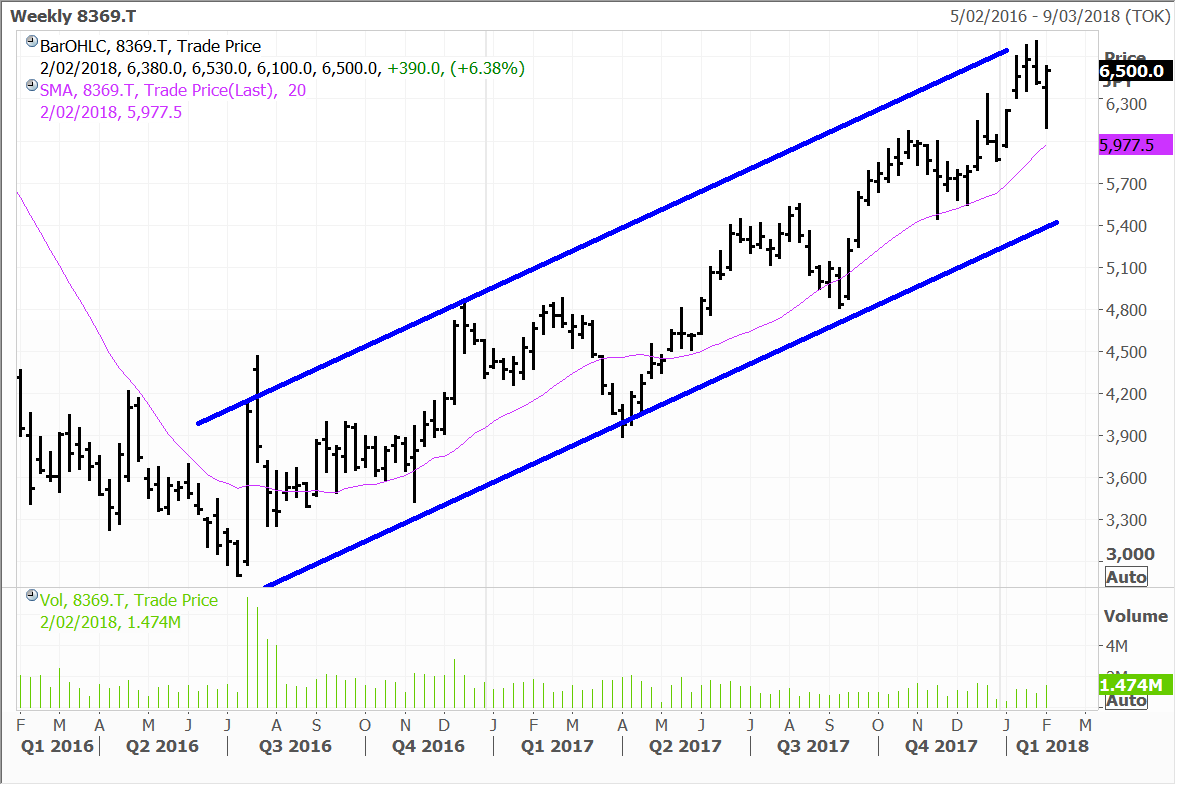 Sumitomo Mitsui and Mizuho both reported higher profits, even as lending income fell, with Mitsubishi UFJ due to report today. The recent rise in US Treasuries has fuelled optimism that margins will improve. The Fed have signalled that optimism in the US economy which will pave the way for interest rate rises in 2018, while the yield on US 10-year treasury yields spiked up to their highest level since 2014 on Wednesday, at 2.75%. 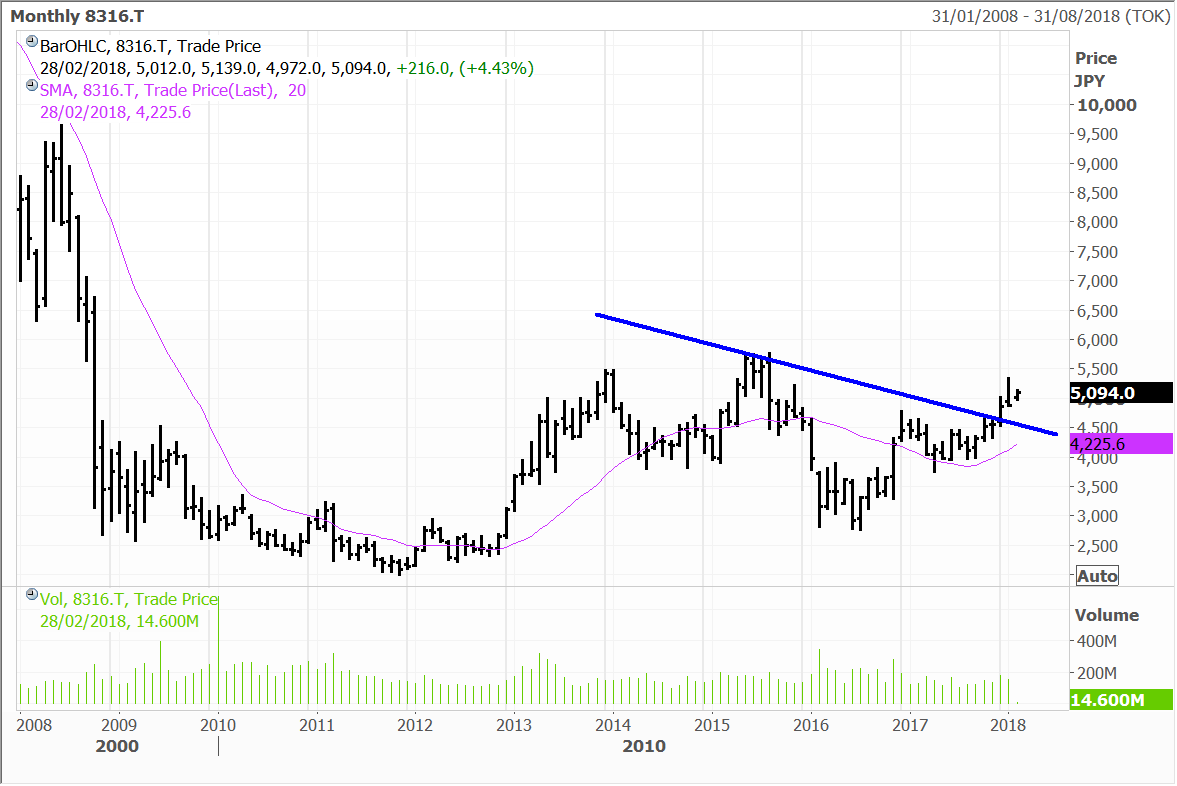 I have been writing in these notes for some time about the value inherent in the Japanese banking sector which has been under pressure following the implementation of the Bank of Japan’s negative interest rate policy (NIRP), forcing lenders to look for other ways to boost income. Valuations are still well below book value and we believe the sector is primed for a re-rating with low unemployment and rising commodity prices underpinning inflationary pressures which could see the BoJ return to a more ‘normal’ monetary policy setting.This recent gain has helped to bump Japan’s Topix to its biggest gain in four weeks. 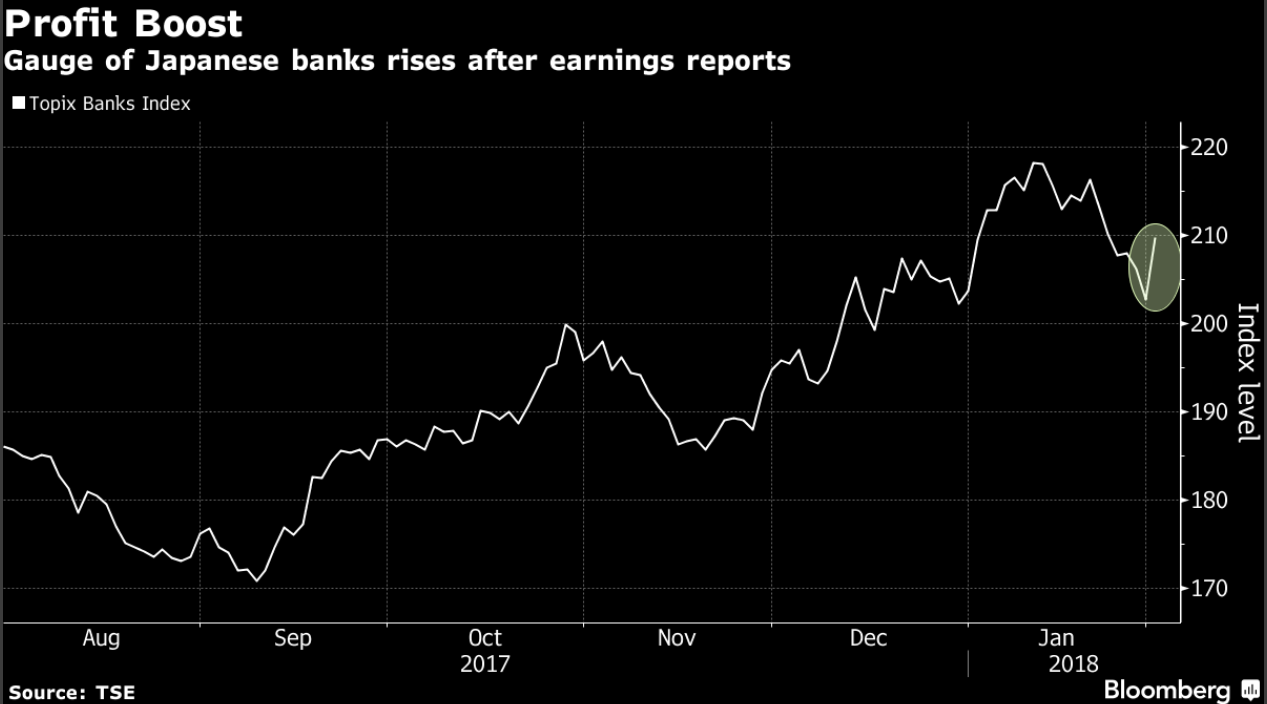