US stocks initially sold down on the open with the futures pointing to losses of 0.6%, however an intraday reversal pushed the indices back up in the afternoon, mitigating overall losses on the day, despite falls in Europe and Asia. The trade spat between China and the US was cited as the catalyst, however there was little in the way of anything new to surface on Monday.

Commodities rebounded with oil leading the way as the market becomes sceptical about the OPEC meeting later this week and just how much production will be raised. All in all, it was a quiet day, with investors looking ahead to the US reporting season which is going to be strong.

The S&P500 recovered intraday most of the lost ground on the open. Key resistance at 2775/2800 remains near term which will likely cap the S&P500 for at least the next few weeks, however the reporting season will likely provide the next significant catalyst for US and global stocks. 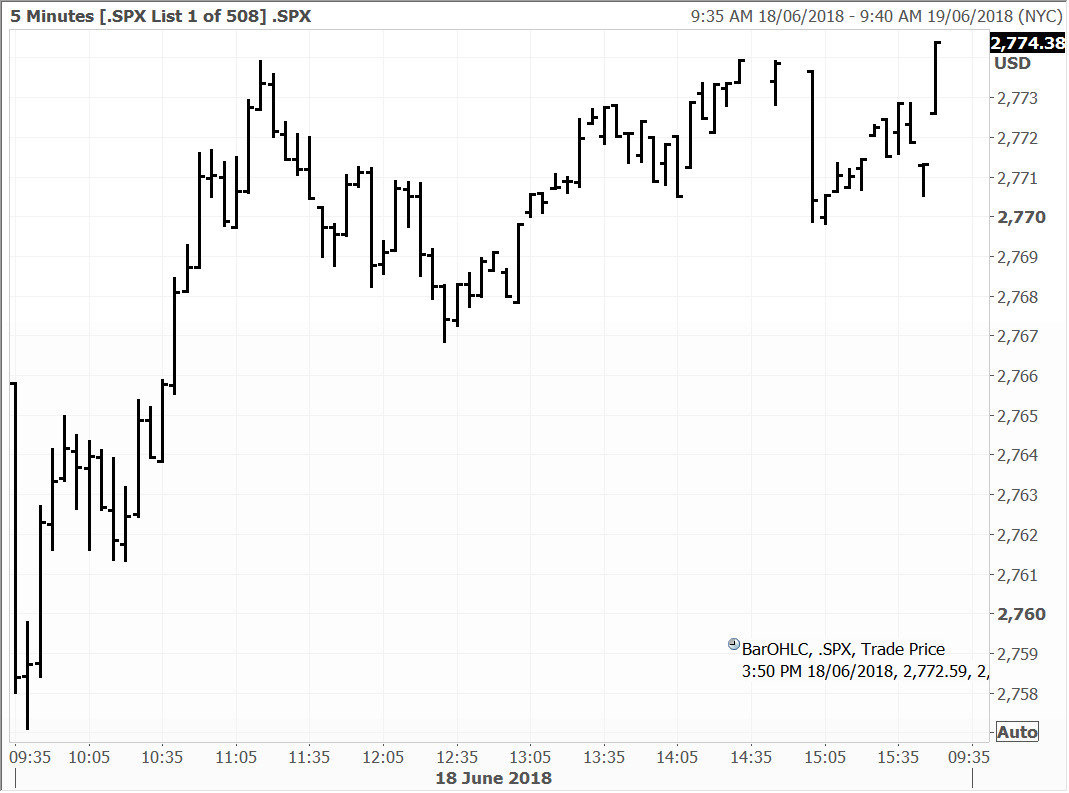 Shares of Comcast and Walt Disney fell 3.8% and 1.6% respectively, with Disney downgraded by a brokerage on concerns of the escalation in the battle for Fox assets. Disney is reportedly putting together another competing bid that contains a cash element as its first offer was all-scrip.

Although there is a point at which a purchase would make little economic sense for Disney, the company may consider going close to that level given the assets on offer are of such high quality and won’t be back on the market anytime soon. The fit with Disney is more compelling than under a Comcast ownership in our view. FOX shareholders are also much more receptive to Disney and may accept a slightly lower offer it were sweetened because of the superior strategic fit.

Elsewhere on the continent, Spain-listed Telepizza and Italy-listed air traffic controller ENAV bucked the trend by advancing 1.2% and 1% respectively. Banks on the Continent were modestly lower, with likes of BNP Paribas, Credit Agricole and Caixabank finishing 0.3% to 0.5% lower.

The big news of the day though was in the resource sector with a couple of M&A deals. Gina Rinehart’s Hancock Prospecting has made a $390 million takeover bid for Atlas Iron. The target operates two iron ore mines in the Pilbara and two undeveloped projects, as well as an interest in a port facility which is under construction and capable of handling 50 million tonnes of exports each year.

Even more significant though was South32’s announcement that it was taking over Toronto listed Arizona Mining, acquiring the 83% of the company it doesn’t own for US$1.3 billion. The target company’s main asset is the Hermosa zinc-lead-silver project located in Santa Cruz Country, Arizona. The company had flagged a construction start date of 2019. CEO Graham Kerr is certainly upbeat about the deal, saying that it will allow South32 to “optimise the design and development of one of the most exciting base metal projects in the industry”.

South32 is paying around C$6.20 a share for its bid, representing a 50% premium to Arizona Mining’s last closing price. The company’s share price has been on the up as permits have been secured to support the first eight years of mining at the site. South32 invested in Arizona in May last year, and has been stake-building since that time. 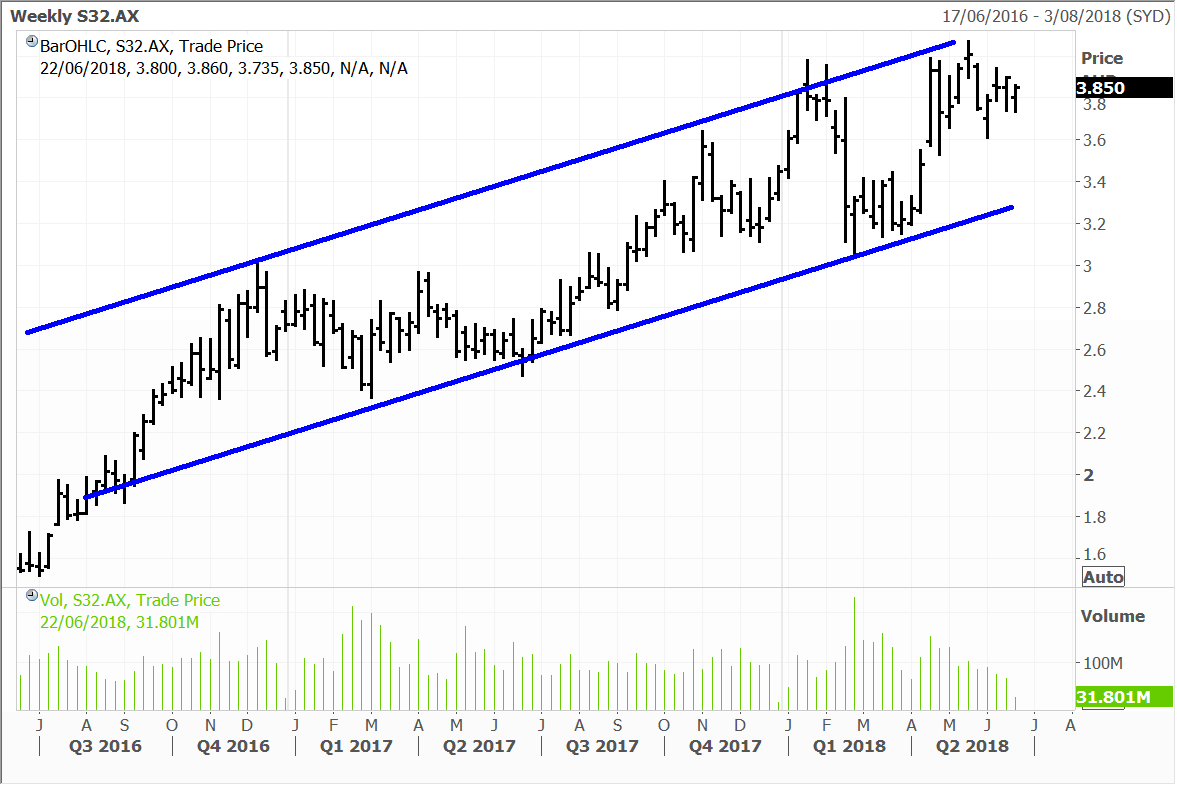 I have talked a lot about the restraint shown by the mining sector versus previous booms, so are we starting to see the tide turn? I don’t think so necessarily, and particularly where we look at the South32 deal.

This is the first meaningful M&A transaction that the company has undertaken since it demerged from BHP three years ago.  However, the company, despite having one of the best balance sheets in the sector, has been very selective deal-making wise. Mr Kerr noted that other opportunities had been canvassed, but that Hermosa deal stood out. In presenting the logic, he said: “I think the industry has very few genuine greenfield opportunities that bring new tonnes to the marketplace…. All of the miners are faced with the challenge of where does growth come from. There’s not that many shovel-ready opportunities out there.”

South32’s CEO went on that Arizona was ‘shovel ready’ and that the company’s ownership of the Cannington mine in North West Queensland would also provide some intellectual synergies. Both projects produce lead, silver and zinc, and have similar mine designs and mine lives. Cannington has been operating for 21 years, with another 10 years left, while the Taylor deposit at Hermosa project is expected to have a 29-year mine life.

South32’s balance sheet can certainly accommodate the deal (and it won’t affect the share buyback program) so I have no concerns on that front. Ratings agency Standard & Poor’s also confirmed that the deal would not see a change to the company’s credit rating. It seems we can’t necessarily rule out further deals, but I also note that management remain very focussed on pricing. Mr Kerr also observed that “If you look at metallurgical coal, if you look at copper assets, I still think that people are paying too much.” As always, price is what you pay, value is what you get.

Clearly the mining sector is looking for ways to generate growth, but I don’t think we are heading back to the heady days of mega-mergers at all. Conditioned by the mistake of the still recent past there has been a “period of restraint” in capital spending by the sector, and I think this will continue.

There remains clear prudence and logic behind recent capex decisions. BHP’s plans to spend $4.8 billion on the South Flank iron ore mine in the Pilbara for instance is focussed on the robust demand for high quality iron ore out of China. Also, it must be remembered that divestment activity (shale in BHP’s case) is also being undertaken on the other side. The mistakes of the boom will not be forgotten in my view.

Volkswagen shares fell 2.75% in Frankfurt trading on Monday as the global CEO of its Audi business, Rupert Stadler, was detained by Munich prosecutors. That office reportedly released a statement reportedly saying, “As part of an investigation into diesel affairs and Audi engines, the Munich prosecutor’s office executed an arrest warrant against Mr Professor Rupert Stadler on June 18, 2018.”

Audi and Volkswagen Group confirmed the arrest and reaffirmed there is a presumption of innocence for Mr Stadler. This comes at a time when New Volkswagen CEO Herbert Diess is in the process of implementing a new corporate and leadership structure, which includes Mr Stadler.

The new group chief Diess is known for pushing through cost-cutting initiatives and intends to accelerate this strategy at the automotive giant. One initiative is to restructure the business into three divisions: volume brands (i.e. Volkswagen, Skoda and Seat); premium (Audi) and super premium (Porsche, Bentley, Lamborghini and Bugatti).

That would help curb some of the costs associated with speeding up its push into the electric vehicles market, as earlier this year Volkswagen management announced a major push into the electric vehicles market over the next five years. Under “Roadmap E” Volkswagen has outlined plans for 16 production sites for electric vehicles (EVs) by the end of 2022. The group currently produces EVs at three locations and in two years’ time another nine plants are scheduled to be equipped for this purpose. To ensure adequate battery capacity, deals have been inked in Europe and China and a similar supplier decision will be made in North America shortly.

When Roadmap E was first announced last fall, Volkswagen announced plans to sell up to three million electric vehicles annually by 2025 and market 80 new electric Group models. This year, another nine new vehicles, three of which will be purely electric-powered, have been added to the Group’s electric portfolio of eight e-cars and plug-in hybrids.

Overall, Volkswagen has plans to spend around €34 billion on EVs, autonomous driving and new mobility services by 2022, marking one of the most ambitious ‘high-tech’ budgets in the automotive industry. While this will incur significant spending, Volkswagen has plenty of scope to reduce existing manufacturing complexity and costs via scaling back model options, drivetrains and platforms.

The company is also in a strong financial position. At the end of the March 2018, the Automotive division had €24.3 billion in net liquidity and the division’s net cash flow in the quarter was €2.4 billion. Despite ongoing headlines linked to the diesel emissions scandal, car sales have been solid with the Volkswagen Group posting record total unit deliveries of 2.68 million for the quarter, up 7.4% from a year earlier. This was driven by passenger cars, which were up 7.9% to 2.51 million units, while commercial vehicle sales were effectively flat. 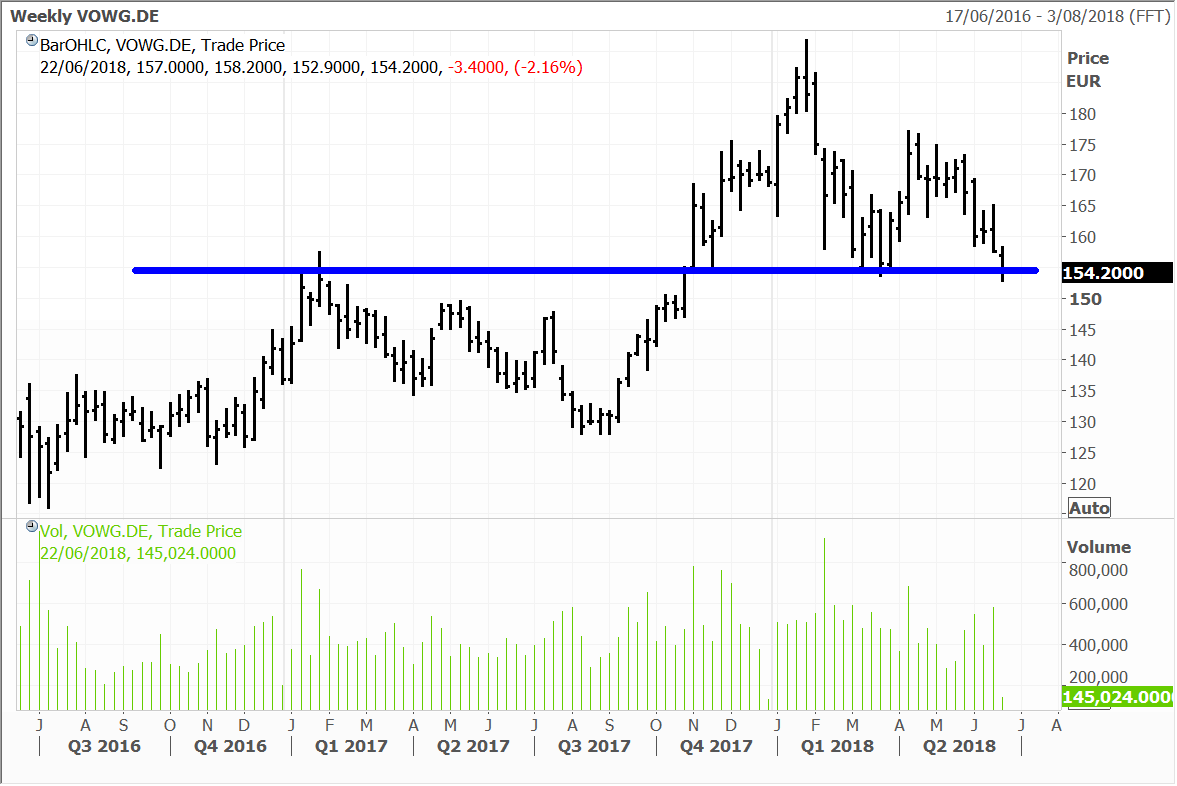