The major US indices closed higher on Wednesday with the tech-heavy Nasdaq leading the way with a 0.63% gain, while the S&P 500 advanced 0.41% and Dow closed 0.25% higher. But it was the Dow Jones Transports and Russell 2000, both which surged 0.8% and 1% respectively, that took the spotlight. The Russell 2000 made new record highs on Wednesday lifting to 1616 for the first time.

The Russell 2000 index is an index measuring the performance of approximately 2,000 small/mid-cap companies in the US. This is important because the breadth of the rally in the US markets since the nadir of the correction has widened. Whilst I think new record highs for the S&P500 and Dow Jones are still some way off, targets towards the top end of their respective ranges are within sight. 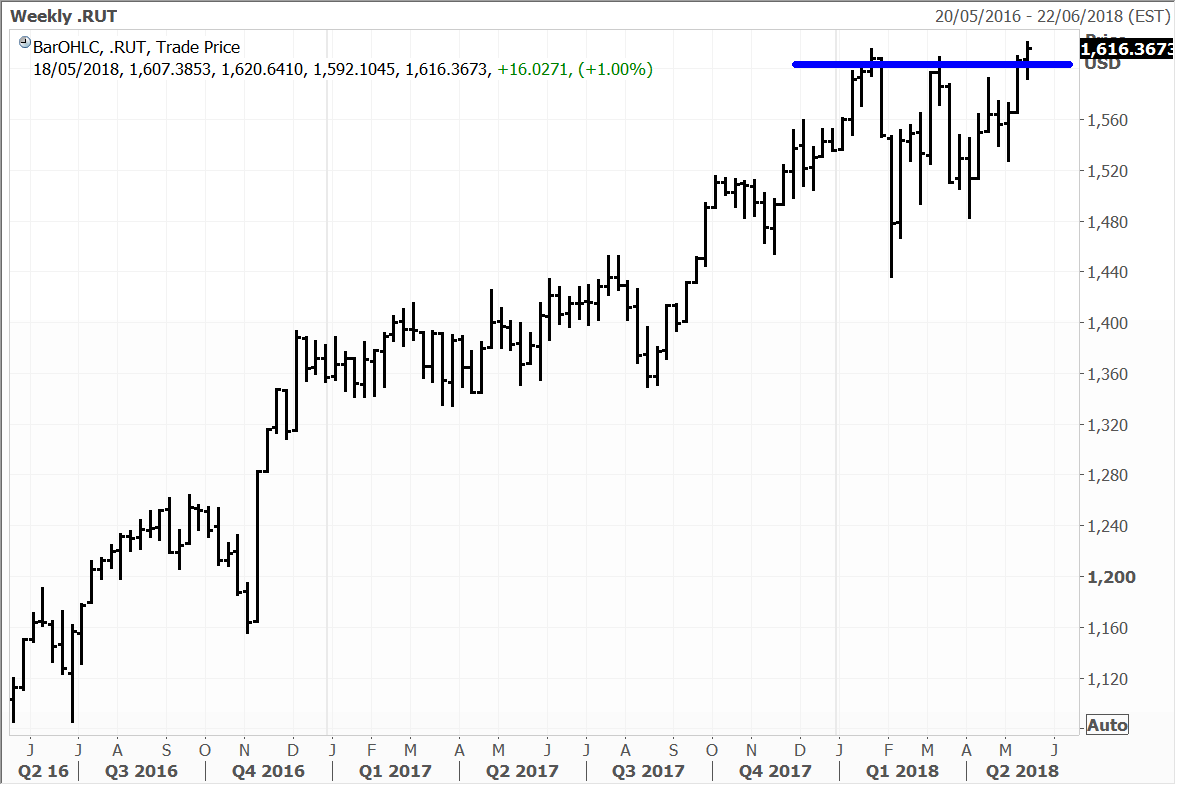 Walt Disney shares were relatively strong, gaining 2% as the Avengers: Infinity War blockbuster continues to dominate cinemas and the early critic reviews of the latest Star Wars movie have been positive overall.

Solo: A Star Wars is an origin story for Hans Solo starring Alden Ehrenreich as the young budding captain of the Millennium Falcon. Aggregation site Rotten Tomatoes has a 71% ‘Fresh’ rating for the movie after 96 reviews. Although that is towards the bottom end of the range for the franchise, it is a solid enough score and welcome considered a troubled path to the screen. Production was a stop-start affair, but director Ron Howard appears to have done a good job after joining the project late in the game. The movie isn’t pegged to be as big as core movies in the franchise, but Star Wars fans will be flocking to cinemas to see how it all began for Hans.

Disney pushed back up above the 200-day moving average. The stock is converging within a triangle trading range in what I think is playing out as a “Teutonic battle between the bulls and the bears”. Someone has to win of course – our money is with the bulls and the old guard media prevailing against the new. Netflix is a great company no question! But valuation is really steep and as Netflix subscriber I have noticed a lot of their original content (not all of it!) can be quite average. Disney/Fox are not going to have the same ‘hit and miss’ problem. We hold Disney in the Fat Prophets Global Contrarian Fund. 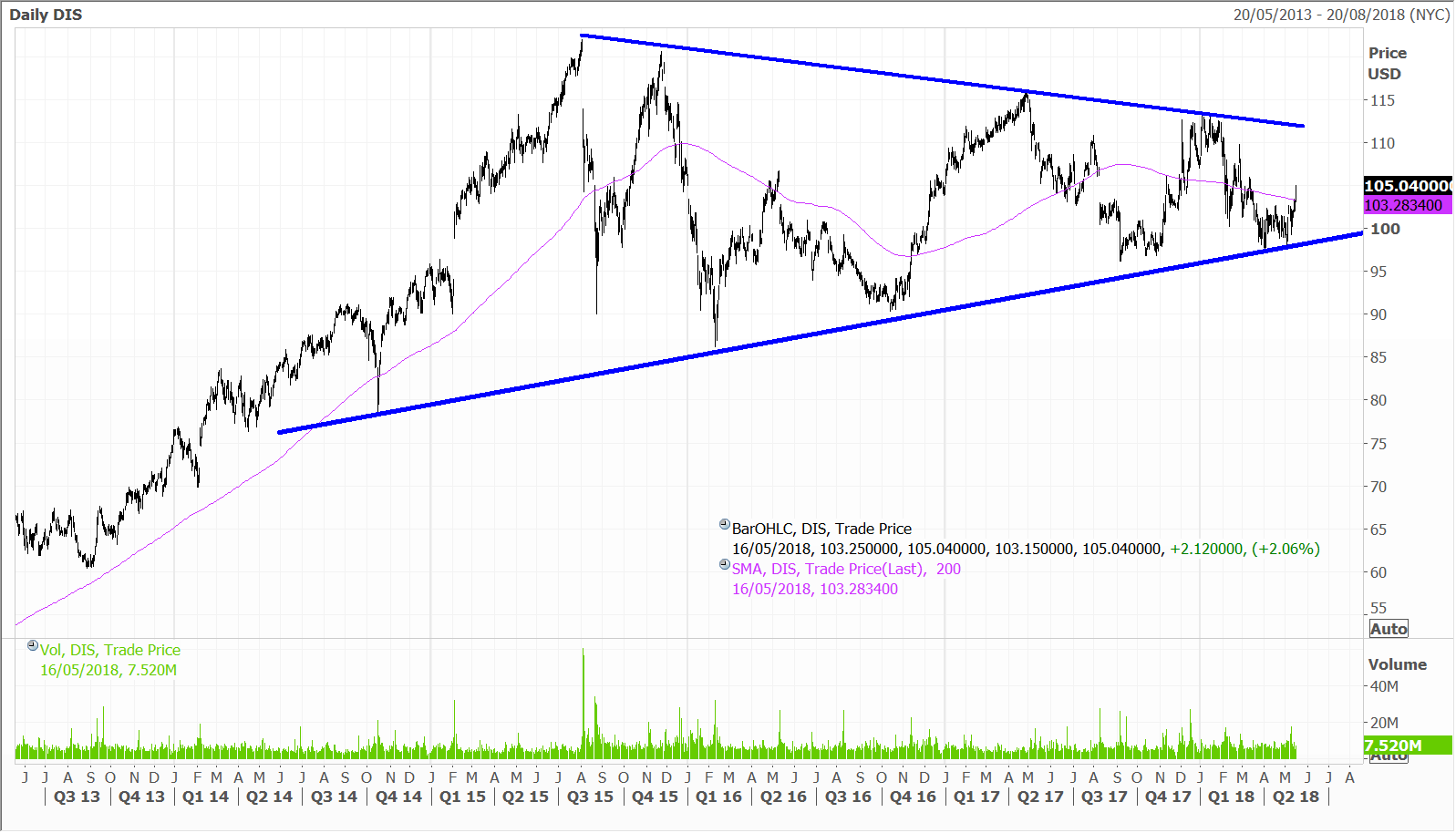 Baidu shares surged over 4% to a record high, supported by a strong quarterly result from peer Tencent Holdings. Baidu is a top 5 holding in the Global Contrarian Fund.

Amid corporate news and movers on the continent, shares of Madrid-headquartered Telepizza surged 8% on the news it had inked a growth alliance deal with global giant Pizza Hut. The deal will see Telepizza become Pizza Hut’s largest master franchisee globally by store count and will almost double its store footprint to more than 2,500 units. The alliance will see Telepizza Group opening 1,300 new stores over the next 10 years in countries covered in the alliance: Spain, Portugal, Latin America (excluding Brazil), the Caribbean and Switzerland. The vast majority will be Pizza Hut branded. 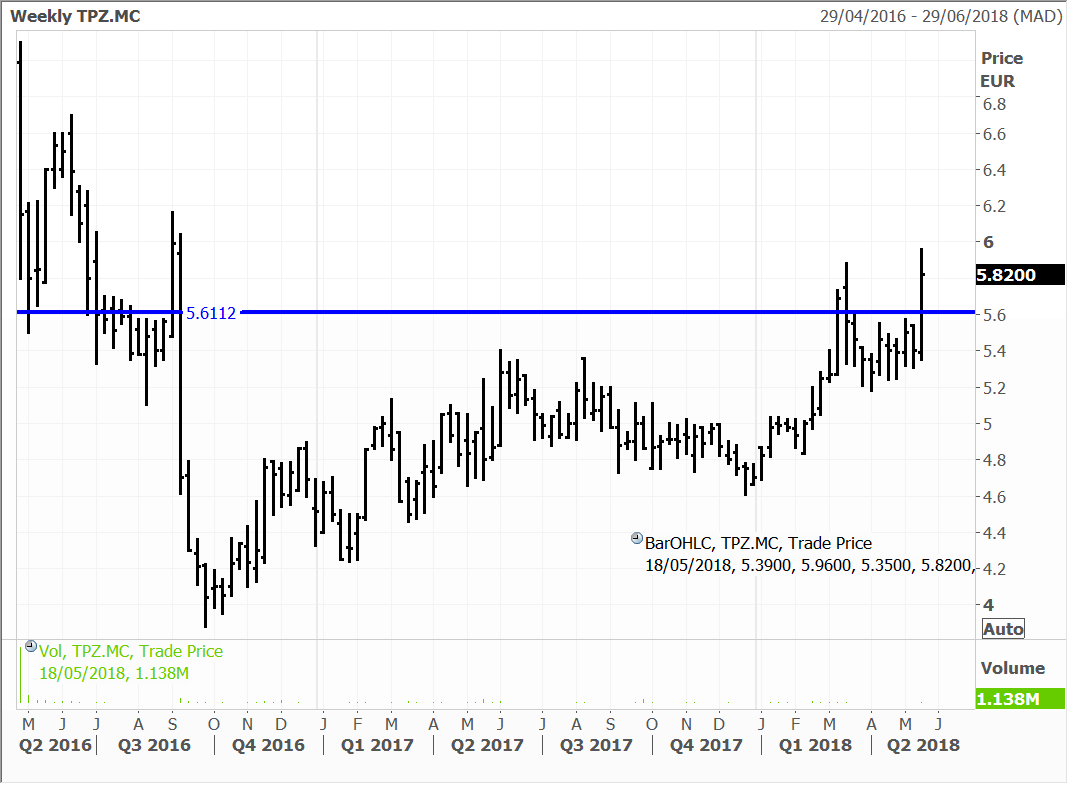 Mitsubishi UFJ led the way to the downside, falling 2.4% after reporting net profit that fell slightly short of expectations. Investors were also underwhelmed with the size of the bank’s proposed share buyback.  Mizuho Financial and Sumitomo Mitsui held up better and were little changed on the day. The response to insurer Dai-Ichi Life’s quarterly report and outlook was more favourable, with the shares gaining 1.9%.

In Australia the market edged back above the 6,100 mark on Wednesday, with the ASX200 adding 9 points to close at 6,107. The banks were mostly firmer, while the resource sector (except gold) was well bid, with BHP and Rio both rising by more than 1%.

The chart below is of the Australian Government Bond 10-Year yield. I think the next move at the longer end of the curve for Australian interest rates is decisively going to be “up’ – regardless of what the RBA does. In the Global Contrarian Fund we have already begun to short Australian bonds as well as owning QBE Insurance, which after a decade of corporate malaise should get a boost from higher interest rates. 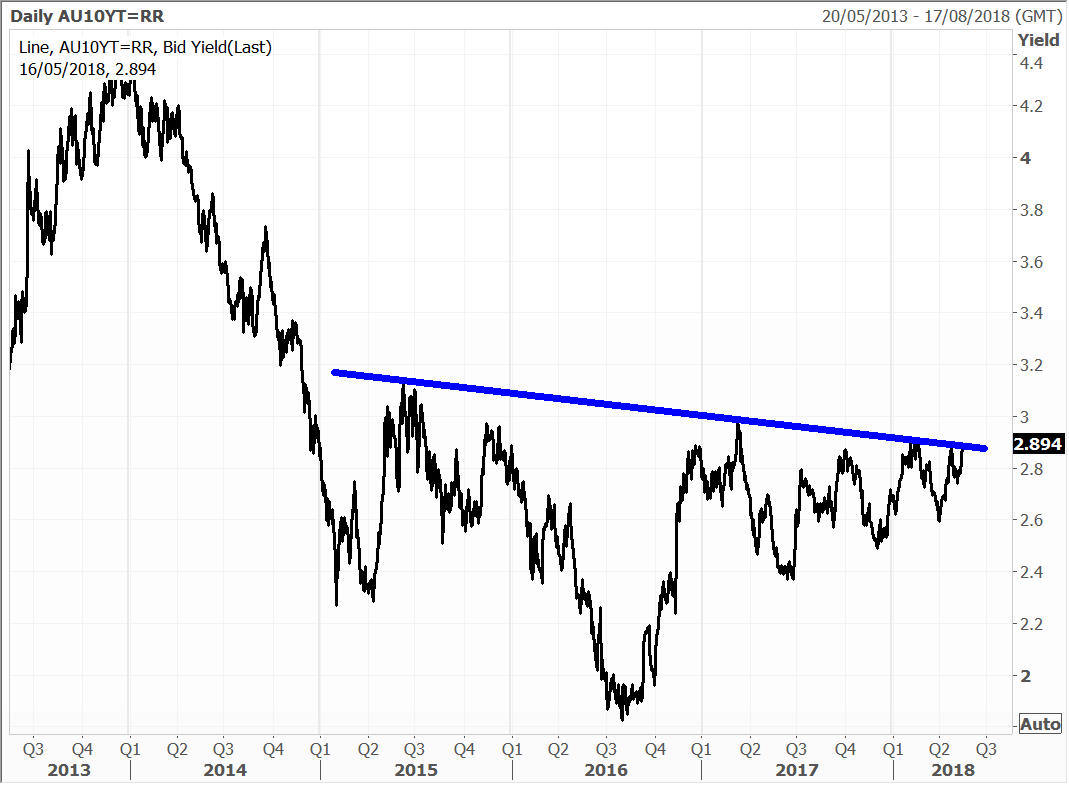 Japanese megabanks have started with major revamps on their domestic retail networks – the cost of running traditional branches weighs severely on the Banks in a time when revenue is diminishing and there is a shift in how consumers conduct financial business.

Japan’s largest lender, MUFG said on Tuesday that it will reduce the number of domestic branches by 20% from about 500 over the next six years. Under the plan the number of retail branches will be halved and some will be replaced with self-service style branches. The company is aiming to cut the employee headcount by 6,000 over the next five years.

At the earnings briefing Chief Executive, Nobuyuki Hirano said: “Domestic branch network’s profitability has been falling.” He added that the bank will fast-track a shift to go digital – in an effort to increase the number of internet banking users by 3-fold to 12 million over the next six years.

MUFG and rival banks are under pressure to reduce cost to increase profits. Costs have slowly been increasing in the presence of a slowdown in revenue growth over the last couple of years. Additionally, aggressive overseas expansion has contributed to higher expenses.

Mizuho Financial Group, the least profitable of the three biggest lenders, is planning on cutting 100 (20%) of their domestic branches by end of 2025 – in addition they will reduce employee headcount by 14,000 in the same timeframe. In total the bank plans to cut more than 100 billion yen in costs. Mizuho CEO Tatsufumi Sakai said: “We have not been able to offset revenue decline with cost control.”

Sumitomo Mitsui Financial Group (SMFG), Japan’s second largest lender by market valuation, stated that they are not planning to cut down on their 430 domestic branches. The bank has however started to replace them with ‘next generation branches’, in a plan that is due for completion by the end of March 2020.

Branch replacement includes relocation to less convenient spots with lower rent, smaller size and lower number of staff and the bulk of the back-office consolidated at off-site hubs. SMFG said that the transition will save them 30 billion yen in in costs – representing 20% of all retail branches expenses. SMFG CEO, Takeshi Kunibe said: “We don’t necessarily have to have branches in the prime spots, like we did in the past, in order to meet customers’ needs.” 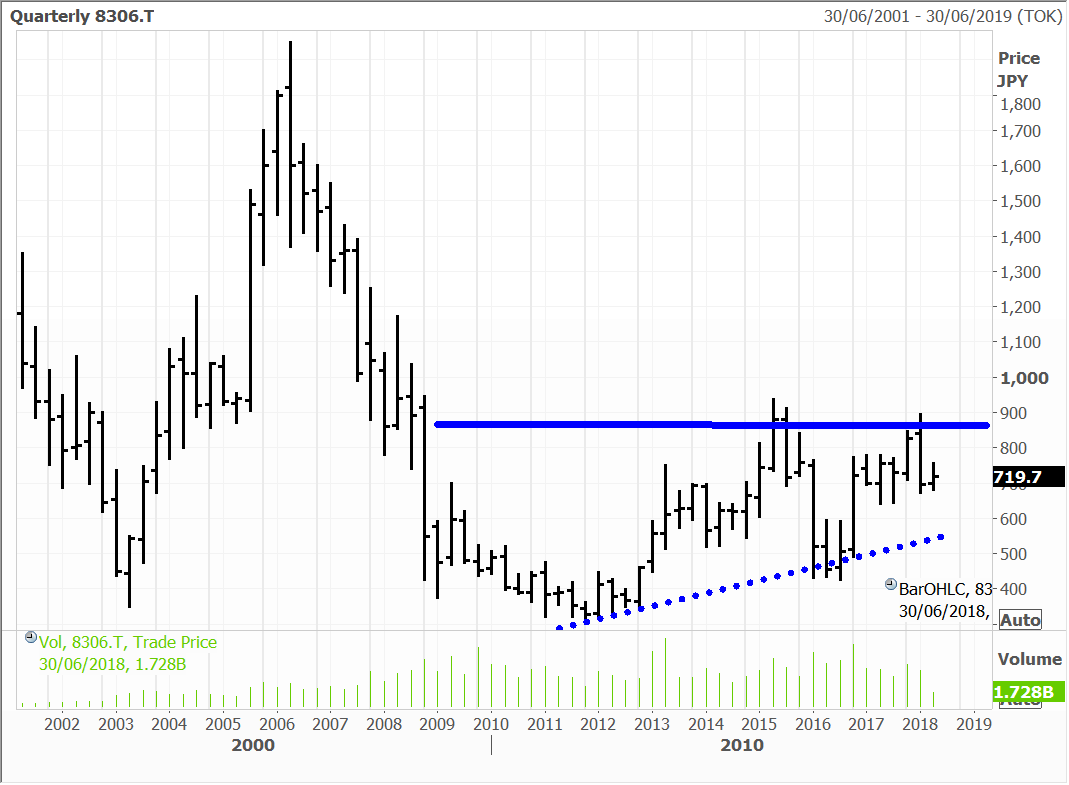 Company sales increased 33% in China, 18% in Japan and 26% elsewhere in Asia. Operating profit slightly dipped below the third quarter from 32.9% to 31.9% in the fourth quarter but this was as a direct result attributable to currency fluctuations.

SMC spent 23 billion yen on capital expenditures for the financial year ended – the company plans to aggressively accelerate capital spending to 40 billion yen in the next financial year. The company is enjoying strong demand and company projections underscore its robust earning potential.

For the next year the company projects sales of 610 billion yen representing a 3% increase, and operating profit of 200 billion yen, higher by 4% – assuming a 105yen/$1 exchange rate. The company tends to make conservative projections with analysts expecting sales of 660 billion yen. 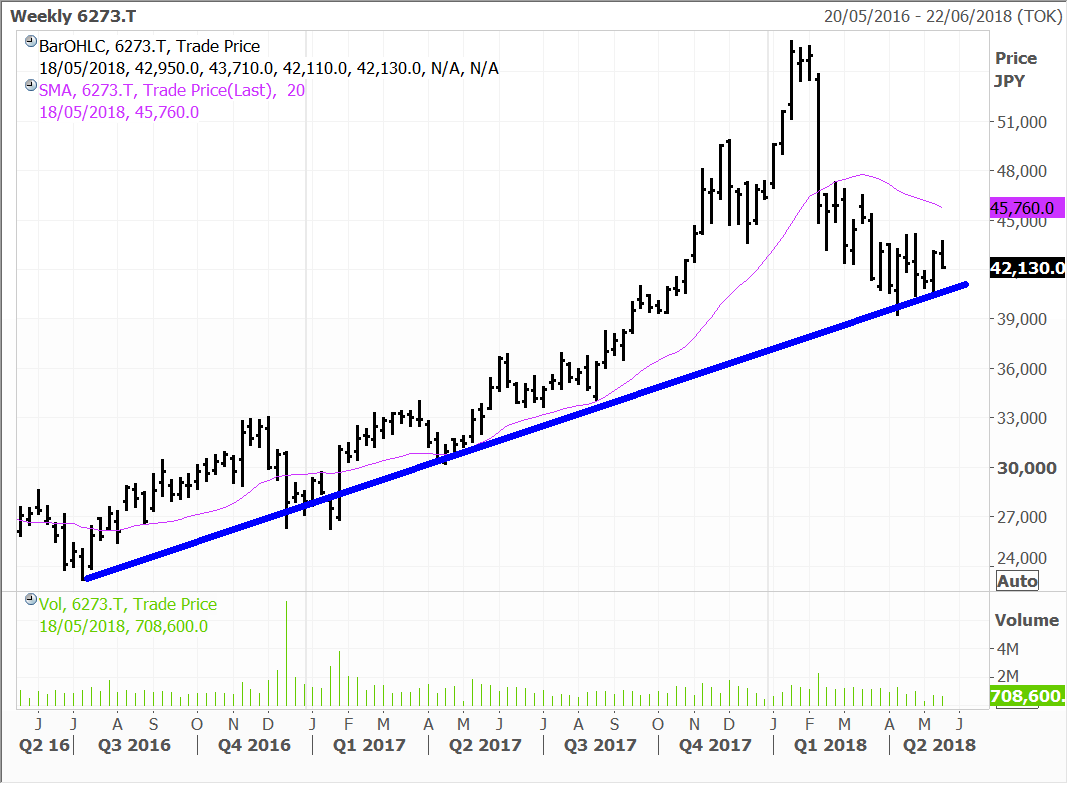