After the shorter Easter holiday in the US, markets opened sharply lower, with the tech sector leading the way. Volumes and liquidity remained light with Europe still on holiday. While catalysts were cited such as China’s retaliatory action on tariffs and recent tweet attacks towards Amazon from the President, the reality is that the ‘hot air’ continues to come out of technology, with the Nasdaq bearing the brunt of the today’s decline. This is where most of the damage was done and what affected sentiment the most on Monday. The Dow Jones and S&P500 declined 1.9% and 2.2% respectively on Monday, while the Nasdaq was down 2.9%.

A lot of the news headlines tagged catalysts for the selloff which were relatively stale, so I think the main factor was the ongoing reweighting by institutions out of technology stocks after the sector enjoyed an historic advance last year. Amazon and Netflix lost more than 5% and bore the brunt of the selling while Microsoft, Facebook and Google declined in line with the Nasdaq – losing around 2.8%. Apple notably lost only 0.6% after announcing plans to manufacture its own chips. Tesla came in for some significant selling today, losing 5% as a slew of bad news has hit sentiment.

Amazon fell 6% after President Donald Trump again attacked the online retailer over the pricing of its deliveries through the United States Postal Service and promised unspecified changes. Trump tweeted “only fools, or worse, are saying that our money losing Post Office makes money with Amazon. They lose a fortune, and this will be changed. Also, our fully tax paying retailers are closing stores all over the country…not a level playing field!” Amazon closed down 5.9% at $1,362.48, wiping out nearly $45 billion from of market value.

We have known for some time that the tech sector, which had a huge run to the upside last year, was in “overvalued and over-owned” territory”.Just as the technology sector led the market on the upside and has been relatively resilient, the downward move in the past two months seems to have finally caught up with the broader US indices.

In terms of tech, in the Global Contrarian fund we hold only Baidu in the US (down 1.4% on Monday) and after reducing exposure in December. In the Global Opportunities managed account portfolio we significantly reduced exposure to Google and Tencent in February, and we remain underweight the sector.

The Nasdaq has finally succumbed to the broader correction in the market. Monday’s correction saw the Nasdaq close down 2.9% but still well above the 200-day moving average. 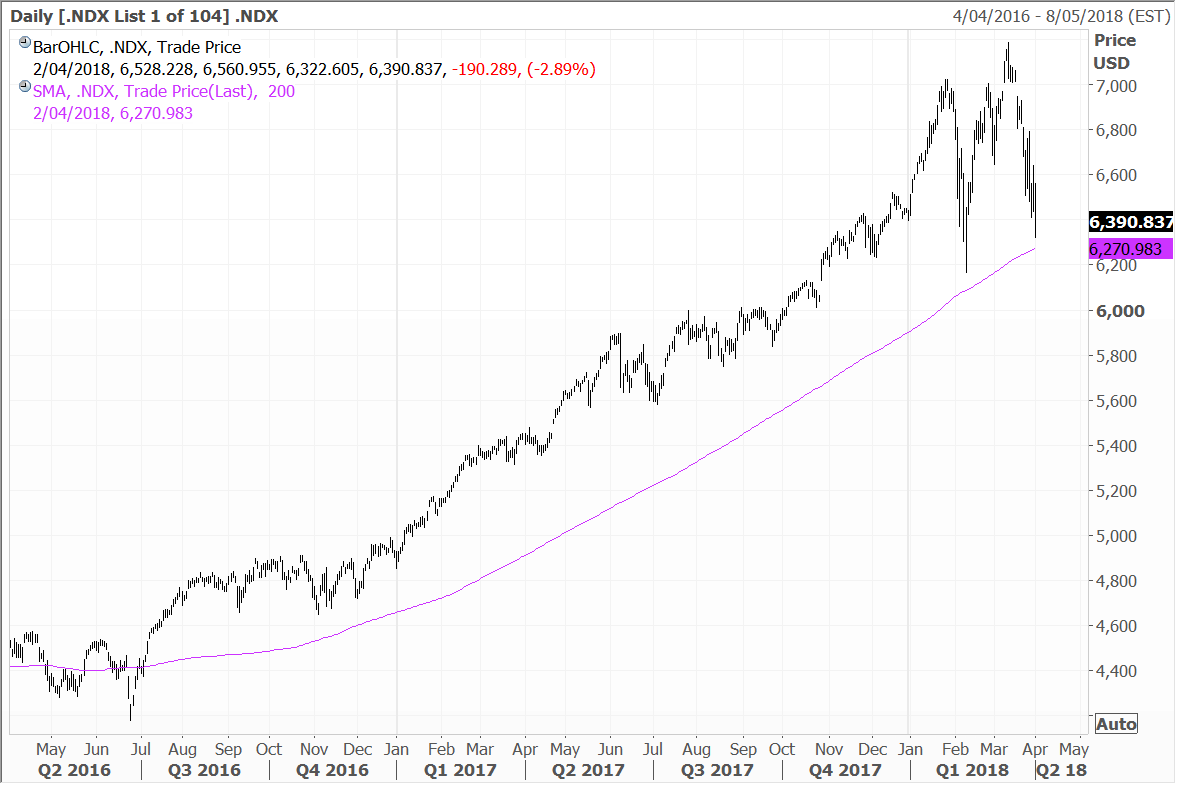 The move to risk off also took its toll on oil prices with WTI losing more than 3% on Monday (Brent crude trading was closed with the European holiday on Monday). West Texas Crude oil closed down 3.2% at $62.80. Trading volumes were 20% lower than normal on account of the Easter holidays. There was also speculation that the deepening trade rift between the US and China would see demand weaken. There were also reports that Saudi Arabia in particular might lower the prices it charges to Asian customers.

WTI remains on an upward trajectory, which was checked on Monday 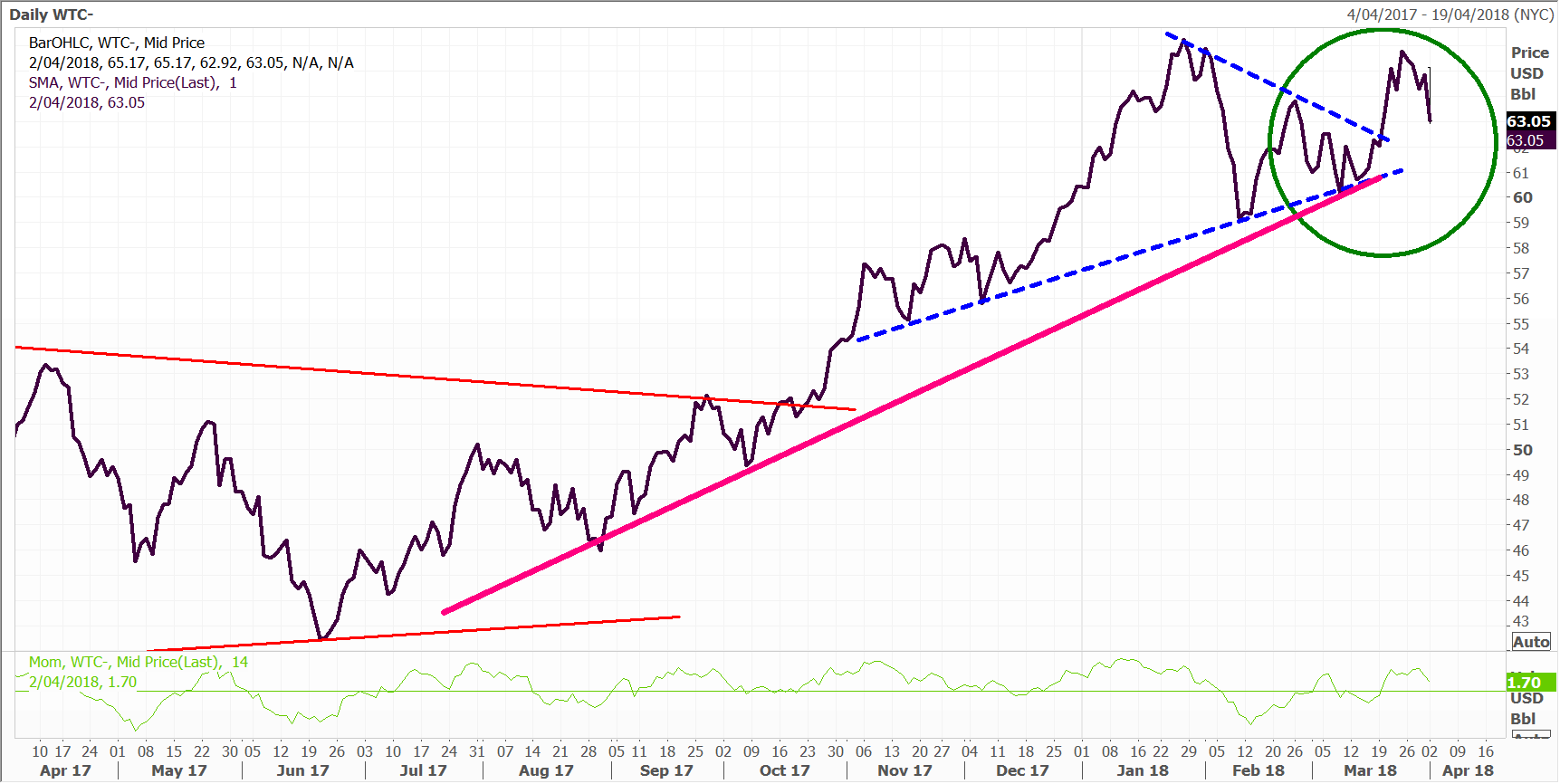 Sentiment was undermined by questions over output compliance by the world’s large energy producers. A separate report showed that Russian output rose in March to 10.97 million barrels of oil per day (bpd) in March, from 10.95 million in the previous month. Historically quota cheating has often been an issue with previous unilateral output cuts.

Oil prices have leapt over the past year as the world’s largest producers have successfully constrained supply against a backdrop of rising production. This has also offset the challenge of new supplies from the US shale sector. I think that the big energy producers will not want to see this all unravel by undercutting prices or pushing the envelope on production cut promises.

This particularly goes for Russia, for which oil is the country’s primary source of export revenue. Thanks to rising oil prices, the country’s budget is back in surplus for the first time in years. Russia needs an oil price of around US$55 to balance its books, and I imagine will openly do all it can to make sure prices stay north of this region. I therefore expect that Russia will ultimately look to toe the line.

As for Saudi Arabia, the Kingdom certainly won’t want to see prices weaken materially ahead of the delayed float of 5% of Aramco next year. The float is expected to be worth around $2 trillion and is crucial as the Saudis look to boost their coffers and reduce their dependence on oil.

The biggest risk to the energy sector in my view is that we see demand reverse should the global economy falter. I don’t envision that scenario playing out this year however with still some of the best synchronized growth conditions in decades. The reality however is that while output has risen, this has been soaked up by rising marginal demand.

Globally the surplus of OECD inventories is now below 50 million barrels which compares to more than 300 million barrels a year ago. The oil market therefore remains tight and could see further supply pressure with OPEC signalling that it may extend production cuts into mid-2019. US shale growth has also already been factored in at current market pricing which should keep a floor under WTI. We remain overweight the energy sector in the Global Contrarian Fund and the managed account portfolios.

The risk-off trade boosted precious metals prices benefit, with gold trading 1.2% higher at $1341 and silver prices rallying 1.4%. Clearly for all the bluster about gold’s safe haven appeal diminishing, the reality is that in the current environment gold (and silver) could go much higher this year, particularly if resistance at $1350/1375 gives way on the upside. 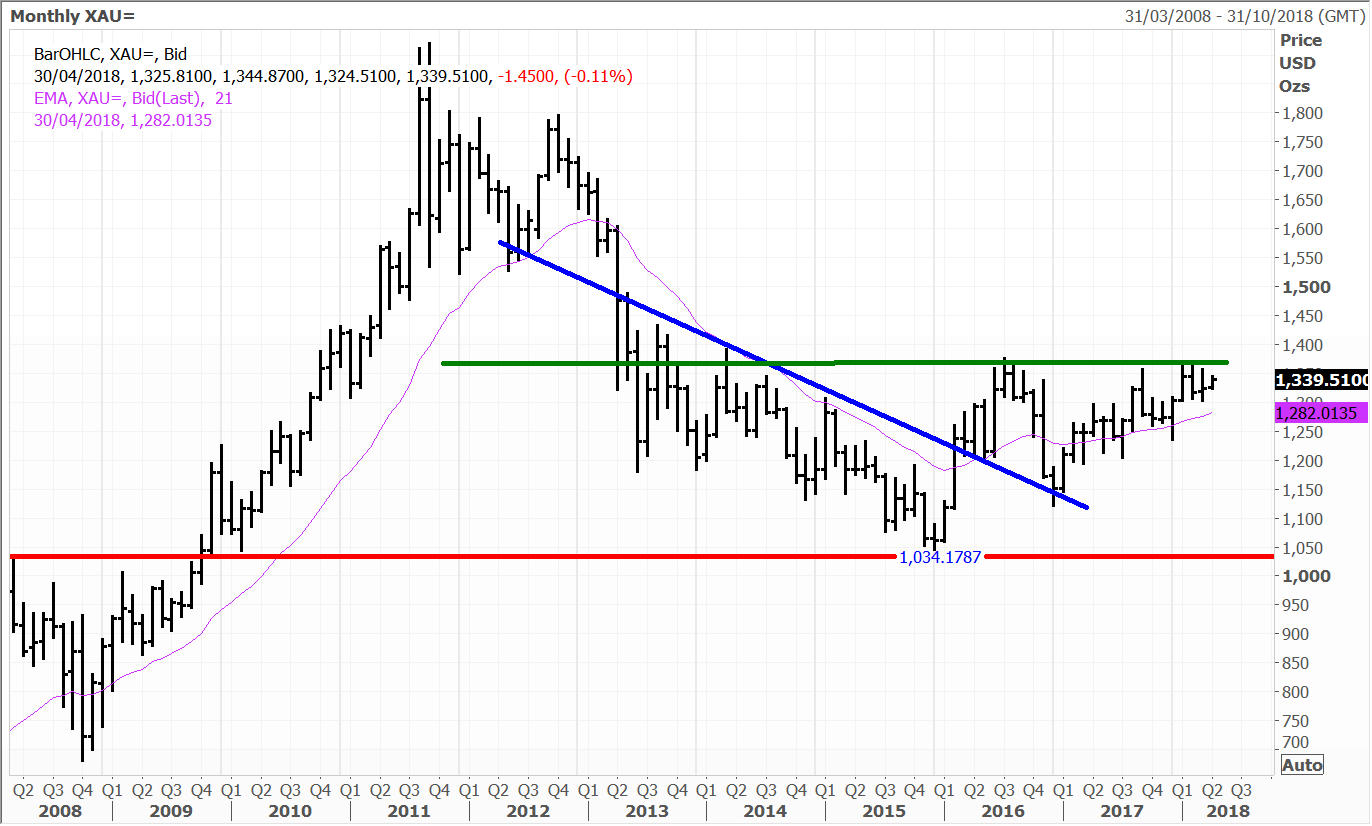 The notion that the likes of bitcoin and other cryptocurrencies are the ‘new gold’ is sadly off the mark in our view. Gold has stood the test of time as a safe haven for centuries, and this is not about to change any time soon.

Gold differs from many other commodities, and one point to note is that the industrial demand/supply equation is not particularly supportive, and is set to be in surplus supply for another year. The real story is however investment demand, and we see this increasing further as inflationary and volatility pressures continue to build.

As we have seen in previous gold rallies, sentiment can change very quickly. I think when the resistance cap highlighted above finally gives way this year the move will potentially be explosive. The other point to note is that the gold sector itself has moved up on a fairly modest increase in gold prices. This is why we remain overweight the sector, and we continue to favour high quality producers such as Evolution and Saracen which we hold in the Australian managed account portfolios. In the overseas managed accounts, we hold stocks such as Randgold Resources and Coeur Mining, which offer significant leverage to strength in precious metals prices.