The US indices closed amidst heavy selling and large intraday swings after President Donald Trump signed a memorandum on Thursday that “could impose tariffs on up to $60 billion of imports from China”. The memorandum was scant on detail and did not contain any specific tariffs or threats, but was enough to spook investors and just about every sector was sold down aggressively into the close. The Dow and S&P500 closed down 2.9% and 2.5% respectively, while the Nasdaq lost 2.4%.

After being down nearly 2%, the US indices rallied initially after the trade memorandum was released without containing any specific details and as investors discounted the trade threats. But this gave way to fear with the Dow moving into the close with a reversal taking the index down over 700 points for a total loss of 2.93%.  The hardest hit Dow constituents were exporters such as Caterpillar -5.7%, Boeing -5%, 3M -4.7% and GE which lost around 3.8%. The investment banks all had a bad day led by sharp falls in Goldman Sachs and JP Morgan. 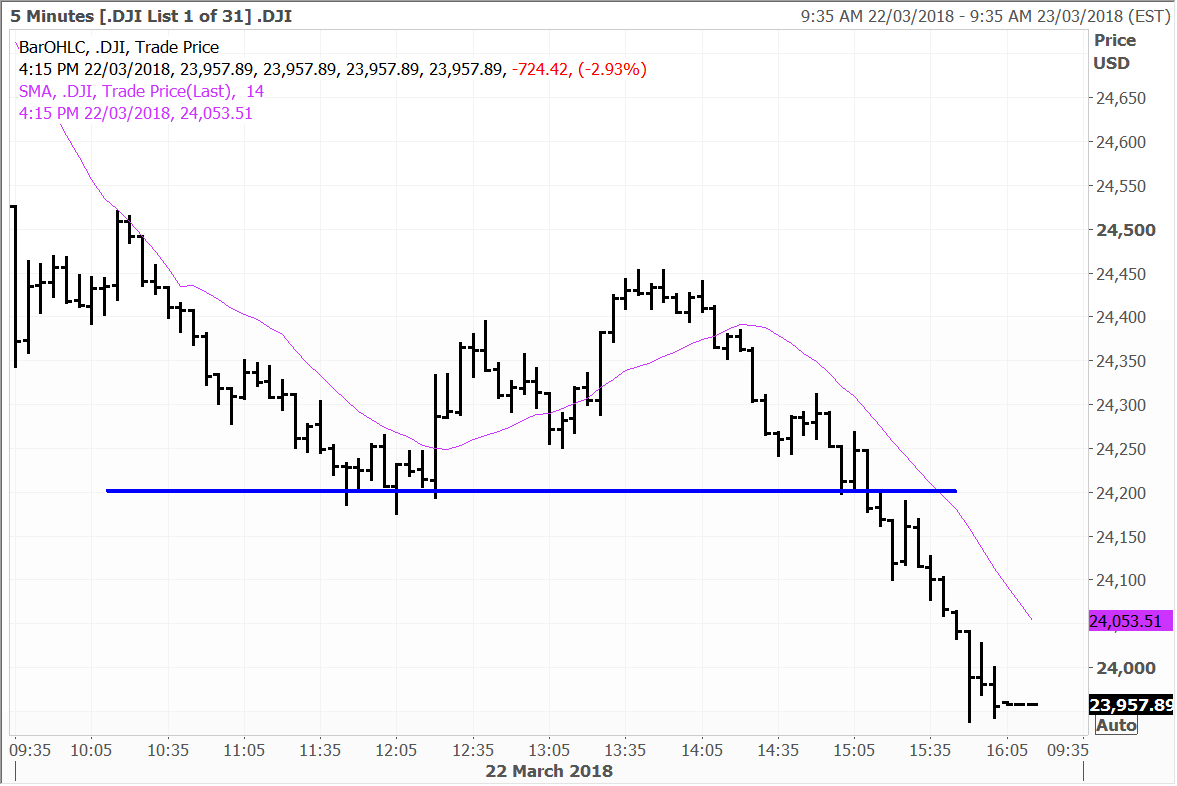 Under the terms of the memorandum, Trump is going to “make good on an electoral promise” and directly target Chinese imports “but only after a consultation period that will give industry lobbyists and legislators a chance to water down a proposed target list”. China is also to be given “space” to respond to Trump’s memorandum. The President said that “I view them as a friend. We have spoken to China and we are in the middle of negotiations.” Trump also said that the loss of American jobs from unfair trade was one of the main reasons he had been elected in 2016.

This was enough for the markets to hit a wall of red, which for much of this week had been treading water, not really knowing how to discount the threats from the White House and the real possibility of retaliatory action. I still maintain that Trump is trying to hold true to the constituency that elected him, and that even he would not be that stupid (one would hope!) to actually start a trade war.

A trade war would not be won by America. The global economy would lose, but the US would perhaps be more exposed. On the export side, the US agricultural belt would be hard hit such as the soybean and wheat sectors, and this is where much of Trump’s political support is domiciled, not to mention Dow constituents such as Boeing and Caterpillar. And on the import side.

An Industry Lobby group said in a statement on the tariffs that “we urge the Trump administration to consider the impact these escalating tariff actions will have on farm country”. Farm incomes in the US are at their second-lowest level since 2003 in inflation-adjusted terms. Be careful for what you wish for. The same farm belt were strong supporters of Donald Trump during the election.

US consumers could also face the prospects of sharply rising consumer prices with everything coming in from China such as clothes and shoes leading directly to sharply higher levels of price inflation.

So Trump’s trade policy is totally flawed and ineptly thought out if it is enacted on as the White House has threatened. But is he negotiating? Is this more about saving face with his political supporters and shoring up a foundation for the next election? I think so. And given the fact that he more than most Americans has more to lose from a trade war – including the next election – I doubt the threats that he has on the table will be followed through on. Rather that this seems to be another “negotiating tactic” where the balls are thrown up in the air, and seeing where the dust settles.

In September last year the markets had to weather the escalating tensions and rhetoric between North Korea and I think this latest volatility over a global trade war has a similar parallel. But that did not stop the US indices getting hammered today. And of course, the problem for investors is that within the next 24 hours the Trump Administration could easily make a few comments about the “true intentions” of the trade policy that could turn infuse a rally. So this not an easy time for the markets.

In terms of the technical damage done today, the Dow declined to test support near the February lows, however at this stage the index has yet to break those lows on the downside. The Dow still remains well above the 200 day moving average, which is still overextended, but much of the gap has now closed – which is positive. For now, the advance in the Dow and indeed the other US indices is over and “consolidation” is going to remain the order of the day until the “rapidly dissipating” overbought conditions are eliminated. The markets over the interim are going to be volatile and highly susceptible to White House policy making, until a clearer path on trade becomes more obvious. 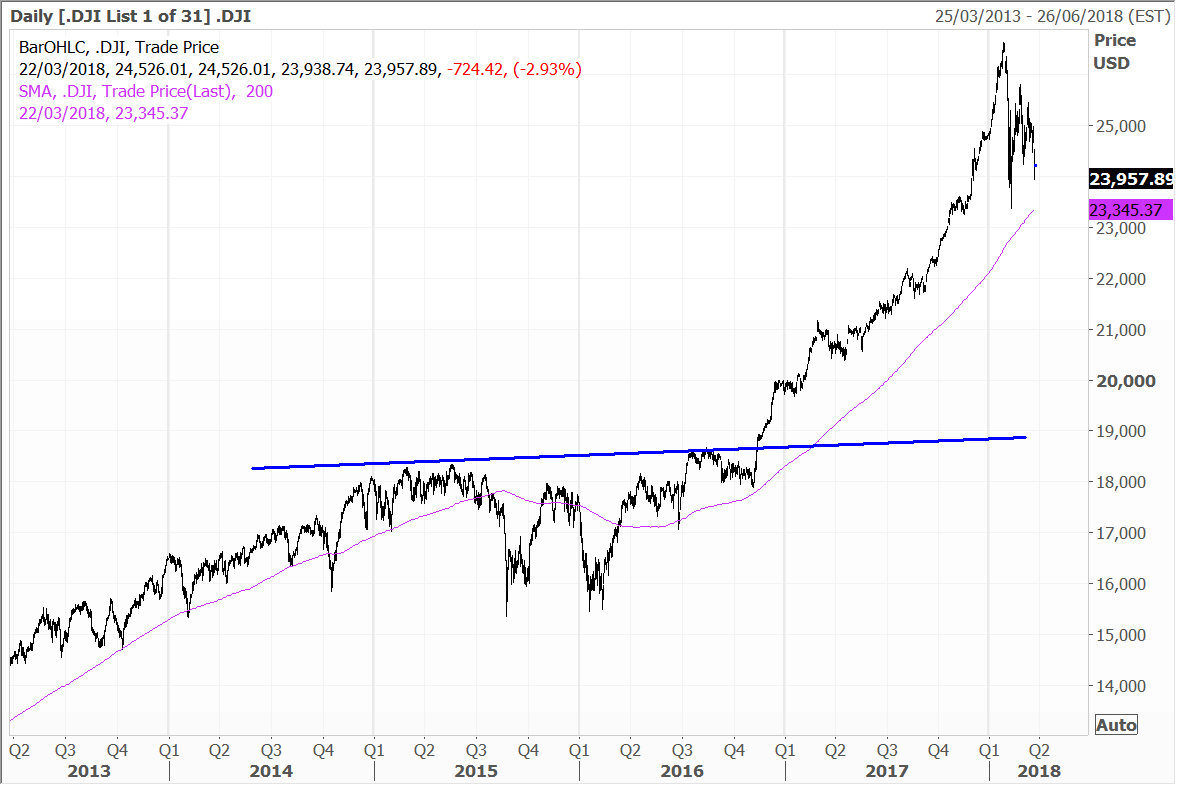 European stocks drifted down Thursday and ended in negative territory, with soft European zone data weighing on sentiment. The pan-European Stoxx 600 fell 1.76% for the day, while the Euro Stoxx 50 index of eurozone blue-chip stocks was down 1.55%.

The euro area private sector expanded at the slowest pace in more than a year in March according to flash data from IHS Markit. The composite output index dipped to 55.3 in March from 57.1 in February. German business sentiment worsened to an 11-month low in March as firms were less positive about the months ahead. The business climate index fell to 114.7 from 115.4 in February. Spirits King Heineken edged up 0.3% in Amsterdam, while Heidelberg Cement lost 2.3%.

Asian stocks were mixed in trading Thursday after the Federal Reserve announced its expected decision to raise the benchmark interest rate by 25 basis points and project three rate hikes in 2018. The Nikkei rose around 1% in choppy trading even with mixed manufacturing data and a lift in the yen against the dollar.

The Shanghai Composite shed 0.53% after the central banks raised its short-term interest rates for the first time this year in reaction to the Fed’s rate hike. The 7-day reverse repo rate was increased by 5 basis points to 2.55%. The benchmark Hong Kong index fell 1.09%.

In Hong Kong, oil and gas major CNOOC edged up 0.5%, and the profit taking on the Macau casino operators continued after their strong run over the past year. MGM China, Sands China and Wynn Macau slipped between 0.2% and 2.1%. CNOOC, MGM, Sands and Wynn Macau are held in the Global Contrarian Fund. Tencent holdings tumbled 5.0% after a rare results disappointment.

The equity market in Australia drifted lower on Thursday, with the ASX200 shedding 13 points to close at 5,937. Most sectors were lower although resource stocks bucked the trend. BHP and South32 were firmly bid and both rallied 2.7%. We are overweight both stocks in the managed account portfolios and own them in the Global Contrarian fund. In addition to similar thematic tailwinds (with South32 also having a precious metals angle), there are company specific value catalysts on the horizon, with both miners looking at meaningful divestments.

I wrote about Nufarm yesterday and the shares rose another 1.6% on Thursday to $8.85. The interim results were certainly strong, and recent acquisitions have positioned the company strongly for the future. The brokers are also noticing, with Morgan Stanley recommending being ‘overweight.’ We also have a bullish view, with a holding in the Global Contrarian Fund, along in the Australian managed account portfolios.