Wall Street encountered heavy selling again on Friday to close out the worst week since February with the US indices just 2% above the lows. There was no real fundamental reason for the selling on Friday with a lot of the earlier concerns over the Trump Administration’s threat to impose tariffs on China receding as it becomes clearer to the markets that the “threats” will probably not be enacted on entirely. It is highly probable that the Trump Administration will ‘water down’ the tariffs as it negotiates with China. As I wrote last week, Trump does not want to derail the US economy or the stock market, and will use the threat of the tariffs as a means to negotiate.

The rise in the US 10 Year bond yield that triggered February’s selloff is also no longer as much of a negative catalyst with the rate falling to 2.82%. Record short positions are being unwound and of course after last week’s rout in the stock market, bonds benefited from the usual ‘flight to safety”. With the end of the first quarter approaching this week, markets should soon return to focusing on fundamentals with the first companies due to report earnings in a fortnight.

I would expect the market to begin stabilising soon as investors take comfort from the fact that the backdrop to corporate earnings has been the best in years. With the US economy remaining strong we should see this come through in the reporting season I think this will be the lever that shifts focus back onto a fundamental framework. This is particularly so now that the S&P500 has returned to offering relative value at a 16X multiple.

We also have to remind ourselves that this is not 2008 and the ensuing GFC that was precipitated by the unravelling of a corporate and financial sector that was bloated on credit.This is really more about the market undergoing a decent correction after record long period of low volatility. Whilst last week’s equity market losses were painful, the squall that has dominated trading for the past 8 weeks could not have been easily predicted – but could disappear as quickly as it arrived.

Whilst we were early in calling the end of the correction last month, I do think the dust will settle soon, particularly with valuations now being compelling once again and the momentum in the US and global economies unlikely to recede in the near future.

On Friday the Dow was down 1.77%, the Nasdaq slumped 2.43% and the S&P 500 was off 2.10%. The net result for what was a torrid week was the S&P 500 lost 6% to close near the February lows. Technicians will no doubt be focused on those lows and as to whether the S&P500 will retest on the downside, but as I have argued above, the market’s attention should quickly turn to the reporting season in two weeks’ time. The S&P500 closed dead on the 200 day moving average on Friday, and given the absence of any significant negative catalysts, this could provide impetus for a bounce later this week. 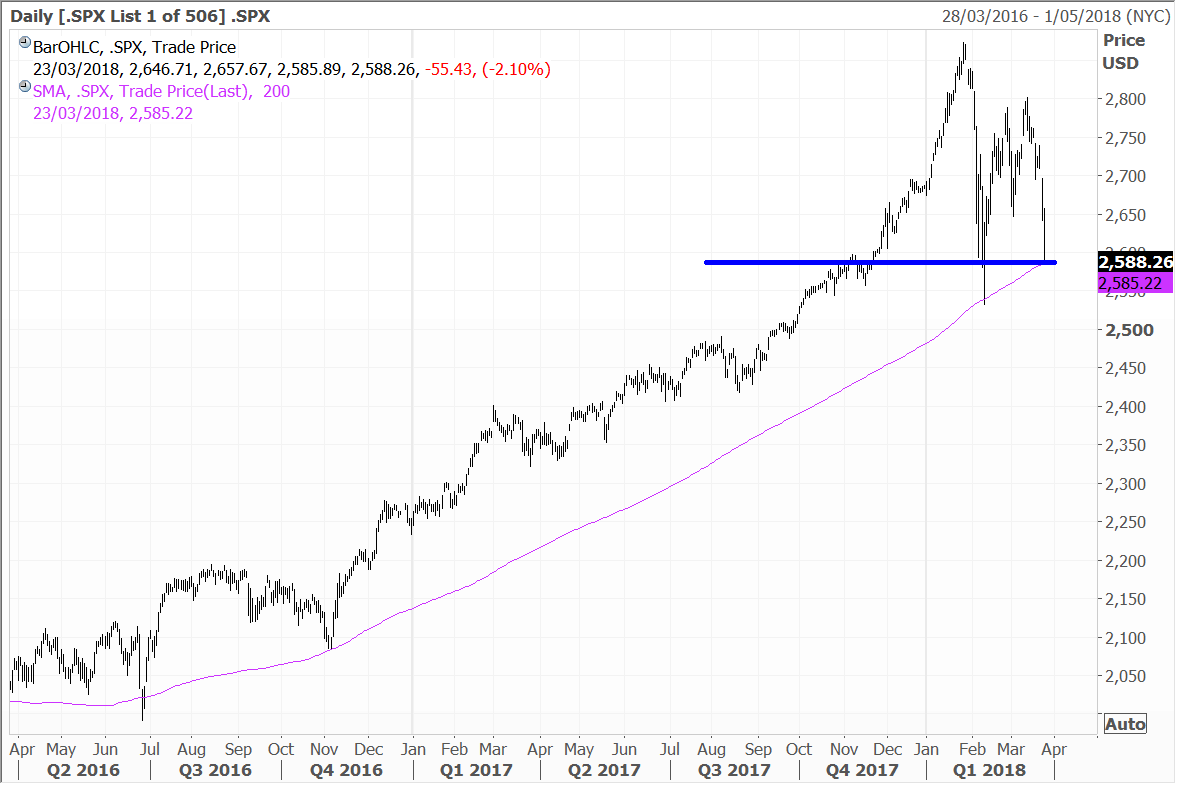 European stocks slid again Friday on trade war concerns and investment flows moving to safe haven assets. The pan-European Stoxx 600 was down 0.90% for the day, with the Euro Stoxx 50 index of eurozone blue-chip stocks sliding 1.49%. There were no major economic data releases on the day.

Automakers were among the biggest losers on the day, due to concerns of cost input inflation in a tit-for-tat trade battle. BMW and Volkswagen closed 2.4% and 2.7% lower respectively. Pan-European stock exchange operator Euronext shed 1.9% and banks generally traded lower, with BNP Paribas down 1.5%, Bankia edging down 0.8% and Caixabank 0.5% lower. Deutsche Bank fell in trading as well as its asset management arm listed in Frankfurt amid the current uncertain market conditions. Bankia, Caixabank and Volkswagen are held in the Global Contrarian Fund and the Global managed account portfolios. BMW is recommended by the research team.

Asian stocks slumped on Friday, with fears of a trade war at the forefront of investors’ minds and flows redirected to safe haven assets such as gold and the yen. Besides the tariffs announced, the market also seemed to be agitated by the appointment of John Bolton to the national security advisor role.

Japanese equities were hit hardest in the region as the yen rose to its highest level in more than a year against the greenback (US$). The Nikkei tumbled 4.51% to its lowest level in more than five months. Like the US, investor attention will likely shift back to corporate earnings as the reporting season gets underway in two weeks’ time. Japan’s economy is having a resurgence and this will come through.

Exporters were hard hit by the strengthening of the yen, particularly those with significant China customer exposure. The machinery sector slid 5.6% and construction equipment maker Komatsu fell 6.3%. Industrial robotics makers Fanuc and Yaskawa Electric slid 4.4% and 4.9% respectively, although in the case of the latter company, the shares have still more than doubled (+110%) over the past 12 months.

Truck maker Hino Motors lost 3.6% and Sony held up relatively well, sliding just 2.7%. The megabanks Mizuho, Mitsubishi UFJ and Sumitomo all lost ground, but fared better than the broader market with losses of 1.1% to 3.6%. Fanuc, Sony, Hino, Mizuho, Mitsubishi UFJ and Sumitomo are held in the Global Contrarian Fund. Yaskawa is a holding in the managed account portfolios. The slump in Japanese equities came about even as consumer prices rose 1.5% year-on-year in February, in line with expectations and marginally up from the 1.4% increase logged in January.

For Australia, how China takes matters from here is also very relevant. Around a third of our exports go to the country, with commodities accounting for the lion’s share. The nerves over this situation were clearly apparent on Friday, with big producers BHP, Rio and South32 down 3.1%, 4.4%, and 5.3% respectively.  We hold all three names in our managed account portfolios, with BHP and S32 also in the Global Contrarian Fund, but I don’t believe that recent developments herald the end of our bullish outlook for commodities. As discussed above, oil made new medium term highs on Friday.

Safe haven appeal saw the gold sector buck the trend on Friday, with Newcrest and Evolution in positive territory. I remain of the view that the bigger story for gold will be the inflationary while a weaker A$ will boost margins for the gold producers and the resources sector generally.

China’s capital city Beijing, has given the green light to technology giant Baidu Inc to test self-driving vehicles on city streets. This is an important step for the country that will move them closer to the finish in a global race for autonomous vehicles. The permits given to Baidu will allow them to test self-driving cars on 33 roads covering almost 105 kilometres around the lesser populated suburbs of the city.

“With supportive policies, we believe that Beijing will become a rising hub for the autonomous driving industry,” Baidu’s VP Zhao Cheng said. The move to provide licences for self-driving cars indicates the support from China for autonomous vehicles especially after the global industry suffered from a fatal accident that involved a self-driving Uber vehicle in the USA earlier this month.

Baidu announced in September 2017 that they have a $1.5 billion autonomous driving fund and plans to invest in 100 self-drive projects over the next 3 years. The firm is aiming to have self-driving cars on the streets in China by 2019. Baidu is a holding in the Global Contrarian Fund and the Global Opportunities managed account portfolio. 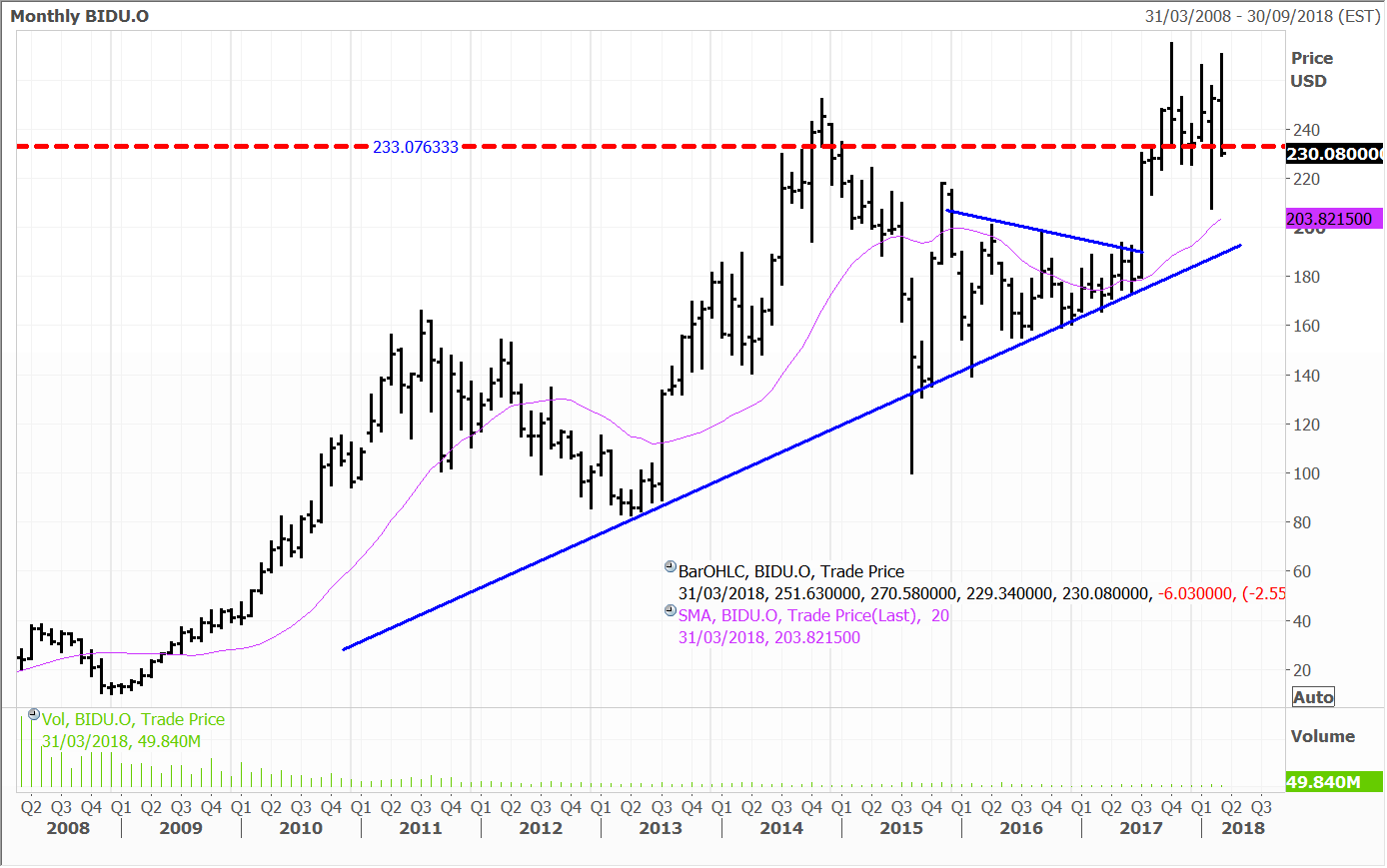 Casino operator Wynn Macau reported their annual results for the year ended 31 December 2017 after market close on Friday. Casino revenues increased 63.6% from HK$20.5 billion to HK$33.6 billion, other revenues increased 55.7%. Profit attributable to shareholders stood at HK$3.7 billion, a 157% increase for the same period last year. Earnings per share came in higher by 153% at HK$0.71 vs HK$0.28 a year ago.

The board has declared a special dividend of HK$0.75 per share for shareholders who own the stock on 16 April 2018. Wynn Macau is up over 78% over the last twelve months and has been a star performer for us. Wynn Macau the largest holding in the Global Contrarian Fund and is also held in the Asian managed account portfolio. 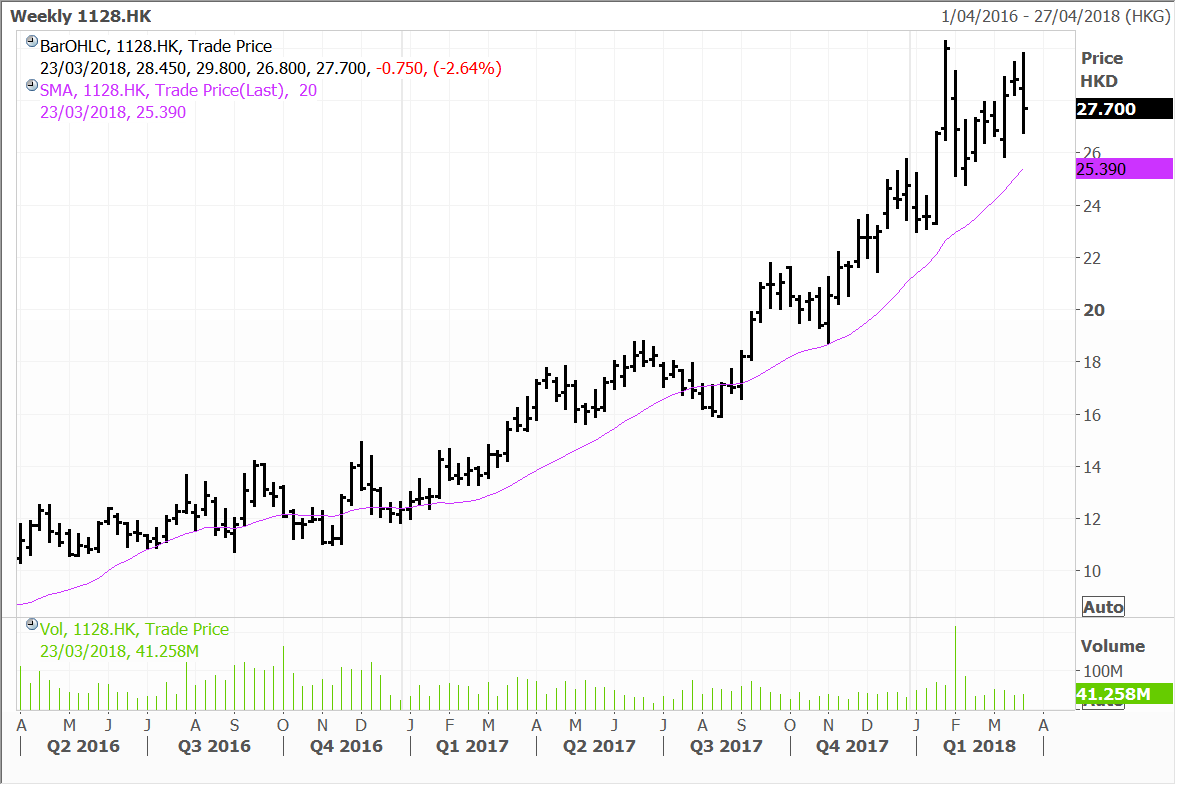 German-listed shares of Heidelberg Cement were caught up in the broader sell-off and slipped 1.3% on Friday, despite reporting some record numbers for the 2017 year the day before. Revenue surged 14% to €17.3 billion despite a foreign currency headwind of €311 million. The figure was supported by the integration of the Italcementi business.

Management reported the integration is progressing faster than planned and consequently, the synergies target of €470 million has been lifted to €550 million. By the end of 2017 Heidelberg had achieved €513 million in synergies a year earlier than planned.

Free cash flow increased 10% to €1.4 billion and the company chipped away at debt, paring net debt from €9.0 billion to roughly €8.7 billion at year-end. Heidelberg is held in the managed account portfolios and the Global Contrarian Fund. 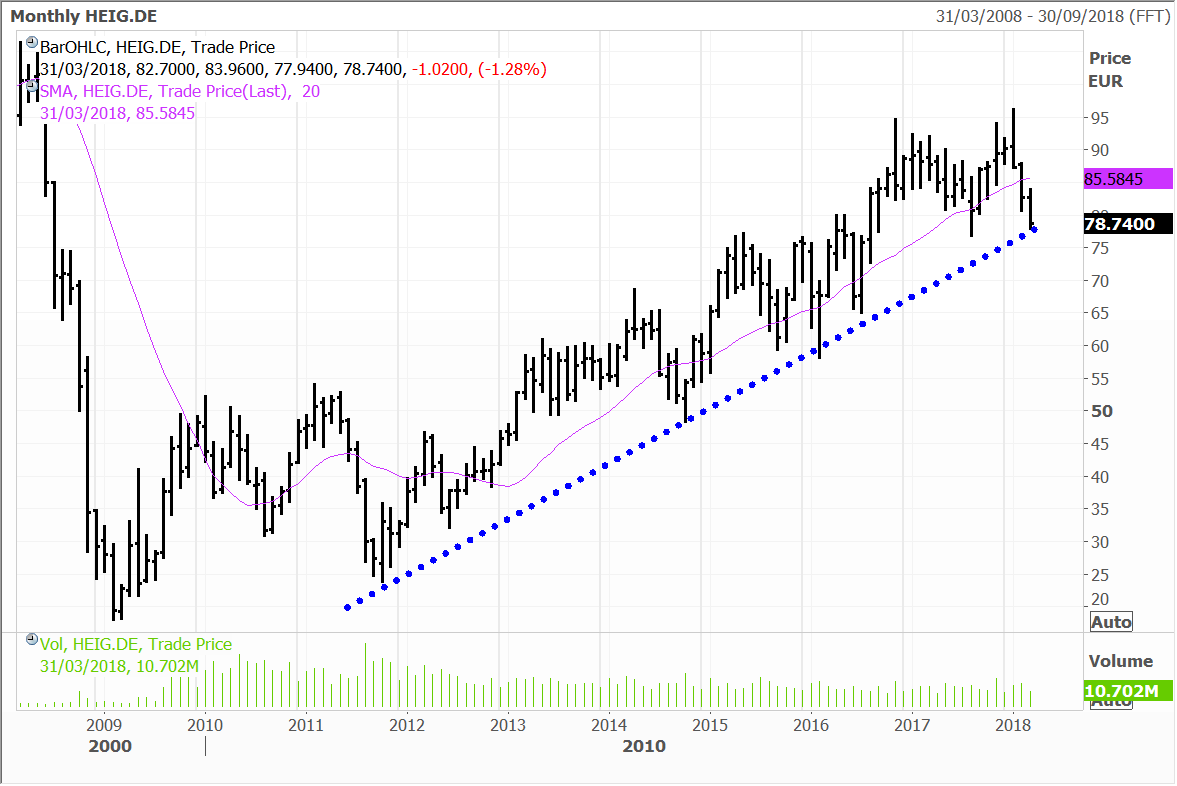