The tech-heavy Nasdaq closed flat on Friday, while the Dow advanced 0.29% and the S&P 500 ticked up 0.17%. Trading was supported on one hand by an improvement in consumer sentiment and a sharp increase in industrial output, however ongoing political uncertainty in the US and persistent trade war friction weighed on the market.

The Washington Post reported that President Donald Trump is planning on yet another senior change in his administration, with national security advisor H.R. McMaster to be ousted. The Wall Street Journal subsequently confirmed the report, but added the timing of the change is unclear and could be some time off. The White House spin though was different saying the President has a good working relationship with McMaster.

US industrial production surged in February, which was boosted by strong increases in output at factories and mines. The rise in production was likely driven by increased investment spending following the drop in corporate income tax cuts, which came into effect in January. The Federal Reserve confirmed that industrial production jumped 1.1% in February which was the largest increase in four months, following a 0.3% decline in January.

Manufacturing output staged the largest rise within the sector, lifting 1.2% – the biggest gain since October. Production at mines rose 4.3% and this was mainly on the back of an 11.6% surge in oil and gas well drilling as US shale output ramps up. Industrial capacity utilization – a measure of how fully firms are using their resources – increased 0.7% to 78.1%. This is the highest level since April 2008 and is now well above the 20-year average. 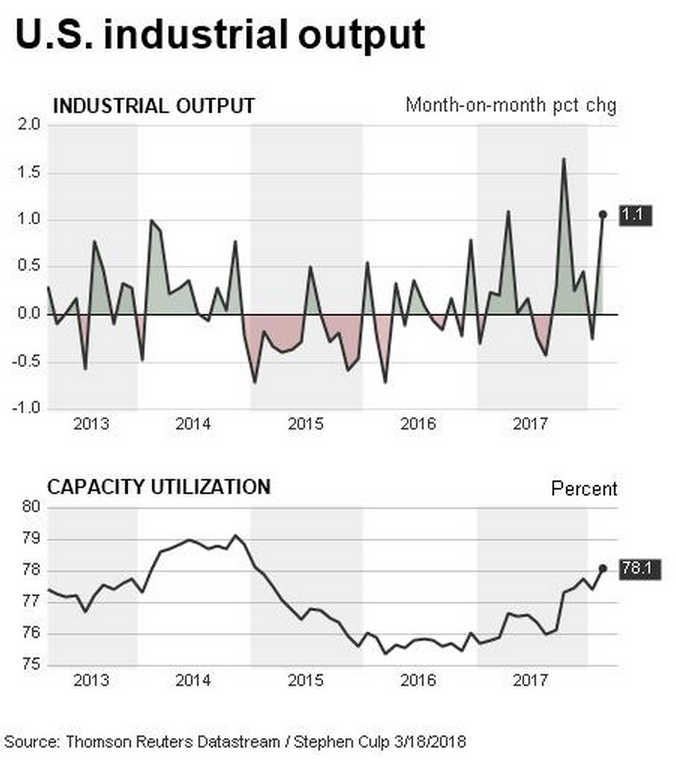 With capacity utilization at 20-year highs, inflationary pressures are building and the stage is set for a jump in prices later this year especially with the labour market the tightest in more than four decades. While we are yet to see a jump in wage growth, this must be around the corner so the day of the goldilocks economy enduring must be numbered.

However, weighing on the positive economic data was a separate report from the Commerce Department confirming that housing starts had declined 7% to a seasonally adjusted annual rate of 1.236 million units. The catalyst was a sharp drop in the construction of multi-family housing units which offset a second straight monthly increase in single-family projects.

I don’t think this will prove to be a trend however with a strong labour market and the lowest unemployment rate in 17 years, not to mention a still very low interest rate environment. One survey on Thursday showed confidence among homebuilders dipping in March, but remaining in strong territory. This week the big event for the markets will be the FOMC when the Fed sits down to decide on interest rates. A 25 basis points rise is virtually a certainty, but all eyes will be on the accompanying rhetoric as Jerome Powell gives his inaugural statement.

European stocks were choppy in trading Friday, with a decline in inflation and trade war fears weighing on investor sentiment, but major indices eked out modest gains at the close after Wall Street opened on a positive note. The pan-European Stoxx 600 advanced 0.22% for the day, while the Euro Stoxx 50 index of eurozone blue-chip stocks was up 0.86%.

In corporate news and movers, Fraport, the operator of Frankfurt airport fell 3.2% after group profit for fiscal 2017 declined 10%. In Holland, Altice shares rose 2.7% after confirming it will sell telecom towers in Portugal and France. It was a solid day for many Spanish stocks, with Bankia up 1.5% and Caixabank rising 1.8%, while Telepizza shares surged 3.5%. In France, BNP Paribus closed 1.0% higher. Bankia, Caixabank, Telepizza are held in the Fat Prophets Global Contrarian Fund and the European managed account portfolio.

The FTSE 100 ticked up 0.34% Friday, with banks gaining after the Bank of England’s Financial Policy Committee (FPC) said they don’t need to boost capital reserves. There were no surprises from its meeting last week.

Asian stocks mostly closed lower Friday with political uncertainty in the US and persistent trade war fears dampening sentiment. The Nikkei slipped 0.58% Friday, with a few other headwinds at play. The yen strengthened which generally weighs on the export-heavy benchmark, official data showed industrial production declined more than expected and the land sale scandal continues to be a bone of contention.

The Shanghai Composite closed 0.65% lower, while the benchmark Hong Kong index edged down 0.12%. Property developer China Overseas Land and Investment ticked up another 0.5%, while insurer Ping An gained 0.8%. Social media giant Tencent Holdings slipped 0.7% and the Macau casino operators, MGM China, Sands China and Wynn Macau drifted down between 1.0% – 1.7%. MGM, Sands and Wynn Macau are held in the Global Contrarian Fund. Tencent, China Overseas and Ping An are holdings in the managed account portfolios.

If you have any questions on the options, feel free to email us at invest@fatprophets.com.au and we can help clarify.

Full details of the options are also included in the initial FPC prospectus, the link for which is http://fpcontrarian.com.au/documents/

In Australia the market was higher on Friday, bucking weakness in Asia, with investors buoyed by an announcement from Wesfarmers. The conglomerate plans to spin off its supermarket business, with Coles set to be a listed entity in its own right. Shares in Wesfarmers rallied 6%. The ASX200 added 28 points to close at 5,949, with energy and resource stocks also seeing good support. South32 was also firmly bid, up 5.6% after receiving a broker upgrade. We hold the stock in the Concentrated Australian, and Mining and Resources managed account portfolios.

The recent trend has been to unlock shareholder value and deliver longer term ‘focus’ benefits through demergers. In Australia several demergers have been successful which include Orora’s separation from Amcor, Domain from Fairfax, Scentre Group’s split from Westfield, and South32 from BHP.

Chinese online search giant Baidu has launched an IPO worth up to $2.4 billion in New York for its video streaming unit called iQiyi. The company plans to offer 125 million American depositary shares priced at $17 to $19 to be listed on the Nasdaq exchange. About half the proceeds will be used to enhance its content offering, with another 10% to be used to strengthen technology and the remainder for general corporate uses.

Underwriters have the option to sell another 18.75 million shares, which if exercised could raise the value of the funding to roughly $2.7 billion. At the midpoint of the initial price range, the value of iQiyi would be about $13.7 billion.

The video streaming unit is a leader in the fast-growing Chinese market and last year agreed on a deal with Netflix to take some of its content, such as “Stranger Things” to the Chinese market. In an interview with CNBC Baidu President Ya-Qin Zhang indicated there could be more deals inked with Netflix. Baidu is held in the Global Contrarian Fund and the managed account portfolios.

If the launching goes through, local investors could have a way of investing in Chinese tech companies that are listed outside mainland China like Baidu Inc, Tencent Holdings, Alibaba Group and JD.com Inc. The reason for the launch of CDRs is part of a larger effort from Beijing to “bring back home its local tech giants”, which have in the past conventionally chose to list outside the Chinese mainland in Hong Kong or New York.

Hong Kong is currently working on the rules that would make it easier for firms to have a secondary listing like for US-listed Alibaba Group. Alibaba which is the highest valued e-commence Chinese firm ($500 billion) has been publicly saying for years that if regulations allowed, they would consider listing in the city.

“Skyworth first started working on TV remote controls 30 years ago, and it is now a leading TV producer globally,” said Baidu Chairman and CEO, Robin Li. “The remote control transformed the way people interacted with their TVs. Baidu DuerOS is using intelligent voice technology to transform human-machine interaction so that in the future, televisions will understand users’ needs – they will not only understand what you say but know what you want before you even speak. This is true intelligence.” Baidu is held in the Global Contrarian Fund and Tencent in the manage account portfolios. 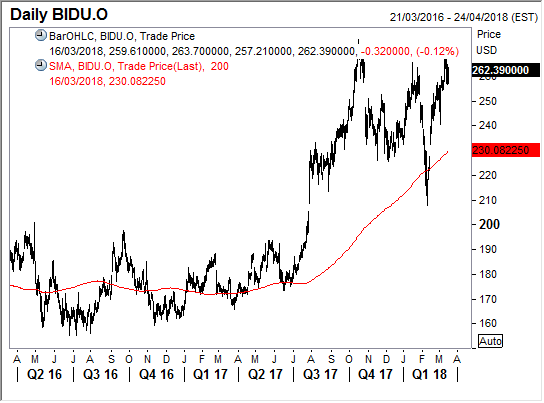 Walt Disney’s “Black Panther” has secured its fifth consecutive weekend at the box office with $27 million from 3,834 locations across America. Disney’s “A Wrinkle in Time” was in fourth place with $16.6 million after its second week on the circuit. “Black Panther” is now only the seventh film in history to pass $600 million at the American box office and achieved this the second fastest. The box office is now at $2.5 billion up 2% over the same period last year and has Disney’s “Black Panther” to thank. Disney is held in the Global Contrarian Fund and in the Global opportunities manage account portfolio. 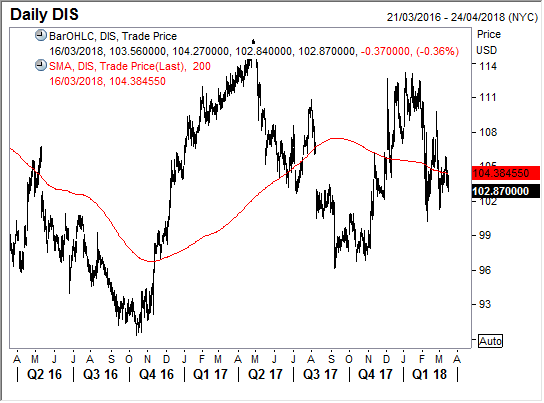