Wall Street came under pressure on Monday, led by a sharp drop in Facebook on allegations that the social media company’s user data was misused. At the close Facebook was down 7%, the largest drop since 2012. Facebook’s fall had a knock on effect for other leading tech names with Apple, Google and Microsoft losing 1.5%, 3.2% and 1.8% respectively. Facebook is now down 13% from the January peak.

All the indices were down in the US with the Nasdaq leading the falls (albeit a recovery into the close) with a 1.8% drop, versus 1.42% for the S&P500 and 1.35% for the Dow. The intraday chart below is of the S&P500 which failed to catch a bid all day until 1pm when the buyers came back in, pushing the index back up off its lows. Monday was really all about a lot of “hot air” in the technology sector coming out of the balloon. 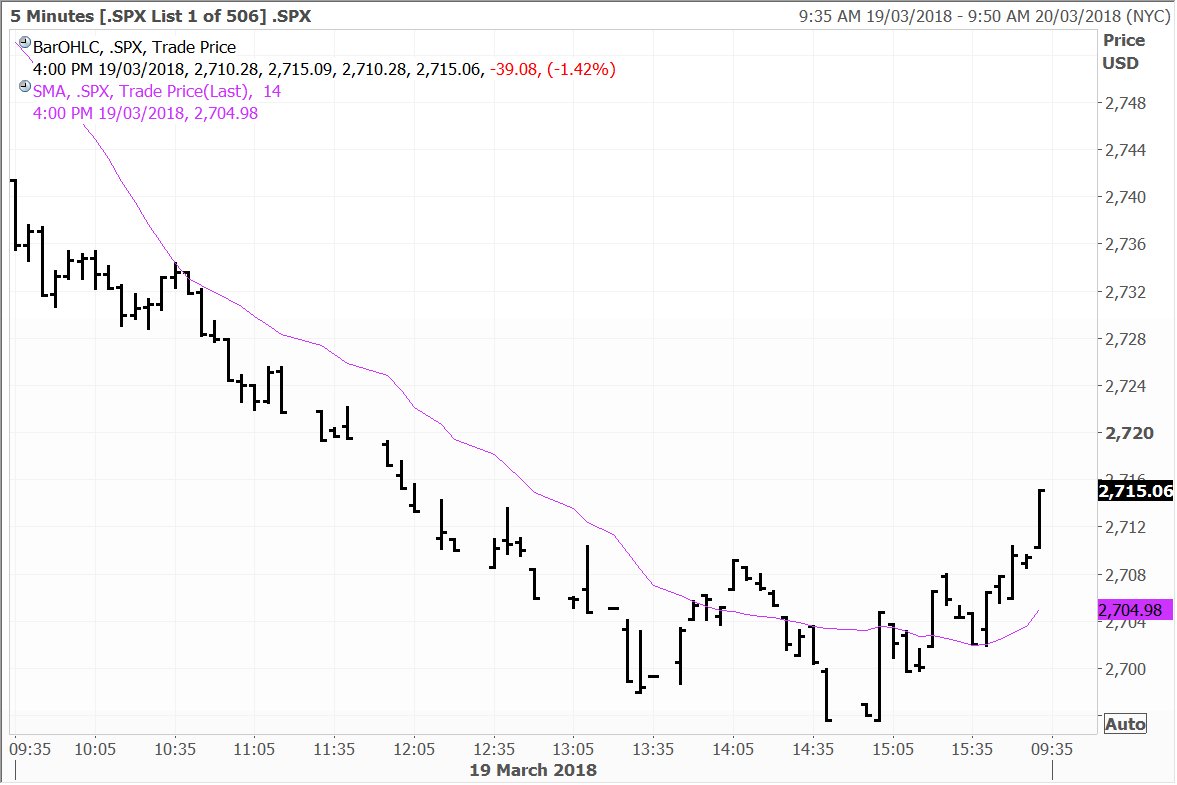 Having said that, markets are definitively cautious going into the two-day FOMC policy meeting set to begin today and the two-day G20 meeting starting later today in Argentina.  As I wrote yesterday, the outcome of the FOMC (which concludes on Wednesday) is not going to be in doubt with a rate hike a virtual certainty, but the rhetoric and language of the statement and what new Fed Chair Jerome Powell says to the markets in his inaugural address will be closely watched and defining for the market.

I expect Mr Powell to be very cautious in his first statement, especially given recent inflation data has been relatively benign. I do not think there is a high probability that Mr Powell will change the current trajectory of 3 rate hikes planned for this year, but he is likely to warn the markets on inflation picking up, particularly given the strong labour market and the fact that the capacity utilization within the economy is near twenty year highs. On balance I don’t think Wednesday will prove to be the time or the place for Powell to warn of a change in settings, and the markets may rally on this.

The Fat Prophets Global Contrarian Fund has minimal US tech exposure, with the exception of Baidu which lost 3.6% amidst the general IT selloff. We also hold Apple, Tencent and Google in the US and global managed accounts but reduced total exposure to these names in February.

Walt Disney shares edged down 1.3% despite good news flow over the past week. Investors also took some gains off the table from Wynn Resorts, which was down 1.7% but remains up over 60% over the past 12 months.

European stocks weakened Monday as investors traded cautiously ahead of the Federal Reserve’s meeting this week when new Fed Chair Jerome Powell’s first press conference will be carefully perused for any further clues on policy. Also weighing on sentiment was continued trade concerns. The pan-European Stoxx 600 slipped 1.07% for the day, while the Euro Stoxx 50 index of eurozone blue-chip stocks was down 1.24%.

London-listed stocks were soft in Monday trading, with the FTSE 100 dropping 1.69% as investors waited on the Federal Reserve meeting and the pound strengthened on prospects of a Brexit transition deal. At a joint press conference with UK Brexit Secretary David Davis, the EU Chief Negotiator Michel Barnier indicated that terms have been agreed, but the Irish border issue remains. A draft of the deal text will go to the European Council for approval on Thursday.

Miners fell on the day, Fresnillo edging down 1.3%, Randgold Resources losing 1.6% and BHP Billiton sliding 3.8%. Bucking the downtrend on the day were budget airlines, with Ryanair gaining 1.1% and Dart Group up 1.6%. Shopping comparison site Moneysupermarket advanced 1.6% and nutrition company Glanbia ticked up 0.4%.

Asian stocks closed mixed on Monday ahead of the Fed meeting. The Nikkei slipped 0.90% as opinion polls showed flagging support for Prime Minister Shinzo Abe due to cronyism scandal that has dominated headlines. That overshadowed preliminary figures from the Ministry of Finance that showed Japan’s exports and imports grew more than anticipated in February. The value of exports rose 1.8% year-over-year, above the 1.4% increase expected. Imports jumped 17% from a year ago, although that was only marginally higher than the forecast 16%.

Most sectors finished in the red, with exporters and food companies among the facing the most pressure.  Robotics company Yaskawa fell 3.8% but peer Fanuc fared much better and rose 0.6% on the day. Energy company Inpex was another bucking the trend, advancing 0.7%, along with truck maker Hino Motors gaining 0.8%. Sony shares slumped 4.2% on Morgan Stanley’s downgrade and the big banks Mizuho, Mitsubishi UFJ and Sumitomo closed 0.8% to 1.5% lower.

Insurer Ping An was one of the better blue-chip performers, up 2.1%. Social media giant Tencent Holdings slipped 0.7% and oil and gas major CNOOC added 1.1%. The Macau casino operators, MGM China, Sands China and Wynn Macau gained between 0.5% – 1.6%. CNOOC, MGM, Sands and Wynn Macau are held in the Global Contrarian Fund. Tencent and Ping An are holdings in the managed account portfolios.

In Australia the market rose on Tuesday, with the ASX200 finishing the session 10 points higher at 5,959. On a choppy trading day it was the energy stocks and miners which underpinned the gains.

Of the two hundred constituents in the ASX200, there are relatively few IT names. Our exposure is limited to Domain Holdings in Australia, which is the second largest competitor to the dominant REA. As I have noted we believe there is a significant opportunity for the Fairfax spin-off to play catch up with much larger competitor REA Group.

The surprise departure of the company’s CEO at the start of the year has not dampened our spirits, and the maiden half year results provided support for our thesis. Digital revenues are growing strongly, and there is much more on offer in our view as Domain makes market share inroads, and targets underpenetrated regions.

Domain is trading at 33 times FY18 earnings, which drops to 26 times for FY19. These are not stretched multiples considering competitor REA Group trades on a similar valuation – but with a $10 billion market cap. Domain is smaller and nimbler and the number two player in the Australian online real estate market, but by definition we believe this should allow earnings to grow faster. We hold Domain in the Global Contrarian Fund as well as in the Concentrated Australian and Small/Mid-cap managed account portfolios.

I think Domain will also benefit as the Australian property market slowly comes off the boil, particularly in the hot spots, and as listings increase. We don’t foresee a collapse, and indeed data from CoreLogic has pointed to a ‘modest reversal’ with Sydney house prices off 1.7% this year. Moody’s are also forecasting prices in Greater Sydney to fall by around 4.2% in 2018, which would not be severe, and also needs to be placed in context of a 13% gain in 2017. 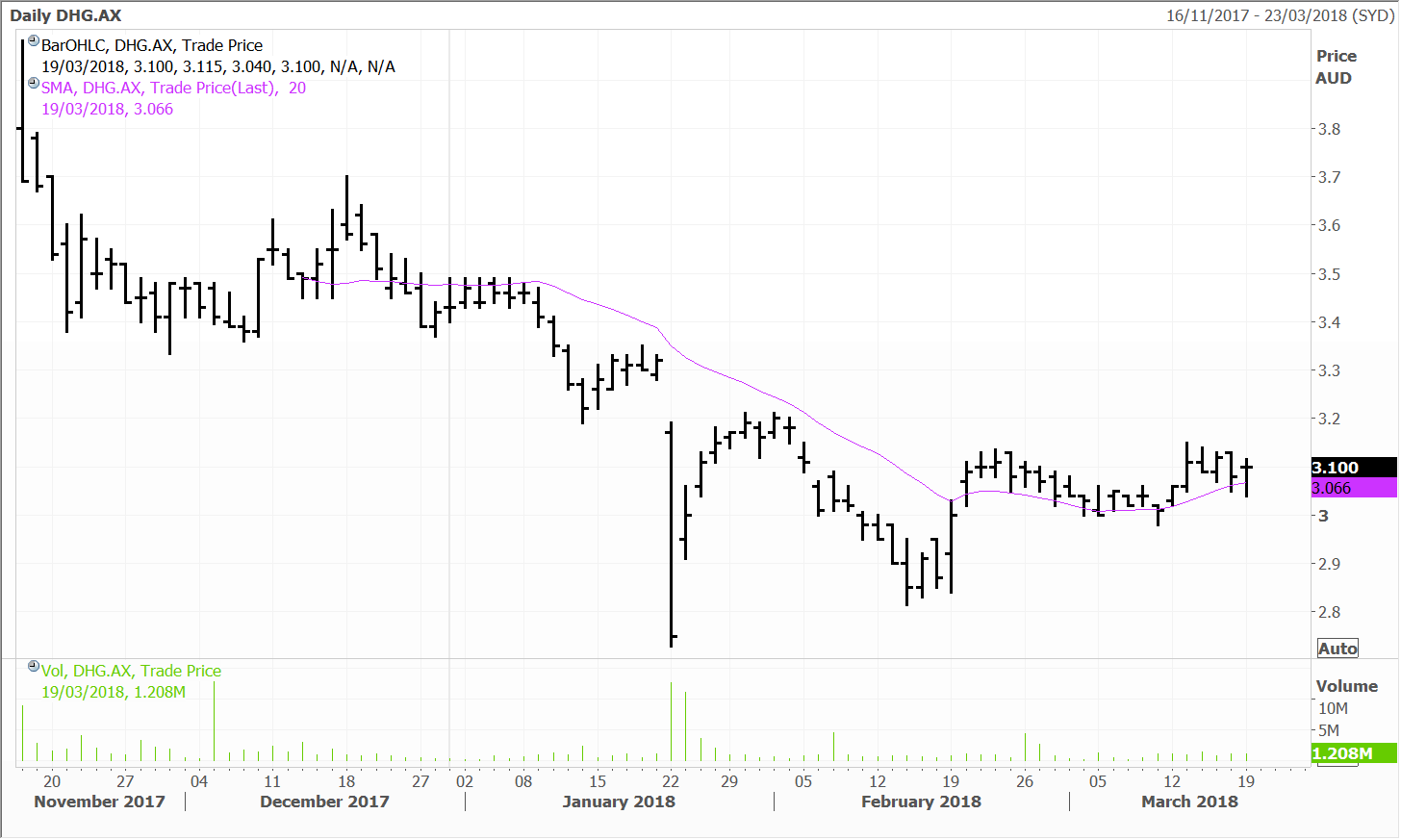 Elsewhere, Evolution had a solid day, up 2.4%. The company has agreed with JV partner to restructure the Tennant Creek JV gold project, in the Northern Territory, to ‘better align assets.’ Evolution will take ownership of those tenements associated with the Gecko-Goanna-Orlando copper-gold prospects. We continue to regard Evolution as a high quality play on rising inflation (and thereby gold prices), with management ever optimising the portfolio, and driving costs down. We hold the EVN in the Global Contrarian Fund and the Concentrated Australian Share, Mining & Resources and Small & Mid Cap managed account portfolios. 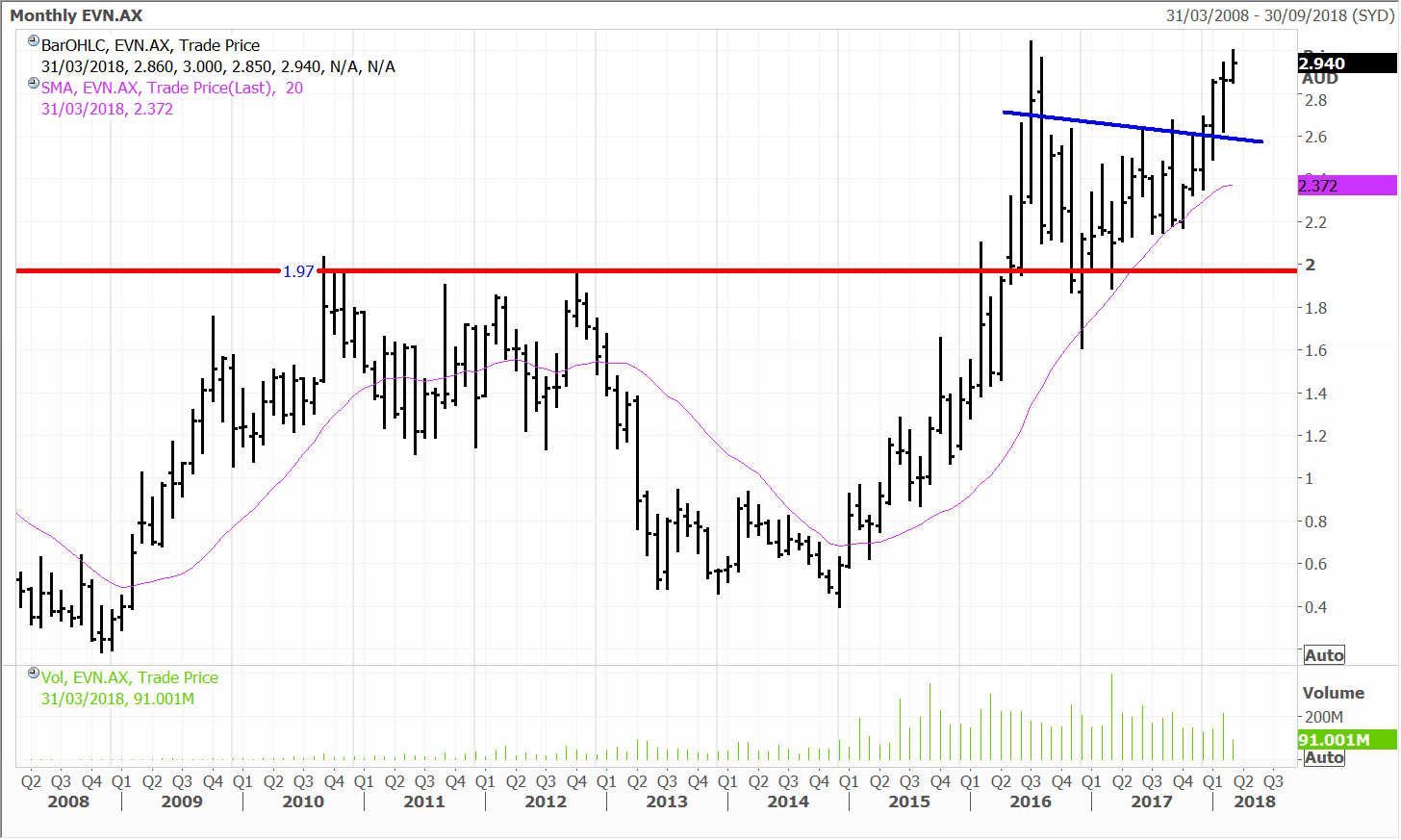