US indices shrugged off rhetoric from the White House and threats to enact tariffs on the aluminium and steel industry, to post a rebound on Monday, which followed Friday’s gains. At the close the S&P 500 was up 1.1%, while the Dow rose 1.4% and the Nasdaq up 1%. Most of the major sectors were showing decent gains but transportation stocks lagged over fears on the tariff introduction.

Treasury yields rose on the 10 year towards 2.89% as did the DXY, which pushed back above 90. The VIX declined nearly 5% to settle above 18. Commodities were little changed with the exception of WTI oil which jumped 2.2% on news of production disruption in Libya.

House Speaker Paul Ryan urged the President to reconsider the proposed tariffs on steel and aluminium. While Trump when asked about Paul Ryan’s comment said “he won’t back down on trade”, the real issue is what is he trying to achieve in the soon to be held negotiations with Mexico and Canada over North American Free Trade Agreement.

The market was galvanised by comments from hedge fund supremo Ray Dalio who came out on Monday and called the threat of a trade war a “political show”. I totally agree with Ray Dalio and have written in these notes this is all an act of negotiation.

However the markets late last week were initially driven by the initial shock but quickly recovered, while of course mainstream media went into overdrive on the weekend and again on Monday, fuelling fears throughout Asia and Europe and we are really only just beginning to see more balanced coverage this morning.

Stock markets staged a subdued recovery in Europe aside from Germany but were weaker again in Asia and Australia but I expect a better day today. President Donald Trump is clearly trying to increase pressure on Canada and Mexico ahead of next week’s talks by saying on Monday the two nations could avoid being “caught” with the tariffs on steel and aluminum if they ceded ground in talks on a new NAFTA trade deal. Trump said that Mexico needed to do more to stem the “flow illegal drugs” to the United States, which is something not encompassed by the talks over NAFTA.

Strong opposition within the Republican Party has already emerged, not to mention the lobbyists in Washington who have also gone into overdrive. Republican Kevin Brady, the top House legislator on trade, said “American consumers should not be forced to pay more for goods.”  The US auto industry for one would be hit very hard by the tariffs, raising the input costs of steel and aluminum significantly for US manufactured cars and trucks (not to mention planes).

As I wrote yesterday, this is all a negotiating tactic by the Trump Administration to secure more advantageous terms of trade, and to also act on his election promises. Trump said during a White House meeting on Monday with Israeli Prime Minister Benjamin Netanyahu. “We’re not backing down. I don’t think you’re going to have a trade war.” US Trade Representative Robert Lighthizer, Canada’s Foreign Minister Chrystia Freeland and Mexican Economy Minister Ildefonso Guajardo are scheduled to meet in Mexico City on Monday to wrap up the latest round of discussions on revamping the 1994 NAFTA deal.

A report from the Institute of Supply Management showed a slight slowing in the pace of growth in the service sector in the month of February, but the print was still strong and above forecast. The non-manufacturing index dipped to 59.5 in February, down from 59.9 in January. The forecast was for 59.0. The modest decline was partly due to slowing job growth in the service sector. A separate services sector PMI from HIS Markit rose to 55.9 in February, up from 53.3 in January.

US T bond yields moved higher on Monday, hitting 2.89% only 6 basis points away from the highs of a few weeks ago – see below. The 3% resistance level is widely followed by the market, and at some point the T Bond yield is going push above this mark. We have the influential non-farm payrolls report out later this week on Friday which could prove to be the catalyst if the data comes in stronger than expected.

Crude prices rose on Monday on supply concerns, forecasts for robust oil demand growth and fears that OPEC will not be able to increase its production capacity. Brent futures were up 2.1% at $65.70 a barrel, while West Texas Intermediate jumped 2.3% to $62.65. Oil ministers from OPEC and other major producers made “bullish comments” on Monday at the CERAWeek conference in Houston – which is the largest energy industry conference.

The conference discussed a number of issues including Venezuela’s deteriorating oil-production profile, together with prospects for strong compliance with the OPEC-led output-cut agreement. Suhail Mohamed Al Mazrouei, the United Arab Emirates oil minister and OPEC’s current president said on the weekend that the cartel had “not discussed rolling over production cuts next year. But we feel there is still market overhang.”

The International Energy Agency also advised on Monday that ‘it expects oil demand growth to average a fairly robust 1.1% a year to 2023 and noted that OPEC would fail to significantly increase its production capacity. “One thing hasn’t changed over the past year is that upstream investment shows little sign of recovering from its plunge in 2015-2016, which raises concerns about whether adequate supply will be available to offset natural field declines and meet robust demand growth after 2020.”

WTI has continued to rally after breaking out last year although the price has been checked recently in line with other commodities and stock markets since early February. I see this rally as having really only paused and that WTI will increase back to $76/$80 later this year, which bodes well for the energy sector.  We overweight major Asian and Australian energy producers in the Global Contrarian Fund with a strong tilt towards LNG.  Demand for LNG is going to soar in Asia, particualrly with China’s crackdown on pollution emissions.

In corporate movers, Bermuda-based insurer XL Group shares were soaring 29% after agreeing to be acquired by French insurance company AXA for $57.60 per share. This has implications for QBE Insurance, and I have written more on this below. Sparton Corp shares were tumbling 27% after its takeover by UK-listed Ultra Electronics was blocked on antitrust grounds.

Shares of online real estate portal Zillow Group were up 4.6%, while homebuilders D.R. Horton and Lennar recovered some ground, up 0.4% and 1.4% respectively. Stock of casino operator Wynn Resorts advanced 1.2% and entertainment giant Walt Disney rose 0.4%. More on that later.

The FTSE 100 drifted up 0.65% in Monday trading as sterling rose against the US dollar as Theresa May told Parliament officials were getting closer to a Brexit deal. Homebuilders rose after the UK Prime Minister called for a “great national effort” to address the lack of homes being built in the UK. In a speech setting out how she aimed to reverse the shortage the PM said she would “not rule any options.”

Turning to Asia, the benchmark Nikkei 225 index dipped 0.66% on Monday for a fourth day, sliding to levels not seen since mid-October 2017 as investors fretted about a global trade war heating up and the yen strengthened modestly. Given Japan’s significant exporting tilt, steelmakers, shipping companies and automakers felt the pressure. But still the significant 21,000 level on the Nikkei managed to hold and close at 21,042. The Nikkei futures are pointing to a 2%+ rise today

The Macau casino operators fell Monday, as investors took some more gains off the table after a strong run over the past year. Wynn Macau fell 3.0%, and both Sands China and MGM China were down 2.6% each. All three are held in the Global Contrarian Fund.

In Australia the market traded lower on Monday, with the ASX200 ending the session off 33 points at 5,895. Weakness was broad based although the market should have a better time of it today, with fears over a trade war subsiding during Northern Hemisphere trading.

As noted there was some M&A action overnight in the insurance sector, with AXA making a bid for XL Group for $15.3 billion. The deal will make AXA the top provider of commercial casualty coverage. AXA is paying $57.60 a share, a one-third premium compared with XL’s closing price on Friday. The deal has important implications for QBE Insurance, which we hold in the Global Contrarian Fund, as well as the Global Opportunities and Australian Concentrated managed account portfolios.

AXA itself is said to have previously run the rule over QBE, and with this deal it is clearly expecting the sector to stage a strong turnaround. Last year was the worst on record for the catastrophe insurance sector given an unprecedented series of large natural disasters, however as we have noted this has the effect of taking capacity out and driving up premiums. Investment income is also set to get a boost as the yield curve steepens.

We have seen a number of deals in the sector already this year, and AXA may have also rung another bell with the takeover of XL. With similar value drivers this has pricing implications for QBE in my view. 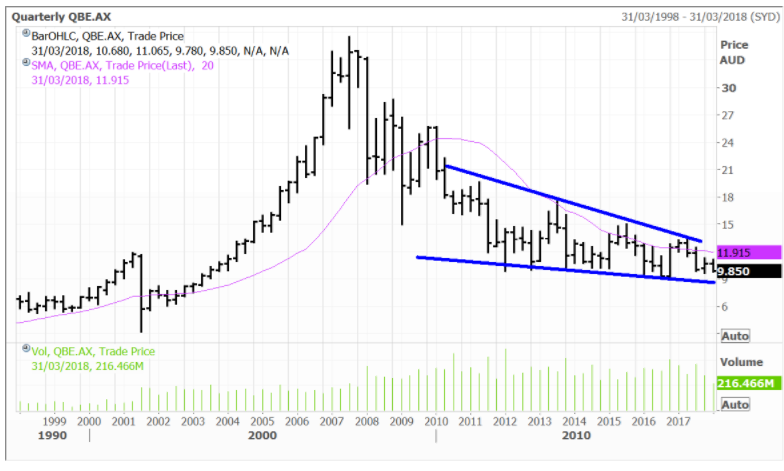 Meanwhile, Disney’s animated film, Coco, scored an Oscar for Best Animated Feature as expected. Coco is Pixar’s 19th feature film and its string of movies under Disney ownership have been steady earners at the box office, supplementing Disney’s strong internal studios. Of course, Disney also has Lucasfilm under its umbrella now and will be hoping to add some Fox franchises to the quiver should its acquisition be approved by regulators. The strong performance from its movie business, along with the thriving theme park segment has been staving off attrition at the ESPN sports business.

Disney has plans to being offering a new streaming service from ESPN soon (and a broader entertainment offering later) and just named long-time Disney executive James Pitaro as the boss of ESPN and co-chair of Disney Media Networks. He will report directly to CEO Bob Iger, who has said getting the direct-to-consumer streaming offerings right is one of his biggest priorities. Disney is held in the Global Contrarian Fund and Global and US managed account portfolios.