US stocks were mixed on Tuesday with initial gains over North Korea’s seeming capitulation and offer to return to the negotiating table being neutralised by trade war fears. Media reports surfaced during the day of the possibility of President Trump’s top economic advisor, Gary Cohn, tending his resignation if planned steel and aluminium tariffs are imposed by the White House. More supportive for the markets were cooling tensions on the Korean Peninsula, with North Korea saying it is now willing to hold denuclearization talks with South Korea.

The indices oscillated between green and red all day to finish with the Dow Jones, S&P500 and Nasdaq all in the positive, up 0.04%, 0.26% and 0.56% respectively. The VIX declined more than 4% to 18 on easing political tensions in Asia, while on the other hand the Dollar Index lost ground against the majors slipping 0.5% to 89.5. This saw a return of bids to the PGMs and gold and silver both climbed 1% and 1.75% respectively back up to two week highs (there is more on gold below).

We have always maintained the argument that the US and North Korea really had no military options that were politically tenable, and therefore no choice but to return to the negotiating table.  This scenario now seems to be playing out as deep economic sanctions begin to bite in NK. President Donald Trump said on Tuesday that “he saw possible progress in denuclearization efforts with North Korea” after South Korea said Pyongyang would be willing to meet with the United States and suspend nuclear tests while talks proceed.

The optimism was measured however with Trump writing on Twitter “possible progress being made in talks with North Korea. For the first time in many years, a serious effort is being made by all parties concerned. The World is watching and waiting! May be false hope, but the US, is ready to go hard in either direction!“

Always the negotiator, but there seemingly is a potential pathway through the current political quagmire although I acknowledge this is early days yet but NK has really few options other than to compromise and negotiate. Exactly the same argument can be made for the White House threats on tariffs.

The main focus of markets on Tuesday quickly returned to the Trump’s administrations threats to introduce tariffs, which prompted a rebuke from Europe where retaliatory measures were put forward on aluminium, footwear and cars. The market did steady however after one report emerged on Bloomberg quoting a close ally of President Donald Trump as saying “that Trump was open to changes to his proposed tariffs on steel and aluminium”.

This endorses what I wrote yesterday about the situation being more a negotiation and as Ray Dalio said “a political show” designed to achieve advantage in upcoming trade discussions with NAFTA and also the Chinese. Nine months ago the markets took every statement on face value. Now it seems to be more a case of “a grain of salt”. This explains why the US indices have not been down way more over the past several trading sessions – which would have been the case if an actual full blown trade war was looming. 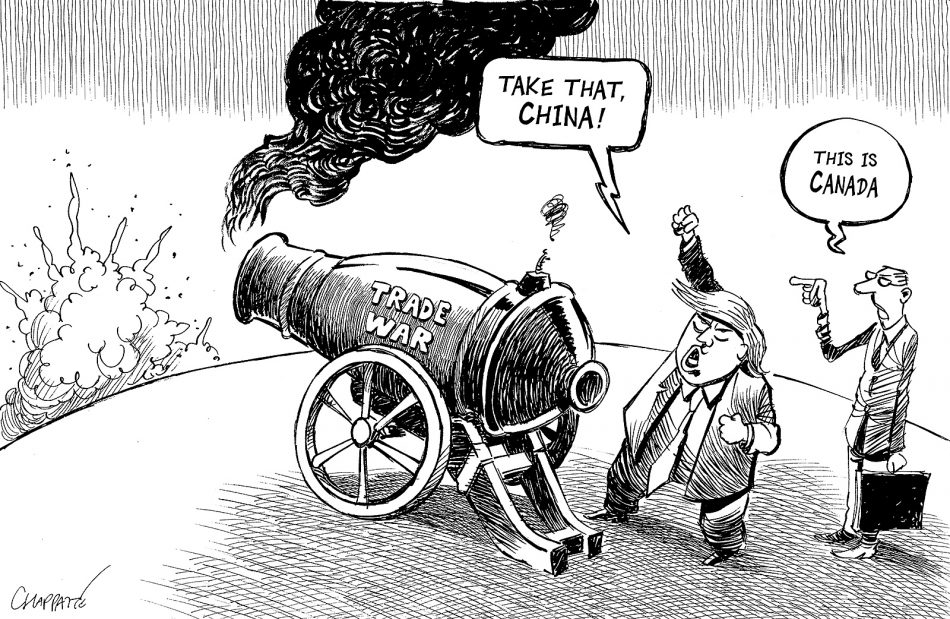 Trump may just be trying to appease the mid-west where he has a huge political base of support, and which he promised to do something about reversing the economic decline of ‘the rust belt’. This all I think reeks of political rhetoric and posturing. Just as the markets had to endure threats from Trump “to wipe North Korea off the planet” for a period, the reality was that the US was never going to start a nuclear war. I don’t see a global trade war either. Trump will be on his own there, and even he as a businessman knows the base case of what a tariff policy change would bring. While the markets tread water and take a neutral position (as evidenced by the indices closing near flat) ahead of a clearer lead from the White House, I think the volatility index said more in closing down 4.5% to 18.

Corporate opposition to the tariffs is mounting. Goldman Sachs delivered a comprehensive argument against the planned tariffs, saying they “risk damaging the world’s biggest economy by raising costs just as price pressures build, hurting allies more than others, and creating a two-tier global market. Import tariffs make the US less competitive by raising the prices of raw materials. By imposing across-the-board tariffs to all steel and aluminium imports, the larger economic impact is on Canada, Mexico and the EU, and it ironically eases the economic impact to China and Russia.” CEO of BHP Andrew Mackenzie also weighed into the fray saying on the ABC’s 730 report last night that Trump’s move was a “black day for the world.”

A report from the Commerce Department said new orders for manufactured goods weakened slightly more than expected in January, declining 1.4% after an upwardly-revised 1.8% rise in December. The forecast was for orders to dip 1.3% from the 1.7% increase previously reported for December. The pullback in factory orders was largely due to a significant decline in orders for durable goods, which fell 3.6% in January after being up 2.7% in December.

In terms of individual stock movers, the shares of precious metals miners Barrick Gold and Coeur Mining were up 2.35 and 3.3% respectively in early afternoon trading. Components maker TE Connectivity had advanced 0.8% and Apple glass supplier Corning was up 1.1%. Apple shares had ticked up 0.4% to near all-time highs. Shares of Chinese online search giant and AI (artificial intelligence) leader Baidu, were looking strong, gaining 1.7%.Barrick, Coeur, TE Connectivity, Corning and Apple are holdings in the managed account portfolios. Baidu and Coeur are held in the Global Contrarian Fund.

Gold pushed back above $1,330 with the retreat in the greenback. What has been highly encouraging about the price action is the succession of higher reaction lows since early 2017. Upward pressure is clearly building and with our outlook for rising inflation gaining credibility in the markets. I think it is only a matter of time this year before the significant “$1375” resistance level that extends back to 2013 – finally gives way on the upside. This would be the sounding gun for the next upward leg in the gold which could see the price carried back up to the record highs of $1,800.  Time will tell.

Asian stocks rallied on Tuesday as trade war fears faded, with Donald Trump facing mounting pressure from many to rethink the approach and China so far has refrained from retaliating. Japanese shares came back with a vengeance after a four-day losing streak. The Nikkei surged 1.8% as the yen weakened against the greenback (US$) and exporters gained. It was a quiet day on the economic data front in Japan.

Holding the line. The Nikkei pushed up off key support at 21,000 yesterday with sentiment also being boosted by the talks to be held between South and North Korea.

The Shanghai Composite closed 1.0% higher Tuesday as reports emerged that regulators are considering giving Chinese investors to offshore-listed technology companies through depositary receipts. Property companies and healthcare firms were some of the strongest performers on the mainland over the course of the day.

The Hang Seng index bounced back 2.1% in trading, with resources and financial among the largest gainers. Oil and gas major CNOOC surged 4.1%, while insurer Ping An gained 3.6%. Technology conglomerate Tencent Holdings bounced back 3.2% after some recent profit taking and remains up 106% over the past year. The performance of the Macau casino operators was mixed, with MGM China edging up just 0.2%, Sands China gaining 2.7% and Wynn Macau surging 3.4%.

It was risk on in Australia on Tuesday, with the ASX200 leaping 1.1% to close at 5,962. This broke a four-day losing streak, and it is possible that investors are coming to grips with the fact that Trump’s tariff plan will not descend into a global trade war, and does not have significant negative implications for Australia. The RBA predictably left rates on hold (for the nineteenth consecutive time if you are counting), and I didn’t see anything in their accompanying commentary which suggested that rates are going to move higher any time soon.

BHP remains in an upward channel. Near term consolidation is probably, but $28 should hold on the downside before another probable upward leg takes BHP to well north of $30. 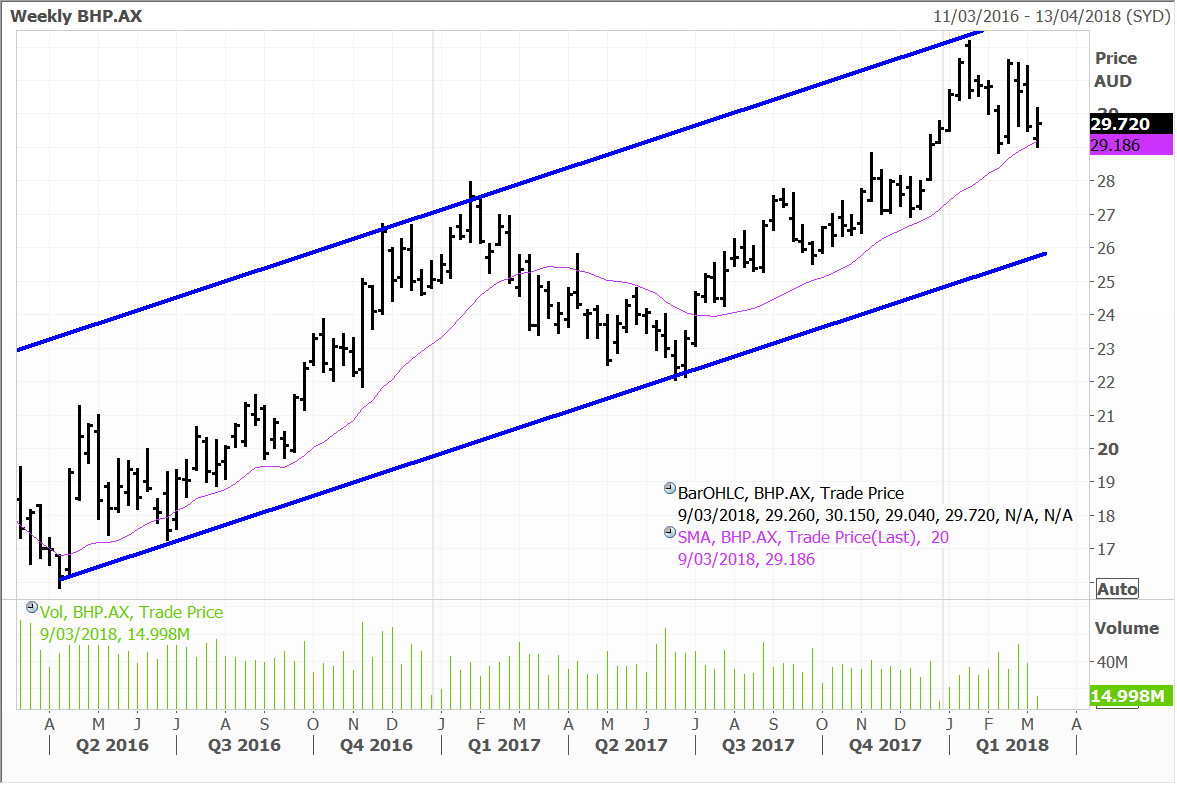 Many questioned S32 with numerous broker downgrades following the recent profit result. I think the reaction was overdone, but nevertheless, S32 tested and respected the upward trend. We anticipate a test of $4 and break through to new highs later in the year. 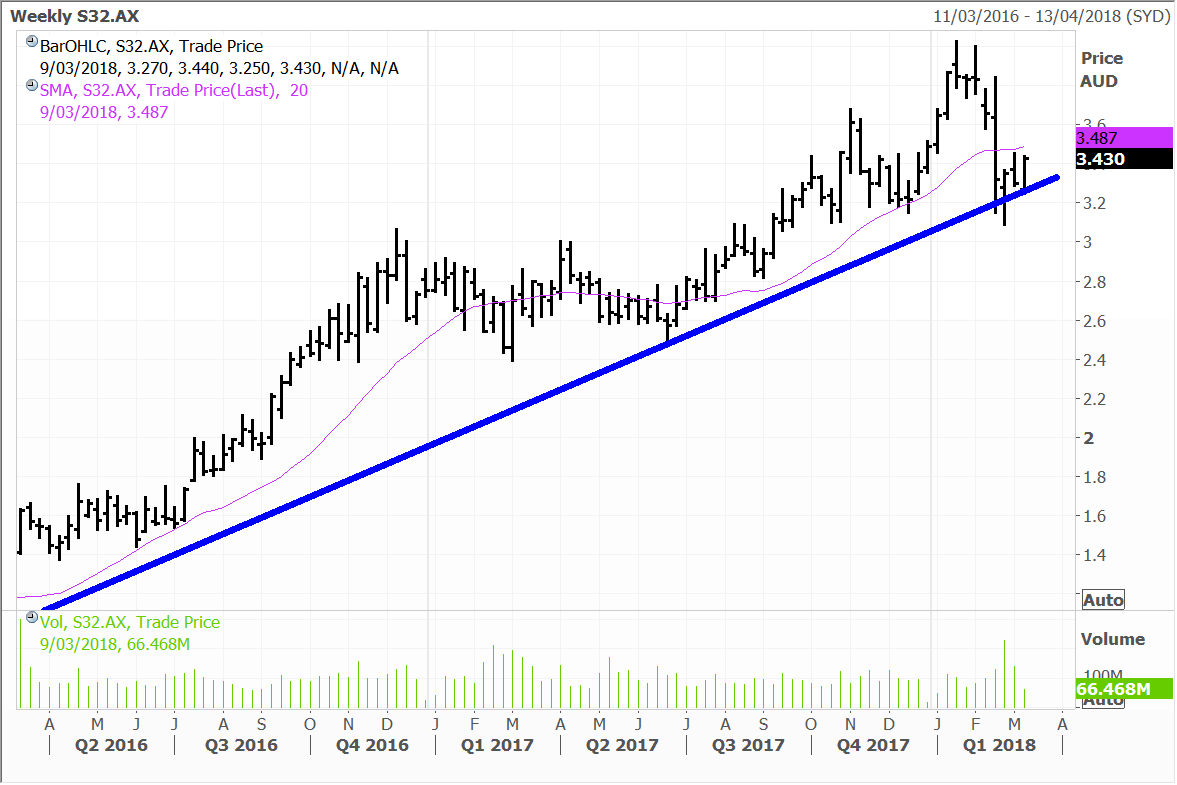 We remain overweight the resource sector, which will see another leg up in our view. We continue to favour the producers such as BHP and South32 which were up 2% and 4.4% respectively yesterday. We hold both stocks in the Global Contrarian Fund and the Australian and UK managed account portfolios.

The analyst team have also reiterated a high conviction buy on QBE yesterday. Premiums will likely see significant upward pressure due to 2017’s extreme catastrophe experience, and investment income should increase over the medium-term, due to our expectation for a rising yield curve. New CEO Pat Regan could also bring some positivity to the investment story, especially as it seems much ‘kitchen sinking’ has already been done. The Latin American operations have been sold for an adequate price.