After heavy pressure early in the day, the S&P 500 and Nasdaq staged a significant turnaround to close higher on Friday, while the Dow finished slightly in the red after roaring back to all but erase a drop that approached 400 points at its worst.

Fears over a trade war dominated the trading day, but support began to return as markets somewhat discounted the comments as Trump posturing and readying for negotiations. While Trump may be many things, he is competent at the “art of negotiation’. I don’t see him as being antibusiness, but rather a tough negotiator (which the US has lacked for some time in a President) and where he will look to negotiate a more competitive position for US business.

Placing the US economy on an uncertain footing would be incongruent for a President that literally sees the S&P500 as his scorecard. Futures indices on Friday point to a better session today. We already have precedent of Trump’s negotiating style with North Korea. Initially markets reacted badly last year as the dialogue with North Korea deteriorated and prospective war tensions were priced in, but as time went by those tensions defused – and markets rallied – as it became clear that both sides were willing to negotiate with the military option being untenable. I see the same situation dynamics emerging from the White House over the tariffs.

The world, including American business, would be unanimous in holding the view that protectionism leading to a trade war would be bad for the global economy. I therefore think that Trump is positioning to negotiate and it will be interesting to see what the real objectives of the White House administration are when they emerge over coming weeks. One objective I don’t see is being a full-blown trade war, and markets probably came to that conclusion on Friday with the sharp turnaround intraday in the indices. 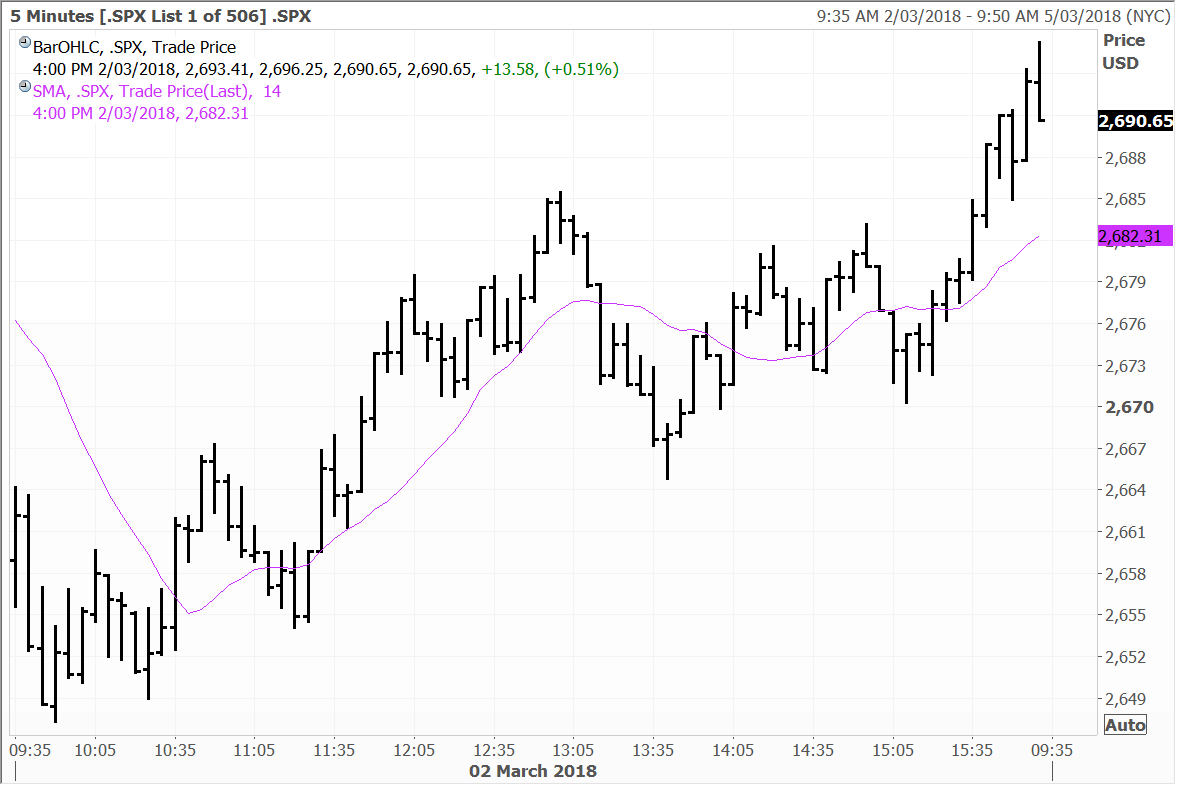 The S&P closed up 0.51% while the tech heavy Nasdaq advanced 1.01% and the Dow slipped 0.29%, with a 4.8% slump in McDonald’s following a broker downgrade weighing on the index. All major indices moved lower over the week, with the Nasdaq down around 1%, the S&P 2% lower and the Dow slipping 3%.

The initial pressure on stocks early Friday emerged following Donald Trump’s plans to impose a 25% tariff on steel imports and a 10% tariff on aluminium imports. While the tariffs are likely to benefit local steel and aluminium producer’s short term, the sectors affected represent 1% of the US economy. While the risk of a trade war has increased with Europe and Asia posturing, Trump’s comments – as always – need to be held in context.

Video game developers were also faring well, with Activision Blizzard shares up 2.8% (more on that later) and Take-Two Interactive rising 3%. Technology stocks generally ticked up, with Google parent Alphabet advancing 1.2%, Apple up 0.7% and Baidu edging up 0.3%. Baidu is held in the Global Contrarian Fund, while Alphabet, Apple and Activision Blizzard are holdings in the managed account portfolios.

Elsewhere, the European stocks sank for a fourth day of losses, while Germany’s DAX Index reached its lowest level since August. European stocks extended their losing streak to four days Friday as investors worried about a trade war after Donald Trump’s plans to impose the new tariffs. The news hit European steel producers like Salzgitter (-5.2%), ThyssenKrupp (-4.1%) and ArcelorMittal (-3.7%). The pan-European Stoxx 600 fell 2.1% for the day, while the Euro Stoxx 50 index of eurozone blue-chip stocks slipped 2.2%.

In Germany, Infineon Technologies declined 2% despite announcing a joint venture with China-based automaker SAIC Motors to make power modules for the electric vehicle market in China. In Paris trading, Total SA fell 2% after acquiring Marathon Oil Libya, which owns a 16.3% stake in the Waha Concessions in Libya. Cement giant LafargeHolcim tumbled 7.5% in Swiss trading after posting a fourth quarter loss of 3.1 billion Swiss francs after taking an impairment charge. Peer Heidelberg Cement, which we hold in the Global Contrarian fund, was down 3.0% on the day.

Banking shares across the region fell, with Credit Agricole, BNP Paribas, Caixabank and Credit Suisse shares down between 2.3% to 3.6%. We hold all in the managed account portfolios.

Japan led the retreat in Asia with the Topix Index tumbling after Bank of Japan Governor Haruhiko Kuroda  mentioned a possible timeframe for discussing an exit from quantitative easing. The yen surged to 106, the strongest level against the US dollar since 2016.  The Nikkei slid 2.50% as steel and aluminium companies tumbled and exporters were dragged down by a stronger yen. The auto sector took the brunt of the falls with Honda Motor falling 3.9%, Toyota Motor down 2.6%, Subaru down 2.7% and Nissan Motor and Mazda declining 1.6% and 3% respectively.

Among Japanese stocks, exporters such as robotics leaders Fanuc and Yaskawa slid 2.2% and 2.6% respectively, while Sony held up a little better, dipping just 1.2%. The latter company continues to see good news flow for its thriving PlayStation business.

The banks also held up better than the broader market as prospects of higher inflation and an exit from ultra-accommodative monetary policy, support the investment case. Mitsubishi UFJ, Mizuho and Sumitomo notably incurred milder falls between 0.6% and 1.3% as the banking sector generally outperformed on the day. Fanuc, Sony, Mitsubishi UFJ, Mizuho and Sumitomo are held in the Global Contrarian Fund. Yaskawa is held in the Asian managed account portfolios.

The Shanghai Composite edged down 0.59% Friday, with investors waiting on the upcoming meeting of the National People’s Congress set to start this week in Beijing. The gathering will set the tone for the year’s development plans. The Hang Seng slipped 1.48% with steel and aluminium stocks some of the most heavily sold on the day. Angang steel fell 2.3% and Maanshan Iron tumbled 4.8%. Oil and gas major CNOOC slipped 1.4%.

Investors took some profits on the Macau casino operators Hong Kong listed shares. Wynn Macau fell 2.2%, but remains up 86% over the past 12 months. MGM China edged down 0.6% and Sands China by 1.0%, but both are also strongly in positive territory over the last year. CNOOC, Wynn Macau, MGM China and Sands China are held in the Global Contrarian Fund.

In Australia the market closed lower on Friday, with the ASX200 ending the session off 44 points at 5,928. For the week the index was down 1.2% with angst over the prospect of a global trade war following Trump’s tariff plan. All sectors were in the red on Friday, but the gold stocks, with the sub-index rising 1%. Saracen Minerals was one of the brightest shiners, up 2.4% – we hold the stock in the Concentrated Australian shares managed account portfolio.