Wall Street bounced on Monday as the recovery got underway with the major indices all putting in convincing gains, and with bond yields remaining steady (ahead of Wednesday’s CPI data print). Volatility is also subsiding after the biggest spike in more than two years. The Dow Jones, S&P500, and Nasdaq rose from the opening bell to close up 1.7%, 1.4% and 1.6% respectively.

Leading the market higher was the S&P500 Materials sector which rallied more than 2.5% after President Donald Trump unveiled his second budget which included a proposal for fiscal 2019 for $200 billion on infrastructure spending, more than $23 billion for border security and immigration enforcement, as well as $716 billion on military programs.

We hold names such as Heidelberg Cement, Lennar and James Hardie which will all be beneficiaries of the infrastructure rollout in the US. Last week’s correction was revealing in that the S&P Materials Index came under relatively less pressure than the broader market – see below. 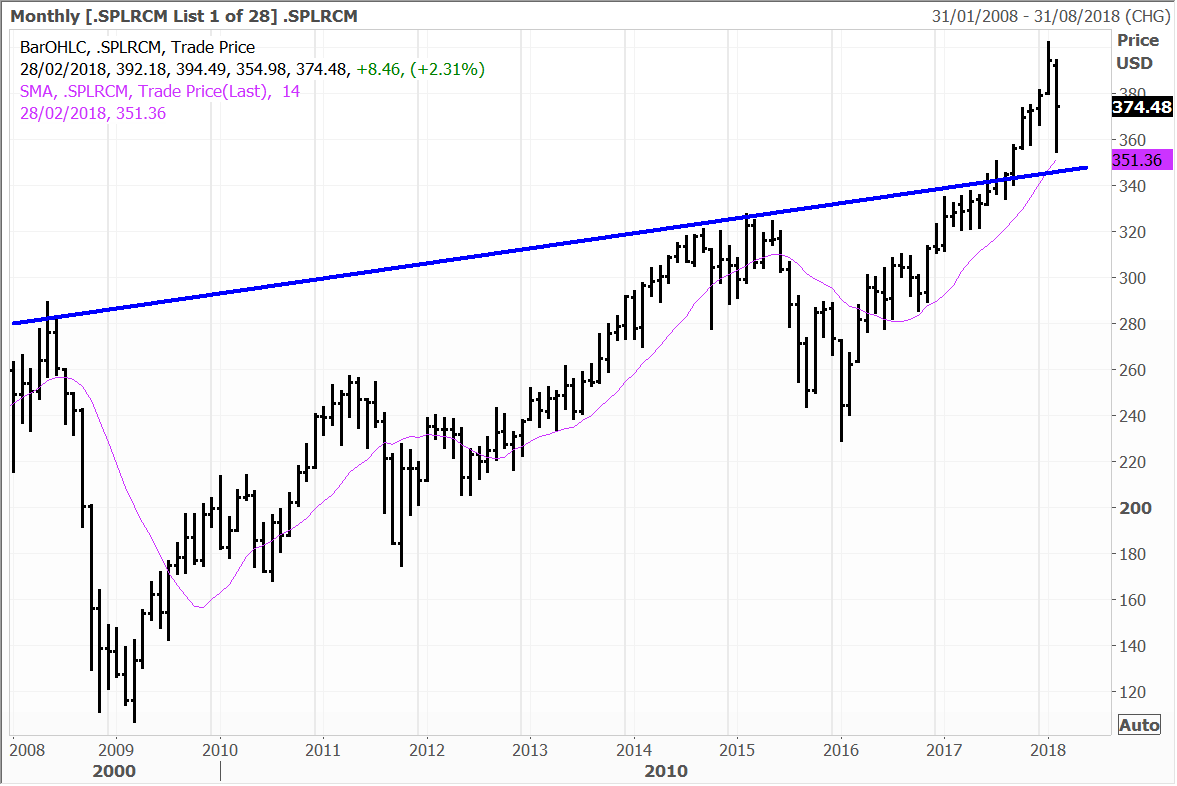 Elsewhere in the markets, the US T Bond 10-year yield made a new four-year high above 2.90% but slipped back towards 2.86% into the close, while the VIX declined back to 25. Commodities were stronger across the board with copper leading the way with a 1.8% bounce.

Trading activity was relatively quiet throughout the session however, without much in the way of economic news. All eyes are on the producer and consumer price data which is due out tomorrow and will likely be the catalyst for more activity. Vol levels will no doubt remain elevated until well after the CPI data print on Wednesday.

Trump’s the new $4 trillion budget is a spending spree that has the national deficit moving sharply higher over time and includes a pay raise for troops and billions to build a border wall. Over the next decade tax revenues are projected to slump by $3.7 trillion and accumulate deficits of $7.2 trillion which will place upward pressure on rates. The last plan forecast a project 10-year shortfall of $3.2 trillion. Precious metal producers were all up on the news.

The defence contractor General Dynamics said it will buy a smaller rival for approximately $6.8 billion, sending shares of the smaller firm up by a third in trading. American Express and Cisco shares were up about 3% each after getting a broker upgrade to buy. Apple and Baidu shares were staging a strong rebound after last week’s sell-off and were up 4% and 2.8% respectively. Baidu is held in the Global Contrarian Fund, while Apple shares are held in the Global Opportunities Managed Account portfolios. Both Cisco and Apple are held in the North America Managed Account portfolios.

The cartel expects non-OPEC production to grow by 1.4 million barrels per day, up some 250,000 barrels from its earlier estimate. US supply growth is responsible for much of the increase. WTI crude has now retraced around 40% of the advance that ensued after the breakout in October last year. 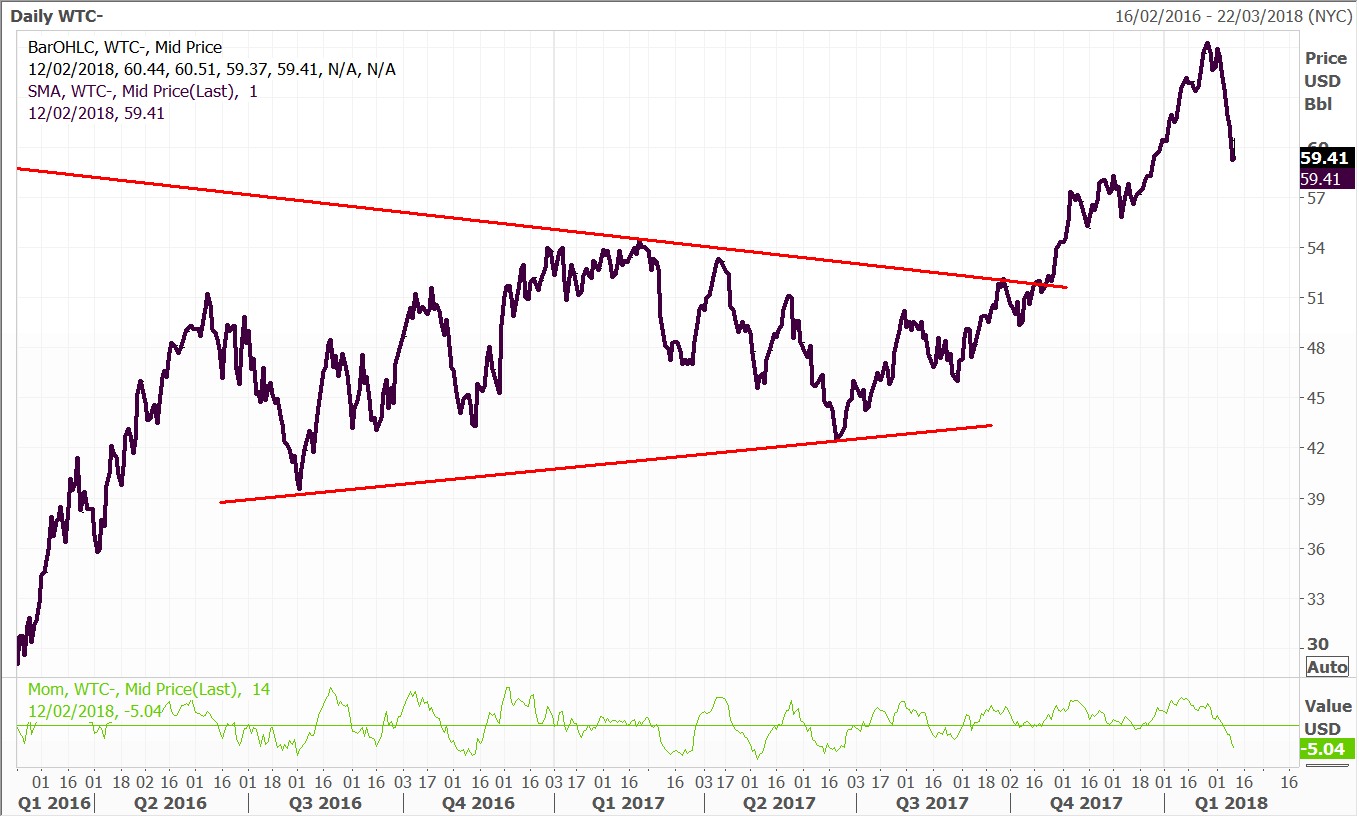 European shares had a positive start to the week, following on from Wall Street’s gains on Friday and rising commodity prices. The pan-European Stoxx 600 advanced 1.17% for the day, while the Stoxx Europe 50 – which contains many blue-chip stocks – was up 1.28%.

LVMH, the world’s biggest luxury goods retailer had a strong day, with its shares surging 4.0% in Milan. The company reported strong results recently, showing in a rebound of demand from Chinese consumers. Spanish-listed Telepizza also put in a strong showing, gaining 3.0%. Caixabank and Bankia also made modest gains on the Spanish bourse.  Heidelberg Cement AG shares were up 2.0% in Germany. 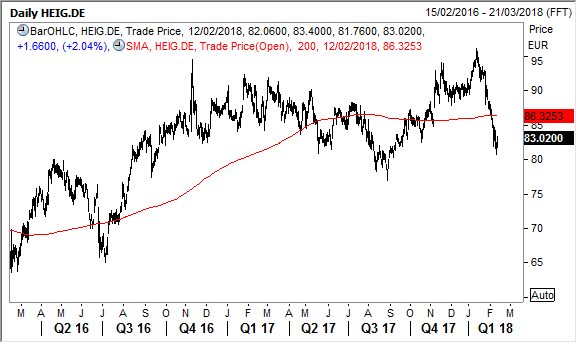 In Hong Kong, the Macau casino operators gained. Sands China was the relative lagged, up just 0.2% on the day, while Wynn Macau gained 0.4% and MGM China notched up a solid 2.6% gain before holding the ‘grand opening’ for its MGM Cotai property today. Sands, MGM and Wynn are held in the Global Contrarian Fund, the Global Opportunities and Asian Managed Account portfolios. 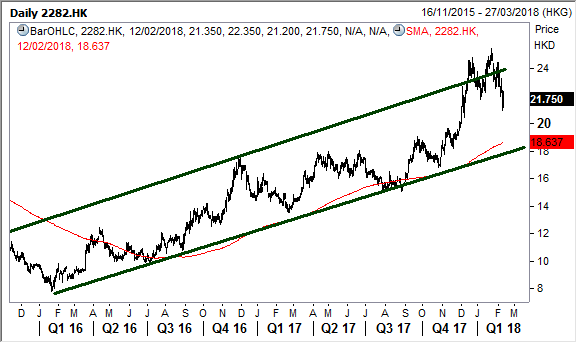 The new casino is the second in Macau for MGM China and its first on the Cotai Strip. The HK$27 billion (US$3.4b) property is the newest in a long line of new casinos that has opened in the area over the past few years, transforming Macau into a world-class tourist destination for the mass market. The model has been encouraged by Chinese authorities, seeking to replicate the gentrification of Las Vegas.

Meanwhile the infrastructure buildout in Macau continues, with the extension of the north part of the Macau airport reportedly beginning operation yesterday just before Chinese New Year.

Hong Kong-listed shares of oil and gas major CNOOC slipped 2.1% in trading, despite oil prices firming a little after six days of declines. CNOOC is held in the Global Contrarian Fund.  South Korean stocks clawed back some of the losses from last week, with the benchmark KOSPI up 0.9%., gained 2.3%.

In Australia the market got the week off to a soft start with the ASX200 dipping 17 points to 5820. Most sectors were in the red, although resource stocks notably bucked the trend and were higher as commodity prices strengthened. South32 paced the gains in the sector with a 2.7% rise. The diversified miner is one we favour, and we hold the stock in the Concentrated Australian, UK Share, and Mining and Resources Managed Account portfolios. Miners had a good day, with Rio Tinto up 2.8% and BHP Billiton gaining 1.9%. 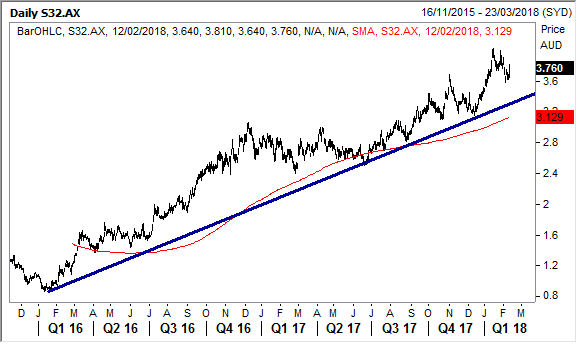 Aside from the banks we also like the financial service platform companies, and there has been some weakness here over the past week. Praemium was down 4% yesterday, but has had a strong run in recent months. If we are right that markets are bottoming, then the stock is good value around current levels. A commitment to innovation remains a key part of the company’s success in Australia, while the UK business is also strategically well positioned. We hold Praemium in the Concentrated Australian Share and Small/Mid-Cap Managed account portfolios.