The big news in the US on Wednesday impacting markets was the resignation of White House chief economic advisor Gary Cohn. The former head of Goldman Sachs is a close advisor of Donald Trump, and is described by some observers as the only “grown-up” in the room.

The resignation came hard on the heels of President Donald Trump’s proposed plans to impose tariffs on steel and aluminium, as well as making trade threats to China. This totally overshadowed the cooling tensions on the Korean Peninsula, with North Korea having said it is willing to hold denuclearization talks.

The US indices came under immediate pressure after Mr Cohn resigned around market concerns what this would mean for US trade policies. Mr Cohn was a staunch supporter of free trade, and obviously there was a clash between him and the President which led to his resignation. Media reports surfaced on Wednesday that Trump wants to make a formal trade announcement later today but there are a lot of issues to be resolved including as to whether any countries will be exempted and when the tariffs will go into effect and for how long.

However despite all the negative news, sentiment began turning around with buying coming back into the US market towards the end of the session after candidate Peter Navarro was turned down by the White House as a replacement for Mr Cohn. Mr Navarro is a staunch advocate of implementing harsh tariffs and defensive trade policies.

Is Trump bluffing or playing a deadly serious game of Chicken run? We will soon find out but the market today began pricing in the possibility of blind man’s bluff.

I still think there is a very good prospect that Trump is playing ‘blind man’s bluff’ and posturing and positioning ahead of NAFTA negotiations to be held next week. He desperately wants to win some trade concessions, and just maybe the tariffs are an empty threat.

What is totally incongruent and a complete dichotomy of Trump’s current stance is that he has always seen the stock market as a key “barometer of his success while in office”. I could be totally wrong but I think this will turn out to be more a game of “blind man’s bluff” than chicken, and that is why the markets have not reacted more severely.

Despite all the “noise” the US indices rallied hard into the close after an initial rally and then a heavy selloff in the morning session. The Dow Jones closed down 0.33%, the S&P500 virtually flat and the Nasdaq in positive territory up 0.3%. The midcap Russell 2000 index closed 0.8% higher. Despite the roller coaster ride on Wednesday (at one point the Dow Futures were down more than 1.5%) the VIX lost nearly 3% to close at 17.8. 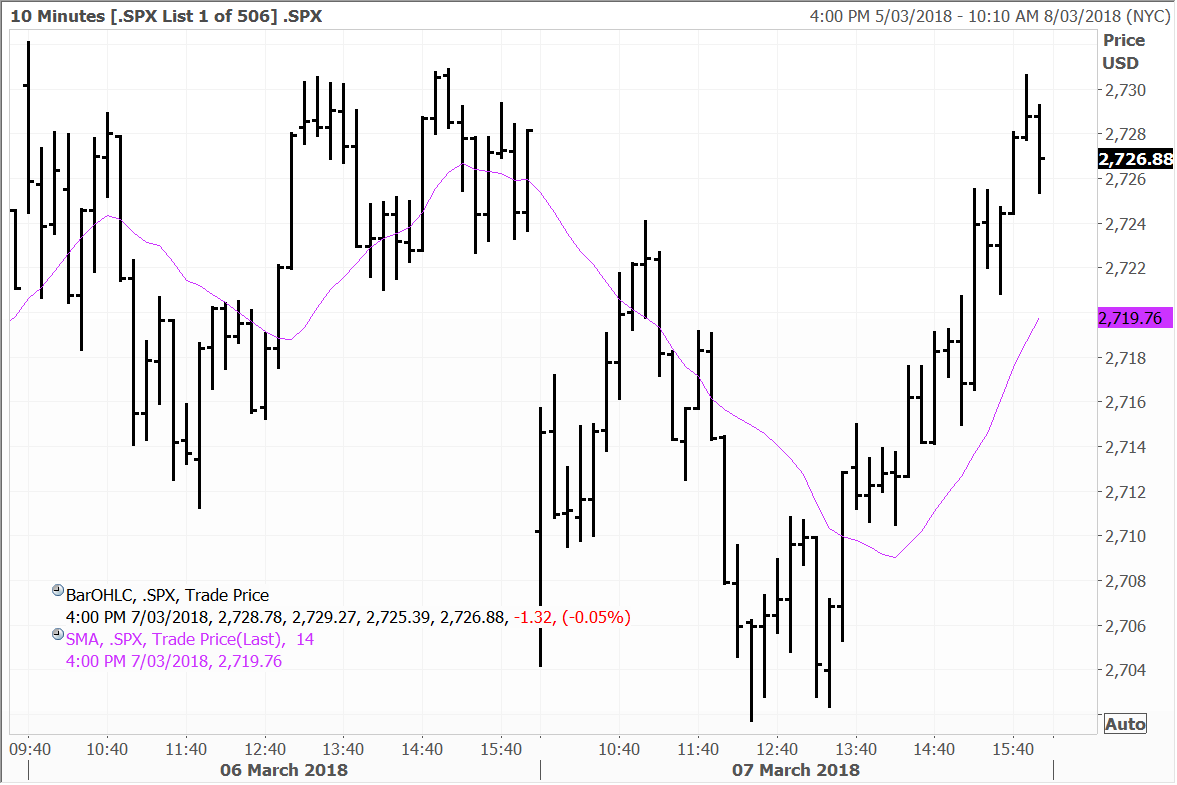 According to a Reuters survey of economists, nonfarm payrolls probably increased by 200,000 jobs last month, matching January’s gains. The unemployment rate is forecast falling one-tenth of a percentage point to 4.0%, which would be the lowest level since December 2000.

This points to a potentially stronger nonfarm payrolls number on Friday which the bond market will be closely watching. Markets will be bracing for another strong number that pushed the 10 Year T Bond yield sharply higher, and so the concerns tomorrow will be of a replay. However, with record short positions in bond futures, the fixed income market is heavily skewed in one direction. Friday could prove to be a case of “selling the rumour and buying the fact” if the payrolls data comes in less than expected.

The shares of precious metals miners Barrick Gold and Coeur Mining gave back some of the gains from yesterday, closing down 1.1% and 1.2% respectively. Barrick and Coeur are holdings in the managed account portfolios.

European stocks were choppy in trading Wednesday on the Gary Cohn news. Consequently, the renewed concerns of the potential for a trade war overshadowed the cooling of tensions in Korea. Still, the pan-European Stoxx 600 ticked up 0.36% for the day, while the Euro Stoxx 50 index of eurozone blue-chip stocks rose 0.61%.

Spain-listed Telepizza shares continued their recent solid run, rising 2.2%, while the Spanish banks Bankia and Caixabank were up 0.9% and 0.4% respectively. In Paris, food giant Danone rose 1.0% and pan-European stock exchange operator Euronext advanced 1.9% – more on Euronext later. In Germany, Heidelberg Cement added 0.8%. Bankia, Telepizza and Caixabank are held in the Global Contrarian Fund, while Telepizza, Danone, Euronext and Heidelberg are holdings in the managed account portfolios.

Asian stocks gave up early gains to finish lower Wednesday as trade war fears came back to the fore after the resignation of Gary Cohn and eclipsed the easing of geopolitical concerns on the Korean Peninsula. The relief rally in Nikkei the day before was short lived and it fell back into negative territory to the tune of 0.77%, with steelmakers dragging on the index. Kobe Steel tumbled 7.4%, Japan Steel Works slid 2.4% and Nippon Steel fell 2.2%. Our managed account portfolios have no exposure to these stocks.

Exporters were mixed, with robotics leaders Fanuc and Yaskawa Electric down 1.8% and 3.5% respectively. Truck maker Hino Motors held up well, edging down just 0.15%, while Sony advanced 0.6% in trading. Video game developer Square Enix tacked on 0.4%. Trading in the big banks like Mitsubishi UFG, Mizuho and Sumitomo was subdued with modest losses.

The Shanghai Composite closed 0.55% lower Wednesday, while the Hang Seng index fell 1.03%. Energy shares were some of the biggest losers in Hong Kong and shares of oil and gas major CNOOC slipped 2.1%. Social networking giant Tencent Holdings dipped 1.0% and the Macau casino operators all lost some ground on profit taking. Wynn Macau and MGM China both fell around 2.0% and Sands China was down 1.3%. CNOOC, MGM, Sands and Wynn Macau are held in the Global Contrarian Fund. Tencent is a holding in the managed account portfolios.

In Australia the market gave back most of the previous session’s gains on Wednesday, with the ASX200 closing 1% lower at 5,902. Sentiment was undermined by resignation of Cohn, as well as fourth quarter GDP numbers which came in softer than expected. If anything, the weak print will only strengthen the RBA’s resolve to sit still on tightening.

All sectors were in the red on Wednesday, with the notable exception being gold stocks, with the sub-index up 1.5%. We retain the view that the key driver of precious metals will be the onset of inflation, and we continue to favour the likes of Evolution which was up 1.4% yesterday. 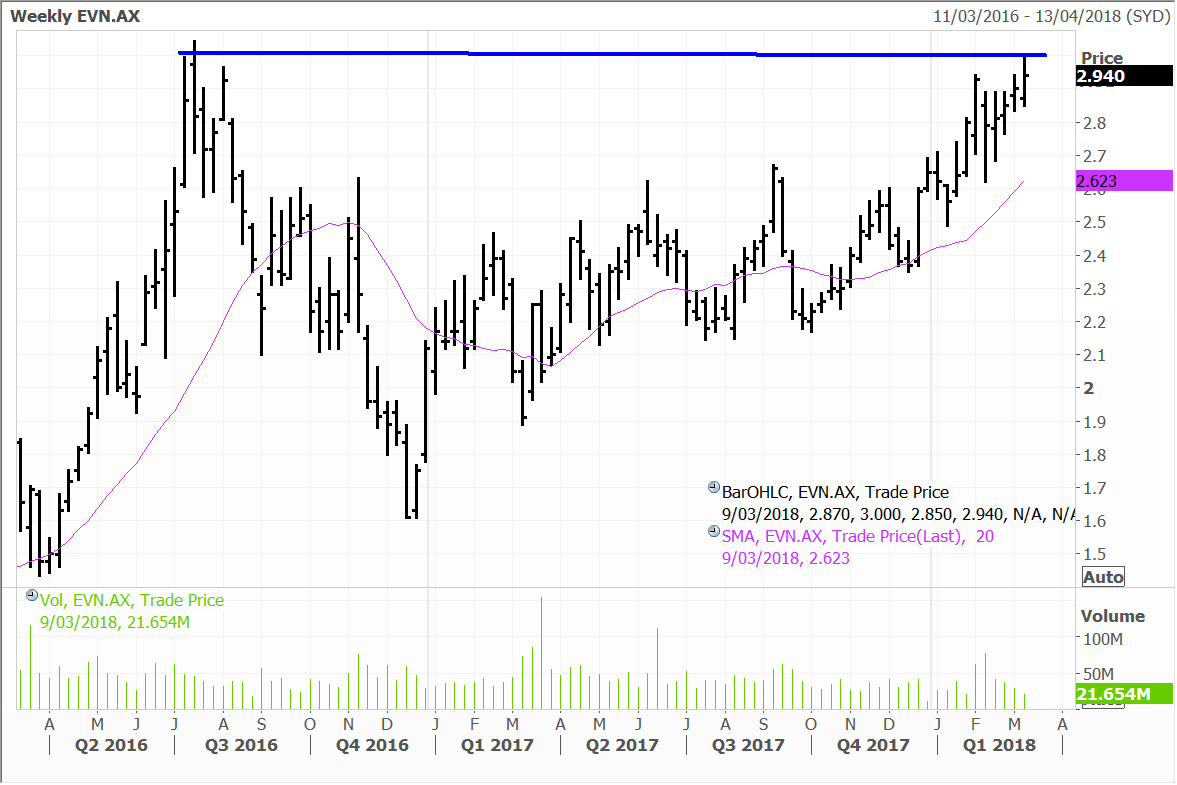 BHP was also covered in the webinar yesterday. We see the producer as a strong play on the next upward leg in the resources pricing cycle, while company specific drivers are also at hand. Included here is the divestment of the company’s shale operations, and BHP petroleum president Steve Pastor confirmed yesterday that “two dozen” potential bidders had been signed off to enter the data room for the dry gas assets in Fayetteville, Arkansas. He also expects the turnout to “more than double” for the oil-rich shales in Texas, the Permian and Eagle Ford. I expect the prayers will be answered and this should be a hotly contested auction! 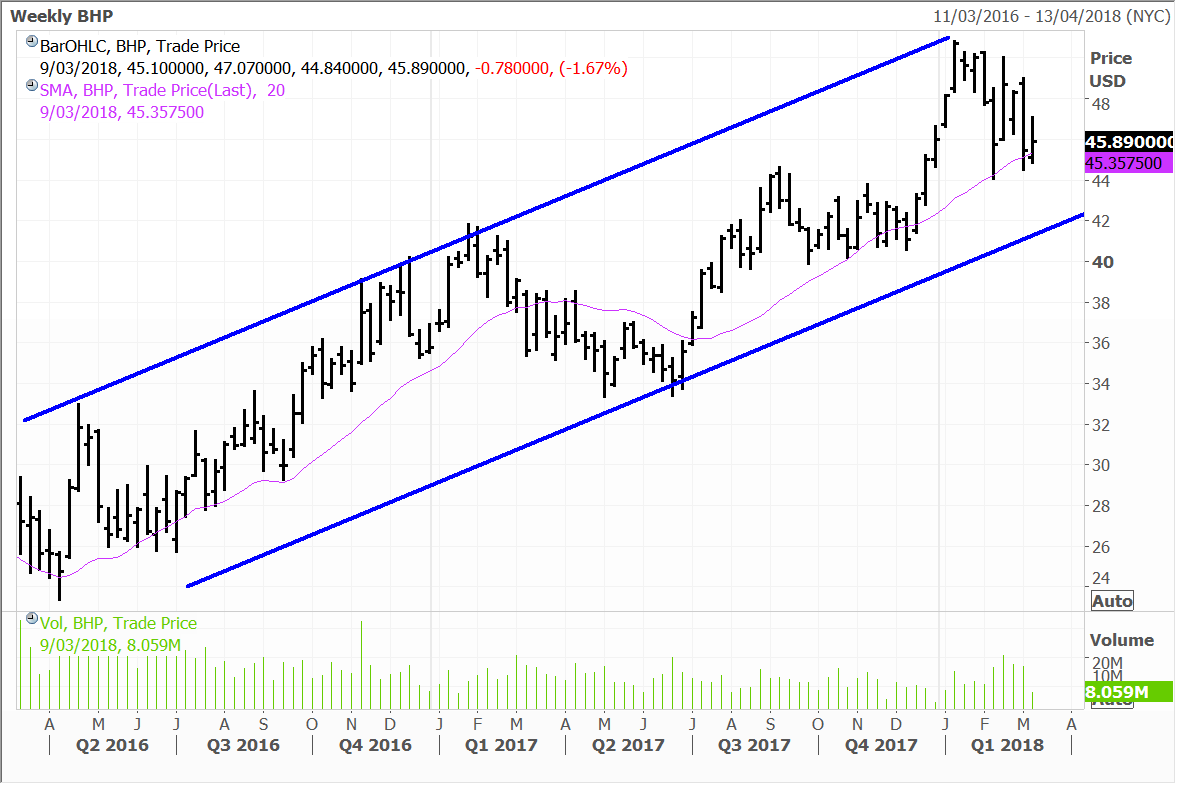