10-year Treasury yields have continued to rise hitting 2.74% – which is the highest level since April 2014 – after comments from the European Central Bank added to expectations that central banks globally will reduce stimulus as the economic outlook improves. The bond market is preparing for the Federal Reserve FOMC meeting which concludes later today. I expect the next rate hike to be on track and no major change from the rhetoric we have seen to date as Janet Yellen prepares to hand over the reins to Jerome Powell.

Fears over rising bond yields also took a heavy toll on equity markets, with the Dow Jones falling by 316 points to 26,122, after being down 411 points intraday. The S&P500 and Nasdaq were off 1% and 0.7% respectively. I have talked about the correction that has been long overdue, and it remains to be seen whether this is the onset. The markets though have been running hard for some time, and are in need of a corrective pause.

Fears over rising bond yields and runaway inflation may, for those that are old enough, bring back memories of 1987, and the sharp correction that played out. Certainly US valuations are as elevated now as they were then, but a key circuit breaker that exists is the greater global co-ordination of central banks who are able to not just control the short end of the curve, but also pull other monetary and fiscal levers, conveying similar measures to calm the markets. If central banks can spook the markets, they can just as easily provide reassurance. 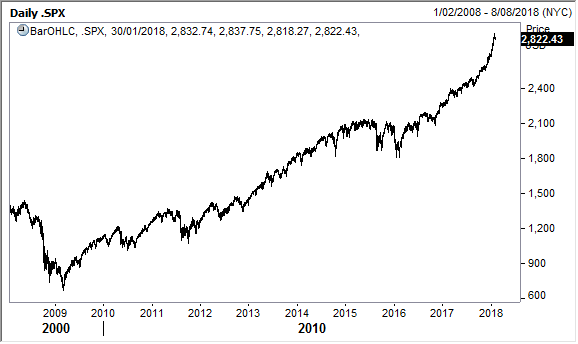 I think that the world’s central bankers will step in should market volatility get too far out of hand. However, some hot air coming out of the equity markets would no doubt be welcomed. I remain of the view that the correction, once confirmed, will not be heavy, and certainly not in the order of 20% as some are proposing. With the global economy continuing to improve, corporate earnings (and balance sheets) are in good shape, with less leverage in the system than prior to the GFC, and central banks at the ready, I would expect to see the inevitable correction to be in the magnitude of 5-10%. This would also be a buying opportunity in my view.

An economic recovery in France has helped the Eurozone report its strongest growth in a decade and outdo the US last year. According to a ‘flash’ report from the EU’s statistics agency, GDP in the Eurozone was 2.5% higher year-on-year in 2017 – the fastest growth rate since 2007. The result was reportedly given a helping hand by a turnaround in French economic activity, previously one of the region’s laggards.

The French economy hardly sprinted in 2017, recording 1.9% growth, but it was the best result from the economy since 2011 and this has generally been attributed to Emmanuel Macron’s early steps to cut red tape and taxes. More overhauls are in the works.

Growth in Spain cooled slightly, from 3.3% in 2016 to 3.1% in 2017. Still the Spanish economy has done well in recent years and as the fourth largest economy in the Eurozone has been an important contributor. We continue to have strong exposure to the region through our holdings in the likes of Bankia and Telepizza.

Wynn Macau lost 5% on Tuesday – which was half of what Wynn Resorts lost (-10%), and I think this points to the fact that market is more confident that the fallout will be less in Macau. Further, the fundamentals and data sets and comps coming through for Macau have beaten every investment bank and brokers forecasts in recent quarters.

What we saw on Monday and Tuesday were a number of brokers adhering to “overweight” recommendations but also hedging by preferencing MGM China and Sands China over Wynn Macau. We own significant positions in all three in the Global Contrarian Fund.

Whilst there is some risk with Steve Wynn remaining at the company, I don’t believe there is risk to the license regardless of the outcome of the allegations (which Wynn denies). Gross gaming revenues in Macau continue to climb and we are seeing the transition of gaming revenue from VIP to mass market gather momentum.

Rising discretionary income in China is spreading from the major cities to the smaller, and this will underpin a surge in consumer spending on travel, entertainment and recreation. Macau is going to go from strength to strength in my view over the next decade, and it will be this trend that underpins all the Macau gaming companies. I also expect a number of broker upgrades on Wynn Resorts and possibly Wynn Macau to ensue shortly in the face of further price weakness. Notably, shares of Wynn Resorts stabilised overnight in the US, with some buying in a down market.

Wynn Macau is correcting in the face of four-year highs. Whilst we are now likely to see the stock enter a consolidation range, the upward advance in Wynn Macau (and the sector) is far from over in my view 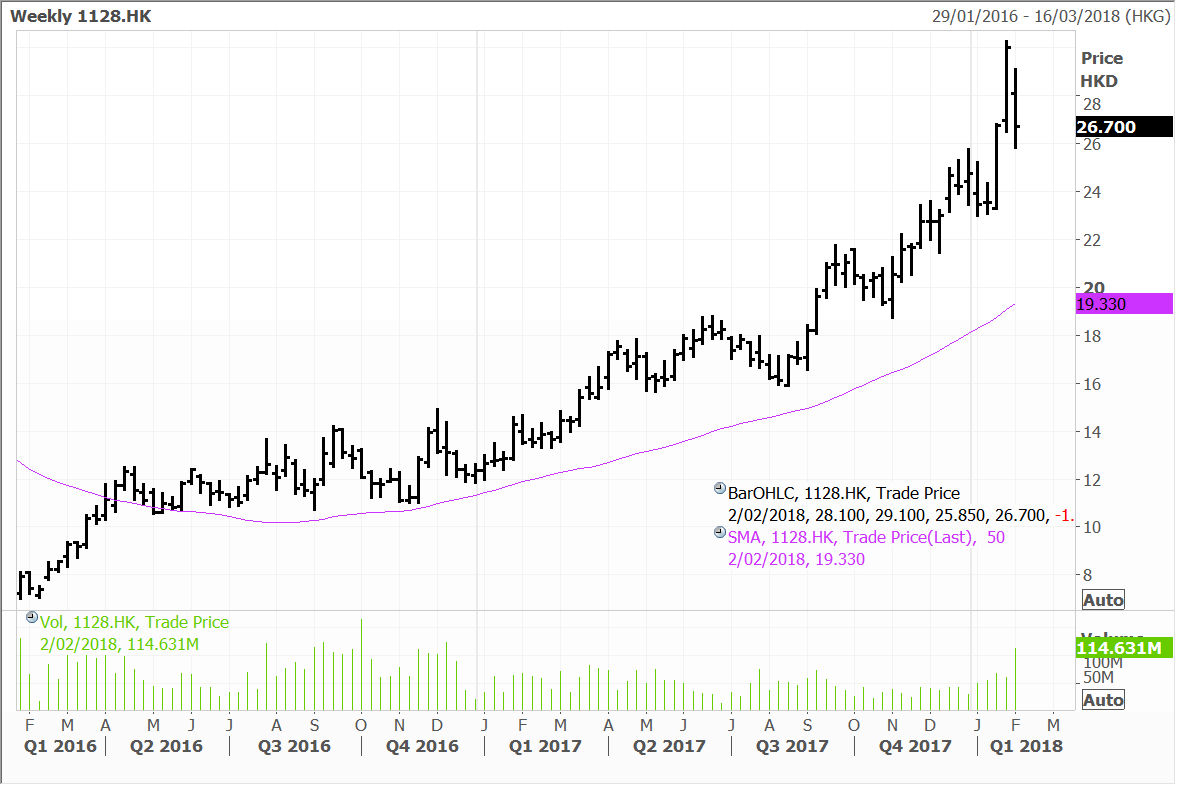 The ASX200 also has yield support going for it which should mitigate downside. The Australian market remains one of the highest yielding globally, at around 5.7%, I therefore believe that these attributes will mitigate the downside in Australia if we are to see a global correction play out. The forthcoming earnings season here should also confirm a solid trading environment, and particularly for the resource sector. 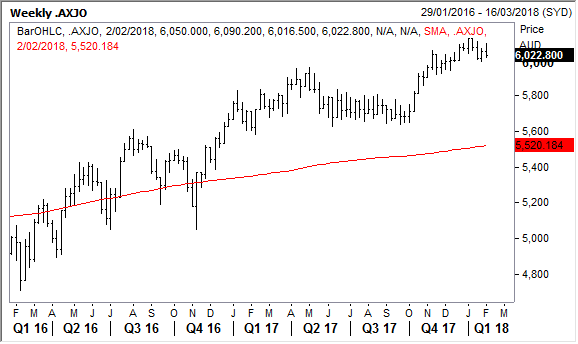 Resource stocks came in for some selling on Wednesday, with BHP and Rio giving up 1.3% and 0.67% respectively, while South32 was off 3.5%. The energy sector was also lower with Woodside down 2.2% while Oil Search shed 1.3%. We have done well overweighting the resource sector at the lows two years ago, but taking a medium term view I see higher levels yet.

The markets could well become more edgy as the prospect of higher interest rates looms, but this scenario has been on the cards for some time, with looming inflationary pressures a key driver. Inflation by its very nature will be positive for commodity prices, and ultimately the resource sector. This is notwithstanding the share price volatility that we may see as a pullback plays out.

The fact is also that global demand is strengthening, and supply remains constrained across the commodity spectrum. Basic laws of economics should therefore ensure pricing tension is maintained.

Rising inflation is also going to be positive for the gold sector. We continue to play this thematic through high quality producers such as Evolution Mining. We also hold Newcrest in the Mining and Resources Managed Account Portfolio. The shares have certainly lagged EVN, with the company continuing to navigate some operational issues.  The tide may be turning though, and the company maintained full year guidance in yesterday’s production update. 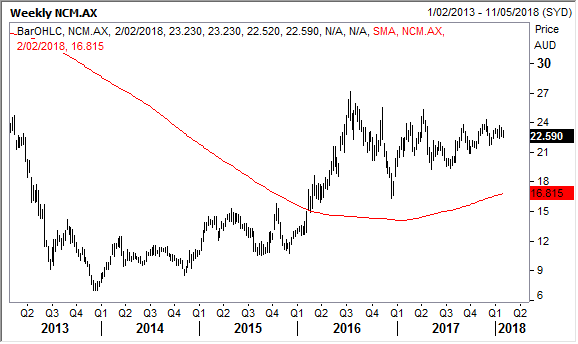 The company reported that second-quarter gold production fell 0.3% on a year ago to 612,695 ounces but was up 17.2% over the prior quarter, underpinned by higher production at the Cadia, Lihir, Bonikro and Telfer deposits. Management expect second half production to be higher, and kept 2018 production guidance of between 2.4 million and 2.7 million ounces.

Chinese news portal Jinri Toutiao is filing a lawsuit against Baidu for unfair competition. The company claims that the top Baidu search result for “Jinri Toutiao” was an article published by Baijiahao, a content platform owned by Baidu. The content of the article that was originally published in mid-December was about government criticism against Toutiao for spreading vulgar and low-quality web content.

The war for technology talent is heating up in China with tens of thousands of people being hired to shore up cybersecurity, help censor online content online content in an attempt to make China number one in the application of artificial intelligence (AI), which is a key pillar of Baidu’s growth strategy. This tech-hiring binge has seen pay in key positions double since 2014, closing the gap with Silicon valley and raising concerns about rising income inequality in China. Baidu was down 3.48% yesterday and is a key holding in the Contrarian Fund and also held in the Global Opportunities, Asian and US managed account portfolios. 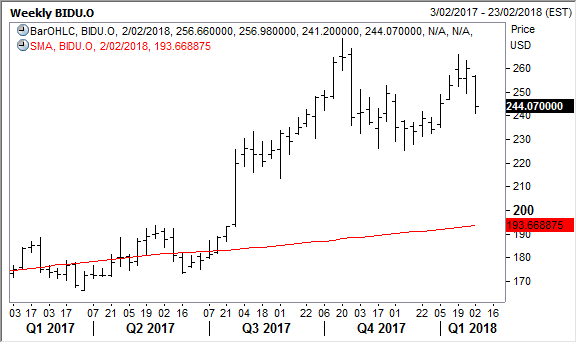 With the dieselgate scandal slowly starting to fade in the rear-view mirror Volkswagen is now facing an inquiry over diesel fumes test on monkeys with the news pushing the stock down by 1.91%. In 2014 the automaker co-funded a research project with Daimler and BMW that conducted tests on 10 monkeys and 25 people with the purpose of defending diesel following revelations that the fuels exhaust fumes were carcinogenic.

Volkswagen’s supervisory board has called for an immediate inquiry, while the German government said that such studies were unjustifiable and called for answers. “I will do everything possible to ensure that this matter is investigated in detail,” Volkswagen supervisory board Chairman Hans Dieter Poetsch said in a statement on Monday. “Whoever is responsible for this must of course be held accountable.”

Volkswagen has been working hard to rebuild itself over recent years, moving towards electrification of its vehicles and spearheading growth initiatives in developing markets. VW has regained the crown from Toyota this year to become the largest automaker in the world, selling 10.7 million cars in 2017 compared to Toyota’s 10.35 million, with this driven by strong sales in China and a recovery in the European market. Despite the recent negative publicity we see VW as a turnaround play and hold the stock in the Contrarian Fund and European managed account portfolio.

Spain-listed shares of Bankia SA extended the slide from Monday on Tuesday, falling 2.5%. The pressure on the stock first stemmed the €235 million loss reported in the fourth quarter, with this due to a €312 hit from restructuring costs linked to its integration of smaller bank BMN. However, adjusted for the restructuring costs, the big picture was decent, with net profit up 5.5% year-on-year to €77 million.

Bankia, which has been partially re-privatised, agreed to take over BMN last year, further consolidating the Spanish banking sector. Bankia is a holding in the Global Contrarian Fund, the Global Opportunities and European Managed Account portfolios. 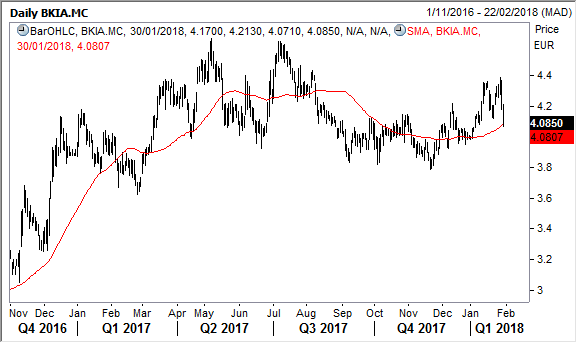