US indices were mixed on Thursday while the US dollar sold off and the 10 Year T Bond yield backed away from the 2.95% level. Commodities, and oil in particular, were stronger with the weaker greenback. Trading throughout the day was again volatile with an initial rally in the S&P500 met by selling after lunch, then another rally, before a dip in the final 15 minutes of trading. The S&P500 and Dow Jones closed up 0.66% and 0.1% respectively, while the Nasdaq was off 0.11%, despite being up as much as 0.9% at one stage during the session. 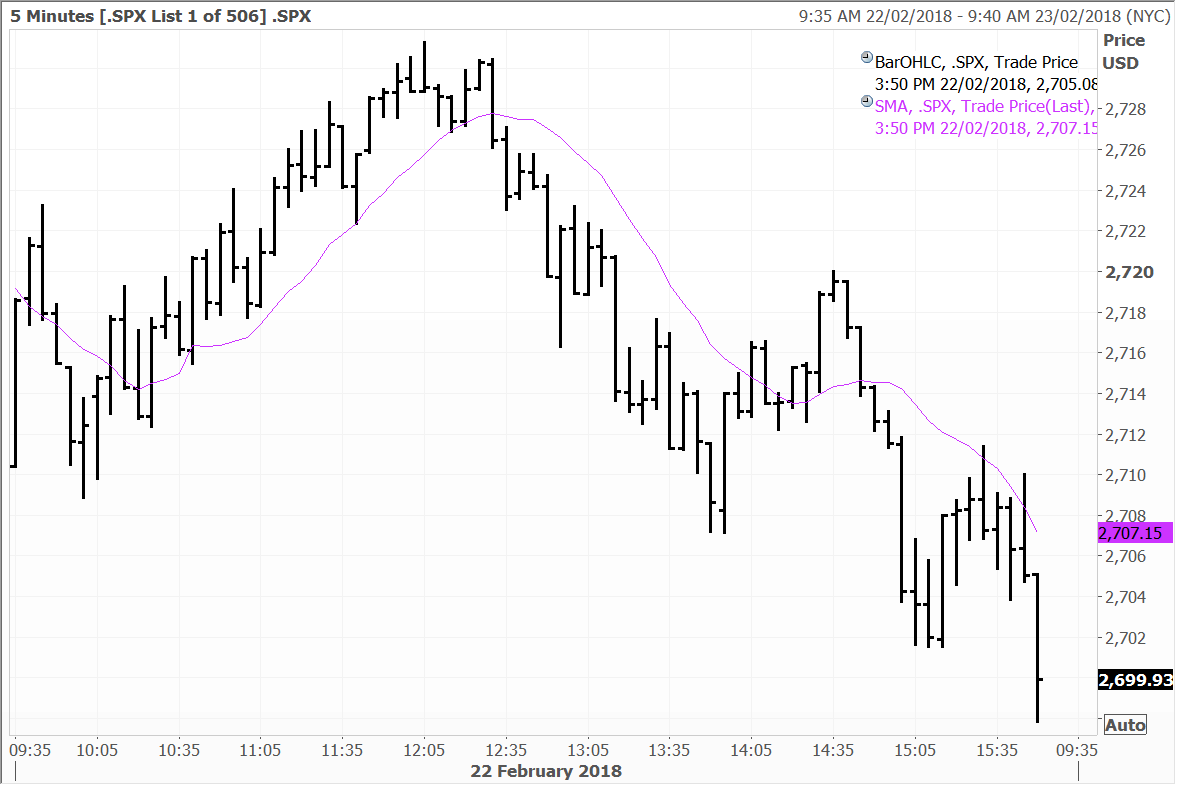 The energy sector led the rally today with crude prices driving higher amidst bullish US inventory data. Brent and WTI lifted around 1.5% and 1.8% respectively to $66.40 and $62.79 which drove a rally in leading energy names. Elsewhere in the commodity spectrum the PGMs all lifted, with gold pushing back up to $1330 and base metals generally firmer.

We have been of the view that inflation is going to accelerate this year, and ultimately that is positive affirmation that US economy is strong, however, the great unwind of QE and the transition from a low rate environment to a higher one is going to instigate some volatility. On that note it will be interesting to see Warren Buffet’s take on the current economic outlook with his annual letter due out later today. In recent years Buffet has chastised many economic commentators for being ’too negative’ on the US economy.

The facts of life are that rates are going to have to move higher as the world adjusts to the ‘higher cost of money’ and with some of the best synchronised growth conditions in decades. Presently, markets are pricing in around three rate hikes between now and December, however we are on the record in calling for at least four. However even if the Fed were to put through four hikes, it won’t be the end of the world…probably just the end of the four decade long secular bull market in bonds. We are short 10 Year T bond futures amongst other markets in the Global Contrarian Fund and will add to this position on weakness.

In economic news, the number of Americans filing for unemployment benefits fell to a near 45-year low last week, pointing to strong job growth in February and solid momentum in the economy. A report from the Labor Department Thursday showed a small decrease in first-time claims for unemployment benefits in the week ended February 17. Initial jobless claims decreased 7,000 to 222,000. Economists had expected jobless claims to be flat. The Conference Board showed a larger-than-expected increase in its index of US economic indicators. The index was up 1.0% in January, after rising 0.6% in December. The 1.0% increase in January exceeded the forecast 0.6% rise.

Oil rose to its highest level in two weeks as American supplies unexpectedly shrank and exports surged. Whilst many fear that a new shale boom will lead to oversupply and another oil glut, the reality is that demand is still very much in front. And demand since the GFC has continued to grow strongly. The energy futures markets jumped as much as 1.9% today after a government report showed US stockpiles inventories had declined 1.62 million barrels last week, which was the largest drawdown in five weeks.

WTI after breaking out of a multi-year range last year underwent a correction in January and February, but this now looks to have terminated with the upward trend reasserting itself in the face of tighter supply, greater than expected inventory drawdowns and growing demand. 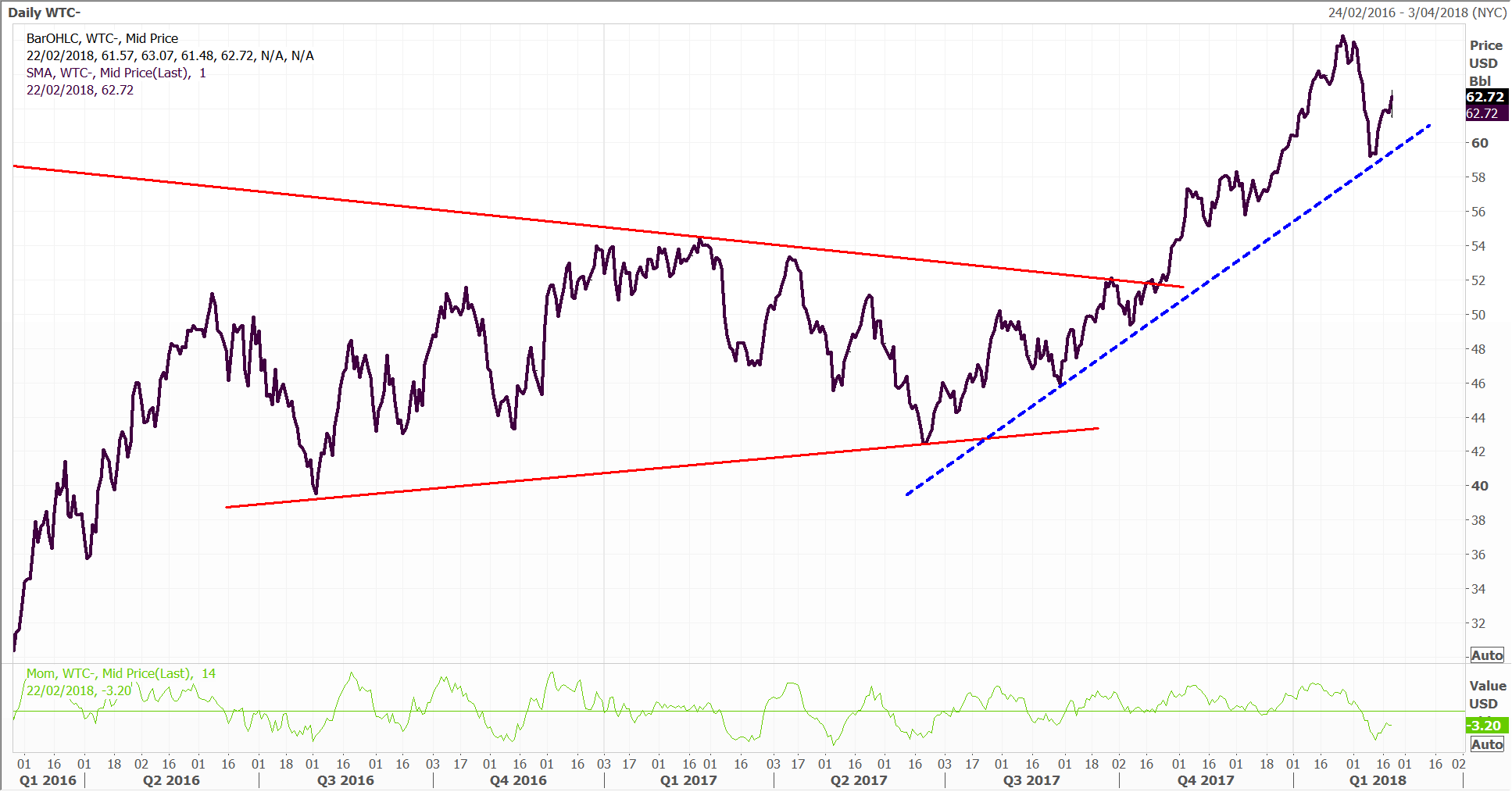 Fracking of shale oil has unquestionably boosted supply to the point where the US has become a major oil producer, but the question is going to be whether, given the new-found discipline with OPEC and Russia, this will be enough to match demand. Supplies in the US remain tight with crude moving from storage facilities in Cushing, Oklahoma, to tankers on the Gulf Coast, boosting exports by 55% to 2 million barrels a day. This is the highest level since October. So clearly despite US production rising significantly, much of the additional supply is finding its way offshore onto the international market to plug the growing demand gap. 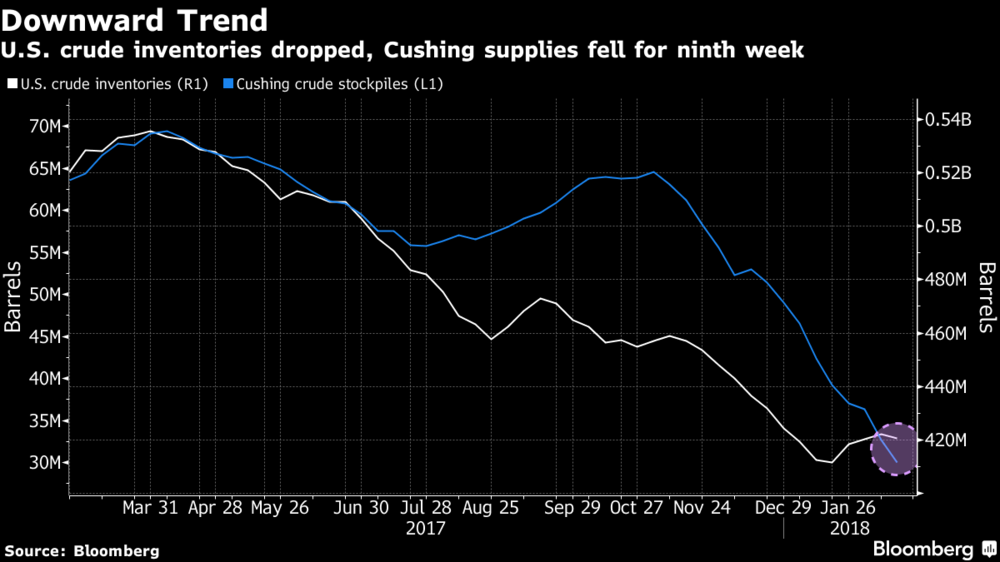 As United Arab Emirates Energy Minister Suhail Al Mazrouei summed up succinctly at the International Petroleum conference this week in London, “the worry is oil undersupply not oversupply”. The Energy Information Administration reported on Thursday that crude production ticked lower for the first time since early January, while supplies at the biggest hub of pipelines and storage tanks in the US, fell for a ninth straight week.

I certainly don’t think that OPEC want to see prices push much beyond $70 which would solicit a much more permanent supply response, however prices it seems are going to remain elevated. And I think that dynamic is going to be positive for the energy sector. We are overweight Asian energy stocks, particularly names that are key players in the fast-growing LNG space such as Inpex, CNOOC, and Oil Search.

Minutes from the European Central Bank highlighted concerns about the weakness of the US dollar. The ECB President last month called out US Treasury secretary Steven Mnuchin for saying a weak dollar is good for the American economy. They also revealed that the hawks on the governing council pushed for a change in communications as they believe economic conditions are now strong enough to drop the commitment to boost the quantitative easing programme in the case of another slowdown.

In Germany, chemical and consumer goods company Henkel gained 2.7% after posting 9% growth for adjusted profit in FY17 and confirming its outlook through to 2020. In Spain, Bankia edged up 0.6% and Telepizza gained 1.4%. We hold both in the European Managed Account portfolios and Bankia in the Global Contrarian Fund.

Most Asian stocks fell in trading Thursday as US bond yields hit a fresh four-year high and the greenback hovered near a one-week high versus a basket of major currencies. That was on the heels of the minutes from the Federal Reserve’s January meeting indicating the central bank is firmly on the path for more interest rate hikes in 2018.

China’s Shanghai Composite was an exception, rising 2.17%. The Hang Seng index slipped 1.48%, led by financials and technology on the downside. In what was broad-based selling in Hong Kong, internet conglomerate Tencent Holdings dropped 2.5% and oil and major giant CNOOC fell 2.2%.

The Macau casino operators gave up some of their recent recovery, with Sands China down 3.1%, MGM China falling 3.2% and Wynn Macau sliding 4.3%. The most recent numbers from Macau showed that tourism arrivals over the Chinese New Year holiday between February 15 and 21 rose 6.5% year-on-year to 963,265. That was less than the 10% boost in visitor numbers from February 15-18. Visitors from mainland China accounted for 73.4% of the arrivals and I am confident that China’s long-term tourism to the special administrative region will continue to swell in the years ahead.

In Japan, the benchmark Nikkei slid 1.07% as the yen strengthened modestly. That hit exporters in general, with robotics leader Fanuc down 1.9%, truck maker Hino Motors falling 2.2%, while Sony held up well, dipping just 0.7%. Banks such as Mizuho, Sumitomo and Mitsubishi UFJ were resilient with smaller drops than the broader market. All are held in the Global Contrarian Fund. Ricoh Co (we have no exposure) slumped 3.9% following a report the company was considering taking an impairment charge of up to ¥100 billion this fiscal year.