Australian equities have been a hard place to make money in the past decade. This has frustrated many – especially foreign buyers, which has led to serial underperformance versus many other global indices, and most notably the US.

A period of catch-up is well overdue. As I have been writing for some time, the fundamental foundations are falling into place, and the technical picture (and an upward break in the ASX) is starting to confirm this. I think when I wrote about Goldman’s technical analyst calling the market down a few weeks ago, the bell went off loudly.

As I wrote yesterday, it is also worth remembering that Australian investors continue to be compensated for their ‘patience’ by a market that is one of the highest yielding globally. Factoring in dividends, the local accumulation indices are around record highs.

At our full day educational workshop programmes (one is scheduled for Melbourne next week) we highlight the value that is added through stock picking. The fact of the matter is that studies (with around 100 years of data) show that over time the average annual return for equities is around 7%. With the market up around 5% this year, and with a yield of 5%, it is actually performing above the bar. Glass half full? Possibly, but food for thought.

We have been adamant that valuation upgrades on higher commodity prices will drive the resources sector higher – and some of the bigger producers which we hold were well bid yesterday. BHP was 1.6% higher, while Rio rose 0.81%. South32 was a standout, up almost 4%. The company’s first quarter was actually a disappointment, but our analyst team remain buoyed by progress on costs, while higher commodity prices will also be a big offset. Our team believes the stock is still a buy.

The energy sector also pushed higher with a 1.1% gain, although the exception was Oil Search which lost 3% after announcing an acquisition. The company is buying stakes (25.5% to 37.5%) in assets in Alaska for US$400 million. Included is the Nanushuk oil field, which the company describes as “one of the United States’ largest conventional oil discoveries in 30 years, and one of the largest globally in the last three years.” Production rates being targets are 80,000 to 120,000 barrels per day, with first production in 2023.

Collins Foods has been under pressure of late, but had a big bounce yesterday, with the shares rising 6.7%. I always get nervous going into a profit result because information sometimes leaks.  The company is due to release results at the end of this month, and there is probably some positioning ahead of that. I have focused on YUM Brands offshore and the top-line growth they have delivered at KFC, which is making a resurgence. Time will tell, but in this market if Collins delivers above or below consensus forecasts the stock could gap – up or down – on the day by 10%.

Yesterday’s respect of the primary trend line by Collins Foods was significant. 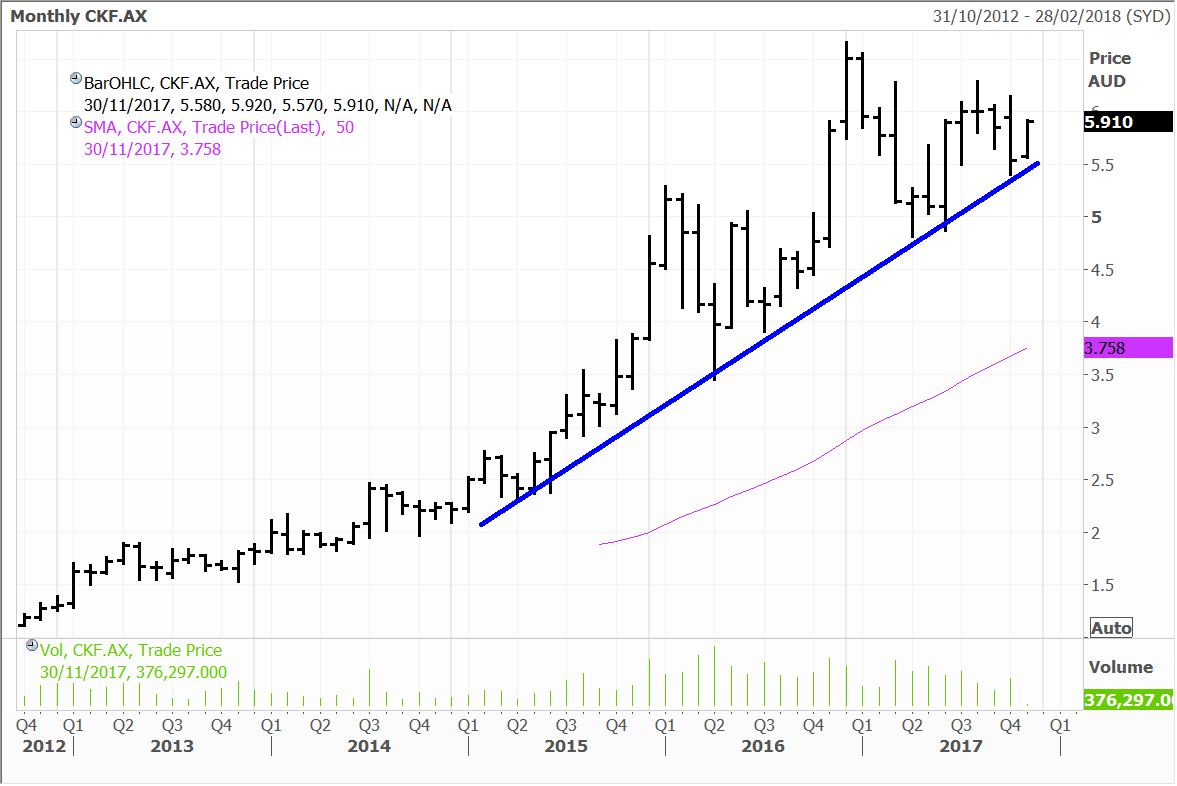 The market may not be seeing the woods from the trees. Yesterday our Head of Research Greg Smith went through this point at the webinar. He has met with management at Collins Foods a number of times, and continues to have great respect for the way in which growth is being pursued, both domestically, and offshore.

The company kicked its European expansion last December with the acquisition of 12 restaurants in Germany. Management reported at the AGM that the integration here is well on track. This deal was followed up by the purchase of 16 restaurants in the Netherlands, which was completed in late August.

We see the deal as offering up significant earnings growth potential for Collins, with KFC under-represented in these regions versus the likes of McDonald’s. The same is true generally in Europe, and if management can execute successfully, further expansion across the continent is likely in time. We also expect the company to apply its own secret sauce (as proven in Australia) in lifting productivity at the acquired stores.

Although KFC as a brand is more established in Australia, the growth opportunity therein comprises a combination of acquisition and optimisation of existing stores and establishing new locations in step with demographic changes.

This no doubt lay behind the company’s recent acquisition of 28 restaurants in Australia from Yum! Brands. The deal reinforces the company’s position as the largest KFC franchisee (with 223 outlets in total) in Australia, and not only diversifies Collins Foods’ geographic footprint but also increases the potential opportunity for additional organic store expansions in these new jurisdictions. The price in our view was reasonable at $110.2 million in cash or 6 times pro-forma EBITDA.

Much encouragement can also be taken by the company’s track record on acquisitions and successful integrations to date. Acquisitions (of 13 stores) around the Victoria/NSW border helped see revenues last year grow 10.3% to $633.6 million, with same store sales growth also an important feature. Strong cost controls and a focus on productivity improvements have also meant that revenue growth has translated into robust earnings gains.

Sony rallied as much as 11.6% on Wednesday after the group lifted its annual earnings guidance by more than a quarter. The group has been boosted by the success of the PlayStation 4 console and the Spider-Man: Homecoming movie. Sony is a Top 10 holding in the Fat Prophets Global Contrarian fund and the Global Opportunities and Asian Managed account portfolios.

What is good for Sony is good for Japan – this is the bigger story. Japan’s stock market has “awakened” after a four decade slumber – Sony’s price action yesterday is just the tip of the iceberg. Japan, despite being the world’s third largest stock market and economy, is completely under-owned by the rest of the world, including most hedge funds. We called the Nikkei to 25,000 by Xmas and I think the gap will close quickly from yesterday’s close of 22,420. 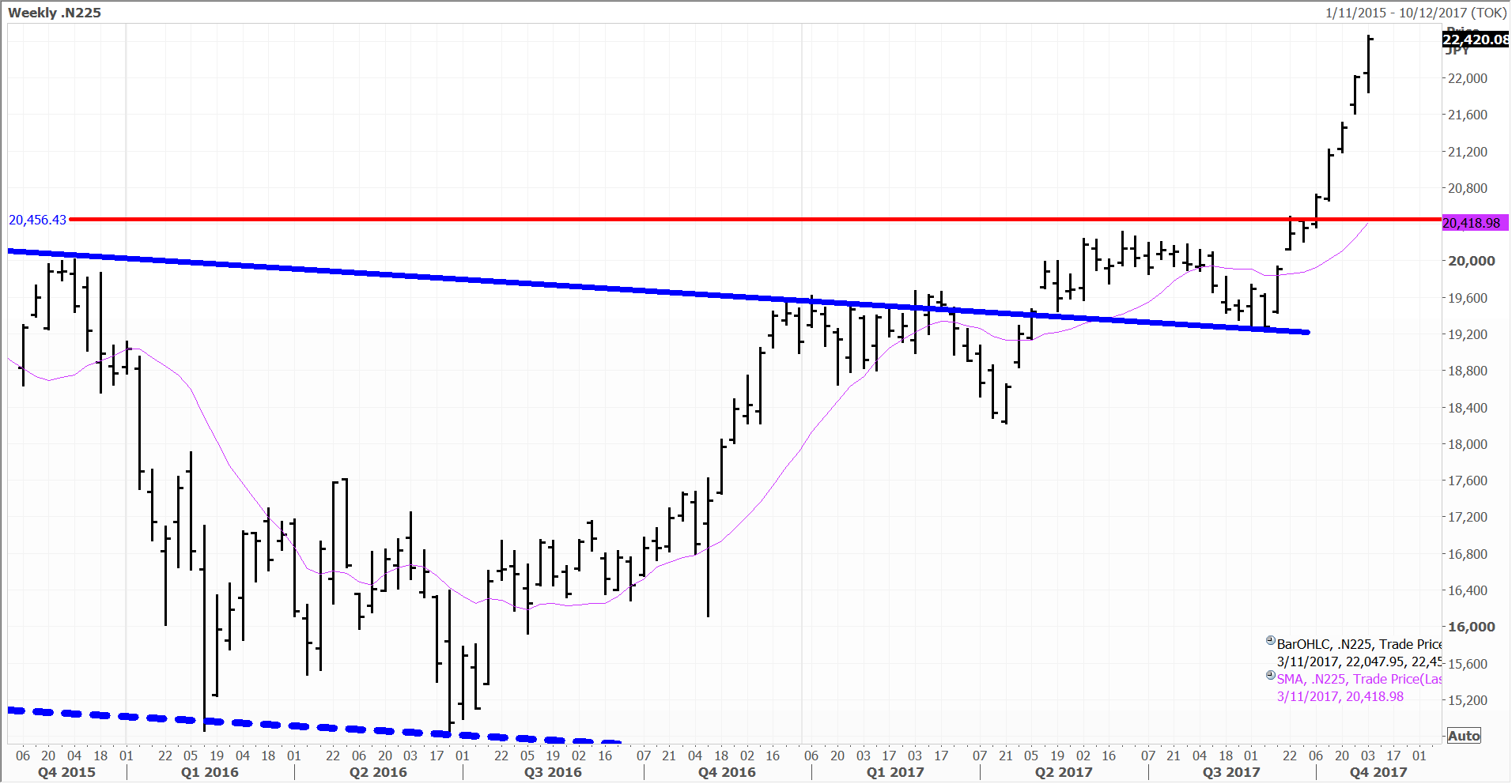 India’s state bank ICICI resumed its upwards run after the Indian TARP last week, with the shares rallying 3.7%. ICICI has rallied by more than 20% since last week’s government announcement to fast track the recapitalisation of the State owned banking sector. Mumbai- based Wealth Mangers KR Choksey have released a Buy recommendation citing a potential 30% upside from current levels. They join Morgan Stanley and a host of others.

The Broker maintains a favourable view of the lenders improving asset quality. In 2Q18 advances grew 6.3% year on year while non-performing assets by 12 bps on the previous quarter to 7.7%. A slight improvement in Net Interest Margin helped to boost Net Interest Income by 8.7% on the previous year. ICICI Bank is a core holding in the Contrarian Fund, Global Opportunities and Asian Model Portfolios. 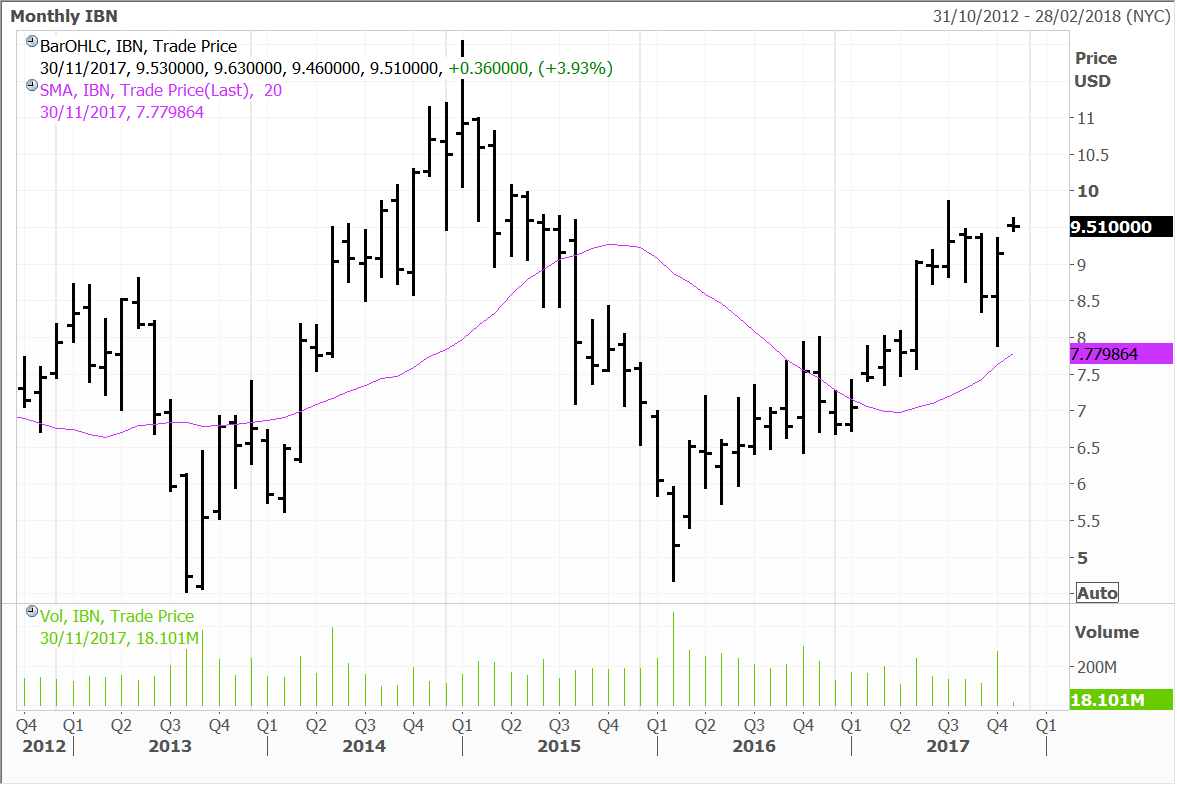 German automaker Volkswagen was up 4.8% with the company reporting North American sales of Porsche and Audi for the month of October were up by 4.6% and 9.6% respectively on the previous year. Volkswagen continues to be out of favour with the market following the diesel-gate scandal although is ticking boxes operationally. We see the company as a potential turnaround play and hold Volkswagen in the Contrarian Fund and European Model. 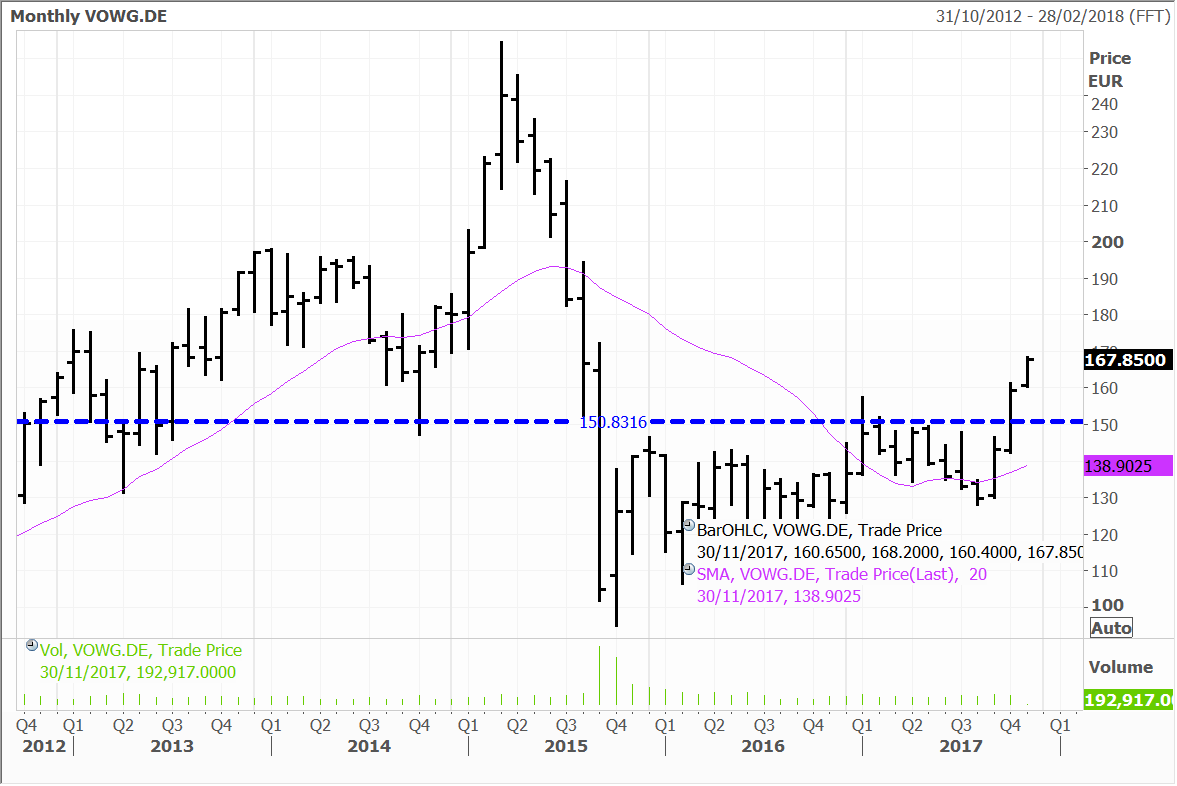 On a roll in Macau

The better than expected October gaming tally boosted shares of the local casino operators yesterday, with Hong Kong-listed shares of MGM China up 4.3%, Sands China rising 4.2% and Wynn Macau adding 3.2%.  We hold all these stocks in the Global Contrarian Fund, as well as in the Global Opportunities and Asian portfolios. 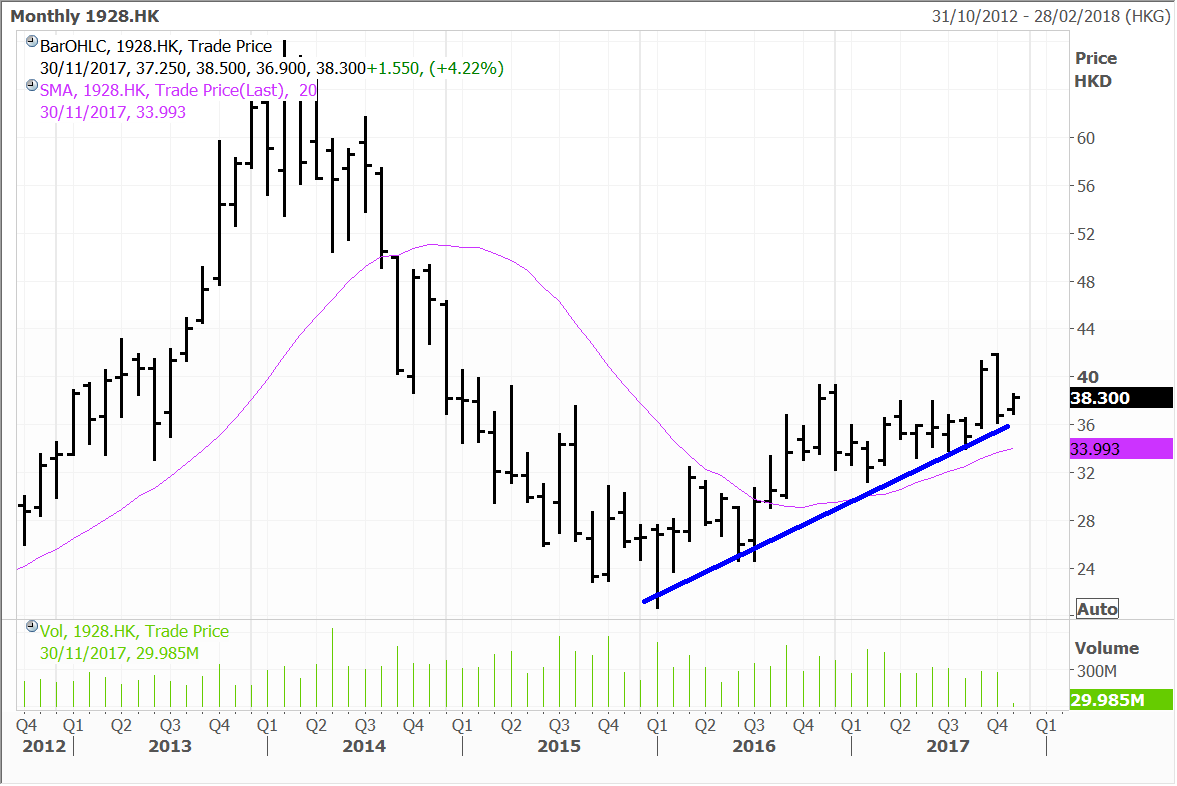 Japan-listed shares of electronics and entertainment conglomerate Sony surged 11.4% in trading yesterday, following the company reporting a cracker second quarter and lifting its full year operating profit guidance to ¥630 billion (US$5.6 billion) for the fiscal year ending March 2018. Sony is a core holding in the Global Contrarian Fund, along with the Global Opportunities and Asian portfolios.

As mentioned in the Daily yesterday, it was a big boost, as only a few months ago Sony had forecast profits of ¥500 billion for the year. If Sony hits its new target, it would see the company surpass its record ¥526 billion profit set way back in the year ended March 1998. 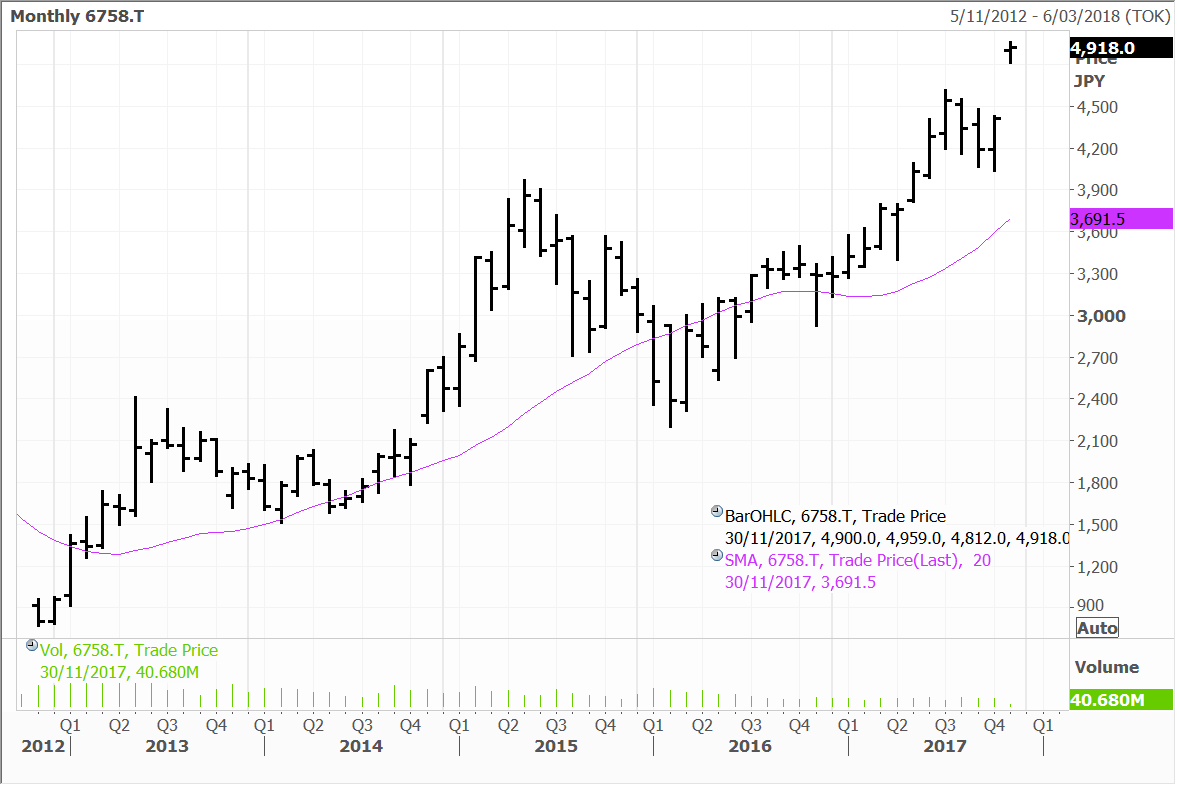 Moving onto the second quarter results and they highlight the huge turnaround that the company has made under the leadership of CEO Kazuo Hirai.

Sales surged 22.1% to ¥2.06 trillion in 2Q17, with increases across the board and a particularly strong showing from the Game & Network Services segment, which houses the PlayStation. Favourable exchange rates also played a supporting role, as on a constant currency basis, sales were up 15%. Operating income jumped to ¥204.2 billion from ¥45.7 billion a year earlier and easily topped the ¥140.5 billion average analyst estimate.

The largest contributors to the boost in operating income were the Game & Network Services, Semiconductor and All Other segments, with increases from the prior year period of ¥53.6 billion, ¥35.8 billion and ¥32.6 billion respectively.

The year ago quarter included a ¥9.4 billion inventory write-down of image sensors and a ¥32.8 billion impairment charge related to the transfer of the battery business. Sony benefitted from a lower effective tax rate in the quarter as well. Net income of ¥130.9 billion was up from ¥4.8 billion a year earlier. This equated to ¥101.35 per diluted share, compared to ¥3.76 per share in 2Q16.

The robust health of Sony’s results is a testament to the restructuring efforts of Kazuo Hirai. He has spun-out or sold several businesses such as the Vaio computer business and through triage has returned segments such as the Home Entertainment and Sound (TVs) to the black. A few years ago the segment was bleeding red ink, but in 2Q17 the TV business posted an operating profit of ¥18.9 billion. Meanwhile, the PlayStation and sensors businesses are thriving.

The PlayStation 4 has thrashed its chief rival, the Xbox in terms of unit sales and shifted 4.2 million units in the quarter and has now shipped 67.5 million units worldwide.

The Game & Network Services business posted a 35.4% increase in sales to ¥433.2 billion, supported by strong software sales. The company’s VR (virtual reality) headset is also outperforming rivals such as the Oculus Rift and HTC Vive. Segment operating profit jumped from ¥19.0 billion a year earlier to ¥54.8 billion in 2Q17, although it got an assist from an internal royalty adjustment.

Sony has invested billions into developing its state-of-the-art image sensors in recent years and this is paying off, with the semiconductor business delivering a 17.9% increase in sales to ¥228.4 billion.

Segment operating income turned around from a loss of ¥4.2 billion in 2Q16 when the division was negatively impacted by the Kumamoto earthquakes, to a profit of ¥49.4 billion in 2Q17. With smartphone makers now moving to dual cameras and an expansion into the automotive sector the future looks rosy for the segment.