The major US indices started the week on the front foot on Monday with the Dow gaining 0.72%, and the S&P500 up 0.45%. A rally in technology stocks saw the Nasdaq advance 0.69% to 7,606 – a record closing high. Sentiment was boosted by a US$7.5 billion acquisition by Microsoft, with its shares hitting a record. Apple also closed at an all-time high.

The latest rally in the tech space is gaining momentum. Apple, Amazon, and Microsoft (the world’s three most valuable publicly traded companies) climbed to record highs on Monday. The Nasdaq hit a new all-time closing high. 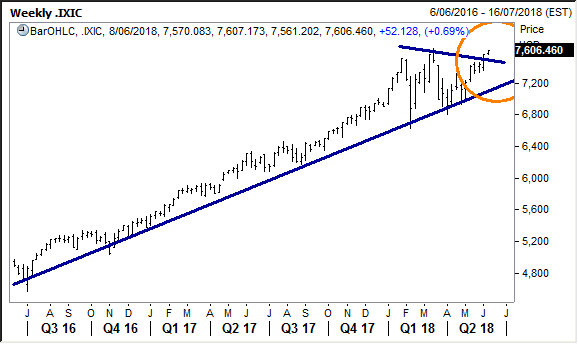 Elsewhere, the small-to-mid cap Russell 2000 index closed 0.33% higher. Optimism over the US economy following the strong job numbers has helped to offset fears over a global trade war, while positive developments with respect to North Korea have also provided some ‘geopolitical comfort.’

Baidu shares surged 5%, benefitting from a big move in its separately-listed video streaming platform iQiyi last week. The latter company surged more than 20% over the past trading week, boosted by a new bullish broker initiation on the stock that has been called the Netflix of China. Baidu also saw supportive news flow from its AI and cloud computing efforts and development of a ‘blockchain’ initiative.

In Japan, the benchmark Nikkei index finished up 1.37% with a slightly weaker yen helping export names. Toyota surged 3.9%, with a broker upgrade adding further support and dragged along a few other vehicle stocks, such as truck maker Hino Motors, up 2%. PlayStation maker Sony (+3%) was another exporter logging strong gains, along with the likes of air conditioning giant Daikin Industries (+2.6%).

Technology and financials were also strong performing sectors on the day. Silicon wafer specialist Shin-Etsu Chemical advanced 2.1% and the megabanks Mizuho, Sumitomo Mitsui and Mitsubishi UFJ all outperformed the benchmark index to the upside.

Chinese search engine operator, Baidu plans to leverage its knowledge in artificial intelligence (AI) to gain an advantage in the race to develop cloud services according to company president Ya-Qin Zhang. Stating that cloud business has moved away from price competition for basic storage and computing services.

Baidu – known as the Google of China, is banking on its AI, machine learning and big data analysis capabilities to help ‘businesses address real problems’. “We don’t aim for the biggest, but we aim to provide corporate users with the most intelligent cloud,” Zhang said.

Baidu remains the smallest player in the Chinese tech trilogy known as ‘BAT’ – Baidu, Alibaba and Tencent. Baidu expects its cloud revenue to reach 4 billion yuan in 2020, a mere 10% of Alibaba’s same forecast and 14% of Tencent’s. “For cloud services, we don’t focus too much on revenue, but on the products and services themselves. The market potential will be multiple times bigger than the IT industry”, Zhang added.

The company has more than 100,000 corporate users with most of them being paying clients. “They are willing to pay in exchange for more secure and sustainable cloud services,” Zhang said. He continued that big companies preferred tailor made services and small/medium sized firms were after platform technologies capabilities. 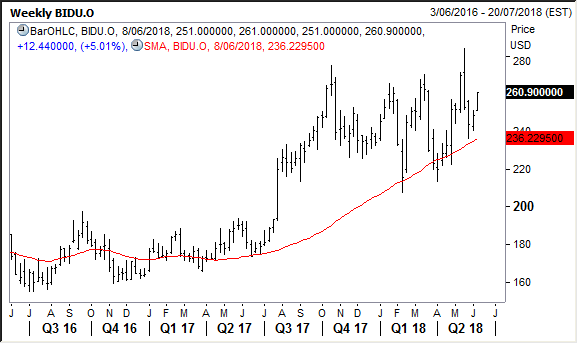 Car-sharing service, Zipcar – owned by car rental company Avis, has teamed up with German automaker Volkswagen and will introduce 300 VW e-Golfs to London in July. The cars will be available as part of the Zipcar Flex service, that allow members to ‘drive and drop’ one-way around the capitol.

Volkswagen said that it is hoping that the move will break down barriers to greater electric vehicle acceptance and making electric driving more common in London. Zipcar’s general manager said: “With over 200,000 Zipcar members now in London, we are already seeing Londoners embracing car sharing rather than car ownership in growing numbers. If we are to achieve healthier, cleaner streets, as set out in the Mayor of London’s latest Transport Strategy, this change away from car ownership and towards car access is essential.”

“In encouraging this change, we have always wanted to use the cleanest possible vehicle, which is why we’re incredibly proud and excited to team up with Volkswagen for this zero-emissions initiative. It marks another step towards our vision for a greener London where car sharers outnumber car owners, making our amazing city an even better place to live for all.”

Alison Jones, managing director of Volkswagen UK, said: “This is an exciting step for Volkswagen. Thousands of Zipcar members will experience electric driving, perhaps for the first time, and we know they will love the functionality and ease of use that the all-electric e-Golf provides.”

The Hong Kong-listed Macau casino operators Sands China (+0.6%), MGM China (-0.4%) and Wynn Macau (-0.3%) stabilised on Monday, after facing some selling pressure on Friday when investors took some profits on the strong performing sector after May revenue growth for the sector fell shy of expectations. The kick-off of the soccer World Cup later in the month may also pose a “headwind” for gambling in the casinos with many punters preoccupied with the widely-watched sporting event.

Recent data from the Gaming Inspection and Coordination Bureau of Macau showed casino gaming revenue in the world’s largest gambling hub increased 12.1% year-on-year in May to 25.49 billion patacas, equating to about US$3.1 billion.

That represented a cooling in the pace of increases we have seen earlier in the year and was well below the 27.6% year-on-year increase seen in the month of April. The May increase also missed the 16% to 20% growth range expected by analysts.

An adverse (for the casinos) VIP ‘luck’ factor is believed to have played a key role in the slower pace of growth for May.