In Australia, the market was slightly lower on Thursday with the ASX200 edging down 5 points to 5738. Most sectors were weaker, although mitigating matters were strength in the financials, along with some buying in Telstra, which several institutions appear to be turning more positive on at current levels. Myer’s result was not as bad as feared, with the stock gaining on the day, but nonetheless highlighted the significant challenges for the retail sector.

A big problem for consumer facing stocks is the fact that Australian households are heavily indebted and are increasingly price sensitive in a competitive environment. Traditional bricks and mortar operations have less room to cut prices than those with a more established online presence.

Business conditons have gone from bad to worse at Myer 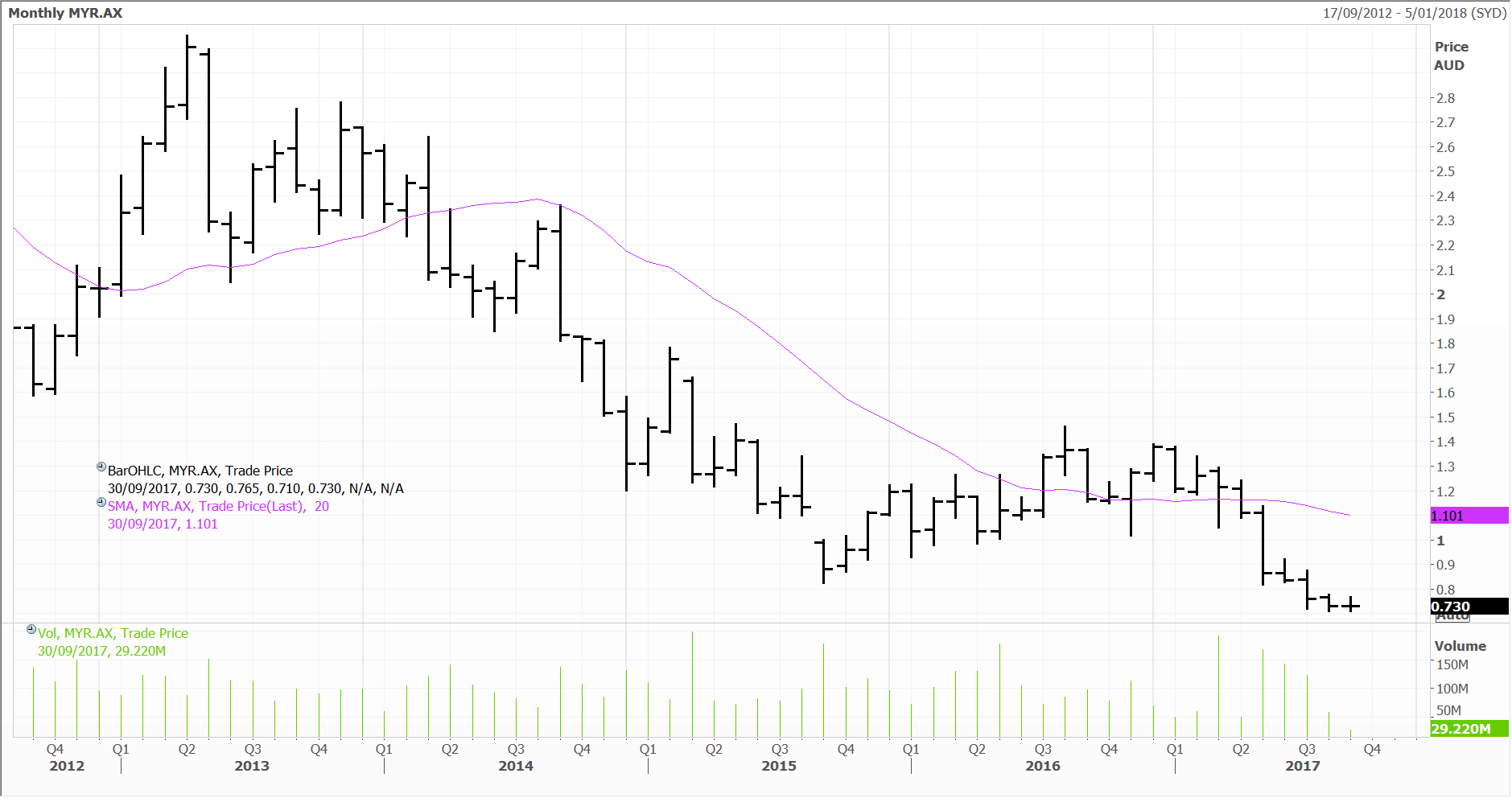 This was clearly evident in Myer’s result, with net profit falling 80% to $11.98 million. Underlying earnings were 1.9% lower at $67.9 million, which was at the bottom end of company forecasts, although above market consensus expectations (according to Bloomberg) of $64.2 million. The shares therefore rose despite the worst result since listing in 2009.

Myer is clearly facing significant disruption, and also substantial competitive pressures, but it is not the only one. Results have also been weak from David Jones and Harvey Norman. Companies are looking to respond through cost cutting, and a tilt towards online, but structurally this will take a long time to play out. We do not have any exposure to retailers in our model portfolios.

As I wrote yesterday, one bright spot for the consumer, and associated stocks, is that the employment market in Australian is strong, and indeed getting stronger as yesterday’s data from the ABS showed. Employment rose by 54,200 in August, which was ahead of consensus forecasts for a gain of 19,000. Also encouraging was a 40,100 job increase in full-time work. The unemployment rate held firm at 5.6%, and the participation rate edged up to 65.3% from 65.1%. 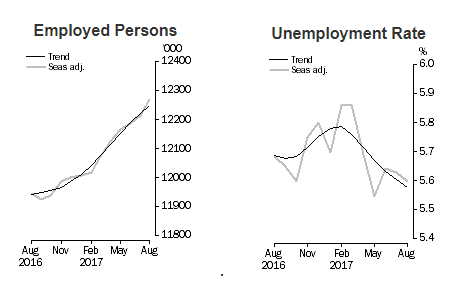 The employment market in Australia clearly has had strong momentum over the past six months, with more than 250,000 jobs created, the best performance in 17 years. As is the case in other countries with full employment, I think this will drive wage growth which has been absent, and push inflation higher.

The conundrum for the RBA is that household debt levels mean there is no clear way for the central bank to aggressively tighten. The RBA will, like other central banks, choose economic stability over inflation containment. This underpins our view that we are in for much higher levels of inflation as central banks drag their feet towards tightening monetary policy and I see this dynamic playing out prominently next year and beyond.

As I alluded to yesterday, last night saw the government pass proposed changes to media legislation, along with amendments made by Nick Xenophon, by 31-27. The House of Representatives (which sits next in October) still needs to rubber stamp this for it to become law, but it will not be an issue given the government’s majority.

Once enacted this will pave the way for significant media reform and will certainly be a boost to ‘old media’ companies which are also tilting towards ‘new media.’ This includes Fairfax which has the demerger of Domain on the horizon, but whose print assets are still being priced at virtually nothing.

Fairfax CEO Greg Hywood unsurprisingly gave the government a high 5, noting “We congratulate the Prime Minister The Hon Malcolm Turnbull, and the Minister for Communications Senator The Hon Mitch Fifield, for bringing media legislation into the modern age.”

He went on to say “it is no small feat having the sector united on what is the best legislative setting for the future. Fairfax acknowledges that there was broad support by the Senate crossbenchers. Mention must also be made of the efforts of Nick Xenophon and his team for getting behind and pushing for material support for regional journalism.”

Too true, and as I noted yesterday, I think that media reform and the Domain spin off will be important catalysts to push Fairfax’s share price much higher, and indeed back towards levels seen during the private equity bids. Time will tell. 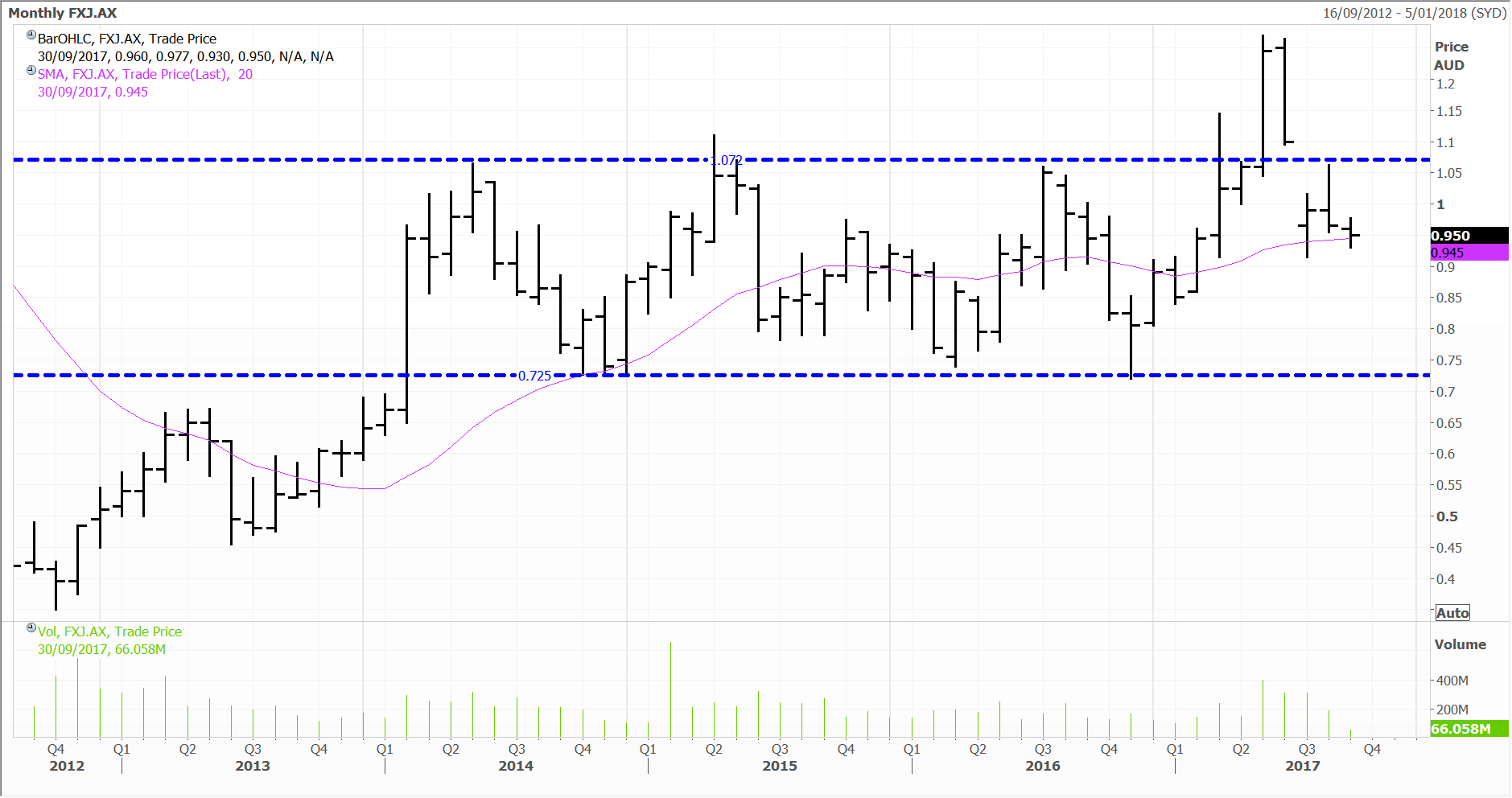 Another stock which is looking positive technically is Mantra. The share price has picked up in recent weeks after reporting the June 30 profit result. The stock has firmed despite ongoing strength in the Australian dollar, which is now above 80 cents versus the greenback. Sentiment has been boosted by a strong full year result, along with further acquisitions to drive growth.

The fact of the matter is that currency strength in the A$ versus the currencies of two of the company’s (and Australia’s) most important visitor markets (Japan and China) has been relatively constrained and will have no revenue impact.

A strong full year result, and indeed a rise in average room prices in the resorts segment, in our view, provides further evidence that the threat of disruptors (such as Airbnb) is overstated. The ability to display pricing power also underlines Mantra’s high quality, differentiated offering, and strong brand.

Our analyst team reiterated a buy on Mantra this week, and continue to believe that the stock offers excellent leverage to robust tourism markets. With strong growth on offer, the FY18 earnings multiple of 17 times (dropping to 16 times in FY19) is undemanding in our view. The stock also comes with a 4% dividend yield. We hold Mantra as a core stock in the Global Contrarian Fund, as well as the Small/Mid-Cap model portfolio. 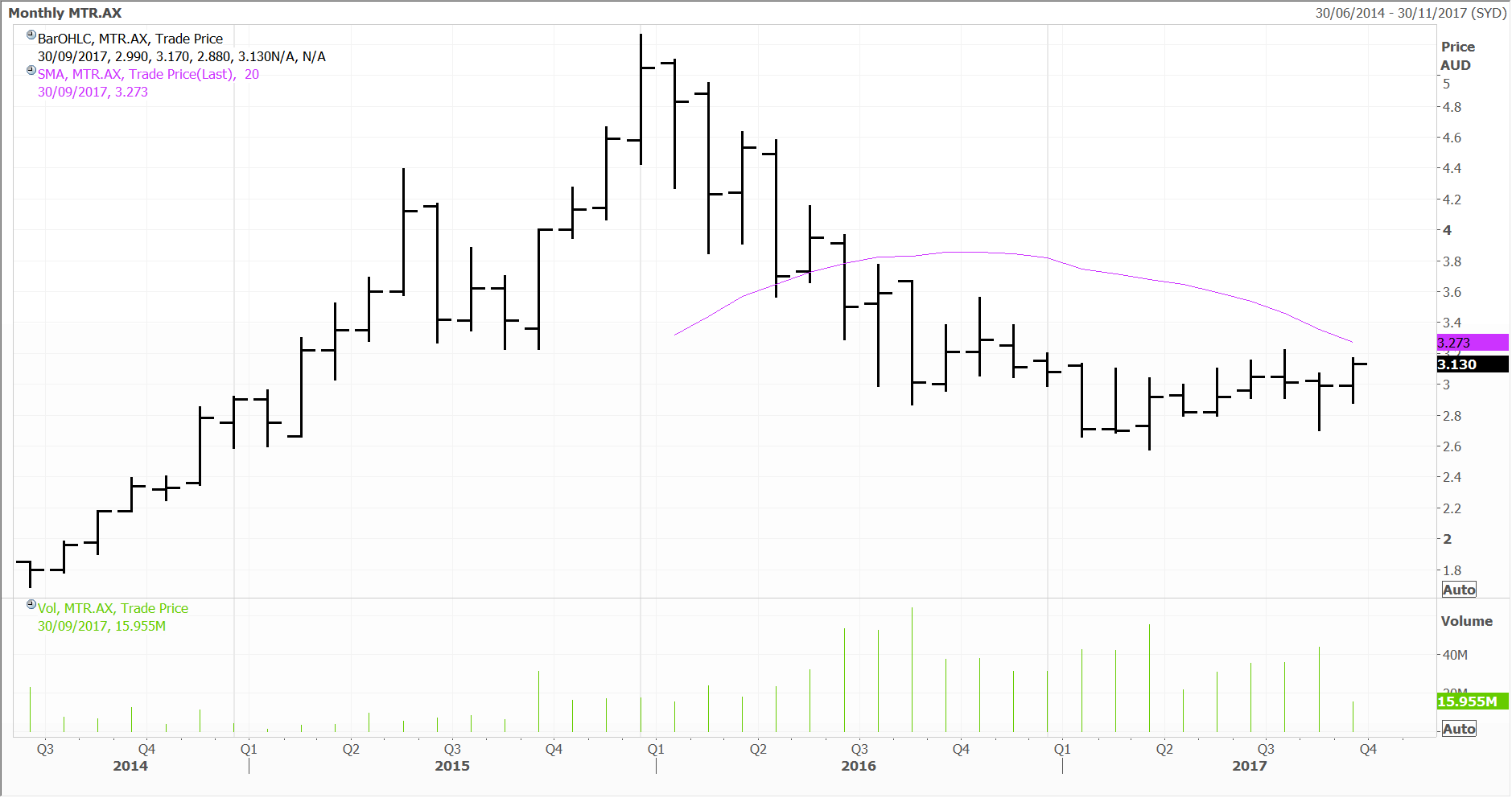 Mitsubishi UFJ Financial Group (MUFG) has chosen Amsterdam as its base for investment banking operations in the European Union, assuming its UK subsidiary will lose its cross-border passport for banking business because of the Brexit process. The lender said it will apply for a license to establish a subsidiary in the Dutch capital city in a press release issued this week. Mitsubishi UFJ is a core holding in the Fat Prophets Global Contrarian Fund and the Asian and Global Managed Account Portfolios.

Whereas London for a long time has been the go-to city for big banks to base themselves to cater to the European market, the increasingly likely prospect of a ‘hard’ Brexit is seeing many recalibrate plans. This is as their UK subsidiaries could soon find themselves at a major disadvantage versus regulated subsidiaries located in the EU bloc for doing pan-European business. 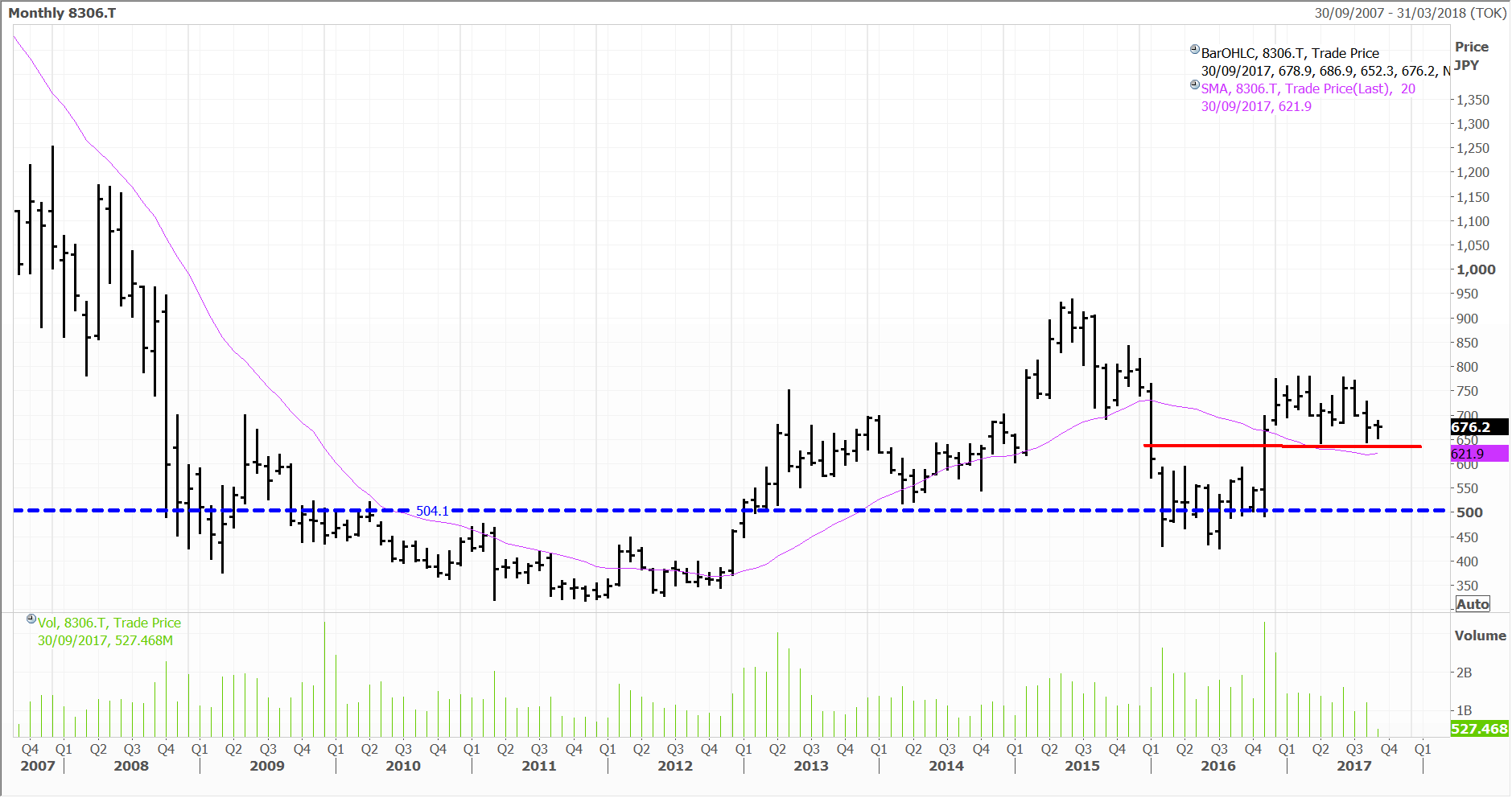 Accordingly, many financial firms are preparing to at least move some of their operations to other major financial capitals in the European Union. MUFG phrased it thus, “The new subsidiary in Amsterdam will ensure that the Group can continue to provide these services to its EU clients, even if the cross-border passport is lost as a result of Brexit.”

Bloomberg had earlier reported that MUFG was mulling both Amsterdam and Paris for its EU investment banking base. The company already has commercial banking license in the Netherlands. The decision of MUFG to set up shop for investment banking business in Amsterdam is a coup for the city, as MUFG has considerable clout with about US$2.8 trillion in assets.

This contrasts with the decision of peers Mizuho Financial Group and Sumitomo Mitsui Financial Group (also holdings in the Fat Prophets Contrarian Fund, the Global Opportunities and Asian Managed Account Portfolios), who have chosen Frankfurt for their EU base post-Brexit. On the other hand, the Royal Bank of Scotland has also chosen Amsterdam for its new EU hub.

Amsterdam is considered to have relatively friendly regulation and some of the fastest data links in the world, which has helped them attract several financial market platforms to the city. However, according to Reuters a cap on bonuses for workers in the financial services industry has been an impediment to getting investment banks to opt for the bicycle friendly city. 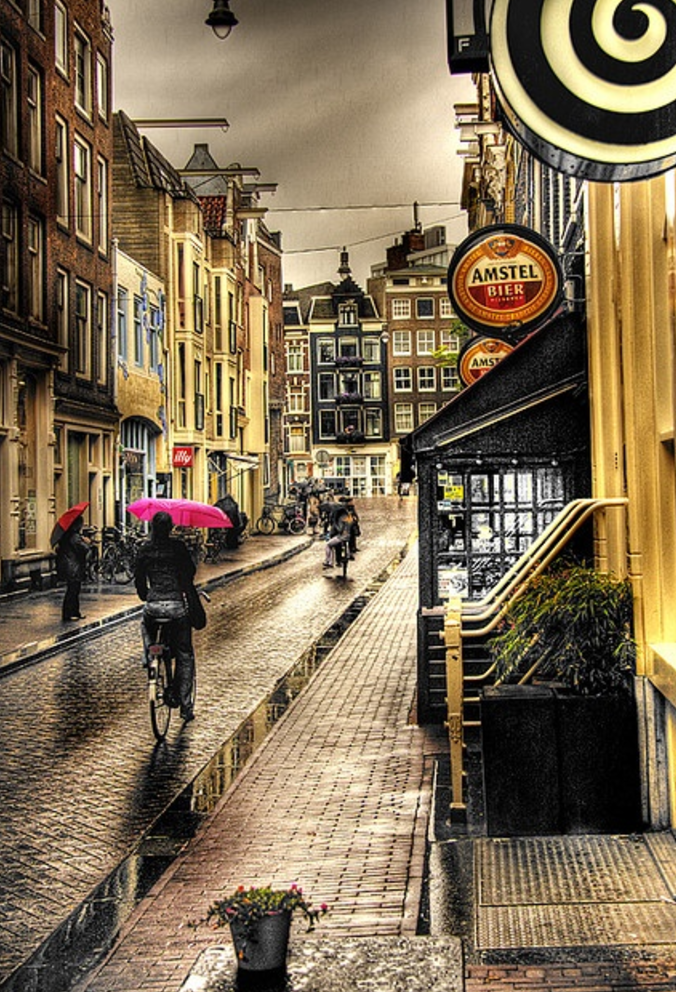 However, in June, the Dutch parliament voted to scrap that limit in a non-binding consultative vote. The three EU cities that are vying for big banks business post-Brexit seem to be Amsterdam, Frankfurt and Paris.

Due to tough conditions at home, MUFG has been increasing its international footprint over the past decade. The bank has ambitious plans to continue down that path as we have written about in the Daily previously. The banking giant is keen to further bulk up its already large US (with a 22% stake in Morgan Stanley and sole ownership of the California-based Union Bank) and Southeast Asia footprints. Europe is also a target.

The Tokyo-listed shares of MUFG have traded sideways this year, but trading on less than 0.6 times book value we view the Japanese mega-bank (and peers Mizuho and Sumitomo) as offering an attractive risk to reward proposition. MUFG has already absorbed the negative impact from the earlier implementation of the Bank of Japan’s negative interest rate policy (NIRP) and posted year-on-year growth in the first fiscal quarter from April to June 2017.

Inflationary pressure is slowly bubbling to the surface in Japan and this should lead to a steepening of the yield curve. Given the low valuations of the sector and underweight positions of most financial institutions to the sector, there is potential for a substantial upward re-rating of the multiples ascribed to the Japanese banks over the next year or so.