In Australia the market had another day in the green, with the ASX200 edging up 5 points to 5896. Resource stocks pulled back after the recent strong run, while most other sectors were positive, including the financials. QBE Insurance had a good session, rising 2.8% to $10.91. I continue to see a rising yield curve as being a powerful tailwind, and while some investment banks are putting it in the ‘too hard’ basket the value is clear, with the stock at a discount to peers. 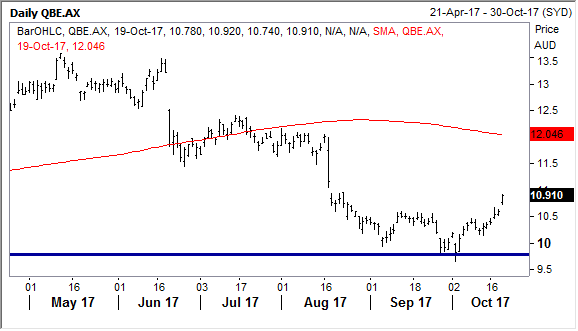 th anniversary of the 1987 crash today, but there is little to suggest a repeat is around the corner, particularly as it relates to Australia, with extreme exuberance not a feature. The Australian market has underperformed most other benchmarks for months, and indeed years. The ASX200 though has at least broken out of its trading range with some vigour, and as I have been writing, this will set up for a strong run through the other side of the 6000 level and beyond into the end of the year.

Investor optimism should also be justified by a strengthening economy, and notwithstanding the risks posed by the housing market and high levels of debt. The jobs numbers out yesterday were robust, with unemployment falling to 5.5% in September, a four-year low. The labour market is going from strength to strength, with 12 straight months of employment gains the longest run since 1994.

There has been a net increase of 335,000 positions over the past year, with the rebound in the mining sector clearly evident in the resource concentric regions. Around 48,000 jobs have been added in Western Australia over the past year, while trend employment has risen over 4% in Queensland (with a burgeoning tourism sector no doubt helping).

With a tightening labour market, this has to drive wage inflation, which has been largely absent. Indeed, I think this will prove a global phenomenon in other countries which are nearing full employment.

We have consistently made the call that inflation and interest rates are going to break out to the upside, and on that it was interesting to read comments from former RBA Governor Glenn Stevens in a note for Ellerston Capital, which is a hedge fund that he advises. He believes that global investors have become complacent about the risks of a sharp rise in inflation, and I agree. We have regularly said that central banks were going to be increasingly behind the 8 ball when it comes to containing the inflation genie, and we highlighted this on the fatWrap cover last week.