The US indices mostly lifted on Wednesday, following stronger markets in Asia and Europe, and as trade tensions were taken in stride by investors. The Nasdaq closed at a new record high, boosted by the large-cap tech sector.

Trump’s U-turn on the Mexican border parental/child issue is illuminating in that it shows at the end of the day DJT is focused on “point scoring” and will bend to his broader electorate. His popularity has surged in recent months, particularly with the conservative states. Trump, whatever one thinks about him, has “polarised” American politics. It is going to be fascinating to watch how the mid-term Primaries playout.

The next mid-term election is due in 2018. Federal offices that are up for election during the mid-terms are members of the US Congress, including all 435 seats in the House of Representatives, and the full terms for 33 or 34 of the 100 seats in the Senate. The Republicans control 51 seats of the 100 in the Senate but need 60 to pass bills without Democrat support.

There is much riding on the November elections for Trump and the Republicans and a lot up for grabs. Trump will need to win convincingly here to avoid political paralysis in the second half of his term, and to avoid being a one term President at the next election in 2020.

Fed Chair Jerome Powell said on Wednesday that the “US jobs market does not appear overly tight and the Federal Reserve should continue with a gradual pace of interest rate rises amid a strong economy to balance its employment and inflation goals.” Powell also cautioned central banks against trying to run an excessively hot labor market for too long in case “it undermines their credibility on low and stable inflation. With the economy strong and risks to the outlook balanced, the case for continued gradual increases remains strong.”

What was interesting was that Powell went on to say that “there appeared to be no historical precedent for inflation remaining so unresponsive to such low levels of unemployment.” Should the theory that low unemployment spurs higher inflation prove broken “the implications for inflation might not be large” at low levels of joblessness”. History may not repeat but it often rhymes, and I doubt very much that the leopard will change its spots.

I think what is extenuating about this cycle is certainly the extended amount of time we have seen without wage inflation, but the fact that cycle itself followed the GFC fallout, which in the US caused the greatest recession since the 1930s. The deeper the recession, the longer the recovery period and we have seen this phase play out over the past decade, but to rule out inflation occurring at some point in the cycle is fraught with risk in my view. History as shown that inflation tends to rear its head when markets least expect it. For this reason – amongst others – we continue to hold precious metal exposure across all our portfolios.

While gold has drifted lower, we have not seen a significant sell-off (in fact the market reaction has been very subdued) in precious metal equities – which is telling. Below is a chart of GDX – the Van Eck Junior Gold ETF, which continues to converge within a multiyear triangle trading range that typically precedes a breakout. I think the fact that the US PGM sector is under-owned and no longer responsive to what has been a mild move lower in gold, is revealing. 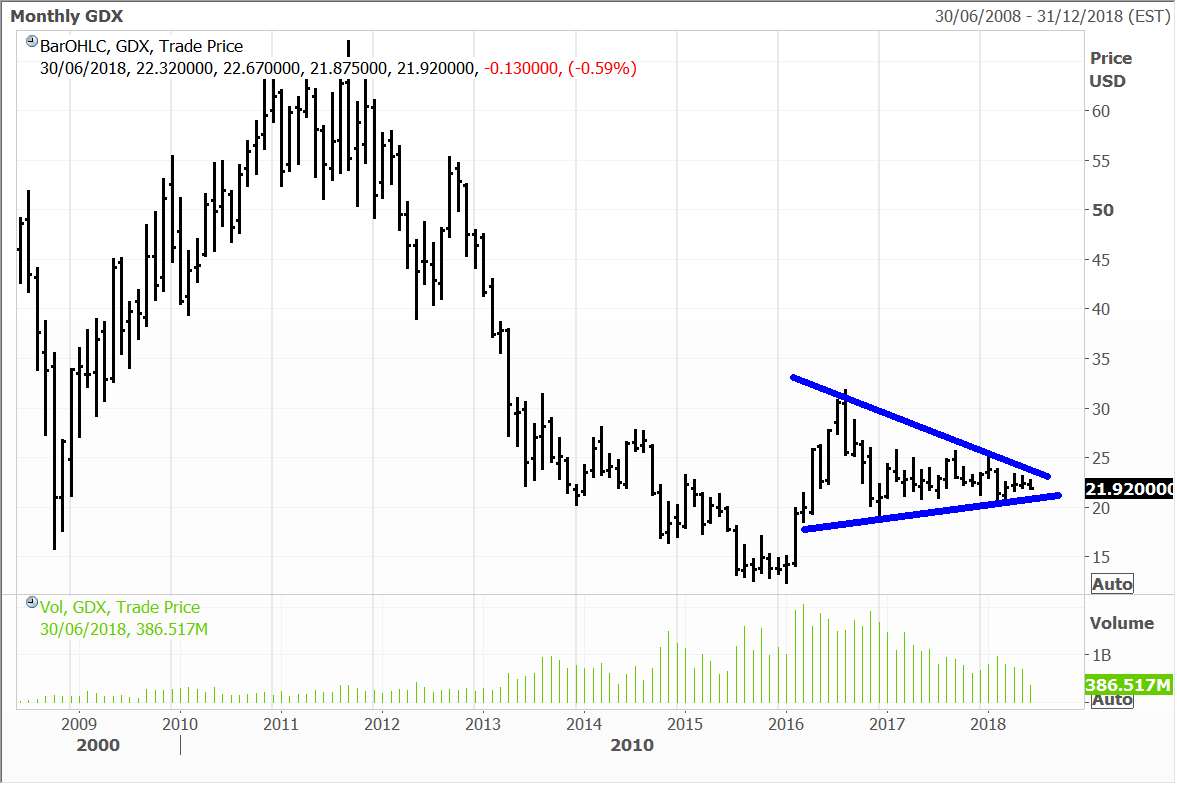 In other currencies such as the A$ and the pound, the PGM story is quite different, due to the recent strengh of the US dollar. The chart below of the A$ gold price explains why Australian gold producers such as Evolution are trading at or near all time record highs. If we are correct on the A$ falling to 70 cents (or indeed a major reversal to the upside in the US$ gold price), then the A$ XAU is headed for a “signficant breakout” above $1800 to make new record highs.

On the corporate front, the big news was Walt Disney stepping up to the plate with an amended higher offer for a raft of Fox’s coveted media assets in play, with the offer including a cash element. The $71.3 billion offer tops Comcast’s $65 billion bid made earlier this month and is much higher than the $52.4 billion that Disney agreed on with Fox last year. Fox stated the Disney deal is superior to the Comcast bid and agreed to the sweetened offer. Fox shares rose 7.4%, Disney shares advanced 1% and Comcast added 1.8%.

Software titan Oracle was another large-cap having a tough day of it on Wednesday, falling 7.4% on weaker-than-expected earnings projections for the current quarter, even though sales and earnings beat expectations. Shares of Chinese search giant Baidu stabilised, ticking up 0.7%, while casino operator Wynn Resorts added 1.2% and online real estate portal Zillow advanced 2.2%.

Video game exposures Sony, Nintendo and Square Enix advanced 1.5% to 1.9%. Robotics leaders Fanuc and Yaskawa Electric gained 1.2% and 1.7% respectively. At the opposite end of the spectrum, the megabanks Mizuho, Sumitomo and Mitsubishi UFJ slipped 0.5% to 1.1%.

In Hong Kong, ZTE Corp shares surged 20% as the share price see-saws on prospects of will it, or won’t it get relief from US authorities. Lens maker Sunny Optical, which has ZTE as a customer, edged up 1.2%. Oil and gas major CNOOC gained 2.6%, while the Macau casino operators Sands China, MGM China and Wynn Macau recouped some ground lost the day before, rising 1.4% to 1.7%.

The House of Mouse returned to the fray on Wednesday, raising its price and throwing in some cash in a bid to acquire a collection of highly sought after 21st Century Fox assets. Disney’s $38 per share offer amounts to a valuation of approximately $71.3 billion in cash and stock, marking a jump from its earlier agreed on price tag of $52.4 billion and topping Comcast’s roughly $65 billion all-cash bid. Since Disney is also taking on about $13.8 billion in debt, the enterprise value of the deal is about $85.1 billion (assuming no tax adjustment).

Under the terms of the new proposed transaction, Disney will pay Fox shareholders roughly 50% in cash and 50% in stock. Based on those terms Fox shareholders would end up owning about 19% of the combined entity. In a news release Fox has said the new Disney offer is “superior to the proposal” from Comcast earlier in June and has agreed to the sweetened offer.

I have long said Disney was the more logical home for the Fox assets and that they would further boost the appeal of its upcoming direct-to-consumer family-oriented streaming platform to be able to compete with the likes of Netflix and Amazon Prime.

Disney CEO Bob Iger commented on this saying, “At a time of dynamic change in the entertainment industry, the combination of Disney’s and Fox’s unparalleled collection of businesses and franchises will allow us to create more appealing high-quality content, expand our direct-to-consumer offerings and international presence, and deliver more personalized and compelling entertainment experiences to meet growing consumer demand around the world.”

The higher price tag has reduced the initial economic value uplift for Disney, but the company still expects it to be accretive from the second fiscal year after the closing of the transaction. At least $2 billion in cost synergies are expected to be extracted by 2021 and Disney certainly has an edge on this side. Disney is also some way down the path to regulatory approval, with six months’ work towards that goal completed since the earlier deal was agreed upon. Disney is a top 10 holding in the Global Contrarian Fund.

Which direction is Disney going to breakout from the multiyear converging triangle range? 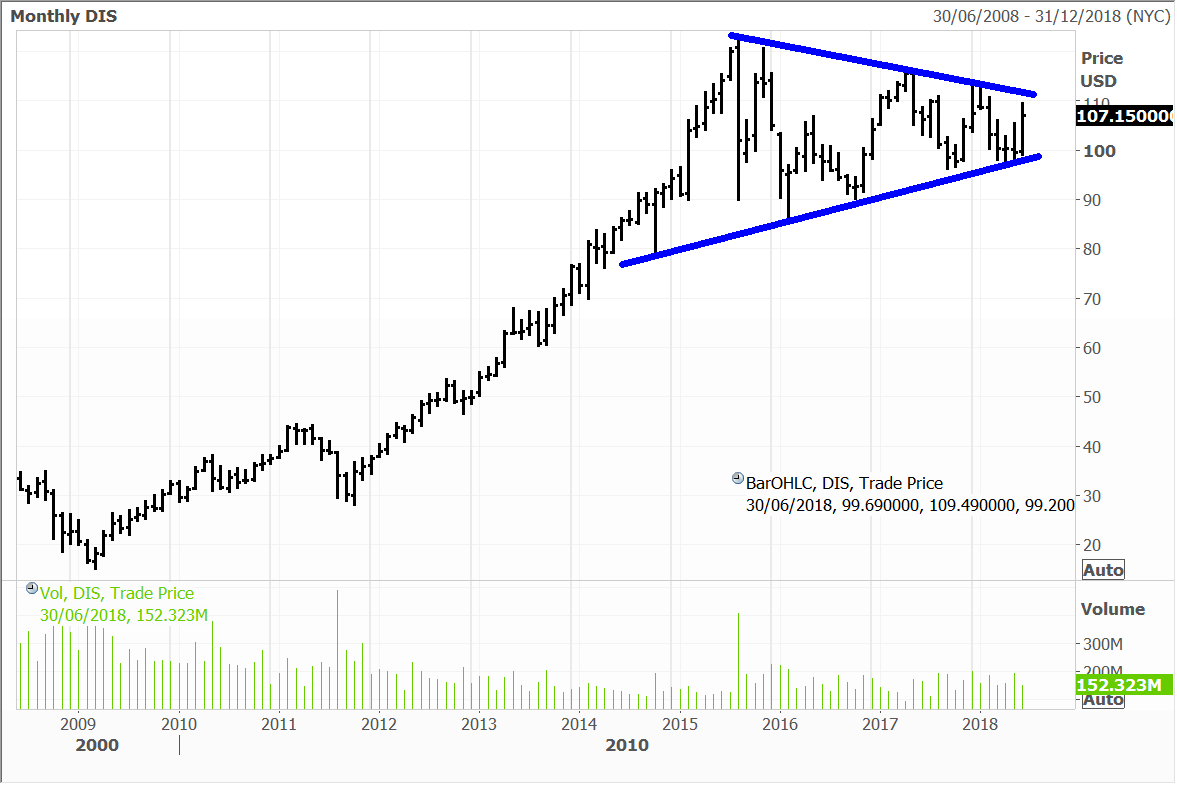