US equity markets were close to flat on Thursday with the S&P500 and Nasdaq in the black and the Dow Jones down 0.37% after the record highs established on the previous day. The big development for the day however was the ongoing ructions in the Treasury market with the yield on the 10 Year Treasury climbing above 2.6% for the first time since March last year. What’s more, the US dollar (which should benefit from rising interest rate differentials) failed to hold onto he previous day’s gain. Significant events with significant ramifications.

I have written in these notes on many occasions for bond yields – not just in the US – but globally, to break out this year and begin a secular bear market. I think this secular bear market in bonds has now started and we are going to see a much higher yield curve in the global bond market by the end of this year.

The fact that 10 Year US T bond yields have climbed above 2.6% is significant in that the resistance that was tested and probed this time last year is finally giving away. I wrote a lot about the multi decade bull market in bonds not rolling over without a “big fight” last year. This scenario is now playing out and the bond market bull that is nearly four decades old is fattened and ready for the slaughter. This is going to have significant implications for financial markets. 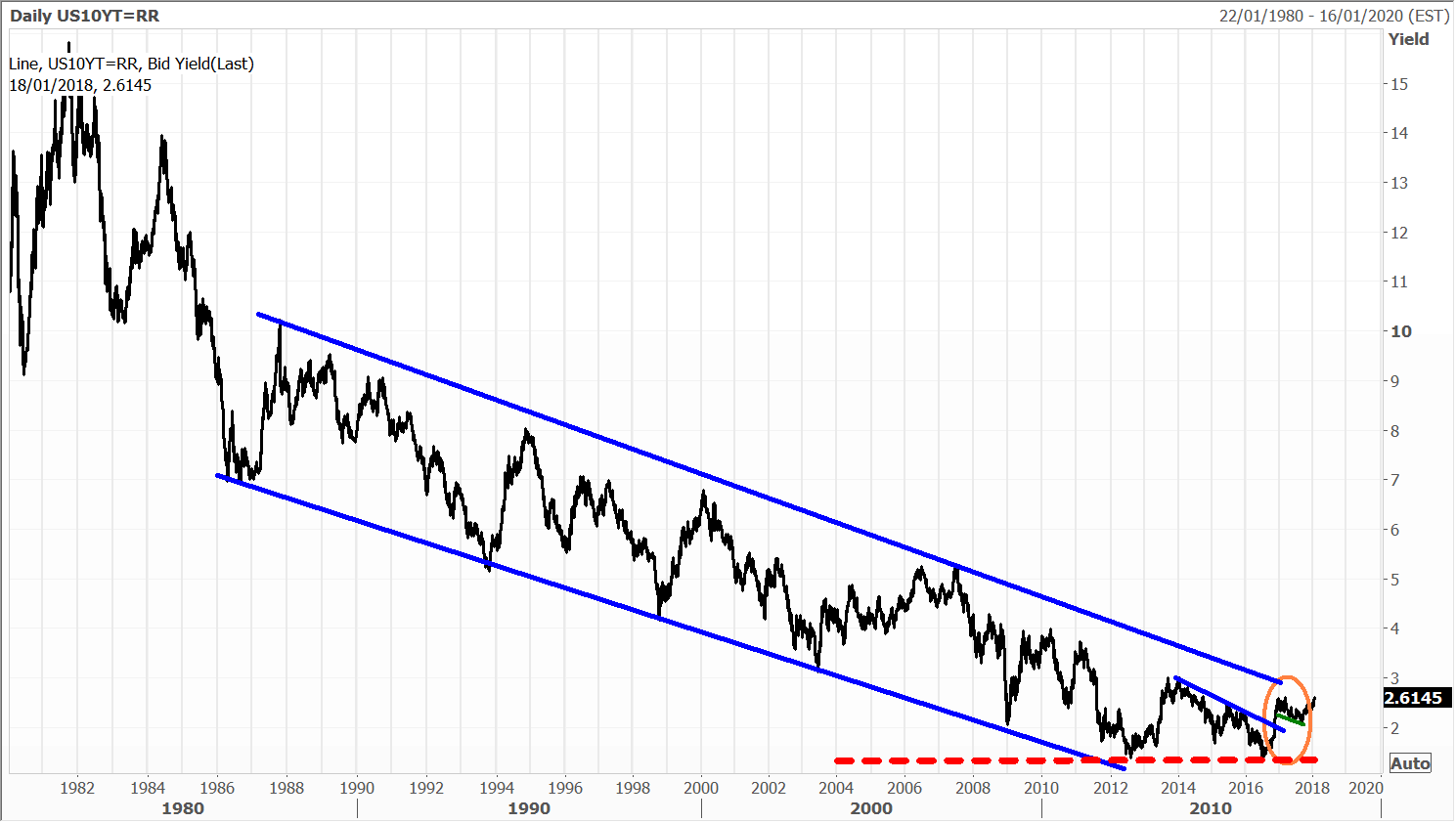 In Australia the market was relatively flat on Thursday, with the ASX200 closing the session at 6014. The resource sector was higher, on the back of another fairly solid production update, this time from BHP. South32 though was on the receiving end, down 2.6% after a broker downgrade from Credit Suisse.

I outlined my positive view on South32 in yesterday’s note, and safe to say I remain highly positive on the stock. This week’s production update was solid, with the performance in the manganese unit highly encouraging. On the other side commodity price strength will be driving the bottom line, and if anything, the risk is to the upside in my view. Many brokers are on the other side, and are remaining relatively conservative in their forecasts.

I was similarly heartened by the production update from BHP Billiton, despite the company reducing full year coking coal guidance, and lagging slightly on some targets. CEO Andrew Mackenzie expects the pace to pick up though, and that ‘The momentum we’ve built across the wider portfolio during the second quarter will flow through to an expected stronger second half operating performance,’ The company expect output from the broader portfolio to be 6% higher in fiscal 2018. 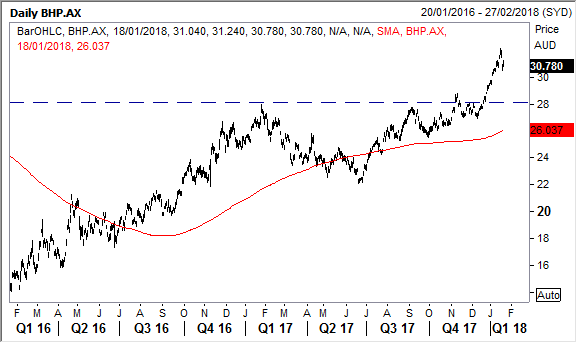 I think the outlook for BHP on the production front is looking robust with a number of significant projects up and running and starting to bear fruit. An expansion at the

Escondida mine in Chile (the highest producing copper mine in the world) is one example. The mine saw copper production rise 17% on the previous three months to 315,000 tonnes, which was some 34% higher than a year before. Achieved copper grades have also been rising.

Copper is one of the many bright spots for BHP, and is set to be the biggest contributor to Mr Mackenzie’s “latent growth” strategy. In Australia the company is also pushing ahead with the expansion at the Olympic Dam mine. The case is certainly there, with management having previously noted that it would take 500 years to deplete the deposit at the current rate of mining.

The outlook in the core iron ore division is also strong. Management are confident that the company can achieved record annual output of between 275 million and 280 million tonnes in fiscal 2018. As I have noted in the dailies this week, the big story for high quality producers in the sector are robust commodity prices. These against the backdrop of steady and rising production are going to continue drive cashflows, and ultimately share price performance.

It is a similar story for the energy sector in my view (and in fact BHP itself is effectively an oil major given the size of its petroleum division). Woodside was lower yesterday after its fourth quarter numbers, but the issue was clearly weaker production. Revenues fell 6.9% on a year ago to US$939 million for the fourth quarter, but were higher than the previous three months.