It was all about the FANG stocks on Friday. The Nasdaq led the US stock market sharply higher after strong profit results from Amazon, Microsoft and Alphabet, which pushed the index for a 2.2% gain. The Dow Jones and S&P500 also finished positively lifting 0.14% and 0.81% respectively. Apple rallied after stating that demand for its new iPhone X was “off the charts.” Demand exceeded initial supply within only 10 minutes of pre-orders going live on Friday, despite the relatively high price tag for the phone. Apple rose 3.58% after allaying the “market’s concerns”.

Volkswagen has spent €14.5bn this year resolving the diesel scandal but still has a cash balance of €25.4bn. Revenue in 2017 is expected to be 4% higher than in 2016 and deliveries in the first three quarters were up 2.5% on a year ago. We hold Volkswagen in the Contrarian Fund and our European portfolio. 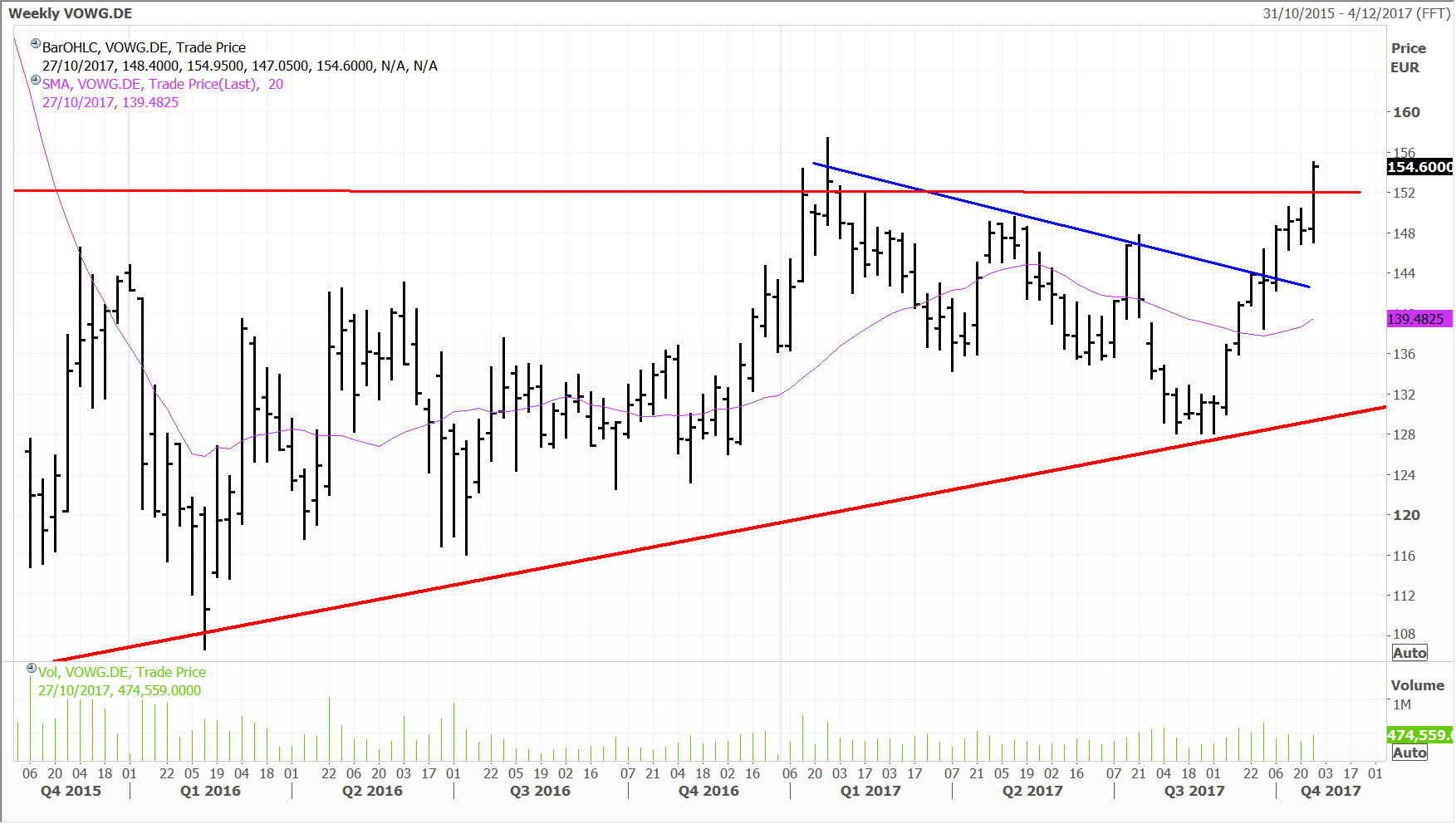 Chinese online search giant Baidu delivered strong year-on-year growth on the top line in third quarter and net profit more than doubled, helped along by the sale of its food-delivery business. The company forecast fourth quarter revenue to be in the range of RMB 22.23 billion to RMB 23.41 billion, marking year-on-year growth of 22% to 29%. Excluding disposed businesses to provide an apples-to-apples comparison the guidance represents growth of 28% to 34%. Although that is solid top line growth, the market was looking for more and the ADRs listed on the New York Stock Exchange slipped 8.15% in trading on Friday.

Looking at the how the company fared in the quarter and its trajectory looking ahead this seems an overreaction and we don’t expect the weakness to persist. Even after the pullback on Friday, the ADRs are up 45% year-to-date. Baidu is the biggest holding in the Global Contrarian Fund and is also a holding in the Global Opportunities, US and Asian portfolios.

Some of the shortfall in the revenue guidance is due to lost sales around the time of China’s Communist Party Congress, recently held, with President Xi Jinping again endorsed. It will soon be back to business for normal for online advertising sales. Besides its valuable core search advertising business, Baidu has emerged as a leader in artificial intelligence (AI) and its online video streaming platform, iQiyi, is the Netflix of China. An upcoming IPO should unlock some value for Baidu shareholders. 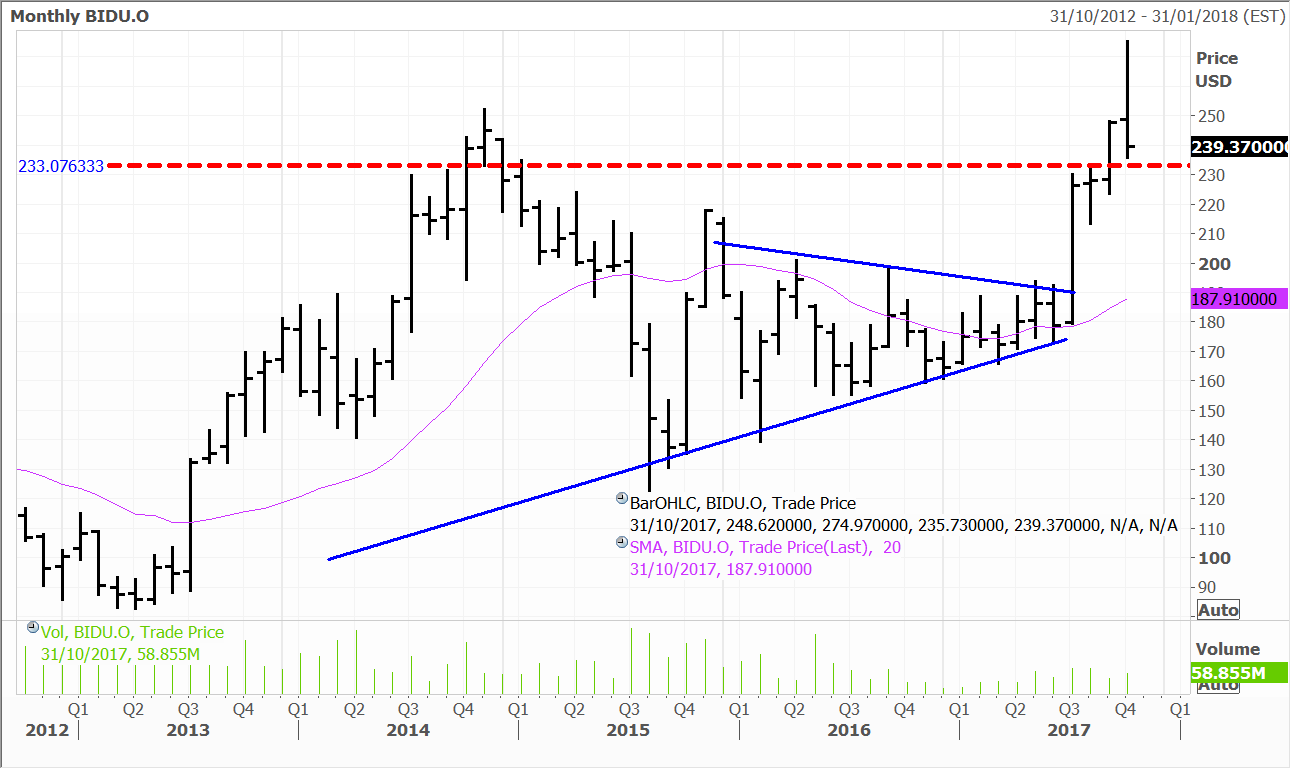 Total revenues in the third quarter came in at RMB 23.5 billion (US$3.5 billion), marking a strong 29% increase on a year ago and effectively in line with the Wall Street consensus estimate of RMB 23.6 billion. Positively, the company continues to strengthen its mobile business and revenue generated from mobile increased from 64% of the total in 3Q16 to 73% in 2Q17.

It was the third consecutive quarter of year-on-year growth after some weaker quarters in 2016 when the company faced two headwinds. The first headwind was the absence of a contribution from the online travel business, Qunar, which was deconsolidated from Baidu’s financial accounts in late 2015.

Although that weighed on the results for a while, with lower quality advertisers shaken out, the overall quality of the advertising business has improved markedly.

Online marketing revenues in 3Q17 were RMB 20.1 billion, up 22% year-on-year. Baidu has lost some marketing customers, with its 486,000 active online marketing customers in the third quarter down 7% from the corresponding period in 2016, but its remaining customer base are bigger spenders. Revenue per customer surged 31% to RMB 40,900. Another benefit of this shift in the customer mix is that traffic acquisition costs as a percentage of revenues have fallen from 14.2% in 3Q16 to 10.5% in the third quarter of 2017. 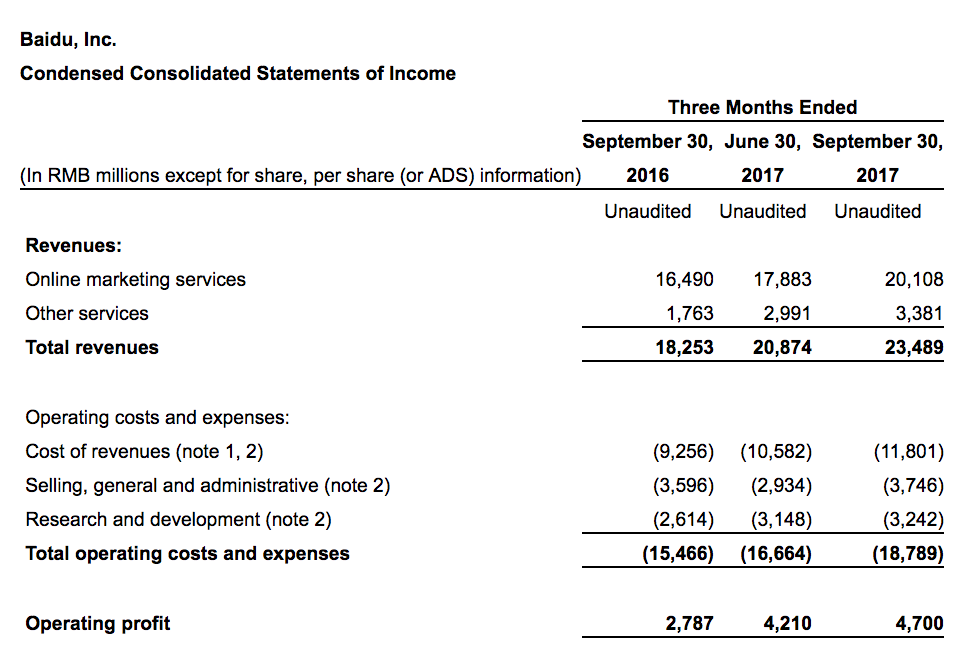 While most costs were well contained, a couple of expense lines increased materially. At RMB 3.9 billion, content costs were up 76% from a year earlier, with this mostly driven by investment in content for iQiyi. Research and development expenses of RMB 3.2 billion were up 24% year-on-year as the company invests heavily into AI. We can live with these costs increasing as we expect a substantial payoff down the track from both the video streaming business and numerous AI driven initiatives.

Operating profit hit RMB 4.7 billion (US$706 million), representing a surge of 69%. Net income of RMB 7.95 billion more than doubled (+157%) from a year earlier, boosted by RMB 4.23 billion of other income linked to the sale of Baidu Deliveries.