US stocks advanced once more on Thursday after a slew of positive earnings reports lifted the S&P500 and Dow Jones around 0.2% and 0.4% respectively. As we move through the third-quarter earnings season, Wall Street has been encouraged by the fact that 74% percent of companies have beaten expectations, which is a record and stands above the average beat of 72% for the past four quarters. Whilst earnings growth has moderated from what we saw earlier this year, profits have expanded by 5.3% and this has carried the market higher.

Coeur Mining lost around 10% after missing Wall Street estimates, citing a small net loss attributable to higher cash costs. The company announced today that it had produced a net loss of $0.09 per share on $176 million in revenue over the quarter, when Wall Street was forecasting a profit of $0.01 per share. Companies are clearly being rewarded for earnings beats – but not misses.

India’s Government has “bitten the bullet”, and after drip feeding the problematic SOE banking sector for the past ten years, has come out with a daring plan. Shares in India’s state controlled banks soared on Wednesday following the announcement from the Government of a $32bn recapitalization. India’s Government plans to break the circuit of nonperforming loans and bad debts that have plagued the larger SOE banks over much of the past decade.

The NPLs have effectively seized up the larger banks and prevented them from clearing out and removing the bad debts from balance sheets quickly. The Indian Governments recapitalization and capital transfusion aims to rapidly address this problem and allow the SOEs to focus once again on growth.

A proper recapitalization will effectively place the Government SOE banks on a more even footing with the private sector and allow more competition. Near term, all the SOE bank stocks are likely to continue to rally in what is the world’s fastest growing and most populous country.

Whilst earnings for the SOE banks will likely remain under pressure next year and into 2019 (as it will take time for the capital transfusion to positively impact balance sheets and drive growth) the sector is facing an earnings spike and sharp increase in return on equity further out. We hold ICICI Bank in the Fat Prophets Global Contrarian Fund and the Global Opportunities and Asian Managed Account portfolios, which has rallied around 25% this week on the Indian market.

India is a fast growing market for the sector where many people still have limited access to banking, even after a government drive that resulted in the opening of 200 million bank accounts in recent years. Banks can now sign up customers more quickly and cheaply after the introduction of a new national biometric ID system, for which the government has collected fingerprints and iris scans from more than 1 billion people.

Indian banks, like all Indian stocks, have also benefited from increased participation by domestic investors, as well as from inflows to equity-focused mutual funds as savers shift from traditional preferences for gold and real estate. 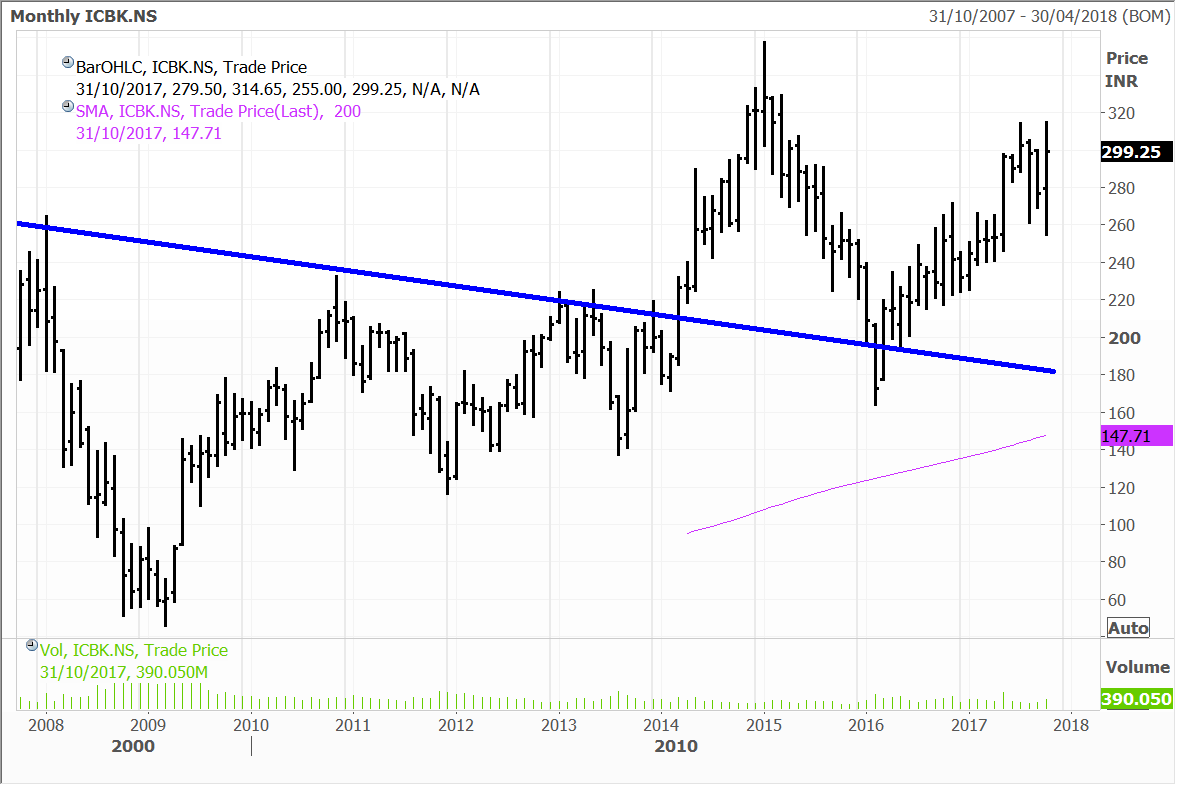 I wrote about the financial service platform stocks yesterday and OneVue was strong with a gain of 2%. Praemium leapt 7% to the highest level for nearly a decade at 60 cents. We continue to like the operating leverage story and thematic, but the shares have been on a tear, and probably need to take a breather. As our analyst team have also noted, patience needs to be exercised when buying as they are relatively thinly traded. 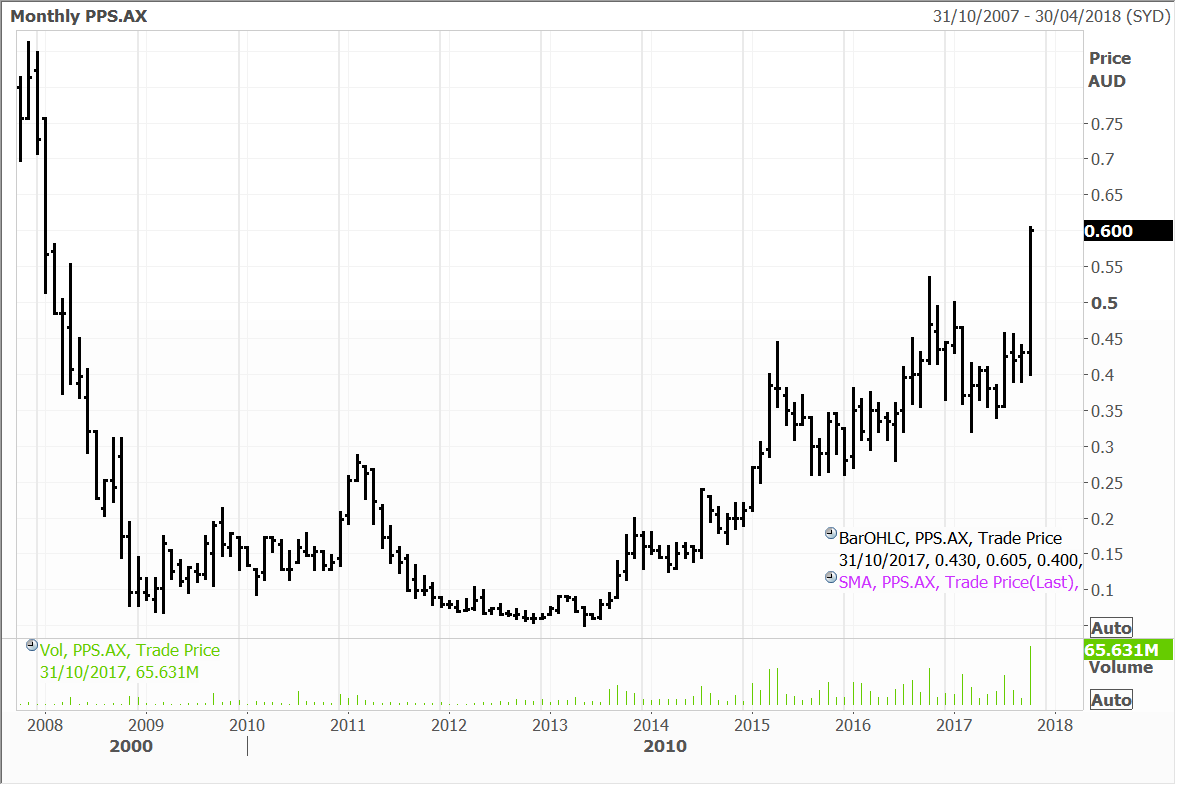 First Paris and now Sands is bringing London to Macau

Sands China opened its US$3 billion resort, The Parisian, in late 2016 and now its parent, Las Vegas Sands has outlined plans to spend another $1.1 billion renovating the Macau properties. This will include transforming the Sands Cotai Central into a London-themed attraction called The Londoner Macao by 2020. Sands China is a holding in the Global Contrarian Fund, along with the Global Opportunities and Asian Managed Account portfolios.

The game has been lifted in Macau with the opening of a host of world-class resorts in recent years and compared to the new resorts, The Sands Cotai is looking a bit dated. It has been a relative laggard performer for Sands in recent quarters and so is the logical choice for a refresh. Also in Macau, Sands will add new suites and rooms at its St Regis and Four Seasons properties and renovate VIP areas at the Venetian and Plaza Macau.

Macau is enjoying a strong rebound in fortunes, with September marking the 14th consecutive month that gambling revenue in the region grew year-on-year. Gaming revenue rose 16.1% year-on-year to approximately 21.36 billion (US$2.6 billion) patacas. And year-to-date Macau’s gaming revenue tally at the end of September of 193.38 billion patacas represented an increase of 18.8% from the first nine months of 2016. 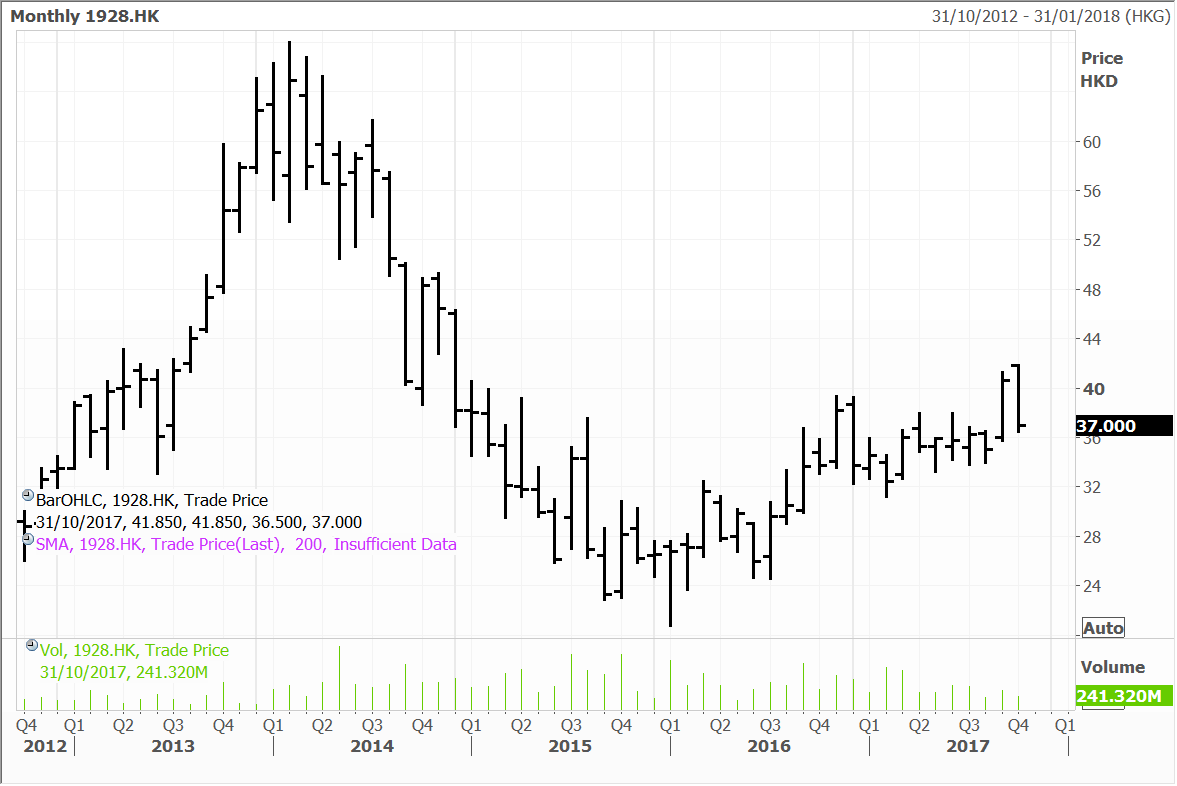 Numbers for the month of October will be out next week. Supported by growth in tourism from Mainland China and internationally, combined with the significant investment being made in the development of world class resorts in the region, we believe the recovery in Macau gambling revenue has much further to run.

Automation and robotics leader Fanuc reported strong second quarter results this week and upwardly revised full year guidance. Sales were up across the board, with a particularly strong surge in robomachine sales, used in smartphone manufacturing. Fanuc was up as much as 5% yesterday.

Japan-listed Fanuc shares are up 26% year-to-date and are a holding in the Global Contrarian Fund, along with the Global and Asian Managed Account portfolios. 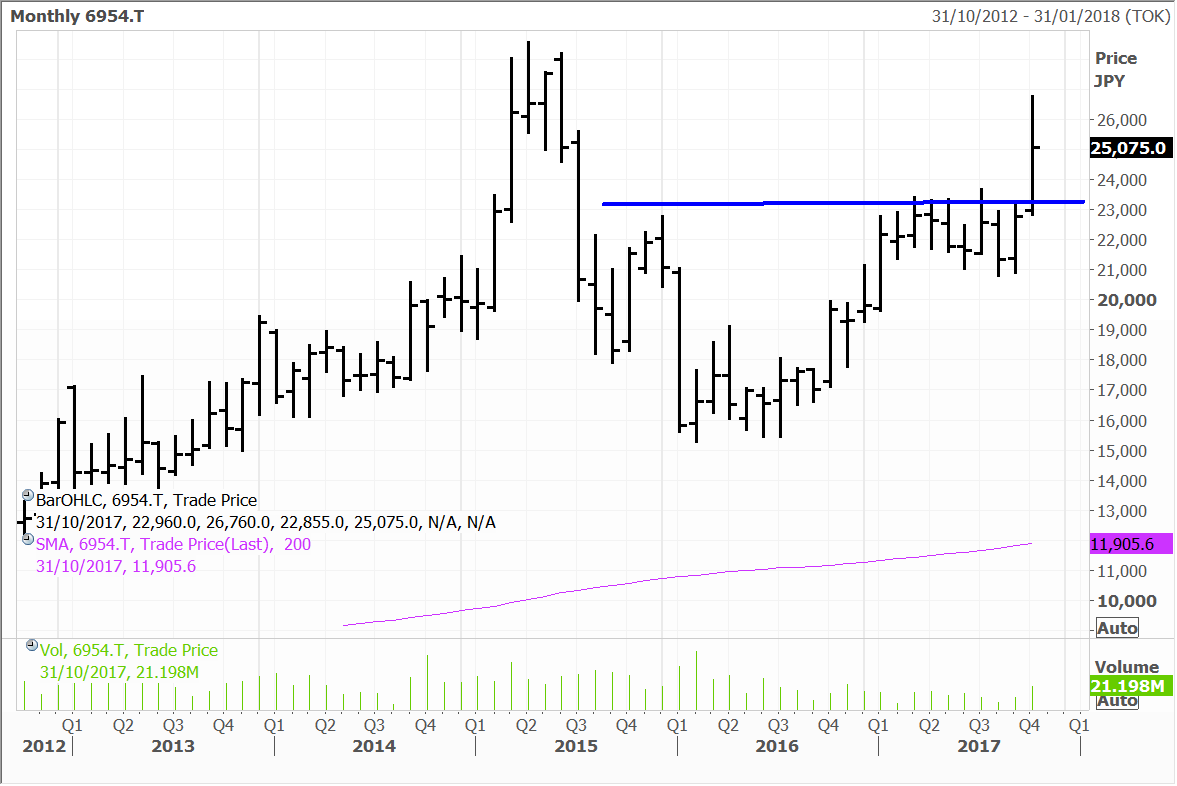 Second quarter sales came in at ¥179.1 billion, marking a 38.3% increase from a year earlier. The company leveraged this into a 55.8% increase in operating profit as its operating margin expanded 3.6 percentage points year-on-year to 31.8%. The operating margin has been recovering since hitting a low in this cycle of 25.0% back in 3Q16. Net income of ¥45.0 billion was up 50.1% from roughly ¥30.0 billion.

Fanuc benefits from some of the highest margins in its sector and generally posts higher margins than peers such as Yaskawa, ABB and Kuka.  In our view, Fanuc is a well-oiled machine with cost advantages helping maintain solid industry margins even when it endures periodic contractions in demand.  Fanuc practices what they preach by heavily using robots and factory automation (FA) in their own factories. 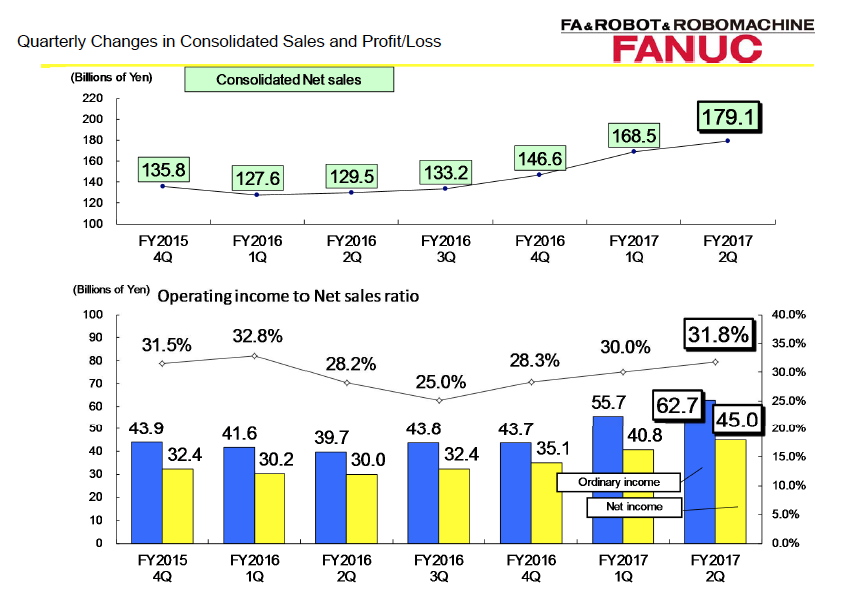 Factory automation (FA) sales of ¥56.4 billion were up 30.5% year-on-year. The machine tool industry, which is the primary market for Fanuc’s CNC systems in the FA division, enjoyed favourable trading in China, Japan and South Korea.

Robot sales increased 19.5% year-on-year to ¥55.1 billion, as sales were steady in Japan and remained favourable in the Americas, Europe and China.

The star of the show in terms of the percentage increase was the robomachine segment, which saw sales jump 116% year-on-year to ¥45.6 billion. Strong IT-related (largely smartphones) demand for the division’s products from Asia was primarily responsible for the jump in sales. The business primarily sells ROBODRILLS (small machining), ROBOSHOTS (electric injection moulding) and ROBOCUTS (wire-cut electric discharge) tools.

Even though it is a relatively small portion of group revenue, the Services unit is a steady performer for Fanuc. Some ¥22.0 billion in sales represented an increase of 15% year-on-year.

Services revenue is resilient and should grow steadily as the installed base of Fanuc machines around the globe expands. A new leg of growth for the segment could stem from the startup of Fanuc’s FIELD system (Fanuc Intelligent Edge Link and Drive), which has potential to take automation in factories to an exciting next level. The company is also proceeding with the application of AI (artificial intelligence) technology to its products.

Fanuc is now forecasting sales of ¥693 billion for the full year, marking a 29% increase over the prior year and a 13% increase on the prior guidance. Operating profit was lifted 23% from prior guidance to ¥209.1 billion, which would represent a 36% increase year-on-year.