A stronger A$ is also relevant to Mantra, and the shares were 7% lower on Thursday after Citi downgraded its recommendation from a buy, warning that the rising Australian dollar could have repercussions for the tourism industry. Citi expects FY17 earnings to come in at the lower end of the guidance range ($101 million-$107 million).

This point on the currency cannot be dismissed out of hand, and with Mantra having almost a quarter of its business in the tourist centric Gold Coast, and 13% in the Sunshine Coast/North Queensland. However, Mantra is not a US inbound tourism story. Versus currencies such as the yen, NZ dollar, and renminbi, the A$ has in fact been relatively stable – and these are Australia’s three largest inbound tourism markets.

I was up in the Gold Coast though this week, and can tell you the A$ at 80 cents against the US is not having an impact, and the place was ‘humming’. The region also has the Commonwealth Games on the horizon, and I expect the numbers to continue to swell from the three largest tourism markets.

Citi also cite the AirBnb threat, but that is an old line, and Mantra’s properties are well positioned in my view. Elsewhere, the company’s Sydney and New Zealand units make up more than 10% of the portfolio and are performing well. The Hawaii acquisition (now 6% of the portfolio) also looks a smart one, even if the currency will take some gloss off. 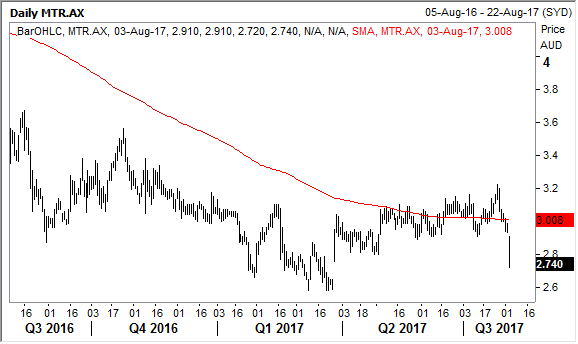