US equity markets edged further into record territory on Monday with the Dow Jones up 0.12% at 22,118 and the S&P500 closing 0.16% higher at 2,477. The Nasdaq continued to outperform with the index up 0.51% at 6,378.  Oil prices were lower on news that Libya’s biggest oil field has returned to normal following protests. The bigger diversified miners BHP and Rio were higher though in Northern Hemisphere trading as iron ore prices cracked US$76 a tonne after China vowed to limit steel output from November to March.

US equity market volatility has continued to moderate with the VIX index back below 10.  The 10-day rolling volatility of the S&P 500 has fallen to its lowest since February 1969 – a five-decade low – at only 2.43%. The low volatility ‘may’ be an indicator that investors are increasingly complacent with regard to risk. This is not least given that equity market valuations (notably the US) are high compared to historical averages. 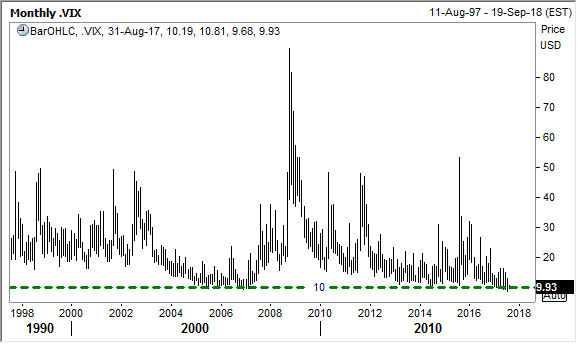 Shares in Tokyo listed Square Enix closed the session 6.8% higher in reaction to results for the June quarter.  Net sales improved by 11.3% on a year ago while profit increased by 57% versus forecasts for a 2.7% increase. We hold Square Enix in the Asian Equities model portfolio.

We also hold Sony, which has been restored to the JPX-Nikkei 400 index while Fujifilm, Nikon and Dentsu have been demoted.  The JPX-Nikkei 400 is an index of Japanese companies that are deemed to have good corporate governance. Sony is held in the Fat Prophets Global Contrarian Fund, as well as the Global Opportunities and Asian Equities Model portfolios. 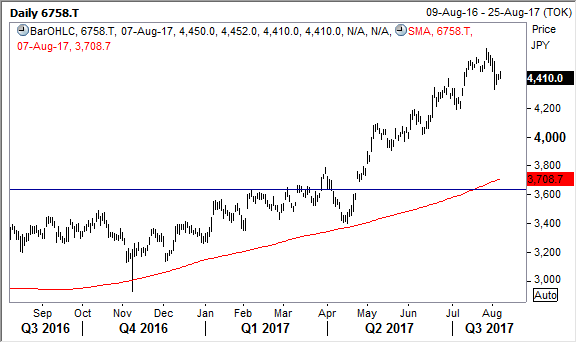 Mantra Group also had a strong day, rising 5.5% after the hotel operator announced the $52.5 million acquisition of the Art Series Hotel Group. The company struck a deal with the Deague Group for the management rights to seven of its Australian hotels, including The Johnson in Spring Hill. 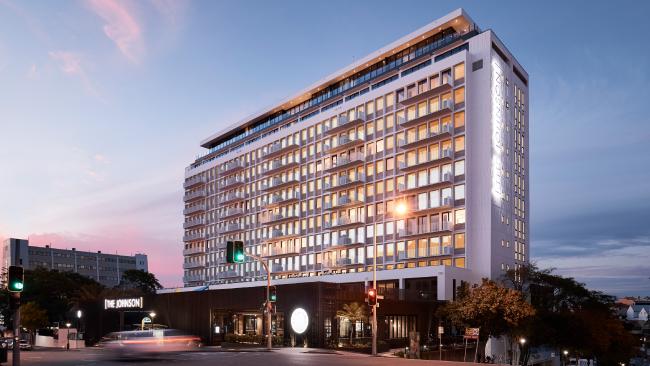 The deal will add more than 1000 guest rooms and a number of conference and event facilities, restaurants and luxury hotel-style amenities to Mantra’s portfolio. Mantra CEO Bob East said it was a ‘unique opportunity’ to increase the group’s footprint across Melbourne, Brisbane and Adelaide in a single transaction.

We hold Mantra in the Global Contrarian Fund as well as the Concentrated Australian Share and Small/Mid-Cap models. The transaction looks to be a good one, although a 5% rise in the share price is probably somewhat out of context, and more likely to an upgrade from Citi. What was curious about their buy call was that they had only downgraded the stock last Thursday! Their analyst team were pessimistic on the earnings result next week, and believed the Australian dollar could be a significant headwind. The backflip just two trading days later, on an acquisition that is accretive, but not a game changer, is almost ‘cowboy stuff’ in my view.

As I noted last week, Citi talk about currency strength as a headwind, but Mantra is not a US inbound tourism story. Versus currencies such as the yen, NZ dollar, and renminbi, the A$ has in fact been relatively stable – and these are Australia’s three largest inbound tourism markets.

As I wrote last week, I was up in the Gold Coast, and the A$ at 80 cents against the US is not having an impact, with the place ‘humming’. The region also has the Commonwealth Games on the horizon, and I expect the numbers to continue to swell from the three largest tourism markets. The Airbnb threat (which Citi also noted) is yesterday’s news, and Mantra’s properties are well positioned in my view. 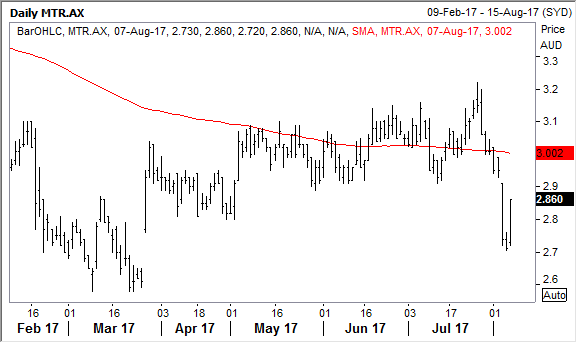