Shares of Nippon Telegraph and Telephone (NTT) Corporation, the former Japanese telephone monopoly, handily outpaced the Nikkei in trading yesterday, rising 2.5% against the Nikkei’s 0.5% gain. Yesterday, NTT announced that its Board of Directors has authorized another share buyback of up to 30 million shares of common stock to “improve capital efficiency and enhance shareholder returns.”

The aggregate repurchase amount is up to ¥150 billion (US$1.3 billion), with share repurchases able to begin from today through to 31 March 2018. That represents about 1.5% of the common stock outstanding, excluding treasury shares. As of 30 June 2017, NTT Corp had approximately 2.006 billion common shares outstanding and 89.93 million shares of treasury stock.

This comes not long after a December 2016 approval to buy back shares to the same amount in the period running from mid-December 2016 through to 30 June 2017. In mid-April, the company released a statement that up until that point it had repurchased 30.6 million shares for roughly ¥150 billion.

NTT (TYO: 9432, effective entry price ¥4,337.5) has picked up the pace of share buy backs in recent years and supplemented it with higher dividends. From the year 2000 through to the end of fiscal 2017 (March 2017), NTT spent over ¥3 trillion on share buybacks along, both from the market and the government. We hold NTT in the Fat Prophets Global Contrarian Fund. 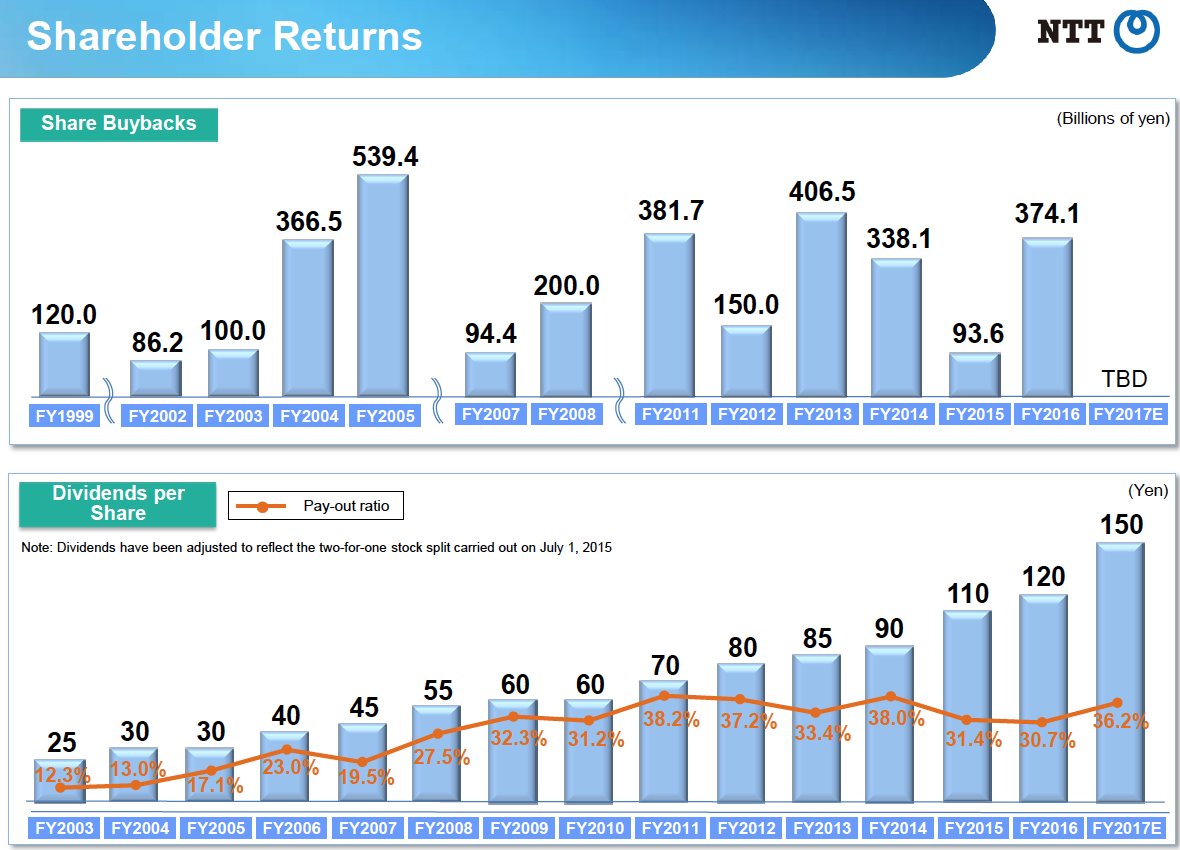 With the pace of appreciation in its shares having slowed over the past year, we could see more aggressive action from the company on this front going forward. Over the past 5 years the Japan-listed shares of NTT have outperformed the Nikkei 225 index, but have lagged over the past twelve months, as defensive stocks have fallen out of favour with the market somewhat.

Earlier this year NTT reported a decent, but unexciting set of numbers for its fiscal first quarter ended 30 June 2017.

Consolidated operating revenues increased ¥93.0 billion, or 3.4% year-on-year to ¥2,809.8 billion. By segment, the Data Communications business was the biggest positive contributor, adding ¥88.8 billion of revenue to the result. This was a significant contribution from the data business, reflecting NTT’s efforts to bulk up this relatively fast growing business organically and via acquisition.

Data was followed by the Mobile Communications business with a positive variance of ¥28.0 billion and the Long Distance and International business some ¥10.7 billion. The Regional Communications business dragged on group revenue to the tune of ¥15.1 billion and the Other Businesses segment, including adjustments such as accounting eliminations was a negative contributor by the amount of ¥19.4 billion.

NTT still faces a headwind from the decline in legacy fixed voice related service revenues due to substitution effects, but the drag on group numbers is fading.

Consolidated operating income edged up 0.9%, or ¥4.2 billion year-on-year to ¥491.6 billion in 1Q17. Looking at the key components, a slip in profitability at the Mobile Communication (NTT Docomo) business weighed on group operating income. At ¥277.6 billion in contributed operating profit, the Mobile business accounted for over 56% of consolidated operating profit in the quarter. It was down ¥20.7 billion, or 7% year-on-year as it faced a tough comparison from the prior year when earnings were strong in 1Q16. 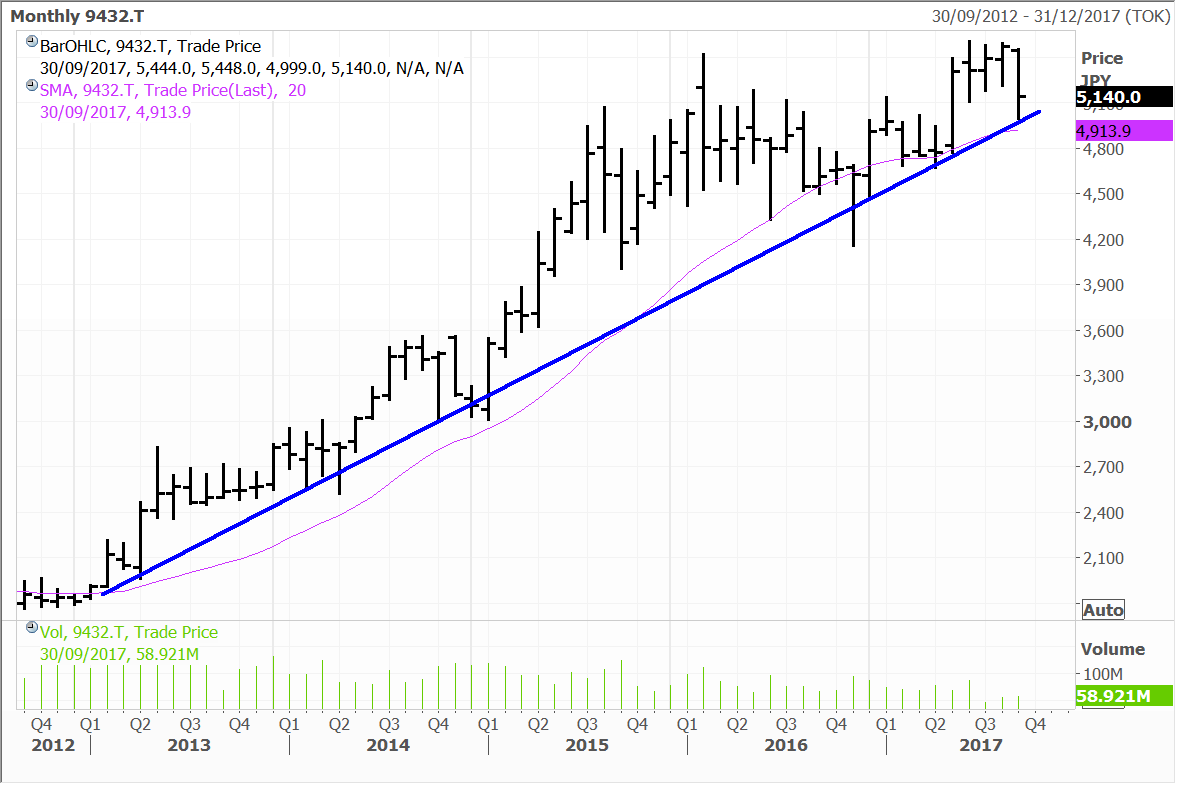 Some depreciation changes weighed on operating earnings for the mobile business and excluding these earnings were down a modest 2%. The underlying business appears solid, as some other investments in the long-term health of the business should pay off down the road. All other major segments provided a positive year-on-year contribution to operating income.

Moving further down the income statement and net income attributable to NTT for the period amounted to ¥271.5 billion.  This was an increase of ¥27.8 billion or 11.4 percent year-on-year. NTT’s bottom line was supported by an expense below the operating profit line in the year ago quarter that was not repeated and instead was a net positive in 1Q17. Earnings per share were ¥135.24, up 15.9% year-on-year, supported by NTT’s share repurchases.