The last day of May saw weakness in the US indices in reaction to the latest tariffs imposed on Canada, Mexico and Europe, but the indices finished firmly in the black for the month. For the month of May, the S&P500, Dow and Nasdaq added 2.2%, 1.05%, and 5.3% respectively, with the tech sector the standout in the market leading on the upside.

Dominating the news wire on Thursday was the US confirming that it would impose tariffs on aluminum and steel imports from Canada, Mexico and the European Union. This reignited market concerns that a global trade war could ensue as Europe and Canada stepped up with reciprocal threats.

However, unlike back in February and March, the stock market reaction was constrained and fairly muted. The markets have absorbed and recalibrated the overall risk of a full-blown trade war as being an unlikely outcome. The actual amount of commercial product effected by the tariffs is less than $10 billion between the US and Europe, so the overall impact is fairly benign. This was one of the reasons why the Nasdaq was only down 0.2% today.

The S&P500 continues to consolidate and build a base above 2,700. The June quarterly reporting season – due to get underway in about 7 weeks’ time – will likely provide the next impetus for market. The payrolls data due out later today will also be key. 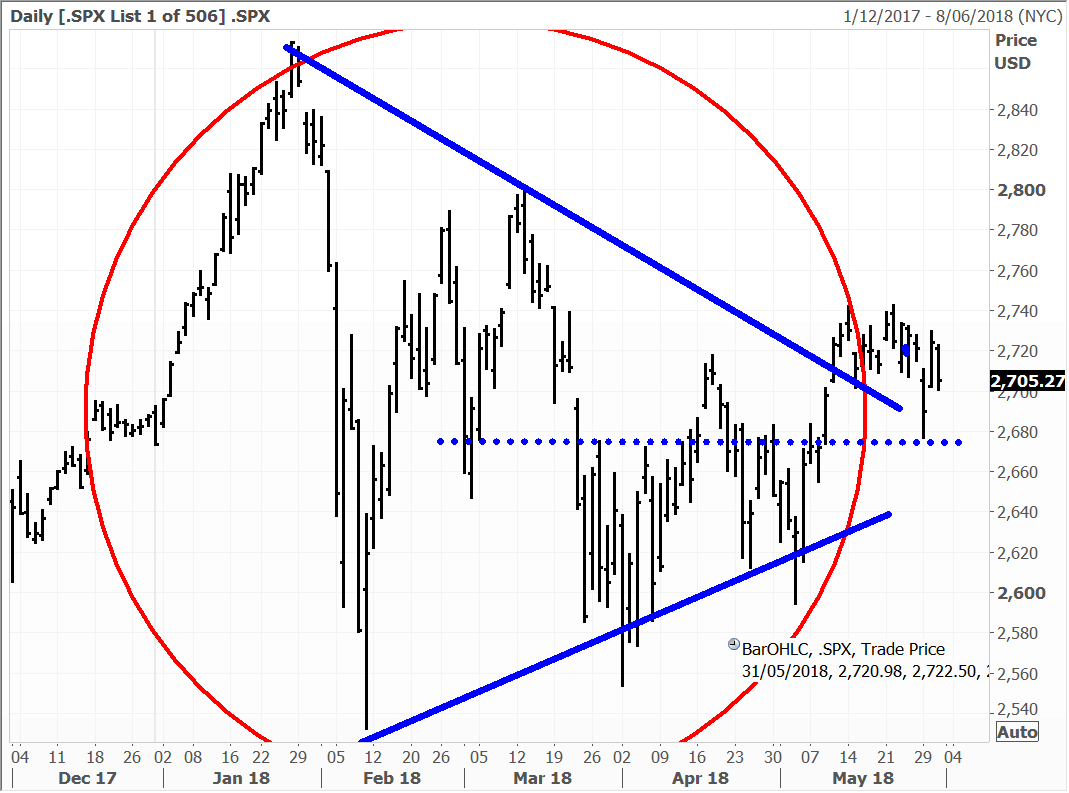 In corporate news General Motors (GM) shares jumped over 12% as Japan’s prolific investor Softbank Group decided to pump a $2.25 billion investment into its autonomous vehicle arm. Alphabet’s Waymo self-driving unit announced it will buy up to 62,000 minivans from Fiat Chrysler. Waymo has plans to launch a robo-taxi fleet in Arizona as early as this year. Shares of parent Alphabet closed 2.1% higher. Baidu, which has the leading autonomous vehicle project in China, ticked up 0.4%.

Spain’s benchmark IBEX index fell 1.05% due to the uncertainty for today’s scheduled no-confidence vote for Prime Minister Mariano Rajoy. There is a high probability that the Spanish prime minister will lose that vote. Sentiment towards automakers in Europe was dented by the tariff news, with Volkswagen declining 1.9%, although BMW held up well and eked out a 0.2% gain.

In Hong Kong energy stocks led the way to the upside and oil & gas supermajor CNOOC gained 2.5%. The Macau casino operators were also back on the front foot, with Wynn Macau, Sands China and MGM China advancing 2.4% to 2.9%.

In Australia, the market finished the month on a positive note, with the ASX200 rising 0.46% on Thursday to close at 6,011. Gains were driven by resource stocks, and the energy sector had a particularly strong session, with some doubts over to what extent big oil producing countries will ‘open the taps.’ We have held the view that self-preservation would prevail, and that oil prices will remain robust. Woodside, Oil Search, and BHP were well bid with gains of around 2% or more. South32 was similarly strong, while Rio put in a rise of 1%.

Chinese online search engine Baidu is reportedly nearing a new milestone in its autonomous vehicle quest, with a first batch of electric shuttle buses set to be produced from July in conjunction with local China partner King Long – a major commercial vehicle and bus maker in the country.

Baidu has said each bus will have room for 14 passengers, with 8 of them able to be seated and there will be no driver’s seat. To begin with the business will be only used in confined areas that are relatively easy to navigate, such as point-to-point routes in airports and industrial parks.

Baidu’s Apollo open source autonomous software will be the ‘brains’ directing the vehicle and this is where the big challenges lie, as the hardware that goes into the vehicles are easily manufactured. At the January 2018 CES show in Las Vegas Baidu took the wraps off its 2.0 version of Apollo, which had more than 90 industry partners at the time.

In March the Chinese government reportedly gave Baidu the green light to test cars on certain public roads in Beijing suburbs. By 2020 Baidu is planning to have Level-3 autonomous vehicles on the road, which refers to cars that can drive automatically at highway speeds and notify the driver to take over when needed. These cars are being developed in conjunction with partner Chery Automobile, also a Chinese company.

The race to self-driving cars is white-hot competitive globally, but Baidu appears to be the driver’s seat for the Chinese market, where the market opportunity is estimated to be massive as ride hailing continues to disrupt the taxi market. Baidu is a core holding in the Global Contrarian Fund, along with the Global Opportunities and Asian portfolios. 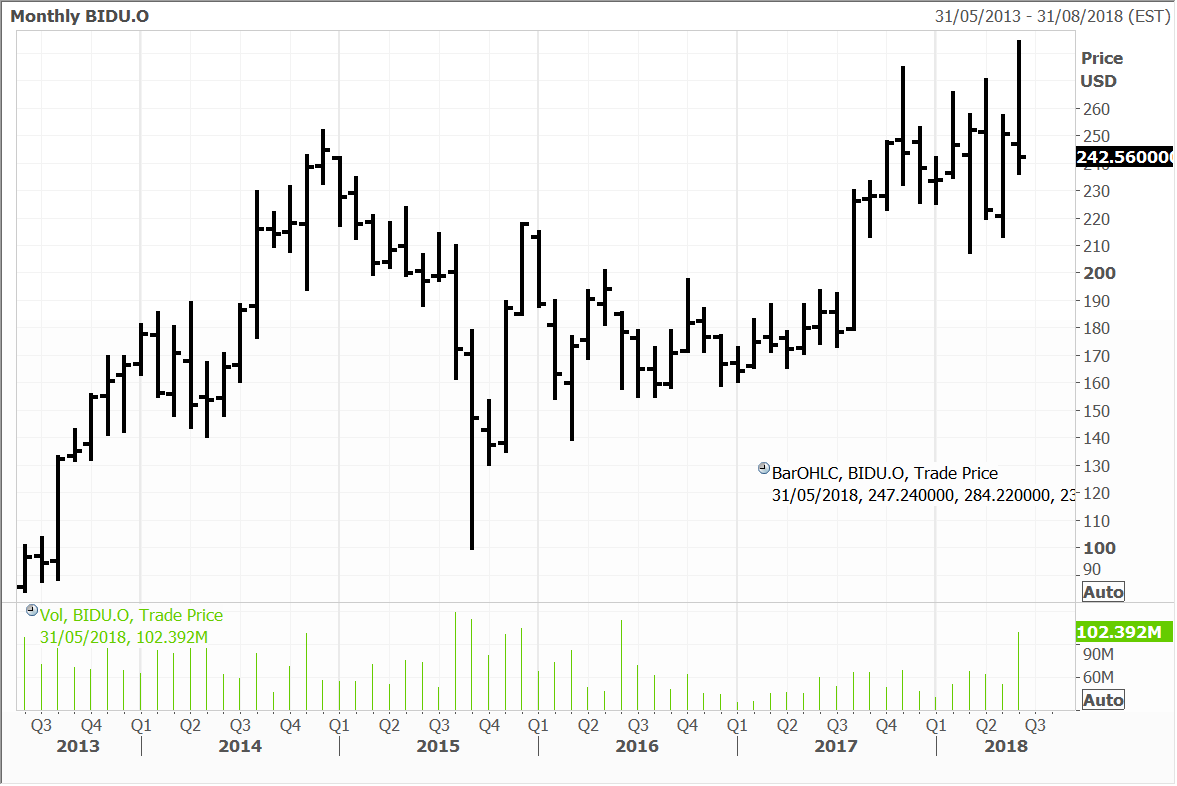 The deal with EMI made Sony the largest music publisher globally with the industry picking up momentum on the back of new steaming services like Spotify – where Sony owns a stake. Currently Sony is not picking up its game in Hollywood, where it is lagging bigger studios and where Apple, Amazon and Netflix are in a race to become leading streaming platforms.

“I don’t think we should aim to build platforms of their level or compete with them,” Yoshida told reporters last week. “A key pillar of our strategy is, how can we survive, how can we actually shift the turf.” That is good news for long time investors who have seen the company extract itself from loss-making projects in the past.

Moving to safer familiar ground is an extension of Yoshida’s numbers-based approach. Yoshida was previously the company’s CFO and is credited for turning around the electronics giant using cost cuts and focusing on apparently bland but highly profitable sensors.

The company recently also bought a 39% stake in Peanuts Holdings for US$185 million. The focus of the company is to leverage film rights of older franchises rather than spending on new movies and TV shows. For example, last year’s “Jumanji: Welcome to the Jungle,” which brought in more than $900 million surprisingly. Sony plans to release another instalment of the 1995 classic “Jumanji” in 2019. Sony is held in the Global Contrarian Fund and International managed account portfolios. 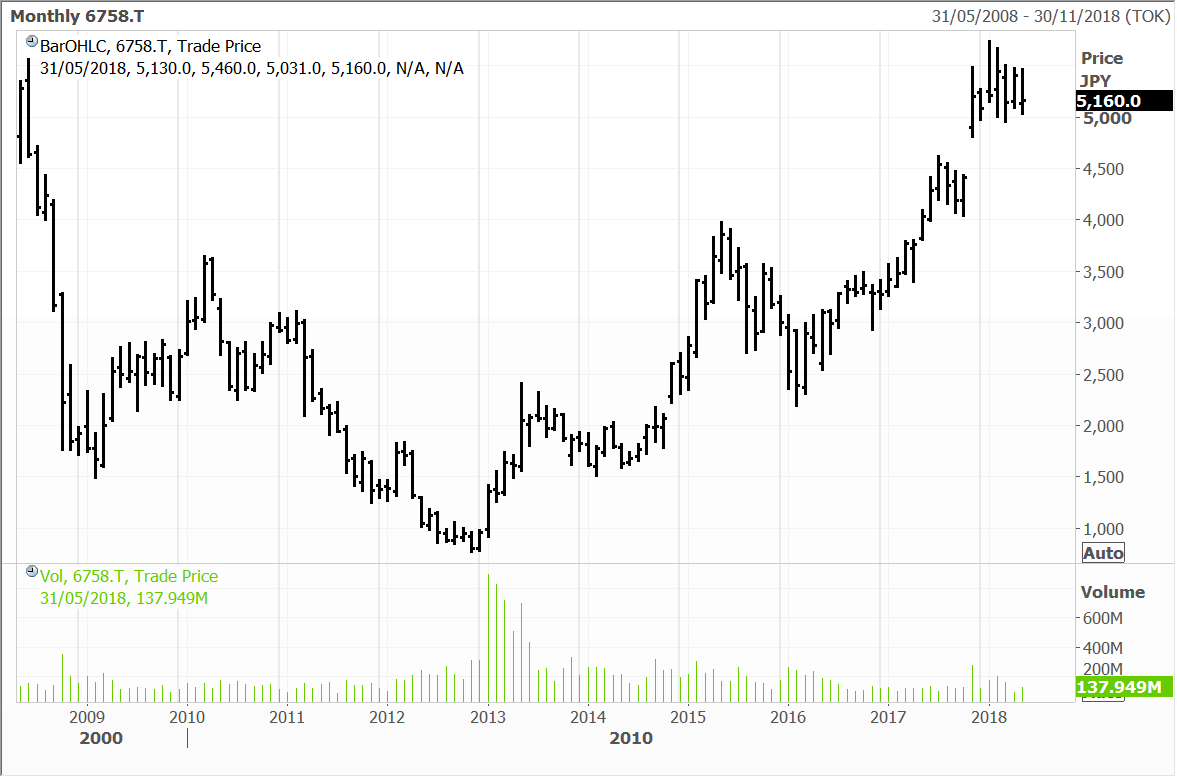