US indices were up sharply on Monday, marking the third day of a strong run of gains, as the reporting season concludes with the majority of S&P500 corporations notching up solid growth. The correction of a few weeks ago has given way to renewed focus on fundamentals by the markets and the fact that the economy and corporate sector are doing extremely well.

Driving Monday’s rally were investors looking ahead to this week testimony to congress by new Federal Reserve Chairman Jerome Powell. Expectations are that he will stick to a “gradualist softly” approach of predecessors in terms of monetary policy trajectory and the three rate hikes planned for 2018 (we are on record in calling four rate hikes this year).

Mr Powell faces questions from both houses of the US Congress in a semi-annual testimony starting later today, which will be closely scrutinized by the markets. The inaugural speech of any new incoming Fed Chair can typically be expected to be very much benign. The last thing Jerome Powell will want to do on Tuesday is risk “rocking the boat” or making some faux pas comment that spooks the markets.

Powell’s speech will likely be guarded and err on the side of caution which I expect the markets to take well. We can expect him to talk about inflationary pressures, but again, he will be cautious in his assessment here. The US 10-year Treasury yield eased to 2.85% and as I highlighted yesterday, I see the further downside in the near term as the yield tests the breakout level. But I don’t expect the resistance level of 2.6%/2.7% to be pierced anytime soon on the downside, which is now effectively a significant base of support – see below. 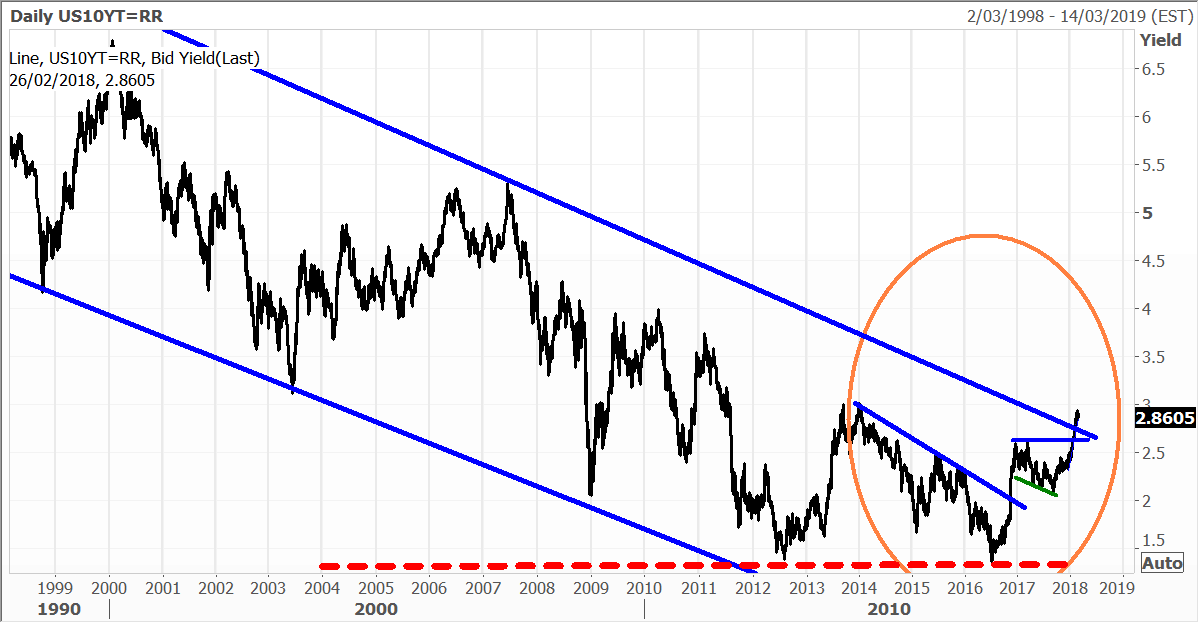 Buying back the farm.

Berkshire Hathaway gained 3.22% after Warren Buffett said his conglomerate, which is sitting on $116 billion of cash, is “more inclined” to repurchase stock than pay dividends as a means to use excess cash.

This is the first time I have witnessed Warren Buffett discuss buybacks. Berkshire typically has held onto a cash mountain with the objective of “deploying liquidity into a market purge”. Buffett has done this successfully for decades. Either he does not see the market coming off much in the medium term (or therefore there is nothing to race out and buy) or at 87 he is just getting old. I am inclined to believe the former, and he discussed the lack of buying opportunities at length in what was a short annual letter to shareholders on Friday.

Telecom stocks were strong in early trading and shares of technology company Hewlett Packard Enterprise were extending gains from the prior session after reporting better than expected fiscal first quarter numbers, raising its dividend 50% and providing an optimistic outlook.

Shares of one of the world’s biggest video game companies, Activision Blizzard were again in the green and closing in on all-time highs on optimistic reports of the growth opportunity in eSports. Apple shares tacked on another 1.9% in early afternoon trading and Walt Disney was riding a wave, up 1.5% early afternoon as its newest Marvel movie impresses at cinemas. Walt Disney is held in the Global Contrarian Fund, Apple in the Global Opportunities managed accounts portfolio and Activision Blizzard in the North America managed account portfolio. Another video game developer, Take-Two Interactive, recommended by the US research team, was up 2.6% at the close.

The European markets closed out the first day of the new trading week with modest gains. They began positively but soon drifted into a sideways trading pattern in the afternoon. It seemed traders were taking a wait-and-see approach ahead of a significant amount of economic data to come later in the week.

The pan-European Stoxx 600 edged up 0.51% for the day, while the Euro Stoxx 50 index of eurozone blue-chip stocks increased 0.65%. The resources sector was an early gainer due to a modest dip in the euro versus the US dollar and gains in Chinese steel futures following reports that the city of Tangshan might extend output curbs from March through to November.

Volkswagen shares edged up 0.8% after reportedly settling a lawsuit in the US over its software that concealed diesel emissions. There are still more trials on the docket, but Volkswagen has most damages in the rear-view mirror. Heineken rose 1.2% in trading in Amsterdam. Food group Danone was a solid performer in Paris trading, rising 2.3%. Volkswagen, Heineken and Danone are held in the European managed account portfolios.

In political news, a majority of delegates at a party convention in Berlin gave the go-ahead to a coalition agreement between the SPD and Angela Merkel’s allies, while Italy readies for a general election in a few weeks’ time.

The FTSE 100 advanced 0.62% Monday, as the sharp sell-off at the beginning of the month began to fade in traders’ memories and markets settled down. Miners were among the strongest performers in London, with the likes of BHP Billiton up 1.7%, Fresnillo gaining 1.6% and Randgold Resources advancing 1.3%. All three stocks are held in our managed account portfolios.

Asian stocks started off the week on a positive note Monday, with the major indices closing higher as oil prices gained and the Federal Reserve’s monetary policy report issued Friday suggested only a gradual pace of interest rates increases in 2018.

The benchmark Nikkei climbed 1.19% to a near 3-week high, with most sectors chalking up gains. Japan has lagged the bounce in the US indices, battling a stronger yen, but the stock market is showing signs of decoupling.

Sharp Corporation surged 4.0% on news reports it will set up a joint venture with a Hon Hai subsidiary. The big banks made modest gains, with Sumitomo edging up 0.2%, Mitsubishi UFJ gaining 0.5% and Mizuho up 0.7%. Entertainment and technology conglomerate Sony advanced 0.5%, while components maker THK gained 1.7%. Video Game developer Square Enix was a solid performer, advancing 2.0%. Energy company Inpex was up 1.0% and truck maker Hino Motors gained 1.3%. Sumitomo, Mizuho, Mitsubishi UFJ, Sony, Inpex and Hino Motors are held in the Global Contrarian Fund. Square and THK are held in the Asian managed account portfolios.

The Shanghai Composite was up 1.23% on the day, marking its sixth straight positive trading session. The Hang Seng index gained a modest 0.74%, following the lead from the mainland. Sentiment towards stocks in both was boosted by the proposal from the Communist Party’s Central Committee to remove the two-term presidential limit, which is likely paving the way for President Xi Jinping to extend his term.

Auto makers were some of the biggest gainers, with the likes of Geely Automobile surging 6.5% and Great Wall Motor up 4.6%. The latter company signed a letter of intent with BMW to make electric Mini cars in China.

Property and casualty insurance group PICC advanced 1.5% and oil and gas major CNOOC was up 1.2%. The Macau casino operators were mixed with MGM China shares down 1.7%, Wynn Macau slipping 0.7% and Sands China gaining 1.9%. CNOOC, MGM, Wynn and Sands are all holdings in the Global Contrarian Fund.

In Australia, the ASX200 reclaimed the 6,000 mark on Monday, with the index finishing 0.7% higher at 6,042. An easing of fears over aggressive US rate hikes helped sentiment, while demand for the banks accounted for half the market’s rise – there were gains of 1-2% for the big four.

Also, in the financials we had the result from QBE Insurance which saw new CEO Pat Regan deliver a full-year loss of US$1.25 billion. The combined operating ratio for 2017 increased to 104.1% from 93.7%. This was not unexpected, and indeed had been forewarned to the market in January. The decision to offload most of the Latin American business is also no great shock, and indeed I suggested last month that a big divestment was likely on the cards.

With an unprecedented number of severe natural disasters in 2017, and the worst year on record for the catastrophe insurance industry, the underwriting result was never going to be positive, or repeat the US$844 million profit from the year before. The company took a US$1.2 billion hit here, while also incurring write-downs in the order of US$700 million for goodwill and US$230 million on deferred tax credits relating to US tax cuts.

QBE has had more than a lost decade in terms of its share price, and the investment community can be “forgiven for giving up” on what has become a perennial basket case. I have said this before but I think QBE is close to an inflexion point, with downward momentum all but dissipated after a number of successful tests by the market of the $10 level.

Longer term interest rates are going to go higher which will benefit QBE, which has always been positively correlated. Pat Regan also knows that his window to write assets down and put through impairments has now closed and the market is now going to want results in terms of an operational turnaround. If all he does is deliver consistently, the market will like this and rerate the stock – which trades at a significant discount to international peers. The market has become accustomed to bad news and been conditioned by disappointment. Any positive catalyst could well take investors by surprise. 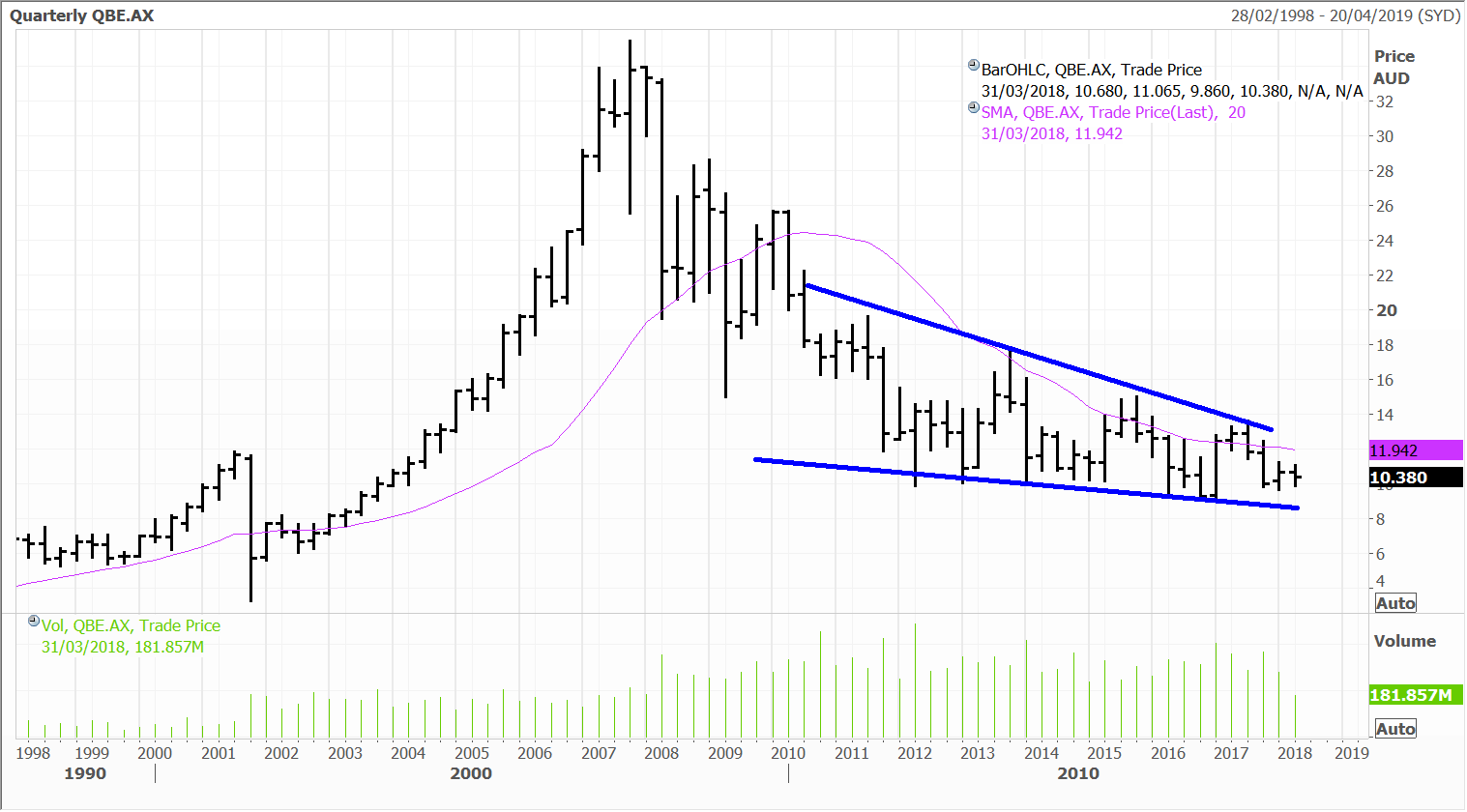 Yesterday’s result had already been flagged to the market, although investors chose to sell the fact, with the shares down 3.3%. Part of this was likely due to the reality of the final dividend being reduced to 4 cents per share from 33 cents a year ago.

I maintain the view however, that with the shares at depressed levels, the trading environment for the insurer will likely be more accommodative going forward. Natural disasters are difficult to predict, and a repeat of 2017 is possible, but not probable. The reduction in global capacity will drive premiums higher, as will inflation if our scenario plays out. A rising bond yield curve is also going to provide a major boost to QBE’s investment income.

Cash generation will also get a kick from the sale of most of the company’s Latin American business (Argentina, Brazil, Columbia, and Brazil) to Zurich Insurance for US$409 million. The company will register a US$100 million profit as a result and as Pat Regan notes will ‘simplify’ the group, reduce risk, and improve the consistency of results.

The company’s Australasian business is performing well, and there are certainly some ‘work-ons’ still for QBE with Asia and North America. However, I continue to see there as being more upside risk rather than downside at current levels. We hold the stock in the Global Contrarian Fund, and the Global Opportunities and Australian Concentrated Share managed account portfolios.

Walt Disney’s CEO Bob Iger announced a new app for sports channel ESPN by the end of March/early April. The ESPN App will have about 10,000 additional live sports events available in the first year. Mr Iger also confirmed plans to launch 4 to 5 original new series on the Disney platform. We hold Disney in the Global Contrarian Fund and the Global and US managed account portfolios.

Mr Iger also said that the takeover proposal for the Fox studio assets was progressing well in terms of gaining regulatory approvals. Disney is going to become a major rival to Amazon and Netflix in global TV streaming, but the market does not want to seem to recognise this yet, despite the huge back catalogue and portfolio of brands. Netflix has a market cap of in excess of $100 billion versus Disney, which is valued at around $160 billion and on a PE multiple of 16X. Should the takeover of Fox be approved, it could deliver significant value for Disney shareholders and make the combined company a formidable player in the fast growing global TV streaming industry. 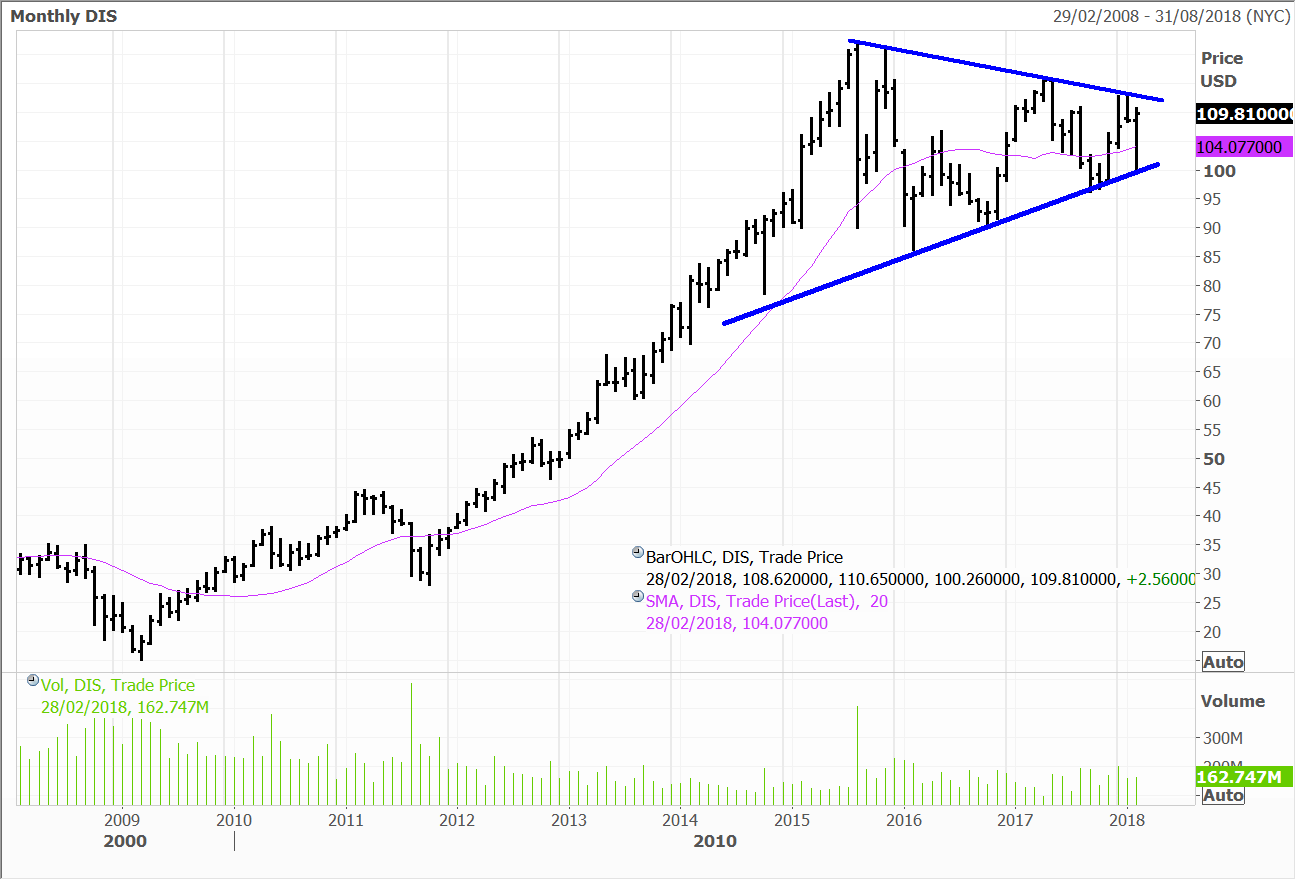