Japanese markets were closed on Monday for a public holiday while markets elsewhere in Asia made progress. The CSI 300 closed 1.19% higher at 3,882 and the ASX 200 closed 0.5% higher at 5,739. Mainland Chinese markets were open after a long holiday and had been up more than 2% at one point during the session.

A cut in the central bank’s reserve requirement ratio for banks a week ago had seen shares in Hong Kong rally. This did not help the Macau casino stocks which fell sharply after the long public holiday after visitor numbers were reported as being down on the previous year. The casino operators however have reported being fully booked out during the holiday season and we see the two-day slide (which began on Friday) as a correction and another buying opportunity.

Mantra Group and Select Harvests were both in the spotlight, with strong share price gains after the revelation that each had received takeover approaches. We hold both stocks in our WM models, and Mantra is a top ten holding in the Fat Prophets Global Contrarian Fund.

Accommodation operator Mantra was top of the boards with a 16.4% gain to $3.76 after the company confirmed it had received an indicative and non-binding proposal from Accor S.A. The proposed scheme of arrangement is pitched at $3.96 per share in cash, being $4.02 per share, less the final FY17 dividend that has already been paid, and including a potential special dividend. The offer is at a 23 percent premium to Mantra’s closing price on Friday, and values the business at $1.17 billion.

Mantra has granted Accor access to due diligence to determine if a transaction can be agreed. There is no certainty that an agreement will be reached or that the Proposal will be implemented. The deal would see the merger of the country’s two biggest hotel operators and would be subject to regulatory as well as other approvals.

Yesterday’s takeover offer for Mantra was the catalyst for a dynamic breakout from a multi-month trading range. 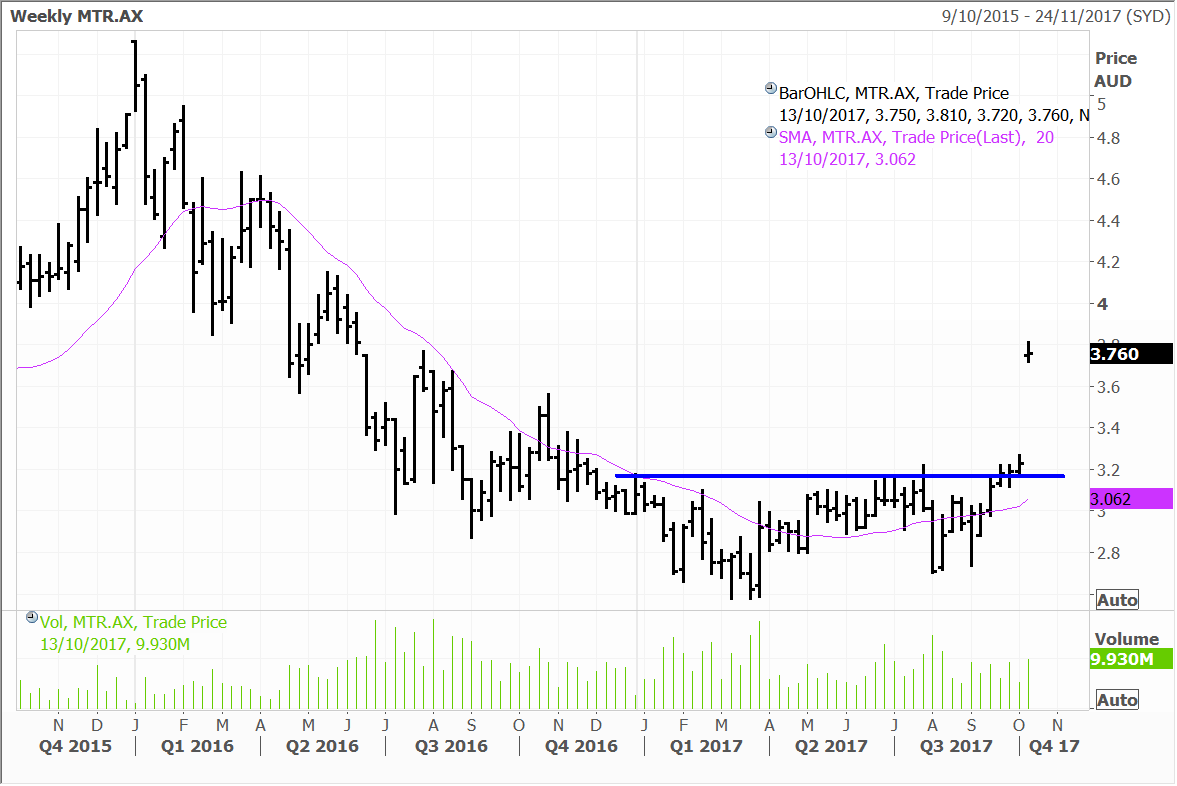 We were not surprised by the offer given the clear value which we believe exists in Mantra. We added Mantra to the Fat Prophets Global Contrarian Fund below $3, taking a high conviction view on the company’s value within a favourable industry as record inbound tourism numbers continue to grow strongly. We also hold the stock as significant positions in both the Concentrated Australian and Small & Mid-Cap managed account portfolios. Our analyst team has also issued a number of buy recommendations on the stock, with the most recent at $3.16 last month.

We have long said that Mantra represented strong value, and that fears by the wider market over the competitive threats of Airbnb and other disruptors were overdone. We also have suggested that many were ‘missing the point’ with respect to recent strength in the A$ versus the greenback. More of note has been the cross rates versus the yen and renminbi, the currencies of two of the company’s (and country’s) most important visitor markets (Japan and China), which have been relatively stable.

A strong full year result, and a rise in average room prices in the resorts segment provided us with further evidence that the threat of disruptors was overstated. The ability to implement pricing power also underlined Mantra’s high quality, differentiated offering and strong brand. It would seem Accor also concurs (and gets the point!). The record influx of tourists (which we have consistently highlighted) has also probably forced Accor’s hand sooner rather than later

We also are of the view that the price offered may not be the last. With Mantra now firmly ‘in play’, other competing offers may emerge. The industry globally has rationalised significantly this year. A deal was announced on Monday of the buyout of hotel chain Millennium & Copthorne, which values the group at around £1.8 billion. More rationalisation is on the way.

The offer though for Mantra is certainly good for the Fat Prophets Global Contrarian fund, and indeed highlights the ‘mantra’ of the fund which is to buy into high quality, but out-of-favour situations, where we believe the catalysts for a re-rating are compelling.

It is worth noting that despite FPC only having a very small number of concentrated holdings, and having only been listed 6 months, this is the second major conviction stock owned by the fund which has been subject to a takeover offer. This hopefully highlights our ability to assess hidden underlying value ahead of other market participants.