In Australia the market was fairly flat again, with the ASX200 finishing the session down 4 points at 5984. The banks edged lower as did the resources sector following a pullback in the likes of copper and nickel after a strong run recently. BHP Billiton was a drag on the index, losing 2% after what was a fairly innocuous update in my view.  The market should have a better performance today following the strength on Wall Street after Jerome Powell’s comments – the SPI futures are pointing to a 41-point gain.

With metal prices pausing for breath, the unit cost update from BHP set the tone for some selling in resource stocks. Management conceded that ‘inflationary’ pressures were rising, with higher oil prices and a strong currency adding to the headwinds.  However, they also expressed the view that unit costs at its Australian mines could be reduced by a further 10%. 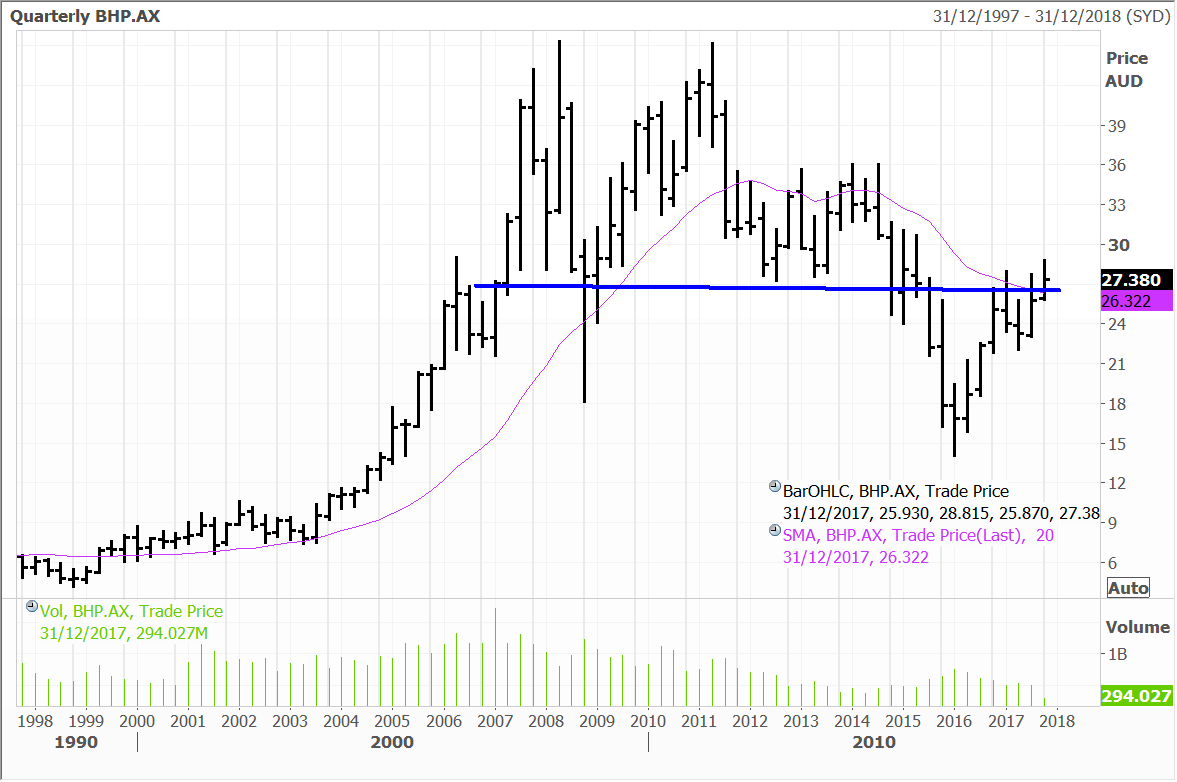 Mike Henry, who heads up operations for the Australian minerals division noted “We have been able to substantially reduce unit costs at our Australian mining operations over the last five years. But we have further to go. We can make ourselves safer and even more productive, and expect to lower our unit costs by a further 10 per cent over the medium term,”

I am not too sure why investors took fright, as if anything the remarks were bullish. As we are saying inflationary pressures are building, and this will ultimately be a circular loop back into higher commodity prices. Having learnt from the excesses of the past, exploration has been scaled back and there will be a significant lag in the event it were ramped up. BHP for instance is limiting capex to US$8 billion a year and is being very choosy about project ramp ups (although the Olympic dam has got the nod).

And on the other side BHP (and others) are bearing down on costs. Management expect that the company’s Australian mines will deliver 80% of the targeted US$2 billion in productivity gains over the next two years. The company also plans to get iron ore unit costs down to US$13 a tonne (from US$14.60 last year) which makes for uber-robust margins at current prices.

The reduction in exploration and investment is also a global phenomenon and in many ways makes a mockery of investment banks that claim that commodity prices are ‘too high’ or ‘unsustainable’ at the moment. This is not what large explorers are telling us, and clearly they need further price incentives. Across the Tasman, Anadarko has been the latest company to pull out of a major project – this has also seen spending on offshore drilling in NZ fall from NZ$700 million three years ago to nigh on zero. If anything this is all a leading indicator that we are in for much higher commodity prices.

Japan has been some of the strongest markets globally in 2017 despite the yen strengthening recently. Japan’s stock market seems to be decoupling from the yen, which is a sign of significant underlying strength. Investors have also shrugged off several scandals roiling several of Japan Inc’s big names and some persistent structural issues, including the often referred to aging demographic in Japan.

There are good reasons for the recent rise in Japan’s equities though, with GDP expanding for six straight quarters, the first time the economy has grown that long without a contraction in over a decade. Unemployment is at multi-decade lows, which bodes well for its leading automation and robotics companies such as Fanuc and Yaskawa Electric. Fanuc is held in the Global Contrarian Fund, along with the Global Opportunities and Asian portfolios. Yaskawa is held in the Asian Managed Account portfolio. They are also benefitting from the rise in automation abroad, including strong uptake in China.

Chronic wage and price deflation has eased in Japan, although the Bank of Japan would like to see stronger inflation flow through. There is growing demand for Japanese products abroad, especially in neighbouring Asian countries as purchasing power grows and consumers like the reputation for quality of Japanese goods.

Another factor at play in Japan, is that after a long period of under investment following the bursting of the asset bubble, much excess capacity has been worked out of the system.

‘Abenomics’ have also been a tailwind and therefore we view the recent political events favourably, with Shinzo Abe poised to become the country’s strongest leader in the modern era after his party’s landslide victory in the October parliamentary elections.

Japan Inc’s corporate earnings are expanding in general and the Nikkei-Markit Japanese manufacturing PMI increased to 53.8 in November from 52.8 in October. Manufacturing conditions have seen the strongest pace of improvement since March 2014.

A sector that has lagged in Japan in 2017 is the domestic banking sector, which provides a compelling risk-to-reward opportunity for investors. The Global Contrarian Fund is positioned to take advantage of this, with positions in the megabank stocks, including Mizuho, Sumitomo Mitsui and Mitsubishi UFJ, as well as some smaller local banks. 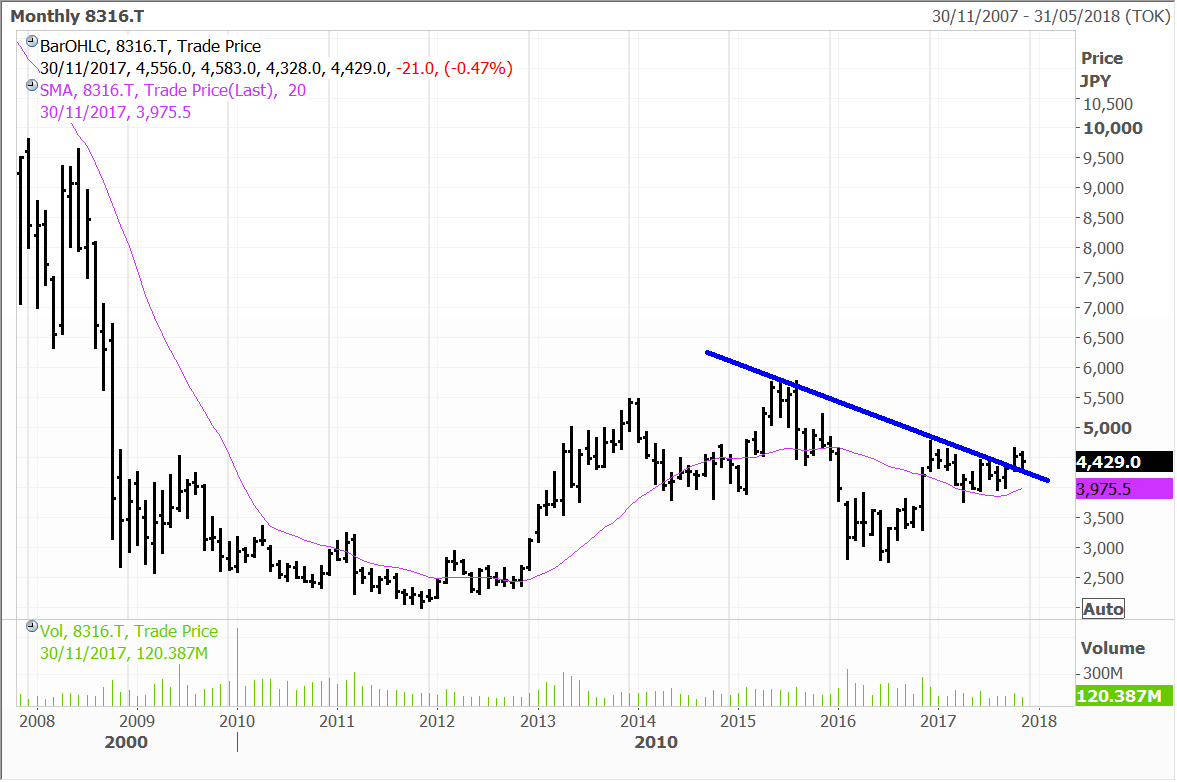 The Japanese banking sector has been hard hit by the implementation of NIRP (negative interest rate policy), leading to more pressure on already razor thin net interest margins for the Japanese banks. As discussed in the Daily previously though, Bank of Japan (BOJ) board member Hitoshi Suzuki recently said there is room to “debate a fine-tuning of the central bank’s yield curve control (YCC) policy”.

In the Daily I have several times espoused the view that the BOJ is likely to move its interest rate benchmarks to the upside and this will probably occur well before the 2% inflation target is hit. The cash rate is currently pinned at minus 0.1%, with the long term end of the yield curve at 0%. Any lift in longer term rates would boost the banking sectors margins materially and provide a substantial upward re-rating catalyst.

The megabank’s trade at undemanding valuations, strong capital positions and have weathered the tough environment well, by adapting to the environment. An improvement in the interest rate environment at home, coupled with expanding economic activity from lenders would be a powerful combination. This is especially as the banks are under-owned by international investors, who are underweight Japanese equities in general as well.

Mizuho Financial Group is an example, trading on less than 0.6 times forward book value and about 9 times the average earnings estimate. A projected dividend yield of almost 4% is attractive in the context of Japanese equities. Despite the challenging environment at home, the bank has grown book value per share in recent years and recently said it will trim headcount by about 19,000 over the next decade. That represents roughly a quarter of its workforce, so is a major statement.

When reporting its second quarter numbers earlier in the month, Chief Executive Yasuhiro Sato was quoted as saying, “Growing the top line is difficult in this global competitive environment, so it’s essential that we improve our productivity.”

Mizuho is not the only Japanese megabank to acknowledge the shifting landscape and that action needs to be taken. Sumitomo Mitsui and Mitsubishi UFJ have also outlined plans to use technology to cut costs and boost productivity.

Mizuho’s plans are aggressive though, with this due to relatively high expenses (i.e. its efficiency ratio – a measure of costs to income – is higher than peers). This provides some low hanging fruit to make improvements. It will not necessarily be as bad for Mizuho’s existing workforce as it sounds, because many older employees are expected to retire over that period anyway. Through technology, Mizuho should be able to reduce new hires and still provide similar or possibly superior service levels.

For example, Mizuho group has also developed a robot that can assist customers in branches with queries about their services. If the robot is put into widespread practical use, it could replace employees who currently do this work.

As part of its restructuring efforts, Mizuho will shutter around 100 branches over the next eight years or so, ending up with a footprint of around 400 branches.

The impact of NIRP can be seen in Mizuho’s recently reported interim numbers. Mizuho reported consolidated interim gross profits of ¥959.8 billion, down ¥129.8 billion or roughly 11.9% from a year earlier. 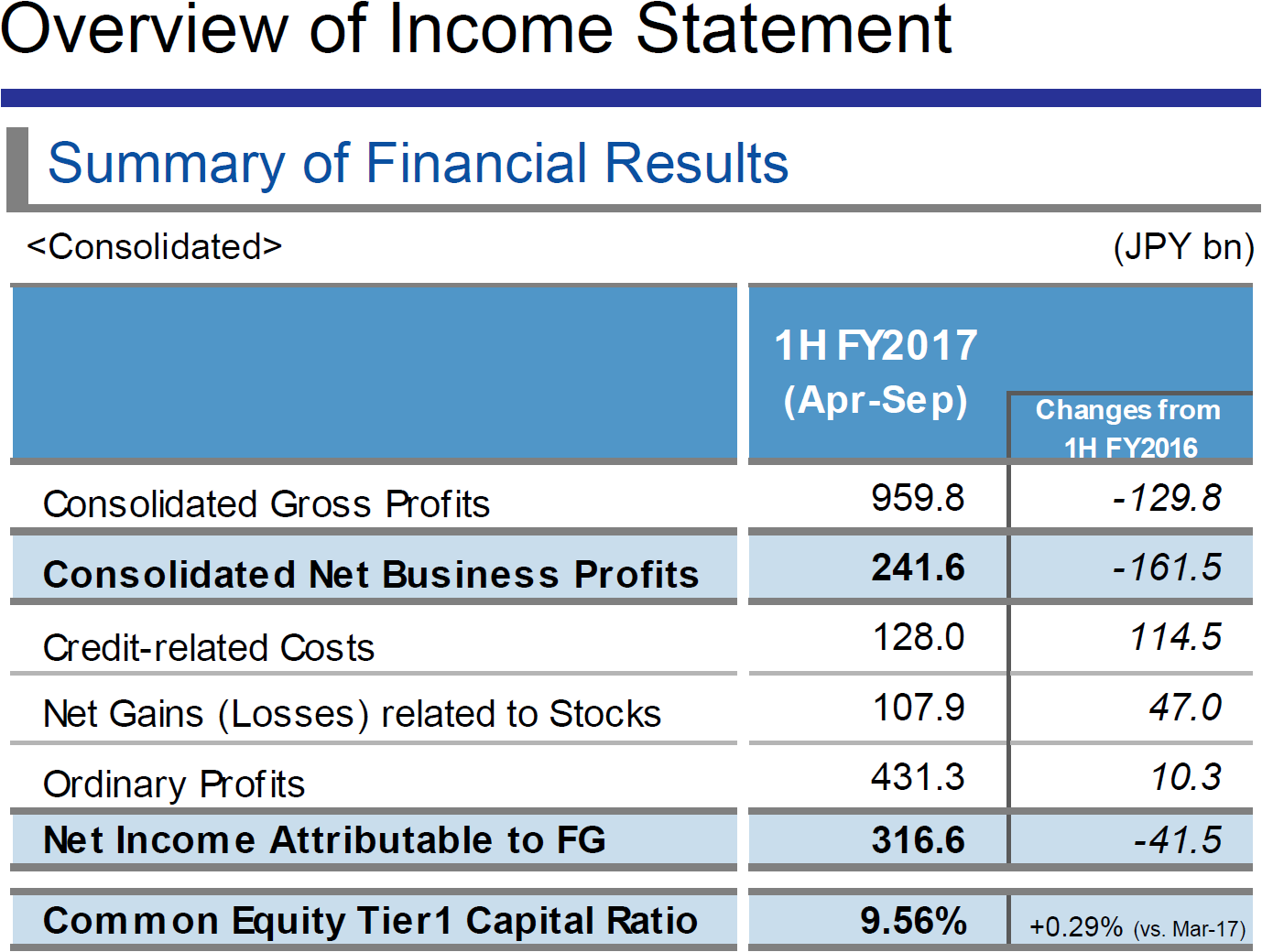 Much of the decline came from lower trading income which fell 38.3% year-on-year to ¥130.95 billion. Nevertheless, the low interest environment still had a substantial drag on the top line with net interest income down 6.6% to ¥407.42 billion. Combined, these factors accounted for the lion’s share of the decline.

The bulk of Mizuho’s gross profits came from Mizuho Bank (BK) and Mizuho Trust & Banking, with the remainder coming from their brokerage business, Mizuho Securities. On a non-consolidated basis, combined (BK+TB) gross profits from the two principal banking subsidiaries decreased ¥107.9 billion to ¥660.1 billion, with lower revenues from both trading (-¥57.8b) and customer groups (-¥50.0b).

The NIRP also led to lower interest margins, with domestic interest spread down 7 basis points year-on-year to 0.86%. Despite the negative interest rate environment, the bank still recorded deposit growth for the 1H17 which grew 4.5 percent of ¥5.9 trillion to ¥136 trillion.

Net income attributable to the owners of Mizuho Financial Group (the parent) decreased ¥41.5 billion, or 12% to ¥316.6 billion. Still, this represents 57.6% of the year-end target of ¥550 billion and Mizuho beat subdued expectations in the second quarter.

This is at the crux of our investment case for Mizuho and the other megabanks. The kitchen sink has been thrown at them, yet they are still delivering decent profits and have strong financial positions. And they trade at valuations that are not far off the lows initially seen after the introduction of NIRP. Expectations are set very low and a supportive policy move by the BOJ (something we believe might not be that far off) would see them re-rate upwards in a big way. Meanwhile, the downside appears much more limited. 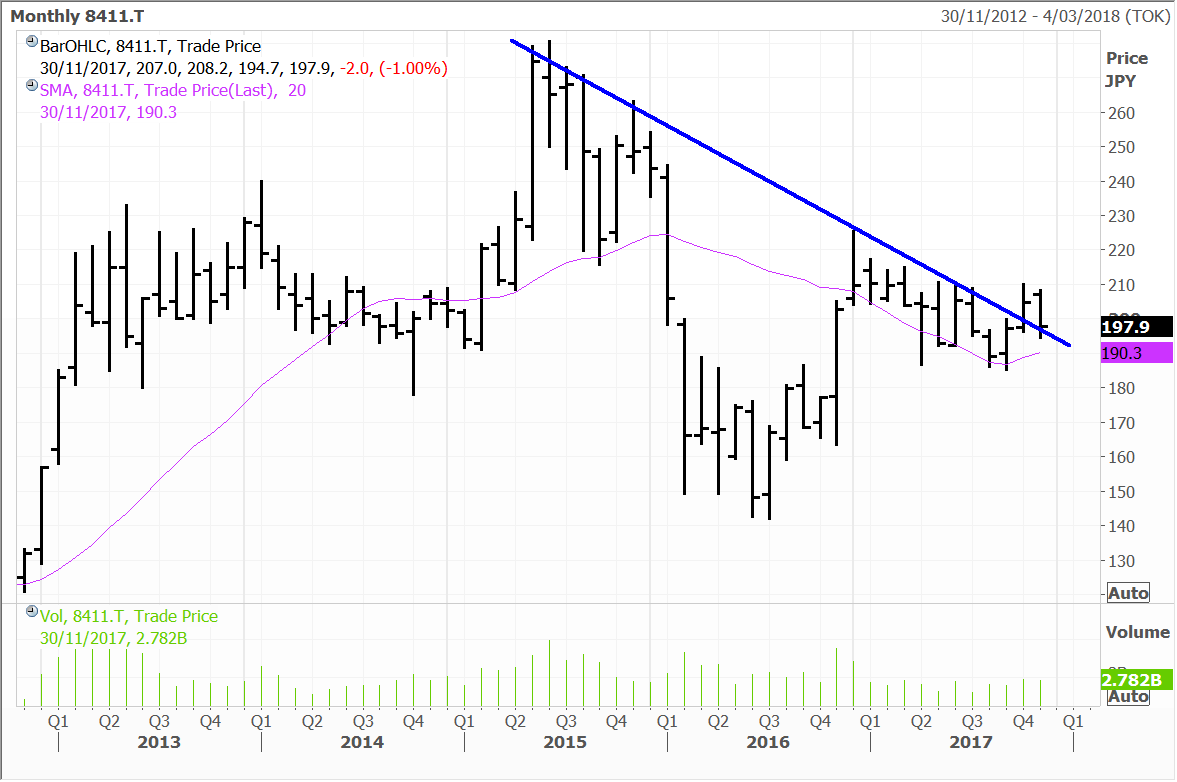