The Federal Reserve delivered the verdict from the last FOMC meeting of the year yesterday and raised interest rates by 25 basis points – as widely expected. However, what was revealing is that the Fed left its rate hike trajectory outlook for 2018 unchanged despite rising cost pressures in the economy and accelerating economic growth. As I wrote yesterday, I did not think that the Fed would do anything to rock the boat ahead of Jerome Powell’s appointment as the new Chair in January.

The markets liked the outcome of the FOMC meeting and the Dow Jones and Nasdaq rallying 0.33% and 0.20% respectively, while the S&P500 had a strong start but was sold off sharply to close down 0.05%. The DXY sank 0.5% while commodities and precious metals all rallied sharply. The Fed has held its line and continues to project three more rate hikes in 2018 and 2019, targeting 2.8%.

Japanese banking giant Mitsubishi UFJ was up 2.12% on Wednesday with Deutsche Bank reiterating its BUY recommendation and raising its price target on the stock to ¥960, pointing to a greater earnings contribution from its subsidiaries in the US and in Thailand. Higher interest rates and tax cuts in the US are likely to provide a tailwind for MUFG which derives around 25% of its consolidated net profit from the US.

In the company’s domestic market, conditions are looking more favourable with the economy heating up, record low unemployment and accelerating economic growth. While loan spreads have been static in the face of the BOJ negative interest rate policy, this could be rolled back in 2018. Governor Kuroda has alluded to this in recent speeches.

While MUFG has delivered cautious guidance, looking at net profit guidance versus actual results over the past few years show that results have overshot. We remain bullish on the Japanese banks which continue to trade on historically low valuations and we expect to benefit from rising inflation and interest rates. 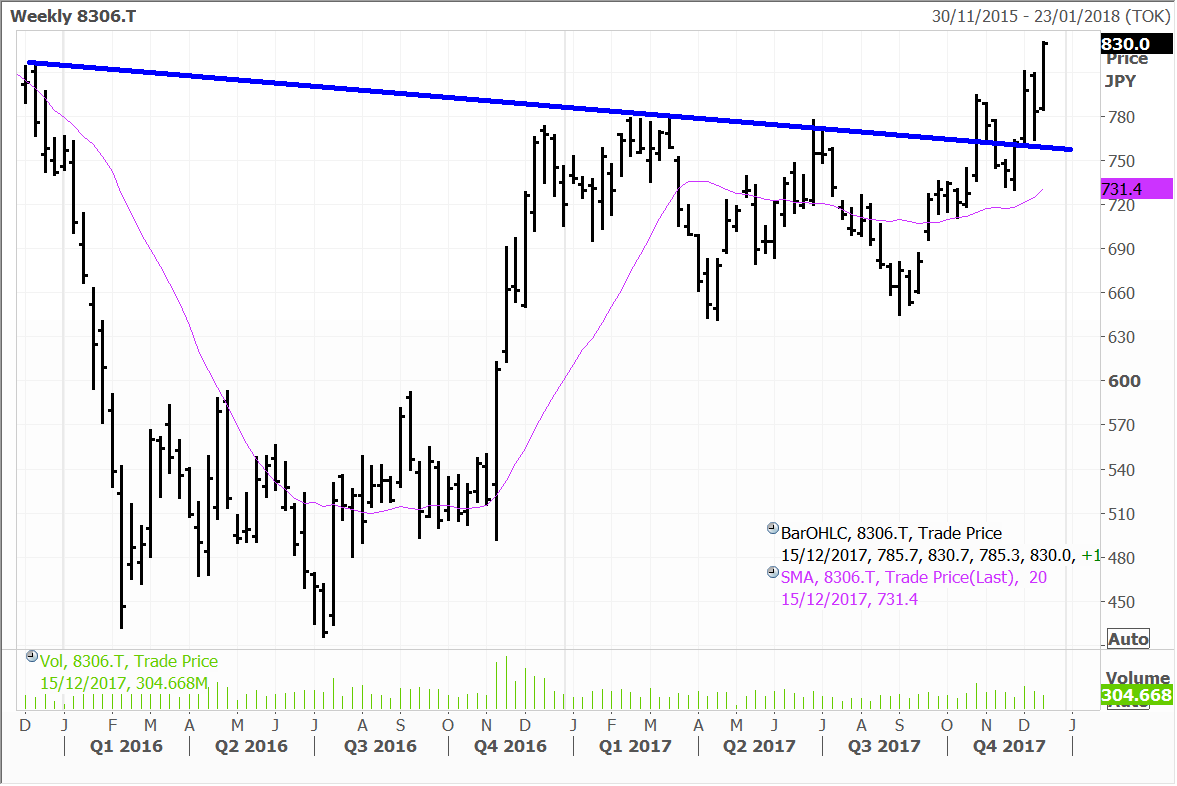 Czech carmaker Skoda, which falls under Volkswagen’s stable of brands has reported its best monthly sales ever in November with deliveries rising 17.5% year on year to 114,600. The strong growth has been broad based with double-digit growth seen in its markets in Europe, India and China, driven mainly by sales of its larger model cars and SUVs.

A new record in November was also announced for vehicles delivered under the Volkswagen badge, which amounted to 594,300 units and was up 4% year on year. A total of 5.64 million vehicles were delivered to customers worldwide from January to November. Volkswagen Brand Board Member for Sales, Jurgen Stackmann noted “at the end of the year we are seeing positive momentum in all regions” and that “more and more customers are switching to our e-models. Orders in Germany and Europe in November alone topped 3,000”.

Whilst the market reaction was muted, investors appear more focused on where the company has come from than where it is heading. Volkswagen is one of the lowest valued automakers in the world, but with “Dieselgate” now in the past, I see the stock outperforming. We hold VW in the Global Contrarian Fund and the European Managed Account portfolio. 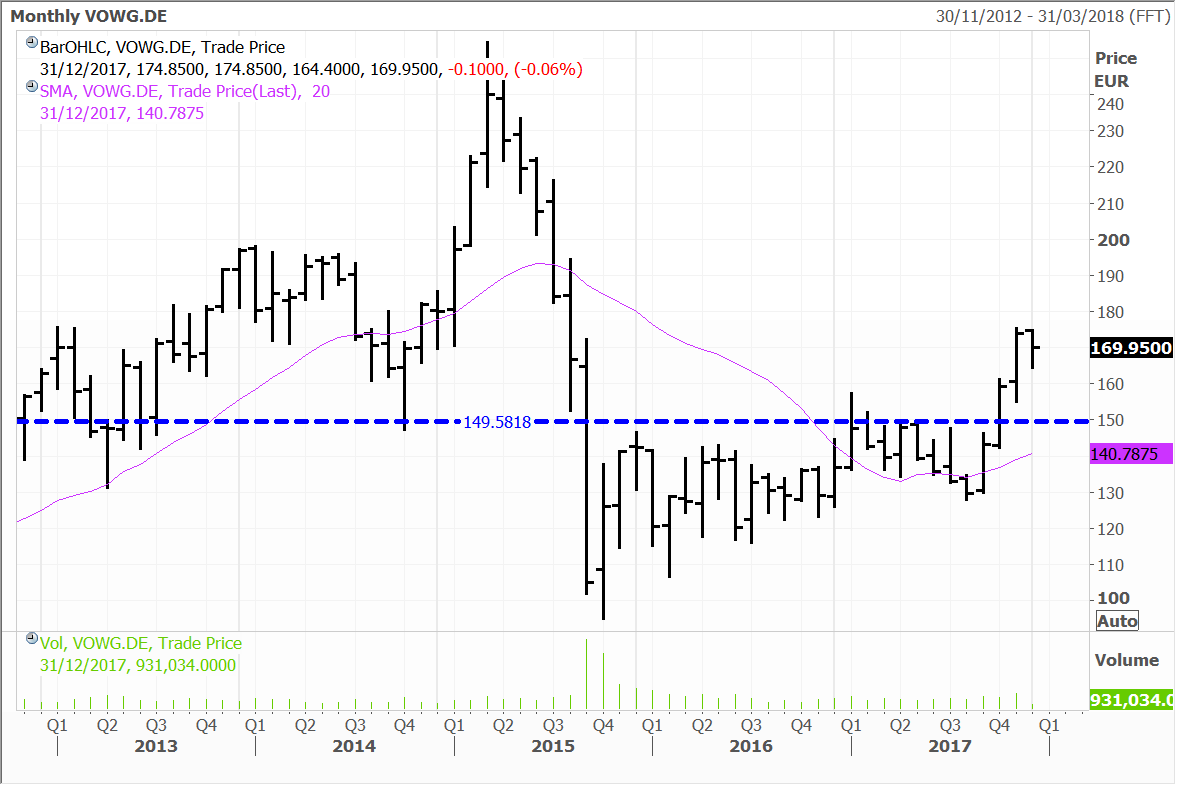 The positive momentum I wrote about in Hong Kong-listed casino operators continued Wednesday, with MGM China surging 5.4% in trading. Our other Macau casino exposures also made solid gains, with Sands China up 5.1% and Wynn Macau gaining 3.2%. All are companies are core holdings in the Global Contrarian Fund, along with the Global Opportunities and Asian portfolios. 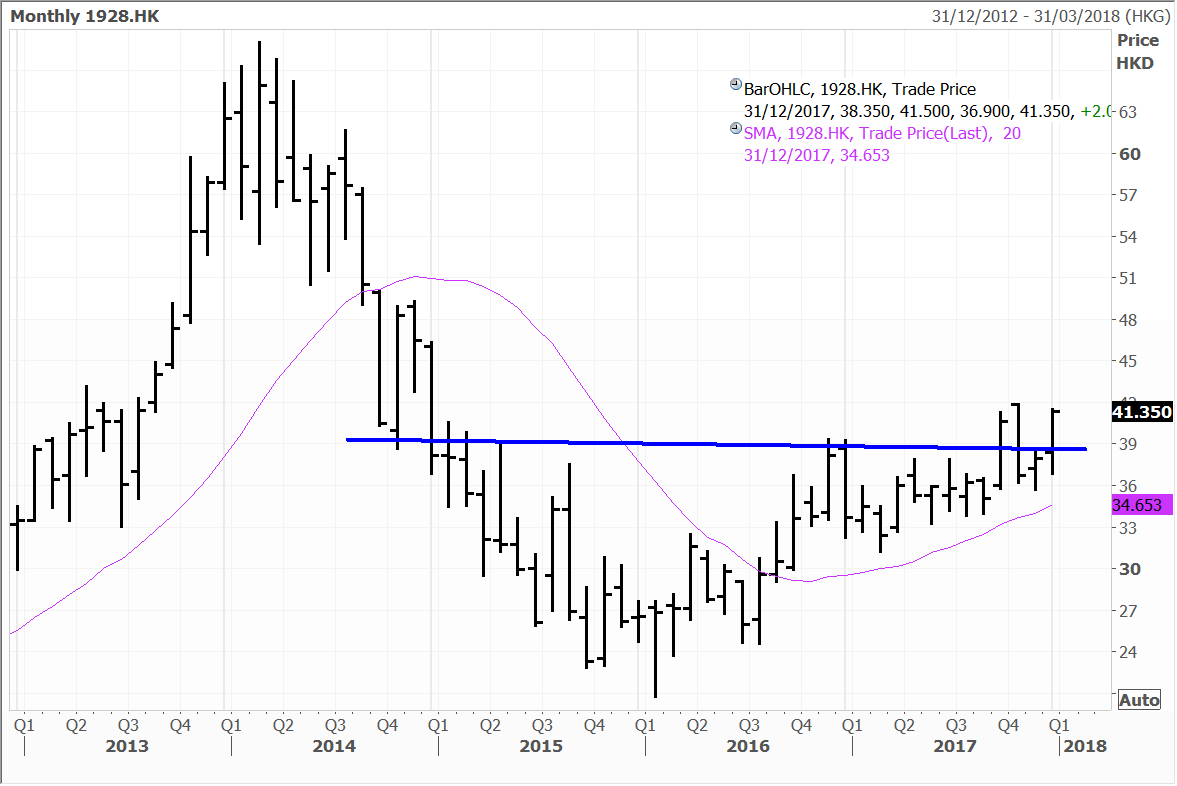 The Macau gaming sector has been given fresh impetuous from broker upgrades this week. But as I have written about on many occasions in these notes, all are enjoying a tailwind from the recovery in the Macau gaming market – the world’s largest.

Interest in MGM China is rising ahead of the company’s new property set to open on the Cotai Strip in Macau in late January 2018. This should help the company gain market share at a time the broader market is growing strongly. 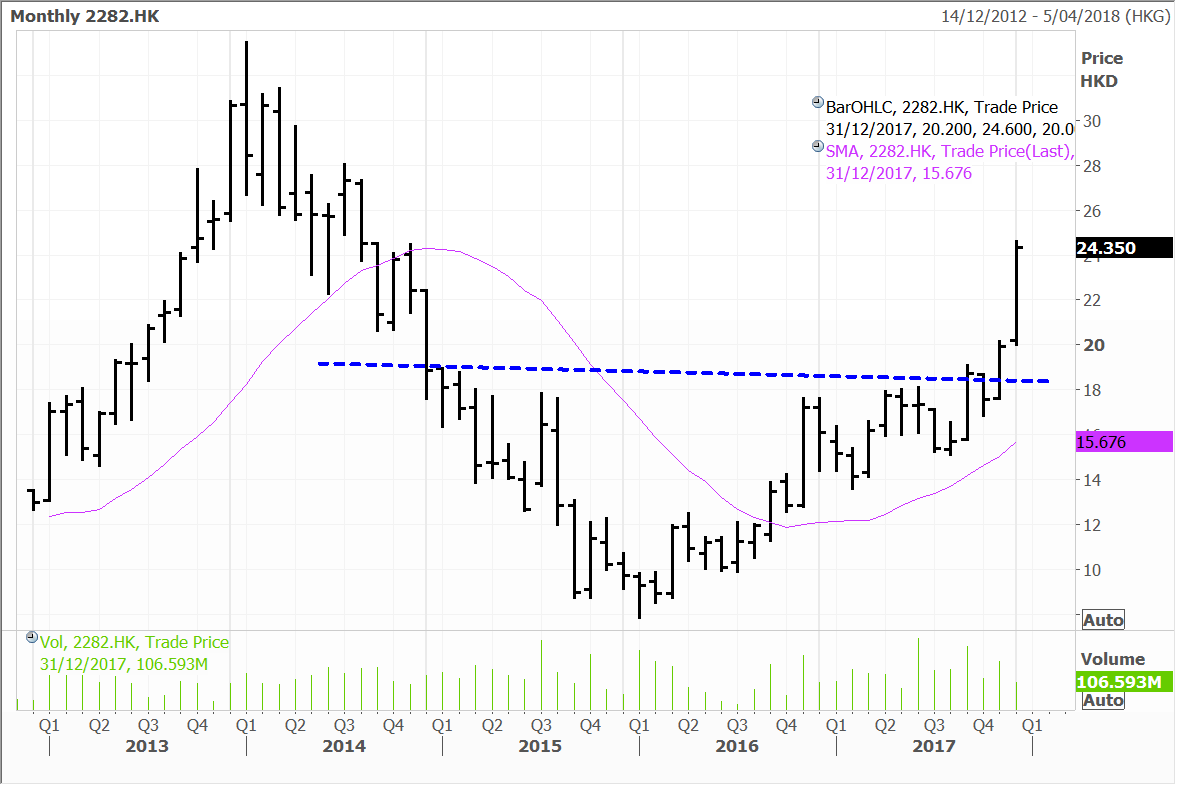 Stock in focus – On the Robotic Road

Leading Japan-listed automation and robotics manufacturer Fanuc, has crossed major milestone having sold its 500,000th robot. Mike Cicco, president & CEO, FANUC America said, “Automation and robotics are key drivers of manufacturing competitiveness,” and added, “More companies are using automation to overcome inefficiencies, lower costs, increase productivity, and gain market share. Having sold a half million robots is a key milestone for FANUC, and we’re looking forward to expanding our capabilities to keep pace with the growing demand for automation.”

In April 2017, Fanuc outlined plans to build a new factory slated to begin production in August 2018. The new factory will eventually increase robot production capacity from 6,000 to 11,000 units per month.

Fanuc has long been a leader in the robotics area and its distinctive yellow robots are a common sight in factories around the world.

A Fanuc industrial robot at work in an auto factory: 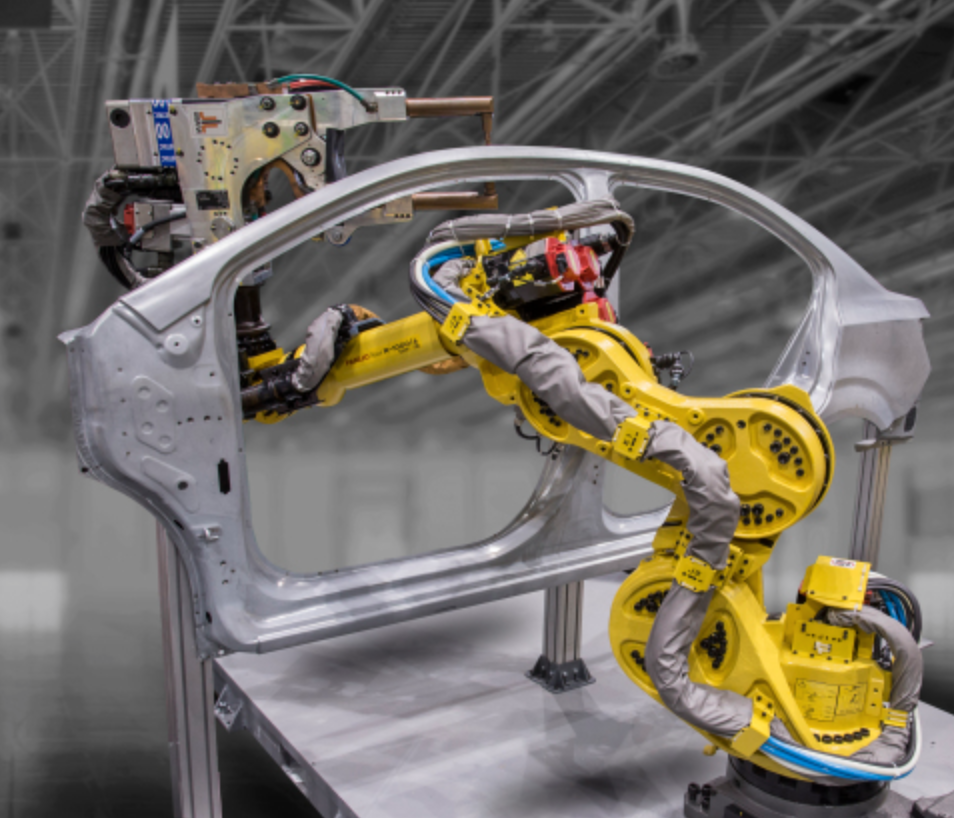 In a Bloomberg Business spotlight article earlier this year covering Fanuc, the Bloomberg writer Joshua Hunt wrote “Fanuc, a secretive Japanese factory-automation business, might be the planet’s most important manufacturer.”

Fanuc is a core holding in the Global Contrarian Fund, along with the Global Opportunities and Asian portfolios. 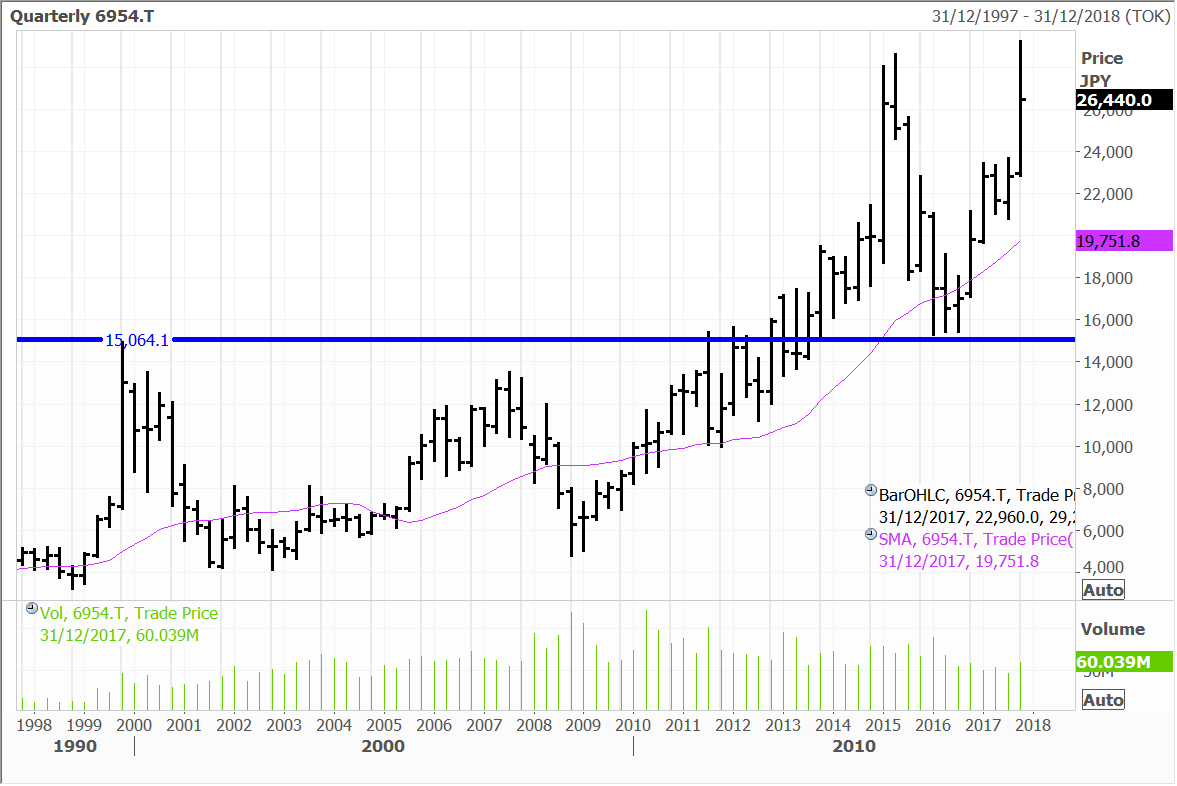 Automation and robotics in manufacturing and even service areas are strong long-term trends. Both the broader automation market and robotics are set to grow at a decent pace. Technavio Research estimated last year that the broader Global Industrial Automation Control market will grow at a compound annual growth rate (CAGR) of close to 8% from 2016 through 2020. This is a more mature market – where Fanuc is a leader via its Computerized Numerical Control (CNC) and servo motors.

Following a solid set of first quarter numbers, Fanuc maintained its momentum in the second quarter.  Demand from major export regions like East Asia (specifically China) continues to climb on the back of robust industrial production and the adoption of factory automation by manufacturers. In the second quarter (July-September 2017) the group reported consolidated net sales growth of 38.3 percent to ¥179.1 billion.

A change in the product mix and higher volumes led to a rise in gross profit margins. Operating incomes surging 55.8 percent to ¥56.9 billion. The solid performance in Q1 and Q2 was far ahead of management forecasts and prompted management to up their guidance forecast.

Operating margins for the quarter increased to 31.8 percent from 28.2 percent last year and operating margins have been recovering since hitting a cyclical low of 25.0 percent back in 3Q16.

Sony’s PlayStation 4 console has now rung up an impressive 70.6 million unit sales globally.  This is important as software sales for PlayStation are high margin and Sony is also using the console to push recurring income streams such as its PlayStation Plus membership and its cable alternative for streaming TV, PlayStation Vue. Sony is a core holding in the Global Contrarian Fund, along with the Global Opportunities and Asian portfolios, and has been a sterling performer in 2017. 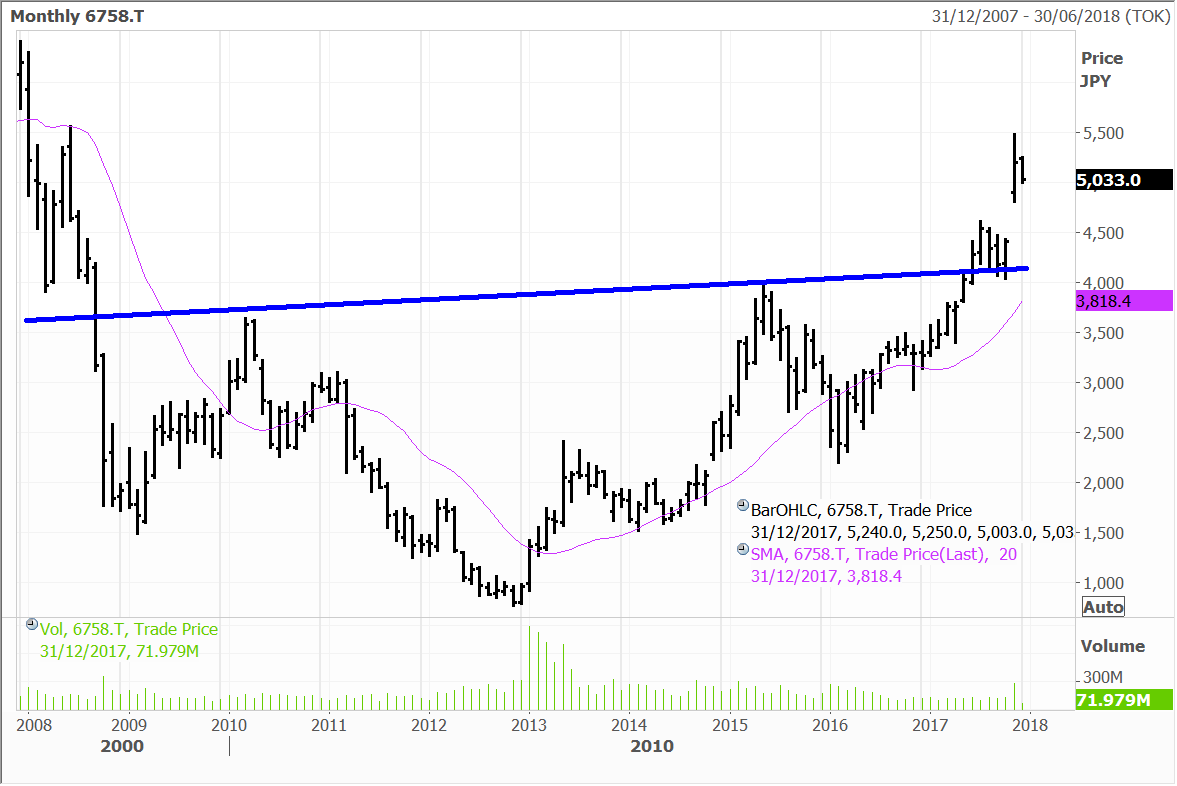 The robust PlayStation business, along with strong image sensor sales for use in smartphones and a general improvement across the company’s other segments resulted in Sony lifting its fiscal full year guidance to record levels for the year ending March 2018.

The strong console sales have supported software sales, with more than 617 million copies of PS4 games sold at retail stores globally and via digital downloads from the PlayStation Store.

Supported by the strong momentum of the PS4, PlayStation VR (virtual reality) headset sales have hit more than 2 million worldwide. Around 150 titles have been released for Sony’s VR headset, which works in conjunction with the PS4 and some 12.2 million VR game units have been sold at retail stores globally and through digital downloads on the PlayStation Store.