Mining stocks led the push higher on Monday, with sentiment boosted by upbeat manufacturing data out of China over the weekend. BHP and Rio were 1.3% and 2.2% higher respectively while South32 outshone both with a gain of around 5% to post a new record high.

We added South32 to the models around the lows early last year, and also bought the stock for the Fat Prophets Global Contrarian Fund. We have maintained an overweight holding since. South32 was seen very much as the ‘ugly duckling’ in the mining sector following the demerger from BHP, with perception generally being that the company had been loaded up with an unwanted collection of base metal assets in coal, manganese, alumina, nickel, and zinc amongst others.

Sentiment has certainly changed since with S32 up 250% since the demerger, just over two years ago. The company is well managed and offers strong leverage to robust commodity prices.  Zinc prices this week have hit the highest level in a decade on output concerns in China. 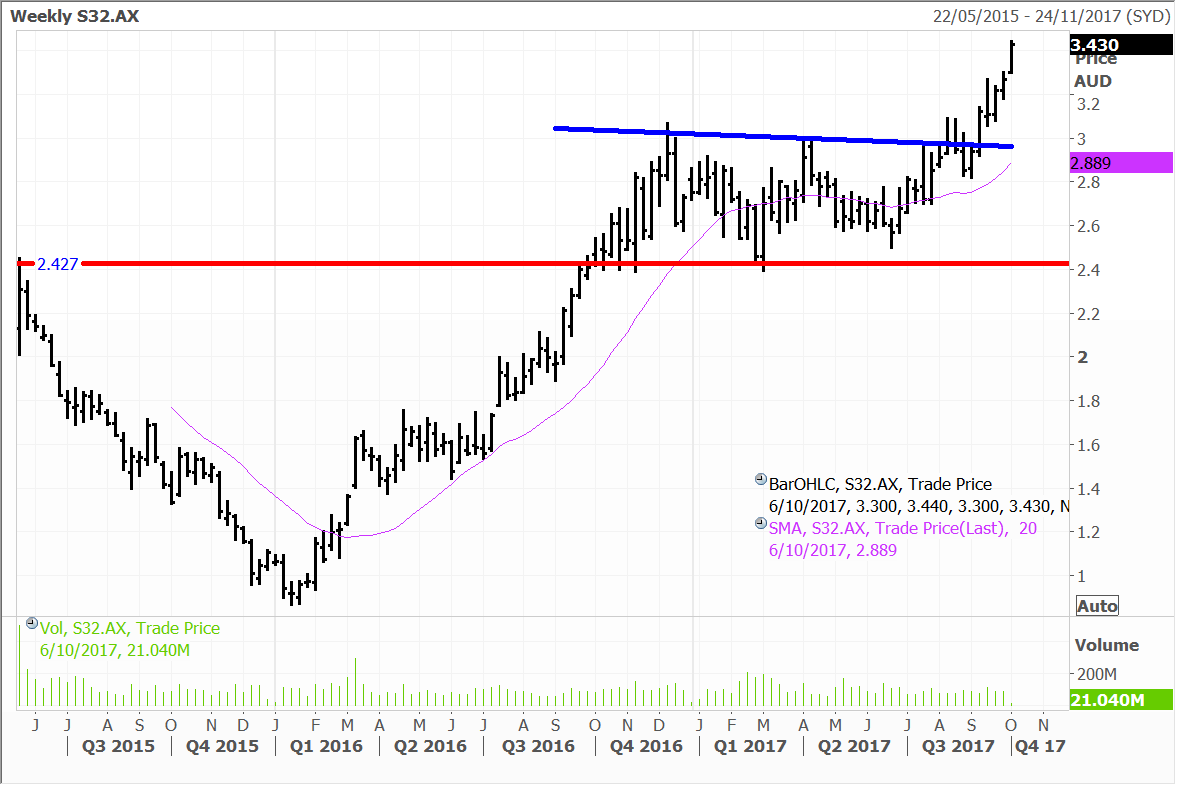 Robust cash flows have also meant that South32 now offers one of the most pristine balance sheets in the sector as well. The shoe therefore is now on the other foot, with the company in a strong position to make selective acquisitions, lift dividends, as well as engage in other capital enhancing initiatives.

We continue to favour high quality producers generally in the mining sector, and particularly those with rising output profiles, and falling cost bases. BHP and Rio are also certainly in this camp, and we continue to believe that as the earnings upgrades come through, there will be a rush by many institutional investors to address their relatively neutral positions.

Gaming gains prior to Golden Week

Casino gross gaming revenue (GGR) in the world’s biggest gaming hub of Macau grew 16.1% year-on-year to approximately 21.36 billion (US$2.6 billion) patacas in September, according to data released by the city’s Gaming Inspection and Coordination Bureau released over the weekend. That was above the median analyst estimate of 14% according to a Bloomberg polling. The Hong Kong market was closed yesterday, but we could see some support for our Hong Kong-listed exposures Wynn Macau, MGM China and Sands China in trading today. We hold core positions in Wynn Macau, MGM China and Sands China in the Fat Prophets Global Contrarian Fund and the Asian and Global Managed Accounts.

September marked the 14th consecutive month that gambling revenue in the region grew year-on-year. That marks an impressive turnaround from an earlier losing streak of more than two years of declines when Macau faced pressure from a slowing Chinese economy and a crackdown on corruption by the Chinese government. A special administrative region (S.A.R) of China, Macau – a former Portuguese colony – is the only part of China where casino gambling is legal and depends heavily on punters from the Mainland.

The 16% growth posted in September was a respectable result as there were likely some lingering impact from the landfall of Typhoon Halo in late August. Typhoon Halo was the most powerful Typhoon to strike Macau in a half  century and resulted in temporary suspensions of business at some hotels and casinos due to damage, power cuts and interrupted water supply.

Damage caused by the typhoon has resulted in a small delay for the opening of MGM China’s new casino in Cotai and an upward revision in the project’s budget. According to a statement from the company, the new resort will open on 29 January 2018. The company had previously targeted the fourth quarter of 2017. The budget was also revised upwards roughly 4% to HK$27 billion (US$3.5b) due to some damage sustained. The budget excludes land and capitalised interest.

Although the delay is frustrating, especially as it is not the first delay, MGM has now set a hard date for the opening and these are rarely changed. If the opening of the property is anywhere near as successful as the parent’s opening of its National Habor casino in Maryland in the United States in December 2016, shareholders should be happy next year. 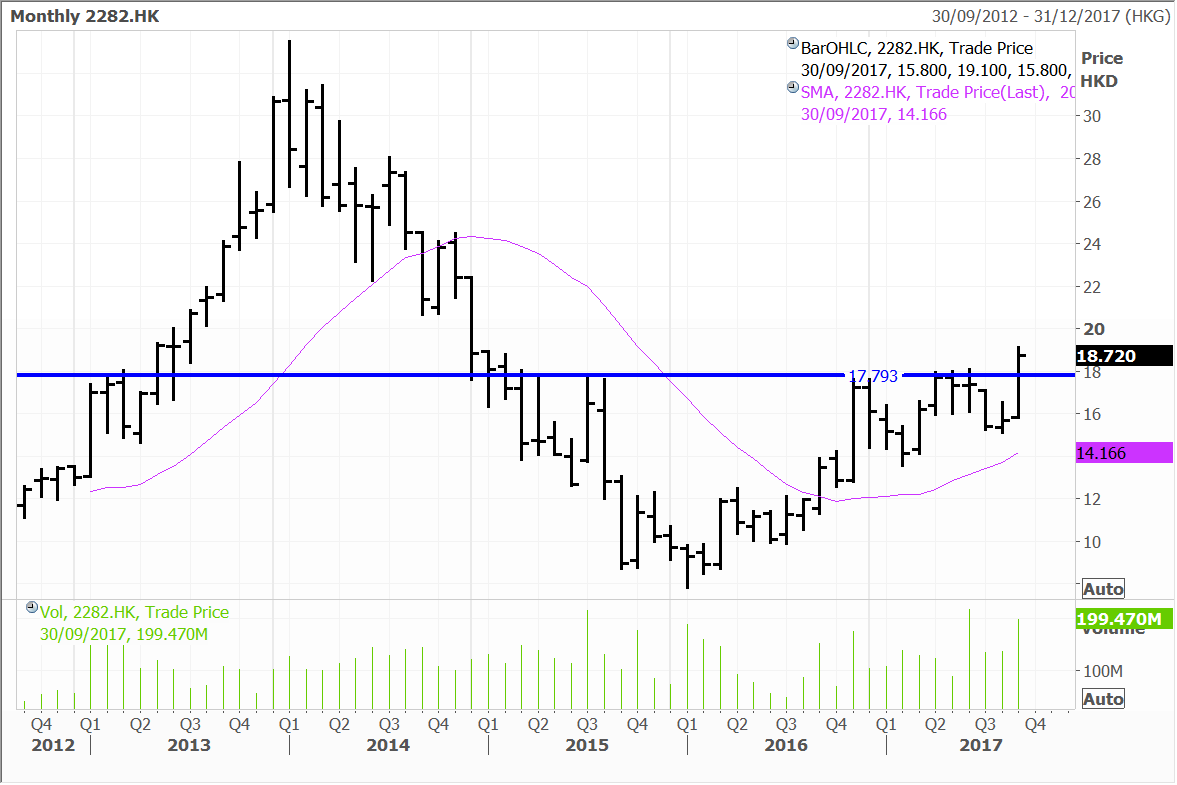 For the third quarter of 2017, Macau gambling revenue was roughly 67 billion patacas, up 21.8% from the comparable period of 2016. And year-to-date Macau’s GGR tally at the end of September of 193.38 billion patacas represents an increase of 18.8% from the first nine months of 2016.

As we have discussed in the Daily previously, with Macau gambling revenue now having linked together more than a year of positive gains, the growth comparisons are going to be get tougher over the rest of the year. The opening of Wynn Macau’s (late August 2016) and Sands China’s (September 2016) new resorts last year also add to the challenge.

Still, given the cumulative tally and year-to-date gain, we still expect to see 2017 finish with a low double-digit increase in gaming revenue versus last year.

China is the largest single source for visitors to Macau and this trend is set to accelerate in upcoming years in our view due to growth in the number of Chinese travelling, new infrastructure build-out and more coming attractions in Macau. This week should see strong visitor traffic to the region due to it being China’s national ‘Golden Week’ holiday period, with hundreds of millions of Chinese holidaymakers ‘on the move”.