In Australia, the market added 0.25% on Tuesday with the ASX200 closing the session at 6013. Rumours over the Westfield swoop have proven well founded, and put a light under property stocks. Resource stocks were well bid on the back of commodity price strength, while ANZ was the standout in the banking sector after announcing the sales of its life unit to Zurich Insurance for $2.85 billion. We are overweight ANZ relative to the rest of the sector in the Concentrated Australian Share and Income managed account models.

It certainly has been a few days for Sir Frank Lowy who was knighted earlier in the week, and is closing out a final chapter in the ‘rags to riches’ story in relation to the shopping centre group he co-founded back in the 50’s. It certainly has been a tremendous journey for a man who survived the Holocaust, and one that no doubt will be told on the big screen at some point.

In looking at the deal, I think it is clear to me that it probably wouldn’t have happened had Westfield not demerged its Australian assets into Scentre Group a few years ago. Our analyst team remarked at the time that this could open the way for an offshore bid, and so it has proven.

The announcement overnight of major Paris headquartered European shopping Centre REIT Unibail Rodamco (UNBP.AS) making a takeover offer for Westfield Corp (WFD.AX) at a 15% premium creates one of the largest shopping centre companies in Europe with assets of £61bn of assets.

The cash and scrip bid for Westfield has the blessing of Frank Lowy and the Westfield board and reflected a price of A$10.00 per WFD share based on the approximate closing price of Unibail yesterday. 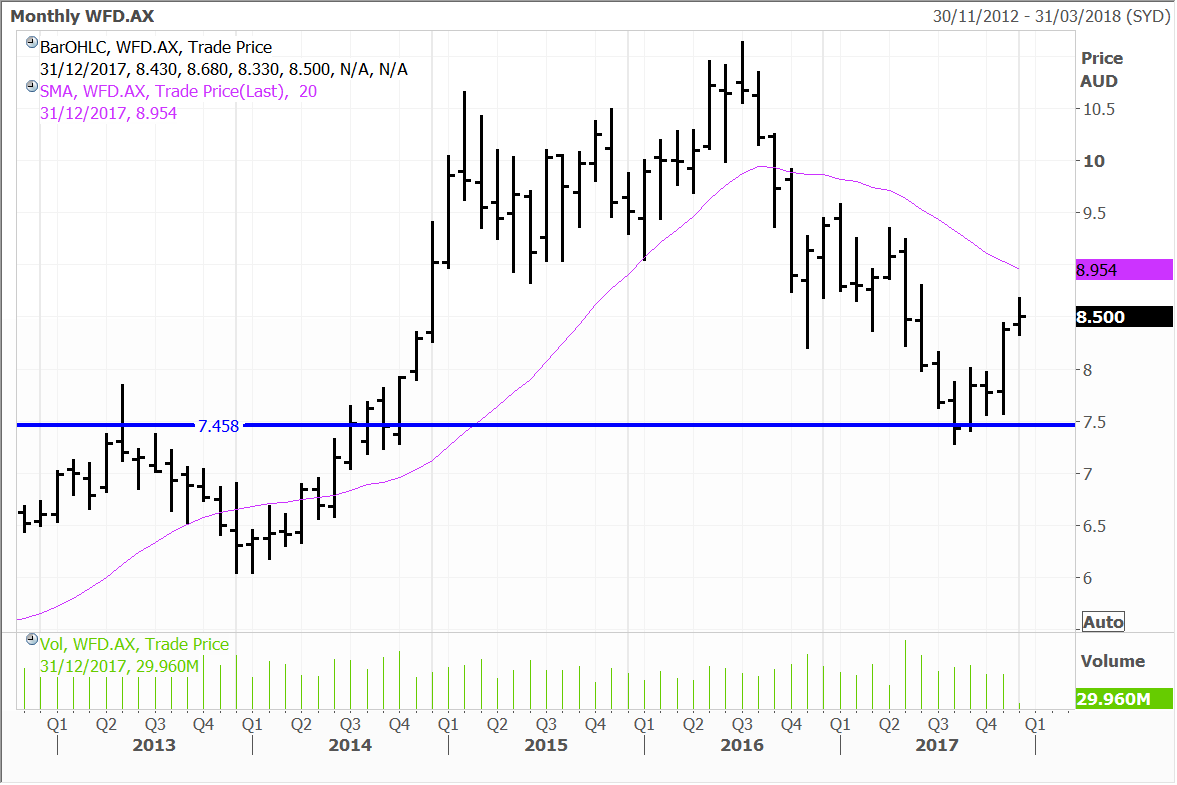 In terms of the motivations, there have been suggestions that there are some similarities to Rupert Murdoch calling time, with the Disney deal, and as disruptive forces take hold. Maybe it is also an age thing with both Frank and Rupert well into their 80s. The reality is though that Westfield’s US/UK assets in question have already been through the “Amazon” effect, unlike in Australia where the disruptive juggernaut is just getting started.

This is also why we probably wouldn’t have seen a tilt without the demerger. The returns though are getting harder to come by for the international unit, and this is putting a strain on capex. It therefore may be less a case of “if you can’t beat ‘em join ‘em”, but more like ‘getting out at the top.’

Speaking of tops, we believe there is some way to go yet before we see this in the commodity price spectrum. Demand remains robust, underpinned by China, which continues to transition to still high levels of sustainable growth, evidenced by another positive data point (loans and vehicle sales) yesterday.

Supply also remains constrained, and this is highlighted by any interruptions or major production blips – zinc leapt yesterday as Glencore disappointed on 2018 output forecasts. After the recent brief corrective pause, copper prices were also up 1.5% yesterday. Inflation will also stoke the embers, and we have been saying this for some time.

As I wrote about Goldman Sachs above, we are also on the same side of the fence. The bank is certainly seeing eye to eye with our own views, and also reinforced the point I have made about the knock on impact to prices following lower capex through the mining downturn. GS wrote that “For copper, while healthy supply growth is expected in 2018 and 2019, the market is now at the end of an expansion boom as capex investment contracted sharply after the commodity selloff in 2014. That implies that mine production is likely to decelerate after 2019.

We completely concur, and continue to believe that the earnings upgrades coming through will push the resource sector much higher next year.  We continue to favour the high quality producers. On this note there are reports that BHP is accelerating plans to spin off or sell its underperforming US shale unit.

BHP overpaid for these assets prior to the GFC but I am not sure the timing is right to offload them now, despite various shareholder activist pressures. We see the energy complex going much higher, so hopefully the company can maintain some discipline on the sell side. 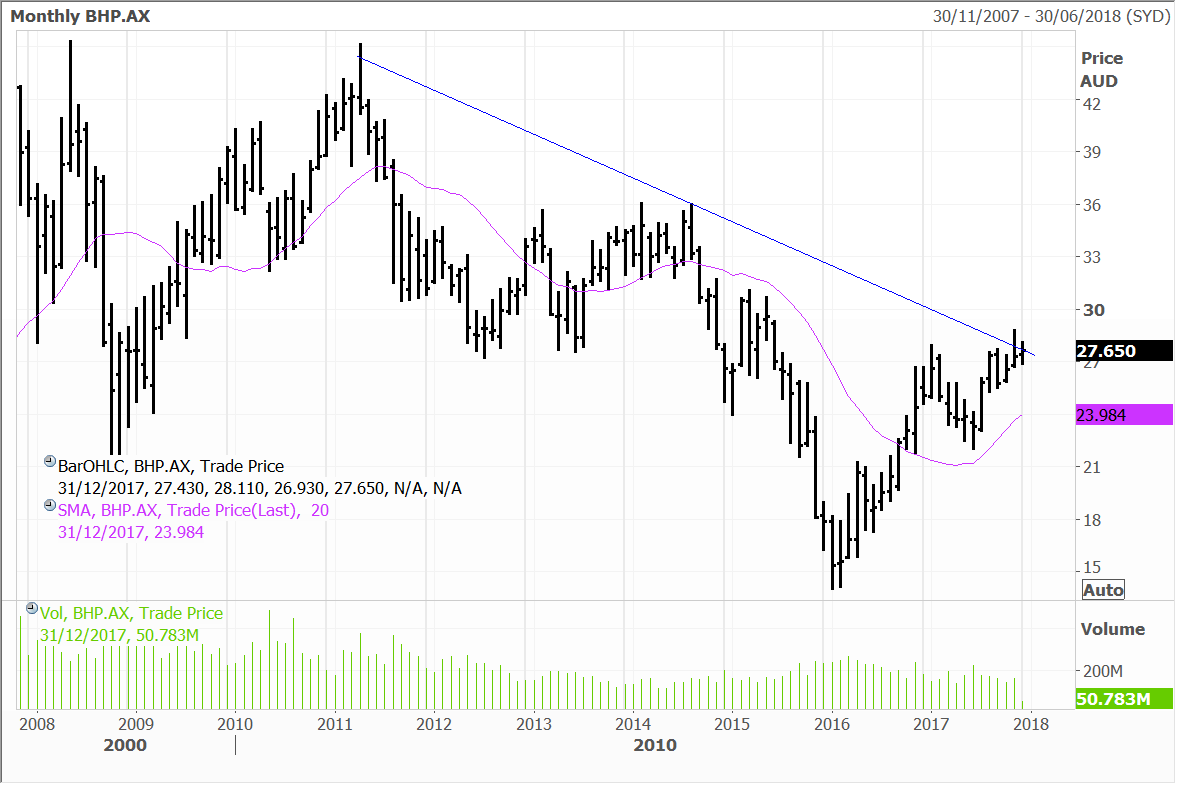 Shares in Spanish lender Bankia were down 2.4% yesterday with Spain’s Government bailout fund selling down a 7% stake in a share placement for a total value of 818.3 million euros. The sell down will increase liquidity in the stock which is positive. Economy Minister Luis de Guindos said last month the government, which owns 67% of Bankia, is planning to sell further stakes as soon as possible. Bankia is held in the Contrarian Fund, Global Opportunities and European models. 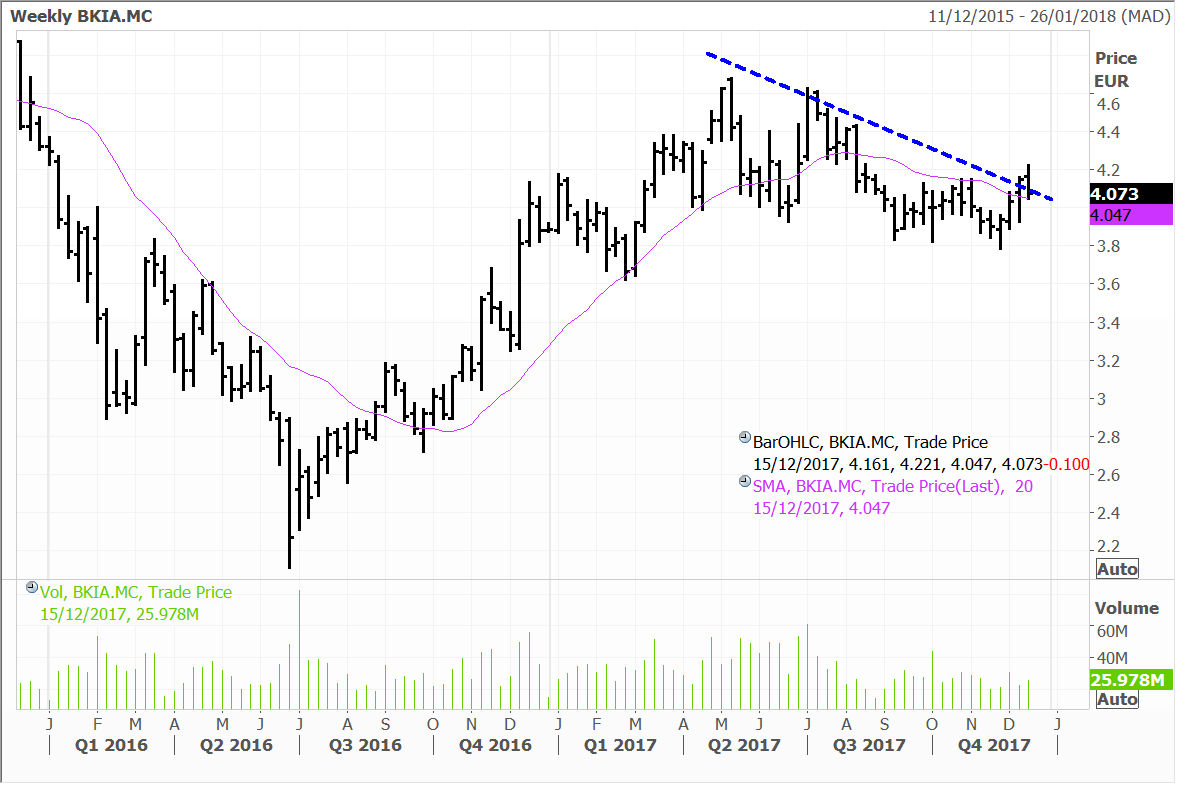 A new dawn for Japanese Megabanks?

Japan-listed shares of Japanese megabanks Mitsubishi UFJ, Sumitomo Mitsui and Mizuho were all solid gainers in trading yesterday, rising 2.25%, 1.99% and 1.43% respectively. All are holdings in the Global Contrarian Fund, along with the Global Opportunities and Asian portfolios.

Sumitomo’s gain came on the back of a 2.27% lift in Monday’s trading, as it was reported the bank’s brokerage unit was seeking to poach US teams to bolster its investment banking division in North America. Japanese banks have been bulking up their overseas presence over the past decade to offset some headwinds at home.

The Japan banking sector has lagged this year, setting up a compelling risk-to-reward opportunity for investors. A headwind for the sector has been the implementation of NIRP (negative interest rate policy) from early 2016, leading to more pressure on already razor thin net interest margins at home for the Japanese banks.

The Thomson Reuters Japan Financials index has been in a basing trading range for some time, but this could be about to change in 2018 – especially if Japan’s interest rates begin to rise and the yield curve steepens. 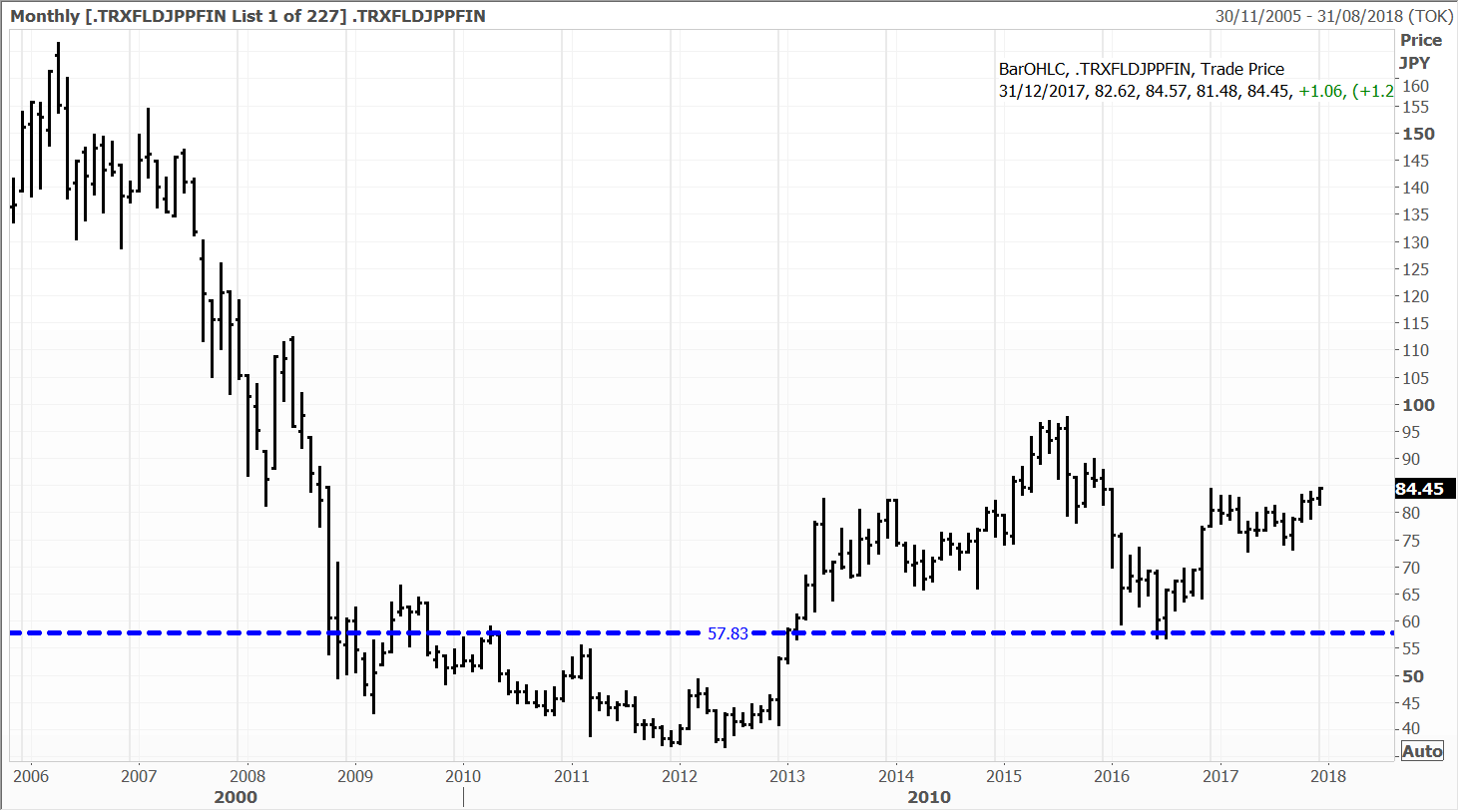 However, as discussed in the Daily previously, the flat interest rate curve domestically is likely poised for a change in the not-distant future, providing a much friendlier environment at home. And the Japanese economy has become a healthier beast under Prime Minister Abe. It is currently ticking over nicely, with GDP expanding for six straight quarters, the first time the economy has grown that long without a contraction in over a decade.

Japan’s corporate earnings are expanding in general and the Nikkei-Markit Japanese manufacturing PMI increased to 53.8 in November from 52.8 in October. Manufacturing conditions have seen the strongest pace of improvement since March 2014.

Unemployment is at multi-decade lows, while persistent wage and price deflation has eased, although the Bank of Japan would like to see stronger inflation flow through. There is growing demand for Japanese products abroad, especially in neighbouring Asian countries as purchasing power grows and consumers like the reputation for quality of Japanese goods.

Bank of Japan (BOJ) board member Hitoshi Suzuki last month said there is room to “debate a fine-tuning of the central bank’s yield curve control (YCC) policy,” providing a decent hint that the BOJ could shift its interest rate benchmarks to the upside well before the current 2% inflation target is hit. Any lift in longer term rates would boost the banking sectors margins materially and provide a substantial upward re-rating catalyst.

Japan’s megabanks are among the cheapest globally on a price to book ratio basis. Sumitomo Mitsui Financial Group (SMFG) trades on around 0.65 times book value per share and as I touched on yesterday, Morgan Stanley recently highlighted as their highest conviction Japanese bank stock.

SMFG managed to grow both its top and bottom lines in the first half of its fiscal year due to end March 2018. Under Japanese GAAP, at the consolidated level ordinary income was up an impressive 14.4% year-on-year to ¥2.75 trillion. Ordinary income includes both interest income and non-interest income (i.e. trust fees, fees and commissions, trading income, other operating income etc). Interest income was up an impressive 18.8% to ¥1.08 trillion, with growth driven by the international business and credit cards. 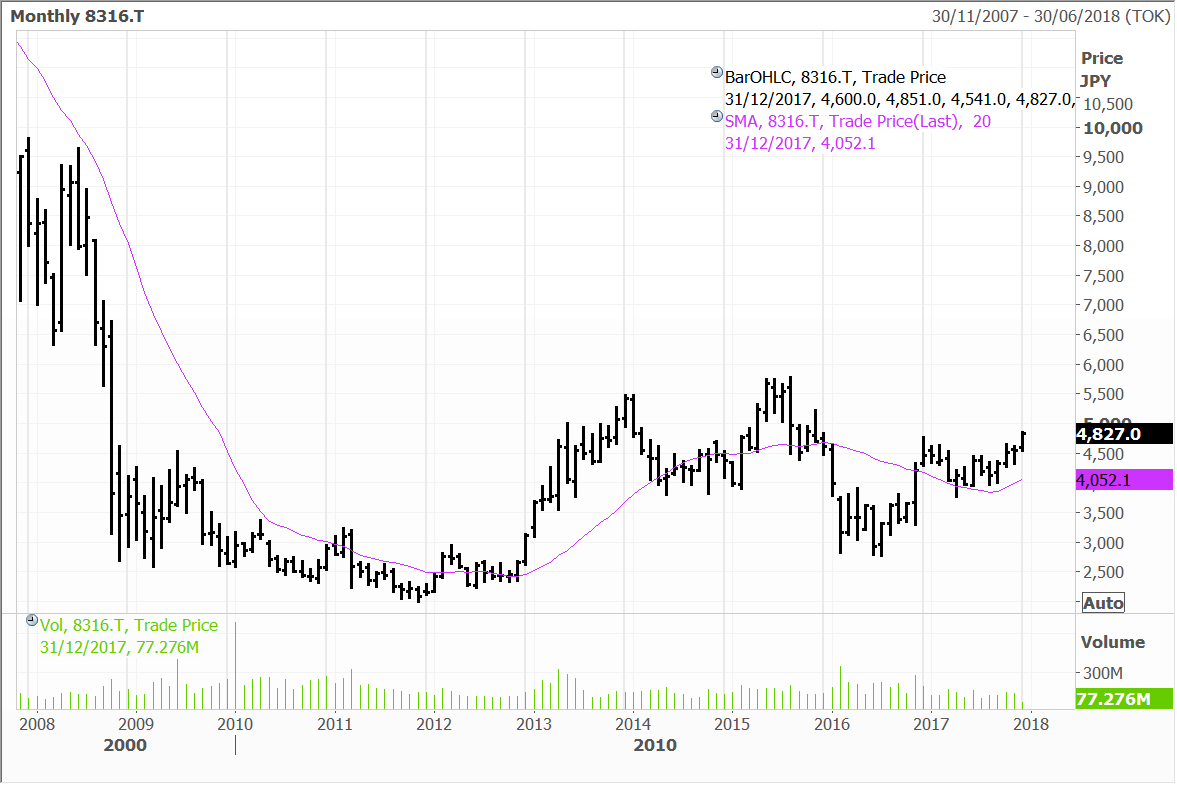 Consolidated gross profit rose ¥48.3 billion, or 3.4% to ¥1.47 trillion. The group kept a lid on expenses and has the lowest overhead ratio of its major peers in Japan. Equity gains from affiliates were also important contributor to the bottom line. The Bank of East Asia, recorded substantial gains in the sale of its stake in the corporate services provider, Tricor and a rural bank subsidiary. All in all, consolidated net business profit rose 9.7% to ¥601.3 billion. 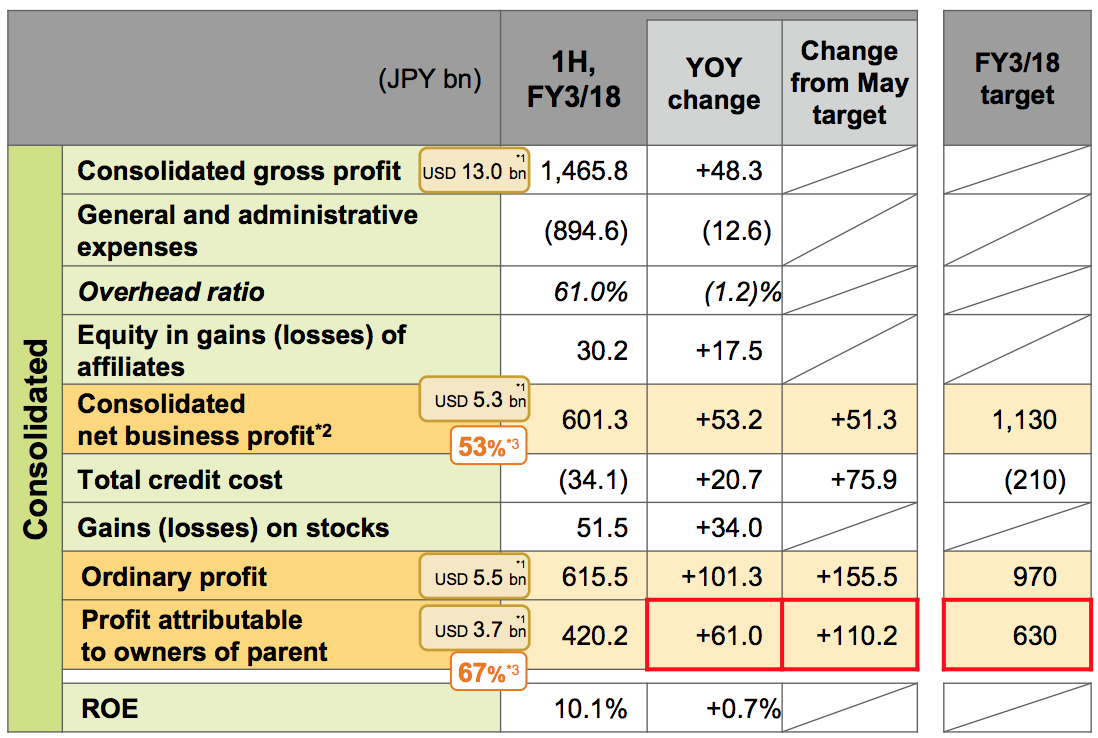 Earnings per share increased 13.4 percent to ¥297.94, while return on equity for the period came in at 10.1 percent and was far above management’s targeted 7-8%.

The bank is making solid progress with their “SMFG Next Stage” plans, targeting ignored market segments (mid-sized enterprises among others), building up their investment business, and international expansion.

Total loans expanded 7.2% year-on-year to ¥76.22 trillion with overseas loans comprising almost all the loan growth. The pace of deposits trailed slightly, up 6.8% year-on-year to ¥89.1 trillion. The group improved asset quality by reducing exposure to at-risk sectors. The non-performing loan (NPL) ratio dipped from 1.03% to 0.91%.

The balance sheet is solid, with the common equity tier 1 (CET1) ratio (on a fully loaded, pro-forma basis) increasing 120 basis points year-on-year to 13.1%. That is well above the internal target of 10.0% and the lower regulatory minimum. SMFG like the other Japanese banks is likely holding off returning more capital to shareholders until more regulatory insight is provided.