US markets closed higher on Wednesday with the Dow Jones rising 0.45% to 21,711, and the broader S&P500 edging up 0.03% to 2,477. The Nasdaq pushed further into record territory as well, with shares in chipmaker AMD hitting a 10-year high on the back of strong quarterly earnings. Overall the earnings season is going strongly, and this is providing further impetus for a market where ‘up’ continues it seems, to be the path of least resistance.

Also, underpinning sentiment as well is an accommodative central bank, and the Fed delivered no real surprises on Wednesday, leaving interest rates unchanged, and stating that it was on track to continue a slow pace of monetary tightening. Officials also noted that the $4.5 trillion in bond holdings would be addressed and the Fed would “begin implementing its balance sheet normalization program relatively soon.” The balance sheet ‘issue’ therefore has been kicked down the road to the next meeting. 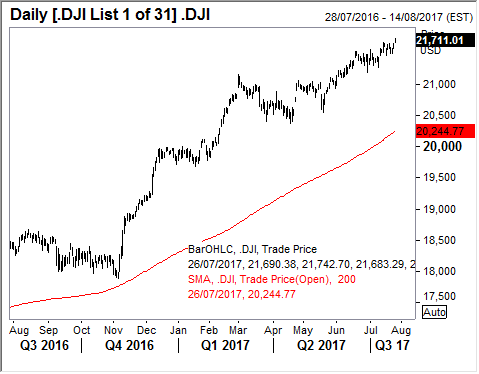 I will also be looking for a good quarterly result from Baidu (which we hold in the Global Contrarian Fund as well in the GO, North American and Asian model portfolios). The company’s transaction services and online video streaming businesses have been doing well, and the top line has been growing strongly. Margin improvement will be in focus, but what will be very key in my view, with be further details about the company’s AI strategy. The shares were up 2% on Wednesday, and clearly there is some anticipation. 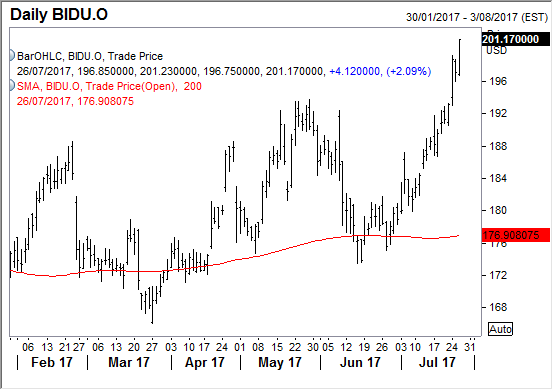 Shares in Wynn Resorts and Wynn Macau did however see some selling after the company announced that walk-in business in Macau fell 9% during the second quarter y-o-y. Wynn Resorts fell 5%and Wynn Macau was off 4%, despite the fact that overall the numbers topped expectations. The company’s VIP operations performed strongly, and saw a 35.3% year-over-year increase in table games turnover.

I don’t think the mass market numbers are overly concerning, or that they signal a change in the recent up-trend. As noted by Steve Wynn, a significant amount of construction in the area likely had a short-term impact on walk in traffic. And this in itself highlights the expansion which Macau continues to see. Some profit taking in the shares after a strong run should also not be unexpected. 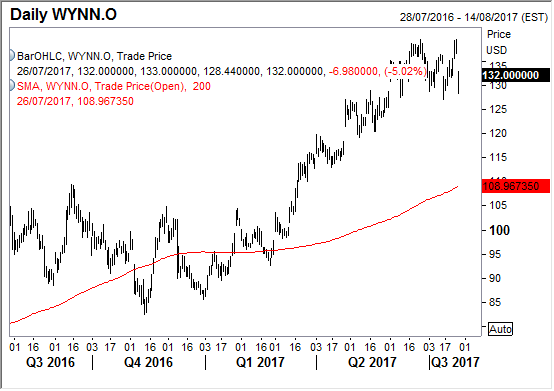